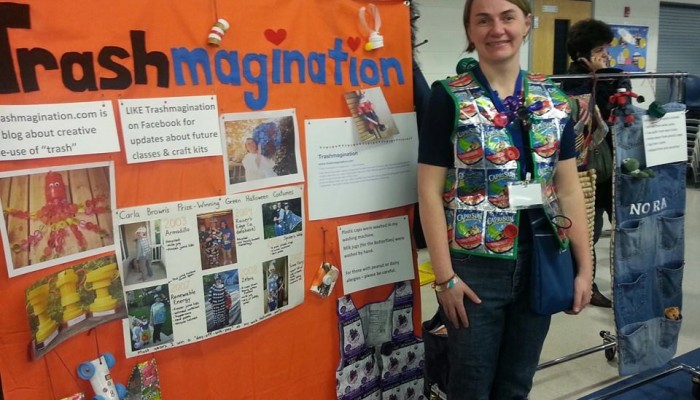 When I woke up this morning, I kept hearing the song Brave by Sara Bareilles in my head:

I knew it was going to be a great day.

Today was a great day for Trashmagination. Today we hosted hundreds of people at the first Maker Faire in northern Virginia and we made two activities – milk jug butterfly suncatchers (invented by Filth Wizardry) and caterpillars made from plastic caps, or “cap-erpillars.” I have been gathering milk jugs from my neighbor’s recycling bins and drilling plastic caps for three months now, so it was the culmination of many hours of work.

There were so many amazing moments in this day!

A few weeks ago, I wrote a blog about how I was going to do this, and Louisa commented on the blog and said she would be happy to help. Louisa and I are not even sure how we met, we think at a Mommy-and-Me event 10 years ago? But our life circles have criss-crossed here and there. She brought such a spirit of joy to this day. Even though we were non-stop tying strings for those cap-erpillars, there would be little moments where she would say things like, “You really are doing something extraordinary here, you know?” and I would think for a moment that maybe we were. 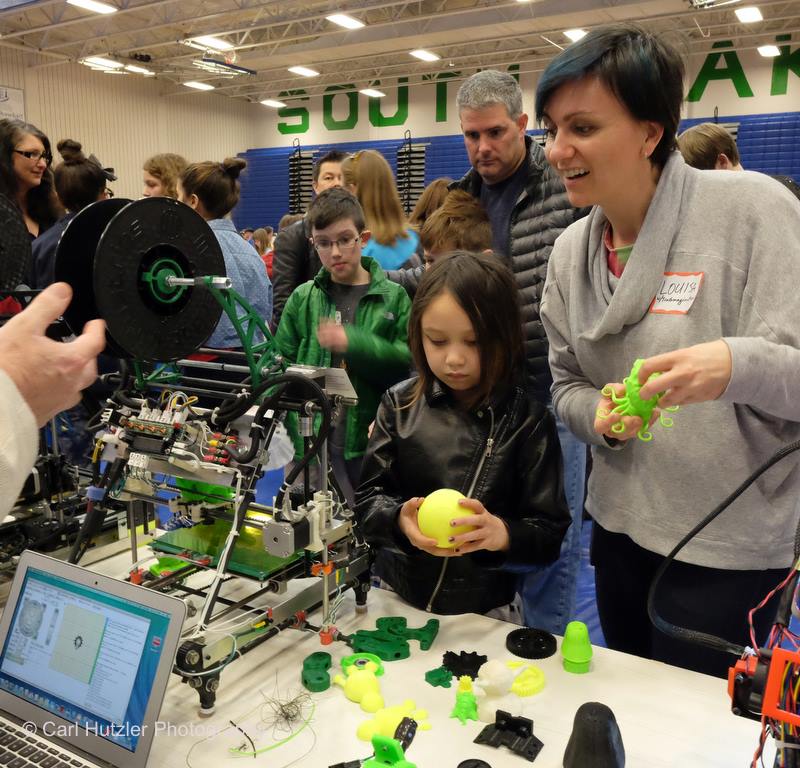 It was crazy for me to think I could manage this station by myself for five hours, and I’m so glad that I was crazy enough to not worry about it, and just know that Louisa would come. There are so many things I want to do, and I worry whether they are not smart, and so I don’t do them. But Louisa made me believe that sometimes you gotta just do them, and people will think you are doing something worth supporting.

And for all she did, I do not have a single photo of her volunteering at the Trashmagination area with her amazing blue hair and beautiful daughters. Louisa – that is my only regret from this day, but we will make up for this. We will take a photo when I’m teaching your Girl Scouts to hook rugs or some other wonderful thing that I hope I can do for you soon.

The Calm Before the Storm

This is what the Trashmagination area looked like before all the people came:

Trashmagination booth at NoVA Maker Faire – Before the doors opened 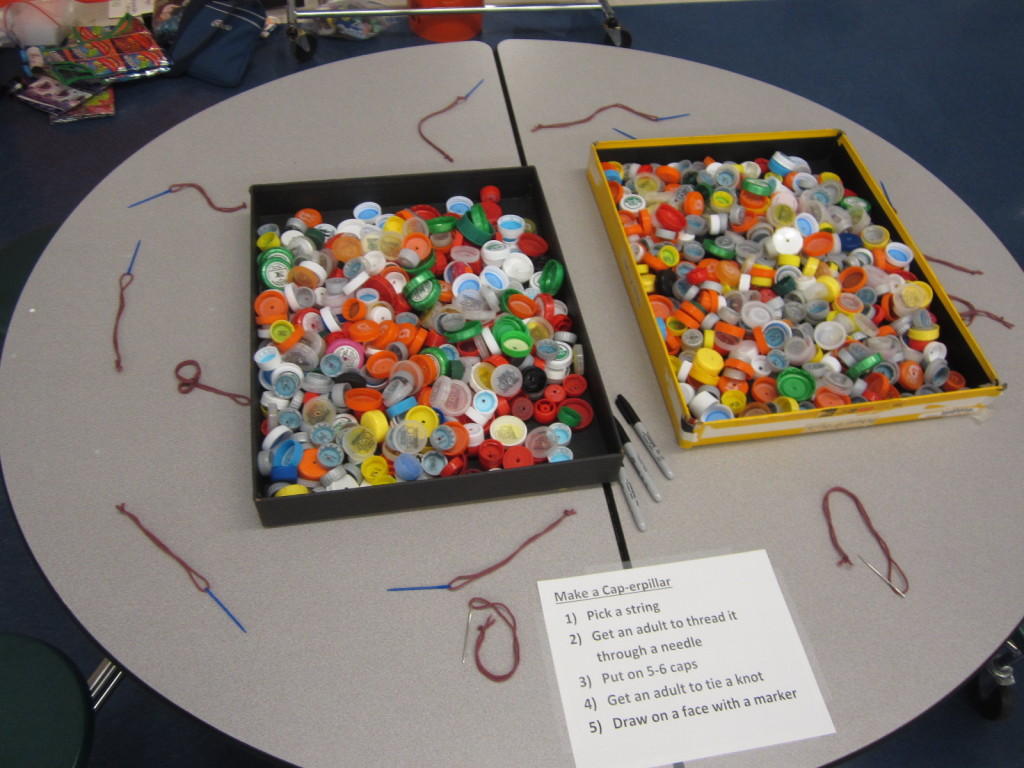 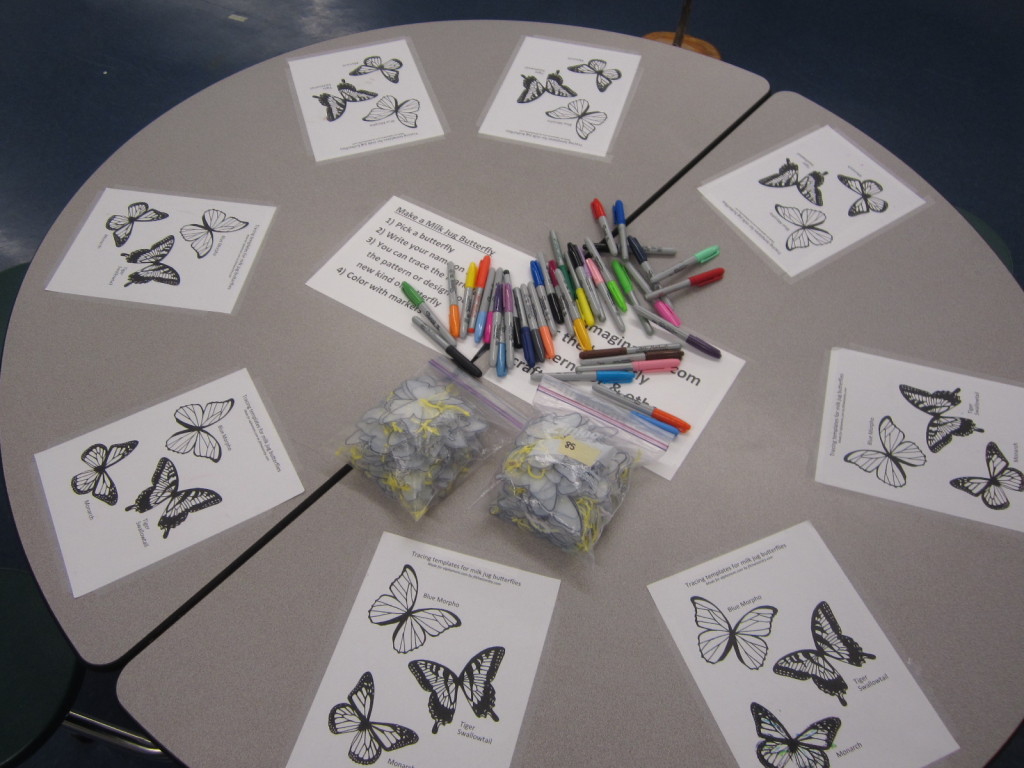 Since I was so busy at the Trashmagination booth, I did not get to meet many other Makers, but I did make a special effort to visit two who focus on creative recycling. First, meet Madi from MadiMonsters who makes stuffed toys with a lot of character. 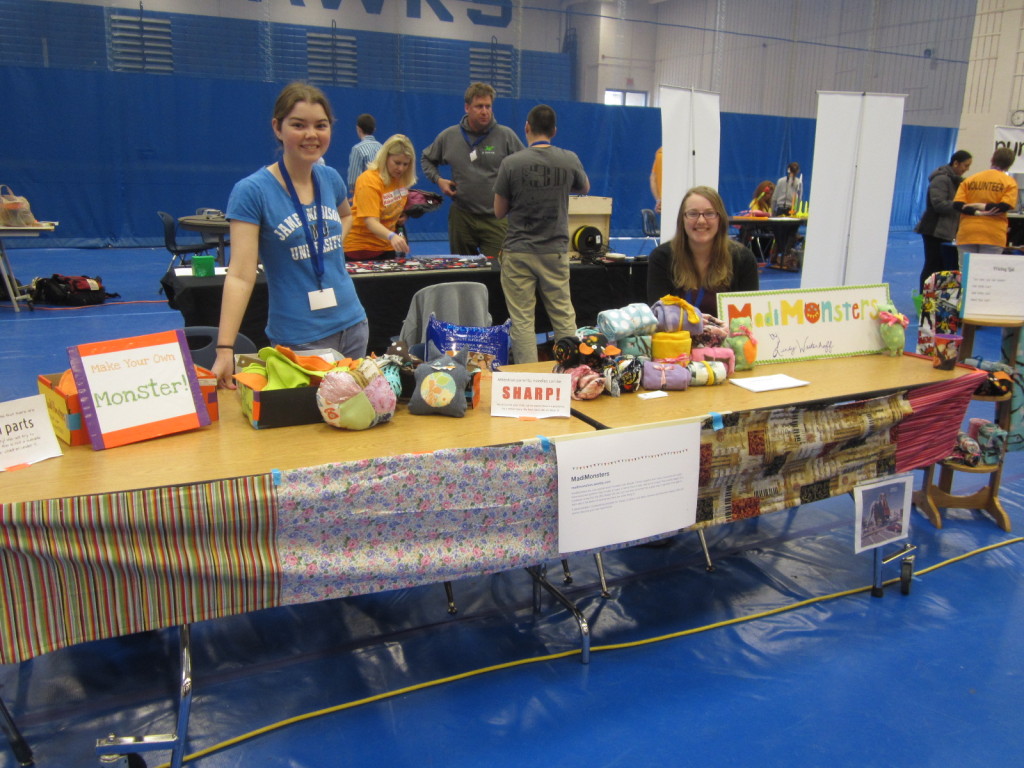 Madi and friend from MadiMonsters

Also, I was delighted to meet Asma Chaudhary who makes artistic items out of recycled things. She wraps them in colorful yarns. Her work is so beautiful and she was so friendly!

So the morning swirled by as hundreds of people made things at our tables. Then around lunch time, Louisa very subtly whispers in my ear, “Carla – Ken Plum is looking at your display.” So I turn around and there is my state delegate. And he does far more than shake my hand and say thank you for coming. He proceeds to ask me about just about every project featured! And then he asks to take my photo, which turns out to be the best photo of me during the whole event (it’s the one featured at the top of this blog). And Louisa amazingly has the brain power to take a photo of him talking with me: 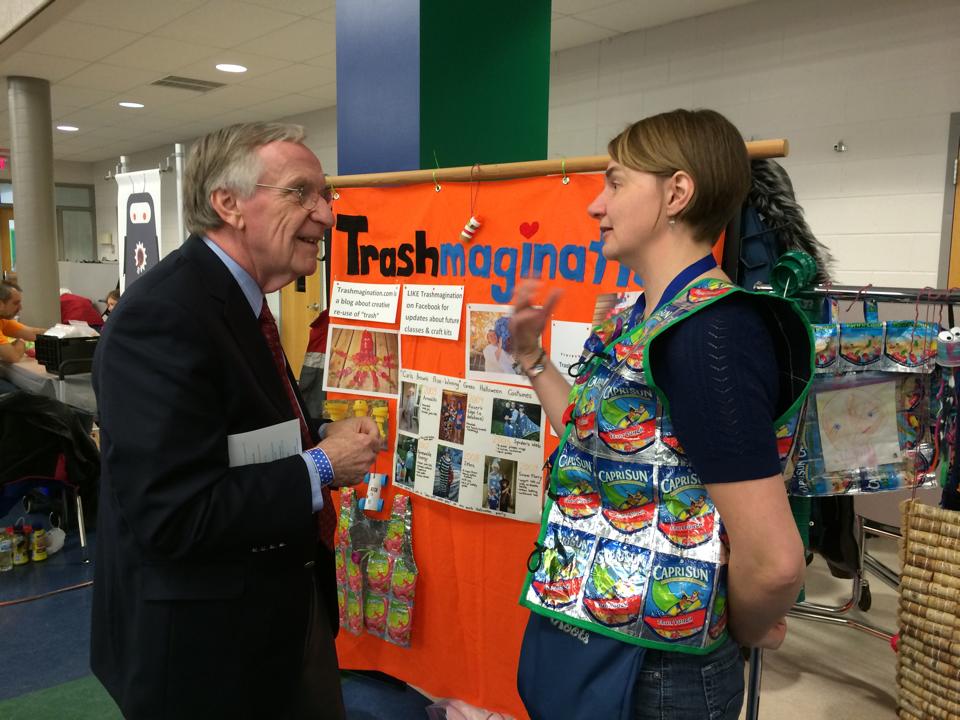 I was so impressed by his level of interest. He told me that he grew up in a rural area where people always were creative with recycling, and he is thrilled to see me inspiring folks today to do this. He asked if I would be on his television show. And then he put a photo of me up on his Facebook page. So that was a very nice and unexpected moment in the day!

I was so moved by the number of strangers who said they read my blog and were inspired to do something. One woman read my blog about taking classes with your kids, and she decided to take rock climbing lessons with her kids as a result. I had so many people ask me where they could take classes from me, or could I lead birthday parties, or can they buy a Capri Sun vest like the one I was wearing (!)

The Most Popular Projects

A few people asked me to design some activities for metal caps as well – especially bottle caps on furniture. 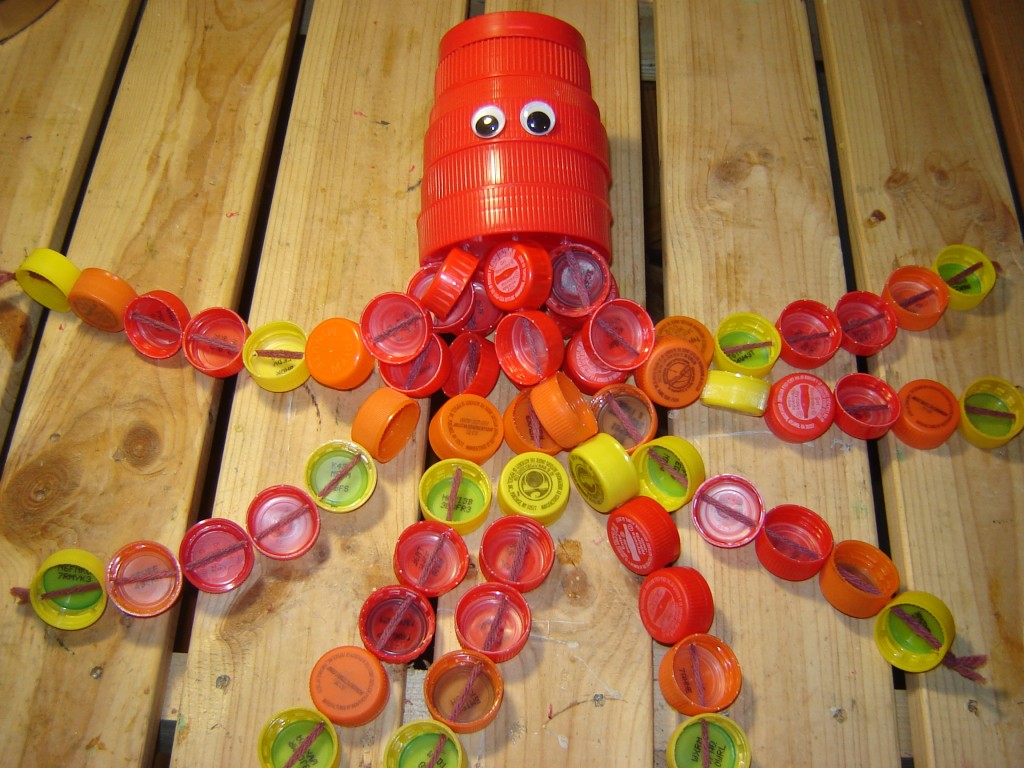 All the Shining Faces

Now let me show you some of the adorable people who made cap-erpillars and butterflies – look at their shining faces! (And usually their parents are behind them, looking just as happy.) 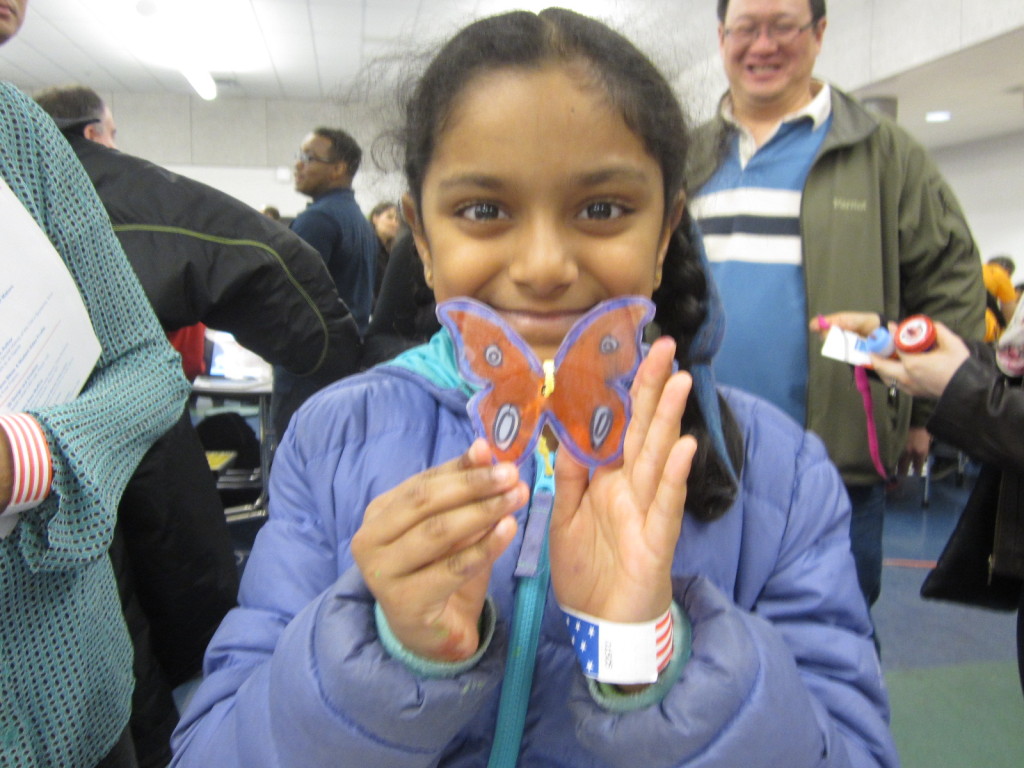 I love her sparkling eyes – she LOVED this activity 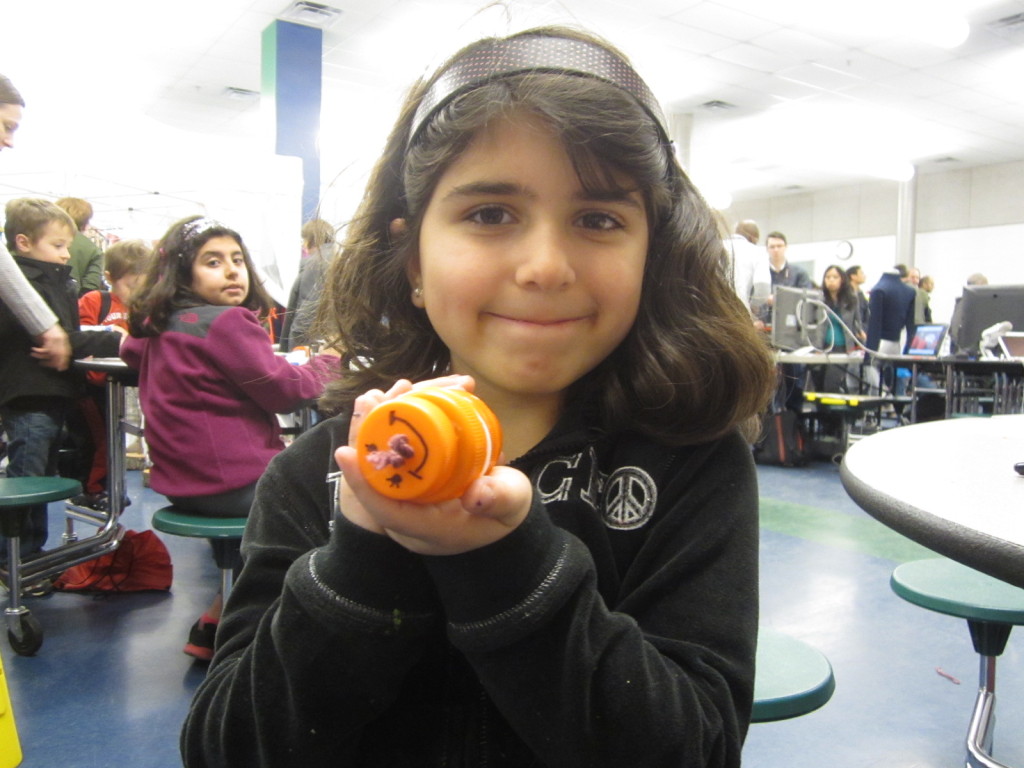 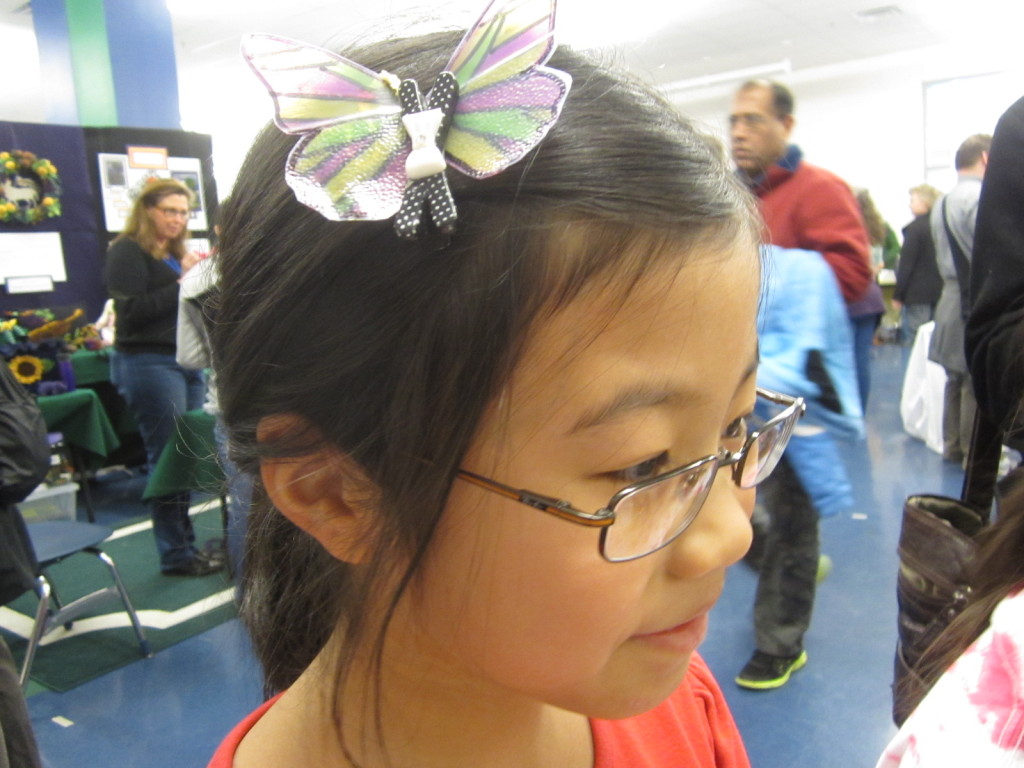 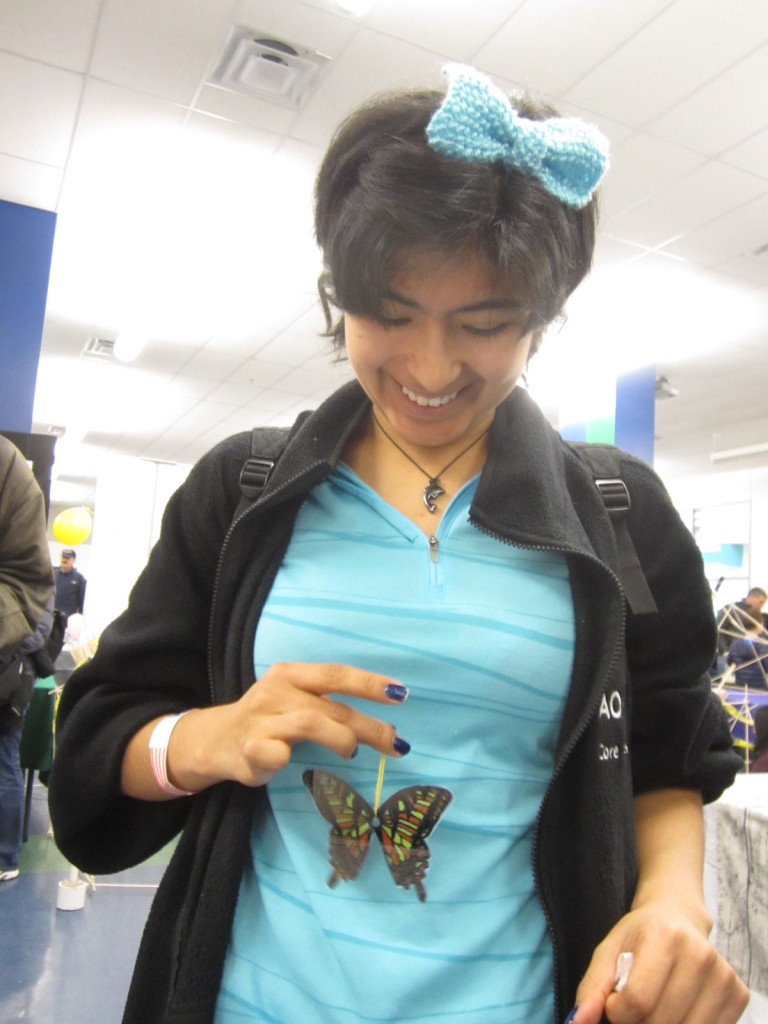 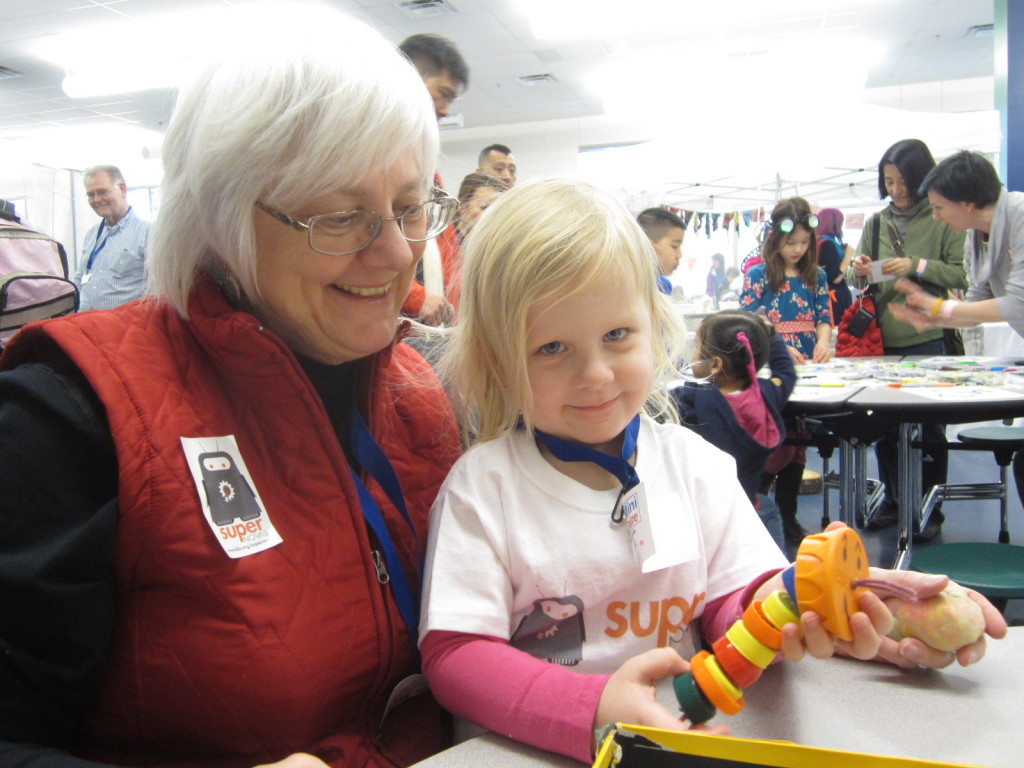 Another happy cap-erpillar customer – oh! you can just barely see Louisa in this photo – she is in the back wearing a gray shirt helping people! 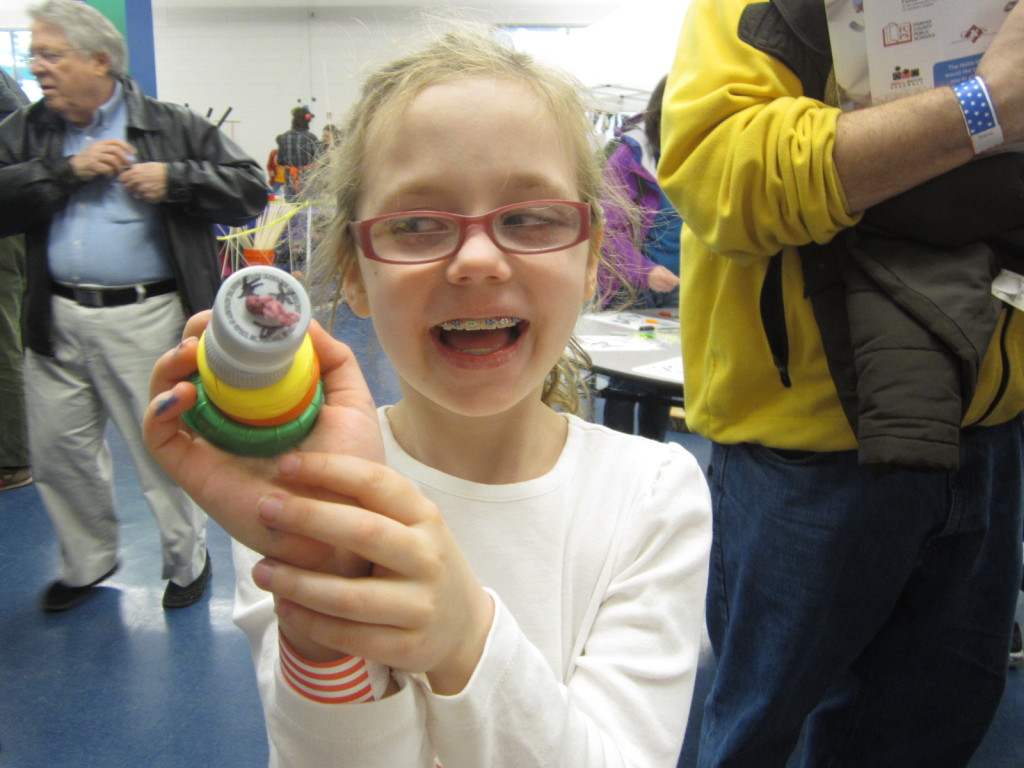 Any rational person would say that drilling hundreds of caps and cleaning your neighbor’s milk jugs is an odd choice in a busy life. But that’s just tough poo poo. Magic is not rational. 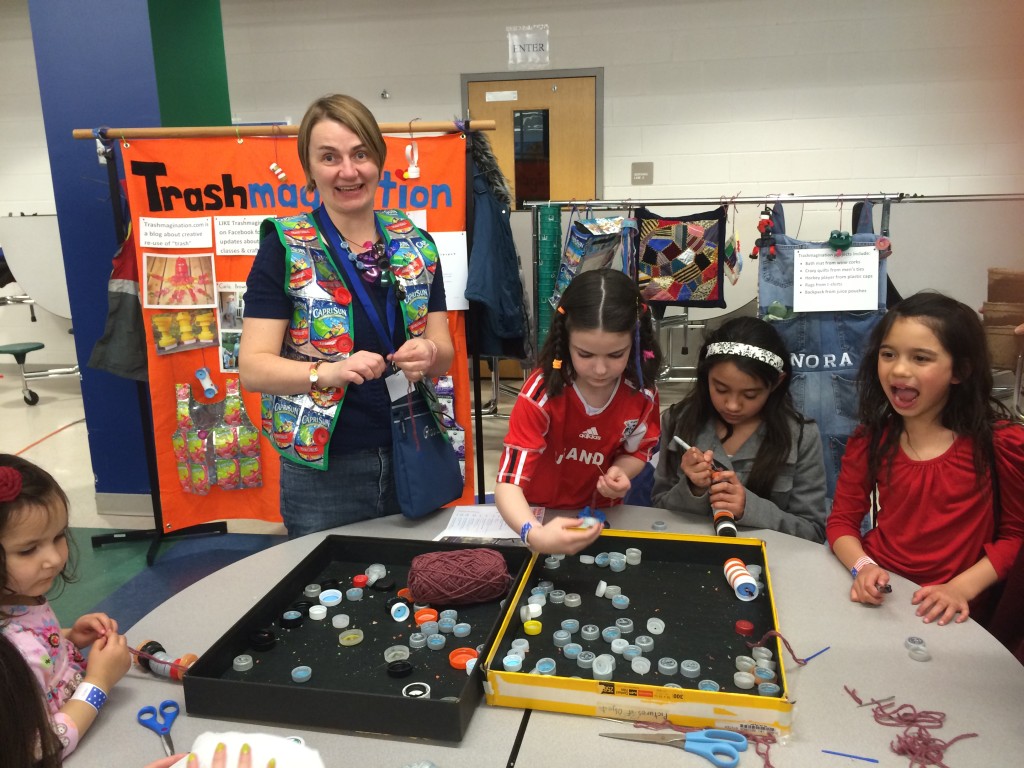 At supper, Bob said, “You nailed it today.” Thanks buddy – for tying strings on 200 butterflies and making sure the kids were safe in that busy place. And for bringing me my favorite food (mango and sticky rice) in the middle of it.