Last fall, I got an idea to take at least one class with each of my children – a class that interested both of us, in a skill that neither of us had tried.

My goal for this experiment was to increase the number of positive experiences that I had with my kids. Read about positive interactions theory later in the blog.

It took research to find such classes. Most offerings are for kids only / adults only. It makes sense because teachers need to shape the lesson to the developmental stage of the student. But I was sure there must be skills that could be taught to both groups at the same time.

Nora chose guitar lessons, volunteering at a cat rescue and a mosaics class (which has not started yet). Russell chose tae kwon do.

So how has it been going? Fabulous!

I had never played guitar and don’t know how to read music. The only musical instrument I have played other than a recorder was a Taiko drum, and I only started those lessons last September.

My mother-in-law very kindly bought me my guitar for my birthday and Christmas present. Thanks Marilyn!

When I looked for guitar lessons, almost no instructors would teach two people at a time, and definitely not a kid and an adult together. I finally found Divine Guitar Lessons here in Reston. The instructor, Coren, said he had taught two adults in the past, and was fine with giving it a try teaching an adult and child at the same time.

We started lessons in December and in two months, I feel like we have learned a lot even though we can’t really play a song yet. The first lesson, I literally had never held a guitar before. That is exactly the feeling I was going for. I wanted to be in a new land with only Nora as my companion. 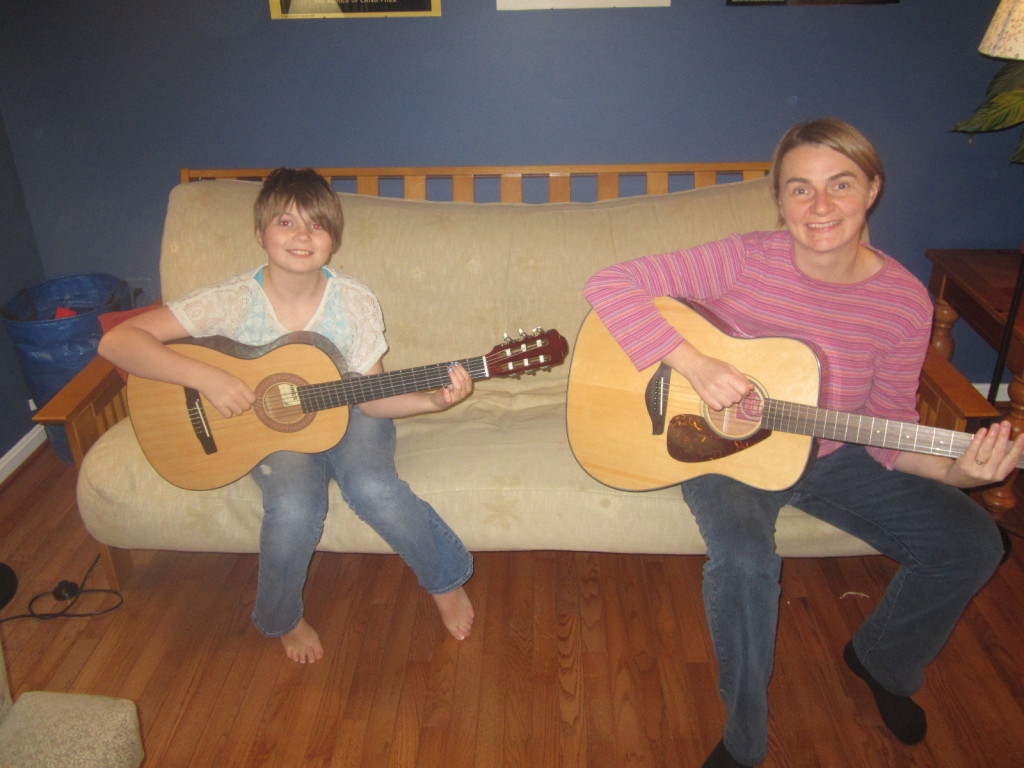 Nora and me practicing guitar

Coren’s approach to start is a series of drills, which gets your fingers used to moving around on the guitar. He says that once you learn the drills, you can then approach any song, rather than starting with a specific song.

We go to Coren’s house for thirty minutes per week, and the lesson flies by. Then we practice at home. We have a chart on the fridge where we track our practicing. We reward ourselves for practicing. So far Nora got to choose and she got a shopping trip (not my favorite, but I get to choose next time.)

Nora is usually enthusiastic about practicing now. It makes all the difference that I know exactly what we need to practice. When I would drive Nora or Russell to a class, but not really hear what the teacher was saying, it made it difficult to practice. I would just say, “Did you practice?” and I was relying on them to remember what they were supposed to do and do it right.

Check out Nora’s blog about our guitar lessons.

Nora’s friend Olivia & her mom Linda have been volunteering at the Petsmart with Lost Dog and Cat Rescue Foundation for a while. One time, they invited Nora to come with them to care for the cats. She loved it so much and we decided to volunteer as well.

It started out that we were volunteering every second Wednesday night. We visit the cat area in the Petsmart where we clean the pens and play with the cats.

Nora did a lot of research about cats – I think she was trying to be the “cat whisperer.” She learned all about their body language. The first cat we cared for was not very fun to play with. Later we found out he had a bad stomach. The second time we went, there were three siblings who were super-playful and we had a blast!

Nora playing with the cats at Petsmart

Then Lost Dog and Cats Rescue Foundation did something cool, which was that it took in 15 cats from a rural shelter that was struggling to get cats adopted. They put out a call for help, because they can only house a few cats at Petsmart at a time. The other cats need foster homes in the meantime. Also, when there is a snow storm, we bring the cats to people’s houses.

We volunteered to be a foster family and that’s when we got Willie for a visit.

Willie the cat getting to know Russell

Willie is a three-year-old male cat. He was quite scared the first day but quickly got comfortable at our house. He’s quite snuggly, but not too interested in playing except with the occasional ribbon. We’ll take him to adoption events and hope he finds a good home soon.

Taking care of cats was a new skill for me and Nora. Bob grew up with cats, so he is the expert at getting Willie in the cat carrier. While I don’t love taking care of the cats as much as guitar or tae kwon do lessons, Willie has been a great diversion during all our snow days!

Russell and Tae Kwon Do Lessons

Russell is a home body, and his default answer to “do you want to try…?” is always no. As a parent, it has been interesting to figure out when to say yes for him. This winter, we decided to say yes to tae kwon do, skating and swimming – and he has loved all three. So lesson learned? Perhaps just say yes a whole lot more for this kid.

Our tae kwon do class is at the Reston Community Center. A group of instructors has been teaching there on Saturday mornings for more than a decade. The three instructors who teach us are both kind and disciplined with the students.

I’m the only adult in the class. Most of the kids are ages 5-8. Somehow that does not bother me. I guess it’s because it is fun! I know exactly what Russell is learning because I have to learn it too. It’s one thing to observe it from across the room, and another to give your instructor a big punch in the chest! 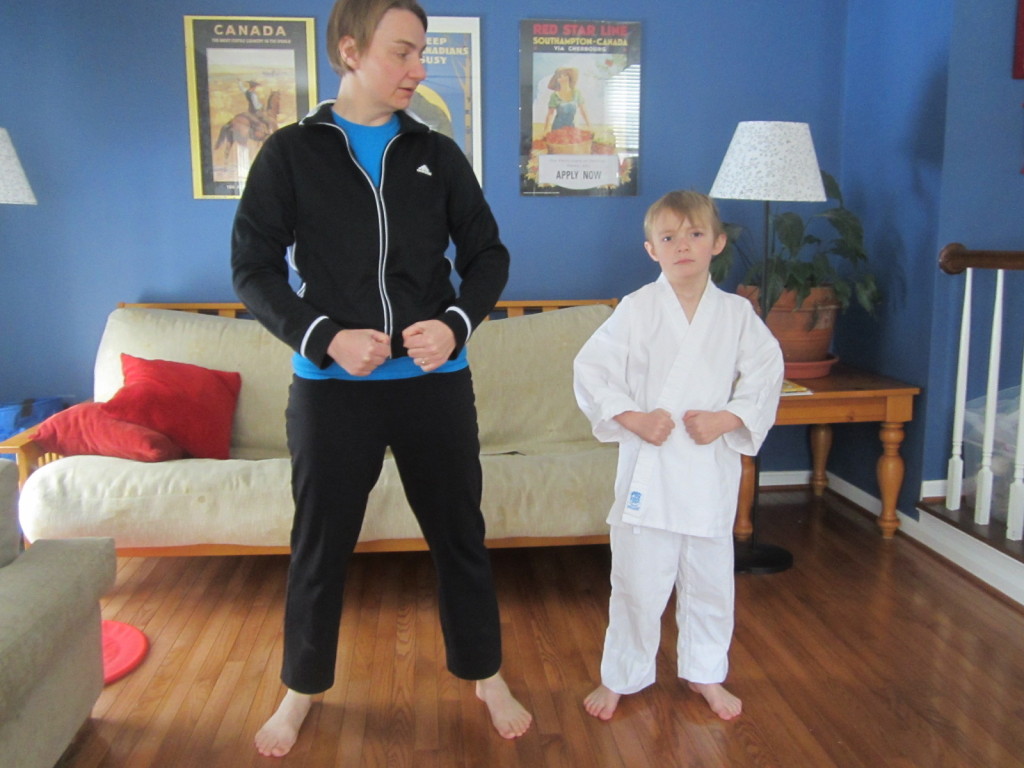 The instructor who works with the beginners or “no belts” like me and Russell is named Master Butts. He is such a great teacher with beginners. The first day, there was a little boy who was so scared, and I saw Master Butts gently bring him to the group. I think the kid thought we were going to kick him. He patiently reminds kids not to wiggle, to get hands out of their pockets, to look him in the eye, and even to kick or punch him. I have seen a lot of improvement in the students since the first day.

I also appreciate how the instructor treats me in the class, as just another student. He doesn’t avoid me or make me a special case. He is good about separating Russell from me so Russell doesn’t keep talking to me. A few times, I have wanted to whisper a correction to Russell, or reach out and bend his knee for example, and it helps when we are far apart.

Russell says he wants to sign up for the next tae kwon do session, so that’s a great sign!

Last week, as we were walking from tae kwon do, Russell said, “Mom – you know how you signed me up for these classes and I didn’t want to do it? Well, you were right. I like them. I’m glad you did that.” Wow – what an amazing thing for him to say! Seriously, this is the kind of thing a parent imagines, but it never really happens, right?

A few days ago, Russell said to me, “Mom, we are buddies. We do everything together.” Awww.

Additional Benefits of this Parenting Experiment

Besides the classes we have been taking together, Nora & Russell were also inspired to take a number of new classes on their own.

Russell started skating lessons and went from zero to hero in a few weeks. The tipping point was going to a public skate with a friend and playing chase. He is enjoying the lessons so much, he asked to go to two weeks of skating camp this summer. Is hockey on the horizon? We’ll see if he follows in his sister’s and dad’s hockey obsession. 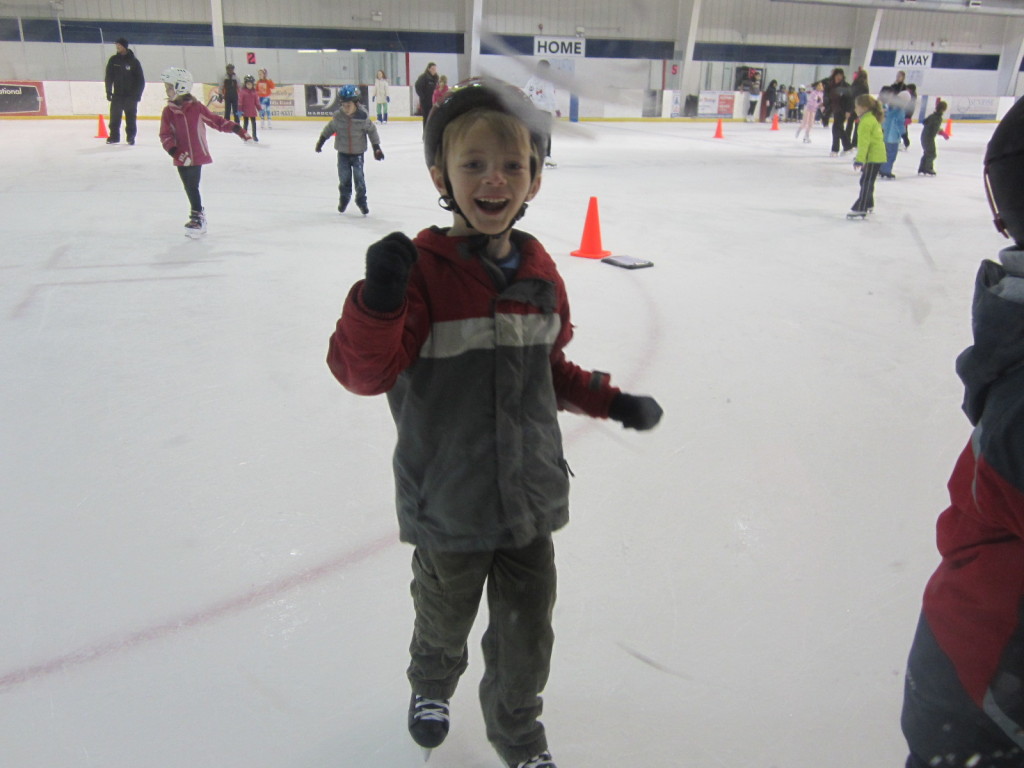 Nora took a 6 week sewing class, and she had a great time at Crafty Stitches. She first learned how to sew a straight line by following dots on a piece of paper, then made a bag, a skirt, a quilt for her friend Dominic and is just finishing some pajamas.

I believe that this experiment has fostered a culture of exploration within our family. It is one of my life goals for my children to try a lot of things and see what makes their hearts sing. And same for me!

Have you heard about the research by Dr. John Gottman which says that strong relationships have a 5 to 1 ratio of positive interactions to challenging ones? That means, if you want to build a strong relationship, and you have a challenging experience with someone, you would need to find five positive experiences to have an overall positive. That’s because we remember negative interactions more strongly that positive ones.

When you have kids, there are a lot of opportunities to have challenging experiences. Of course, you can work on those as well, by getting up earlier to pack lunches, or biting your tongue and taking a deep breath. But they happen. So I figured I needed to work on that ratio two ways – yes, by reducing negative interactions, but also by increasing positive ones. Planning these classes built positive interactions into our daily life – and I didn’t have to remember to do it, or have will power or whatever. They just happened. I think this is the greatest lesson I learned from this experiment. If you want to build strong relationships, think of ways to build positive interactions into your routine in a way that you don’t have to remember to do it.

Now if you have a child or perhaps two children who have attention issues, I believe this becomes even more critical. My kids get distracted by everything, so I spend a fair bit of time reminding them what they were doing. I try to do that with care, but it wears me down.

Not only do I get energy from taking these classes with them, I get the support of all those other adults who are teaching us. Master Butts, Coren, Margery – they all treat my kids like they are awesome. So I get awesome points just by being nearby! 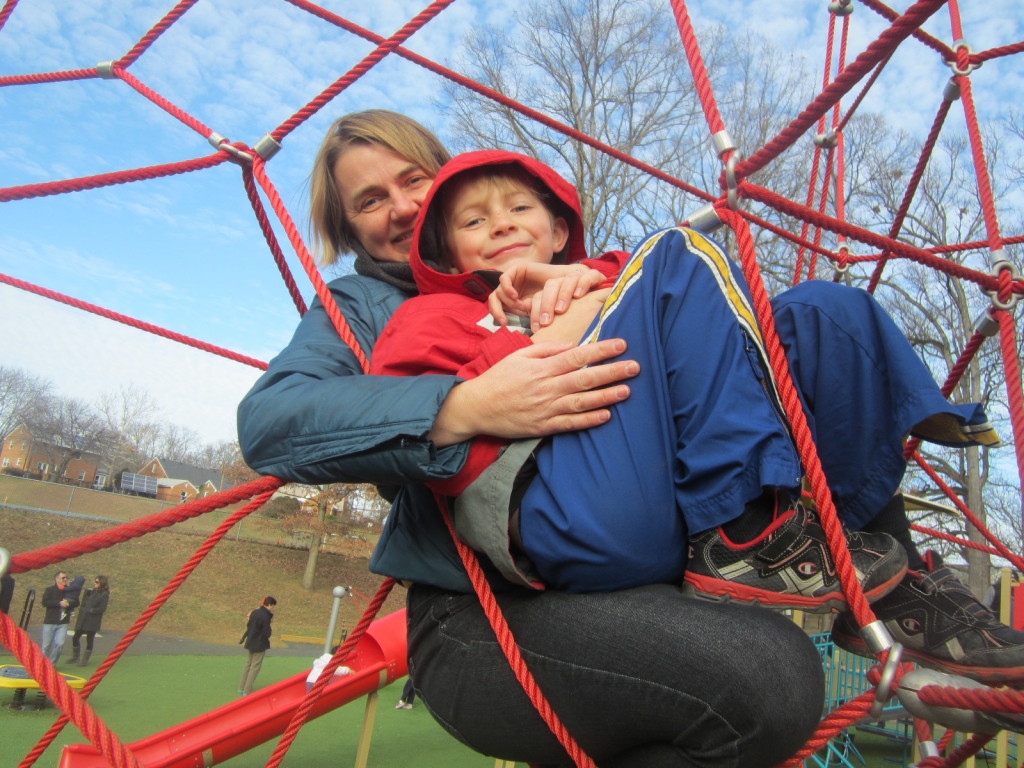 Hanging out at Tuckahoe Park playground in Arlington