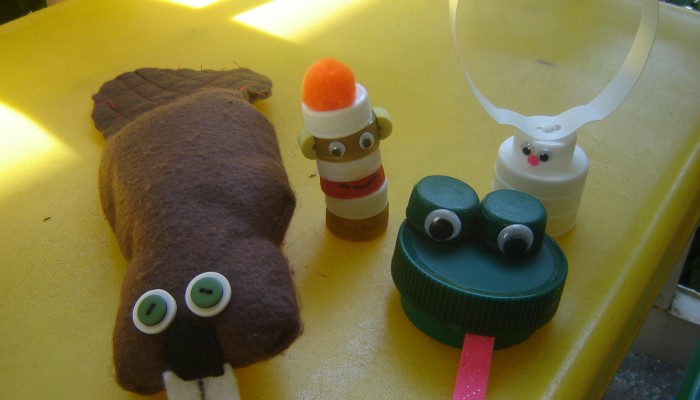 In general, I am not a fan of glue in my crafts because:

Using String or Cord Instead

So how could we make plastic cap animals while avoiding glue as much as possible? We thought back to our caperpillar days, and realized that string or cord is the best way to hold caps together. It’s flexible enough for kids to play with the item, and yet strong enough to give it form.

There were two ways to put the cord into the cap animals. If we did a straight line, like a spinal cord, we would need to tie a very large knot at either end to keep the caps in place. This relied on a knot that was tight and big enough not to slip through the holes. It was strong if we made the cord into a loop, so we could tie the two ends together tightly. This looped-cord method became the basis of our plastic cap animals.

To do a looped cord, it means the cap that forms the head must have two holes instead of one.

What were our first plastic cap toy designs? 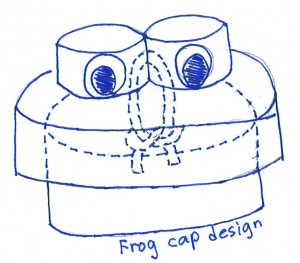 For the frog, the loop also attaches two green caps for the eyes

For the frog eyes, we used a variation on our spine technique. Hopefully my drawing explains a bit. Basically, the loop that came out of the top also went through two green caps to make the eyes.

The sock monkey’s ears are made from a foam bead that we cut in half.

We used some glue for the eyes and pompoms. While I’d like to avoid glue entirely, I felt it was okay as long as the main body of the creatures was strong and would resist the pressures of kid’s playing with them.