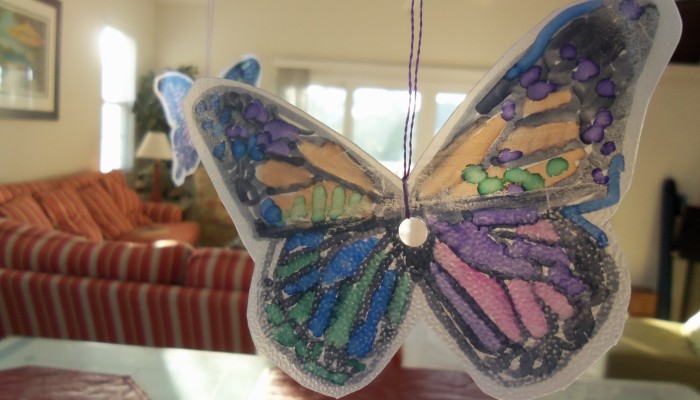 On March 16, Trashmagination has applied to host a table at the Northern Virginia Maker Faire. One of the activities that we hope to offer is milk jug butterflies. These are suncatchers that you make by cutting translucent plastic milk jugs into the shapes of three butterfly species – monarchs, tiger swallowtails and blue morpho.

I first saw this craft featured on one of my favorite blogs, Filth Wizardry, where she made a mobile using butterflies made from plastic milk jugs. She went into more detail about the butterflies on a guest blog on Alphamom, including the PDF for the butterfly shapes.

We made our first milk jug butterflies while on spring break vacation two years ago. We were visiting my parents at the beach, and we did not have access to my regular stash of craft supplies. But we did have milk jugs, markers, scissors and thread, so we made this craft and decorated my parents’ condo.

I have since used this craft with a number of groups at National Wildlife Federation and with the Family Nature Summits.

I have tested this craft with a few types of plastic including plastic from 2 liter soda bottles and from water jugs. But the translucent milk jugs are the best because:

* Some milk jugs have a bumpy texture, which looks cool after you color them – They let the sun through, but in a more interesting way than a plain plastic.

* Some kinds of markers “blur” a bit on this type of plastic, creating a watercolor effect.

* Milk jugs have flatter sides than 2 liter bottles, which looks better – although I will sometimes purposefully cut the wings on a curvy part of the jug to make it look like they are flying.

While we try to buy milk in reusable glass bottles from a local farmer, sometimes I am not that organized and we get plastic milk jugs at the grocery store. Our county recycles this type of plastic, but reuse is always better than recycle in terms of energy use.

So now here’s the part where I ask for your help. If you would like to contribute clean milk jugs (quart or gallon size), please do! I have cut out 85 butterflies so far, but I’m aiming to make about 500 in preparation for the Maker Faire. I don’t know how many people are coming, but I figure I’ll be tired after helping people make 500 butterflies.

If your milk jugs are solid white plastic instead of the translucent kind, that’s great! The other craft I’m preparing is my caperpillars, except I’m going to make the eyeballs as a disc that you insert between two caps rather than googly eyes, and those are made with solid white plastic from yogurt lids or milk jugs. 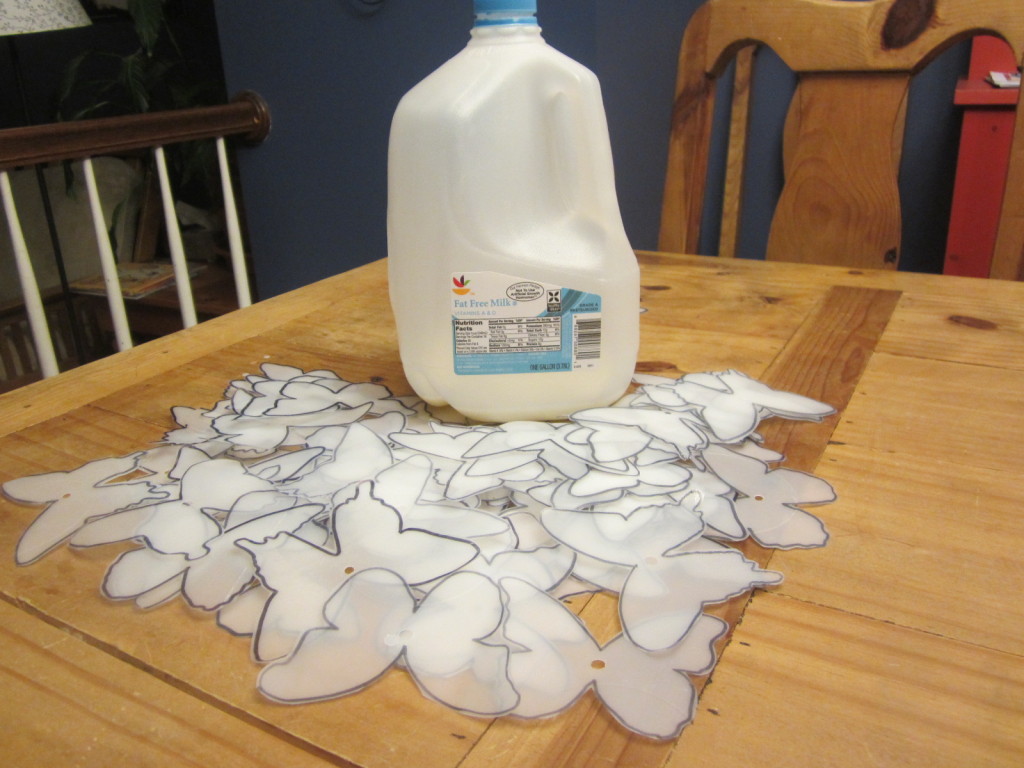 85 milk jug butterflies on the wall…

I can get between 3-5 butterflies from a milk jug, so if I want to cut about 400 more, I need about 100 milk jugs. I’m not actually that worried about finding 100 milk jugs, because on Mondays, I walk around our neighborhood and take them from my neighbors’ recycling bins. I typically get about 10 jugs per recycling day. It’s a bit risky though because people do not always rinse their milk jugs sufficiently. I would much rather use jugs from friends who rinsed thoroughly :). If you want to be really sure to avoid stinky milk smell, you can cut off the top with kitchen scissors and give it a little soapy scrub. I don’t use the top part or bottom of the jug for the butterflies so you don’t have to worry about damaging that area.

Are You Available on March 16?

I would really appreciate friends to help at the Trashmagination table on March 16. Bob will be on kid duty, likely exploring the Faire, so right now I’ll be on my own. Even if you could come for 30 minutes, you might come right when I need a pee break. So please consider it! You don’t have to be artistic at all, just friendly. It is from 11am-4pm on Sunday March 16. I’ll bring us snacks!