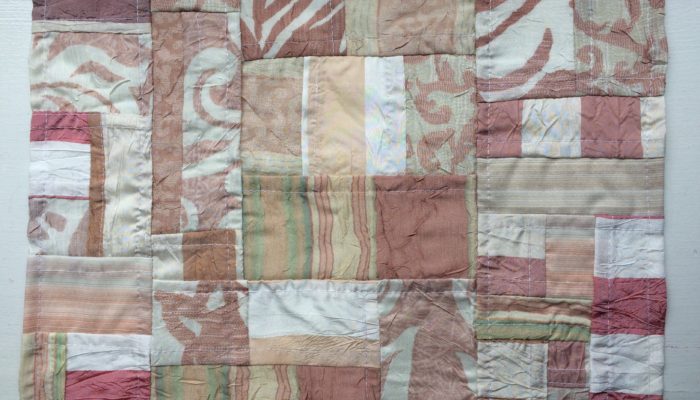 Bojagi means wrapping cloth. Many bojagi are made from a solid piece of fabric, but some are made by piecing together fabric remnants into a patchwork. One of the most striking aspects of bojagi (also written as pojagi) is that the seams are done in a way so it looks “done” from both sides of the fabric. It is different from other quilting styles made from three layers of fabric. It means bojagi looks delicate but it is actually very strong, and was used to wrap and carry many types of objects.

In January and February 2019, the Korean Cultural Center in Washington DC hosted an exhibit called Tradition Transformed, featuring the bojagi art of Kumjoo Ahn, Julia Kwon and Wonju Seo. I was thrilled to listen to their presentations at the exhibit opening. Here are photos I took at the exhibit.

Here are some links and videos about these artists:

I watched a tutorial by Vivika Hansen DeNegre to learn how to sew bojagi with my sewing machine. My first piece was made with upholstery samples that were used by interior designers to plan curtains.

I also found inspiration in the work of Kiva Motnyk from the Thompson Street Studio.