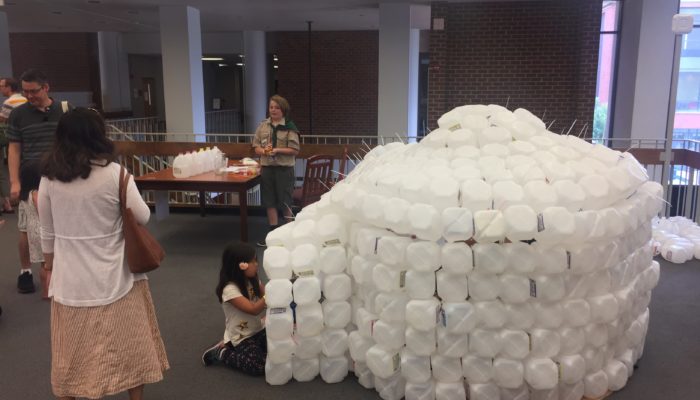 My husband Bob and I designed a new way to build an igloo from plastic jugs for the Maker Faire NoVa. Most igloos from plastic jugs are put together with a hot glue gun, but Bob and I wanted to find a new method. In this episode, we’ll talk about what we learned and it even includes an interview with Bob – our first podcast guest ever!

We call our project the “Jugloo” combining the word “jug” and “igloo.”

Thank you to the Starbucks at North Point shopping plaza for supplying almost all the plastic jugs that we used in this project!

Why Our Igloo is Different

Every igloo made from plastic jugs that we researched was put together with a hot glue gun. We did not want to do that method because we wanted to build the prototype, make sure it worked, and then transport all the jugs to the Maker Faire to be built on site. We did not want to do all the gluing twice. So we experimented with using zip ties to put the igloo together and we got the build process down to about 2 hours (or less as we get more experienced.)

Our first attempt was not successful. We duct taped the first row to the floor but the tape could not bear the weight of the jugs.

Then we came up with the idea support the structure with three garment racks. We already owned these racks because we use them to display Trashmagination’s banner. Here’s the link to the exact model if you want to replicate this project – https://www.target.com/p/metal-base-adjustable-single-rod-garment-rack-black-room-essentials-153/-/A-51688630.

We needed to drive all the jugs to George Mason University which was about 30 minutes from our home. We hoped to do it in one trip, and we were successful!

Building the Jugloo at the Maker Faire

Thank you to the Scouts and Scout leaders who helped!

Here are instructions prepared by Bob on how to build the Jugloo.

After the Maker Faire

My son did a presentation about the Jugloo at his school.

Later this week, we are building the Jugloo at my son’s pre-school so they can have an Arctic party. After that, it would be great to find a nature center or other place which would like to host the Jugloo!

In terms of size, the cardboard base of the Jugloo is 9 feet across, so it’s just a little bit smaller than that inside. It was about four feet tall along the edges and five feet tall at the peak.

My daughter made a cute sign out of jugs. She wrote the letters for Jugloo and Troop 1577 on jugs with marker. So that used another 15 jugs. The total jug count was 412 jugs.

Other Igloos Made from Plastic Jugs

Every other igloo that we studied was put together with hot glue guns. These are great examples of that type of design.