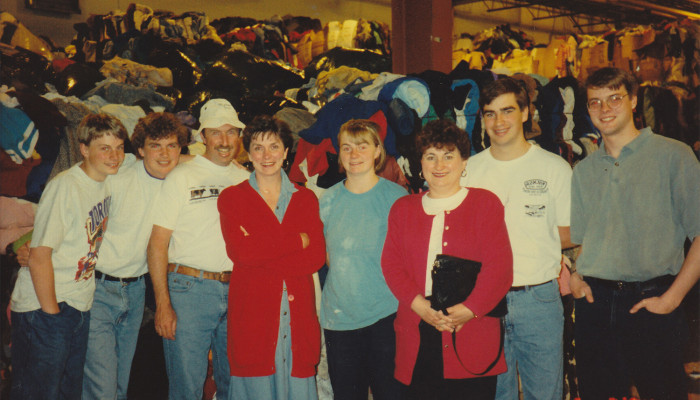 During my summer job in 1994, I worked for a company named Recycling Together in Ottawa, Ontario. It was co-owned by non-profits that sold recycled clothing – a central sorting facility. Above is a photo from when my family visited me at work – (left to right) my brother Kraig, my cousin Brian, my uncle Gilles, my mom, me at age 21, my aunt Marlene, my cousin Dennis and my boyfriend-now-husband Bob.

That summer job was my first experience with industrial recycling, and since I doubt many folks have done this job, here’s how it worked.

How We Sorted the Donated Clothing

Each sorter stood in front of about 40 large moving boxes, each representing a different type of item. For example, there was a box for children’s clothing, men’s clothing, towels, bedding etc. Women’s clothing was so plentiful that it was sorted into multiple sub-categories.

It was helpful that I was good at basketball because I would pick up a piece of clothing from a bag or box, look it over, and then throw it with all my strength to the right box.

Men’s and women’s clothing could not be more different in the world of textile recycling. Most men’s clothing items were almost in tatters. The seams were rubbed raw, there were holes and stains. Women’s clothing looked almost new, and quite a few items came with price tags still attached.

The box that got the most money was the denim box. I was told people from overseas would buy as many pairs of jeans as we could gather.

The clothing that was not in good enough shape for sale in the retail secondhand stores or overseas was thrown on a conveyor belt that went into a giant baler. This machine typically compresses hay into giant rectangular bales, wrapping them with thick wire. When enough fabric filled the baler, it made giant bales of rags. These were sold to mechanics to be used in their shops.

Most of the sorters were women who could not speak English well, except for a few young men who drove forklifts and the manager. Many of the women had been professionals in their home countries before coming to Canada. I spent my lunch hours practicing English with them and understanding their reality now.

While I did help with sorting, most of my job that summer was education and communications. In other words, I was working on campaigns to encourage clothing recycling. One way we did that was to design a Recycling Together mascot and attend local community events. Here I am in the costume that we made from a large barrel, dryer tubing, and an assortment of textiles from our facility. Our mascot was called “Bennie the Bin” (something I had forgotten, but Bob remembered.) The eyes are made from lacy curtains. 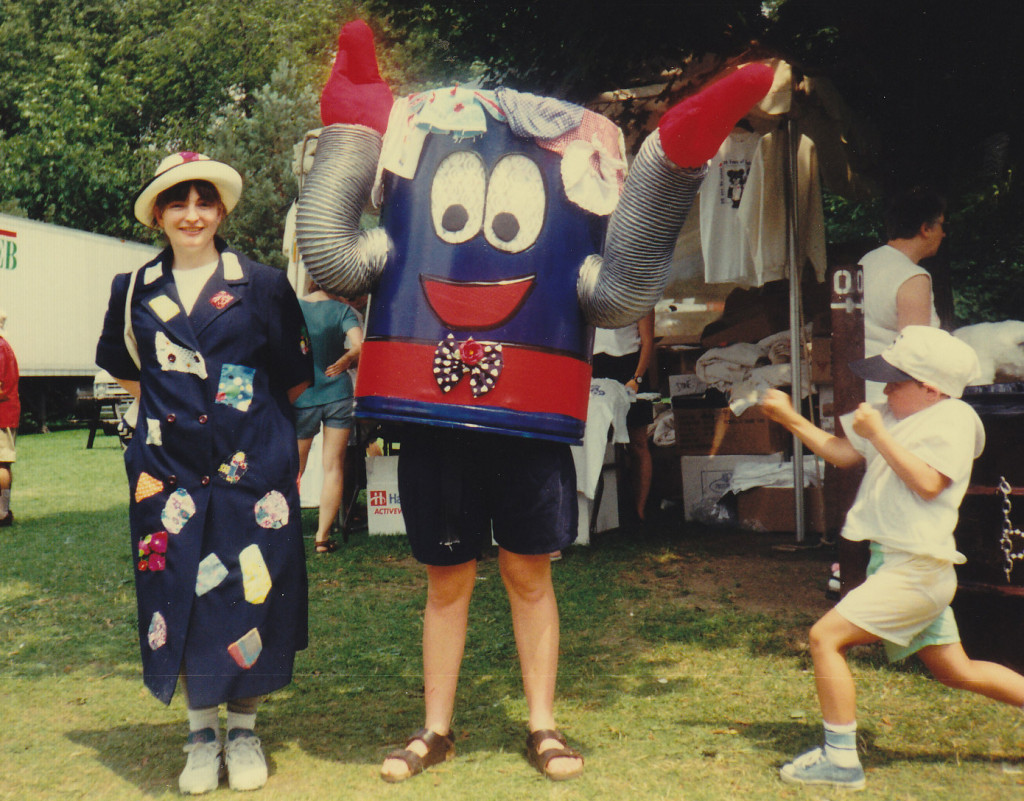 The woman standing beside me is Gail, who was another summer employee. She is wearing a coat that I decorated with lots of patches.

[I LOVE how there is a boy in this photo who is about to attack me in the mascot costume. Anyone who has worn a large mascot costume knows this is what happens and one reason why you really need a dedicated “handler” to help you out.]

Another task we did was organizing a conference on recycling textiles which was attended mostly by local environmental activists and college students. I learned a lot about just how much volume of clothing people give to secondhand.

So find creative re-uses for your clothing like this denim toy organizer or my hooked rugs made from recycled t-shirts or my mom’s baskets from crocheted bedding. The effort of transforming our clothing into other useful things can help us realize we don’t need to buy so much in the first place.