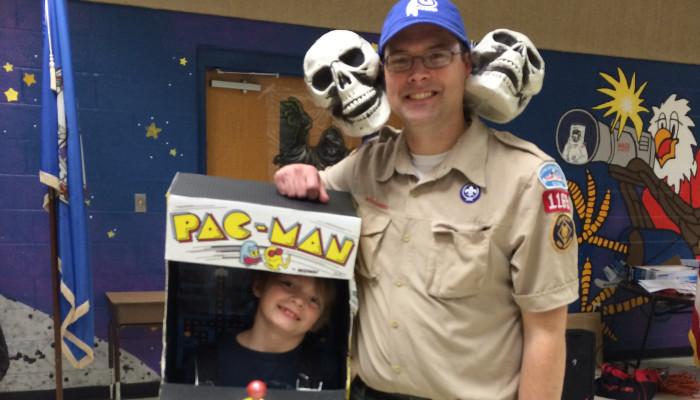 This year, the Cub Scout motto changed to match the Boy Scout motto. It is now:

That’s a lot of adjectives for a kid to remember!

My husband Bob is a Cub Scout leader and he volunteered to lead the Halloween pack meeting. He was asked to tell a scary story. He decided to write a story that would help the Cub Scouts learn their new motto. He used a technique called a “Memory Palace,” which is a mnemonic device that you can use to remember random items. Here’s how it works – you imagine a palace or a house and you put items in each room that start with the same letter or have another similar quality as the list of items you need to remember.

Below is the story Bob acted out at the meeting. For each monster, he looked for a Cub Scout who was wearing a Halloween costume that was somewhat on theme, which worked in most cases! And he had the Cub Scout hold up the first letter of the word they represented. At the end, it was amazing how well the Cub Scouts knew the answers.

Another technique that Bob used to engage the scouts was by printing out a lot of Halloween-themed jokes and having volunteers read them out. They were pretty awful jokes, but the boys loved reading them.

A scout approaches the door of a haunted house and steps inside.

Our scout saw a lot of creatures in the haunted house.  Can you remember what they were and what were like?