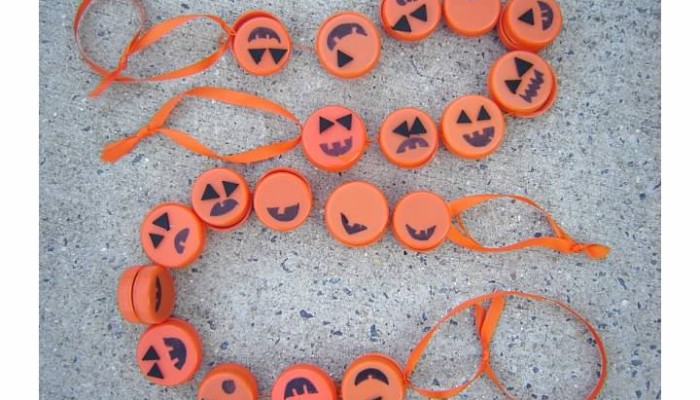 I love making Halloween costumes from recycled materials. It started in 2002 at work. There was an annual Halloween costume contest. Originally the prize was a day off with pay, and that was a very enticing prize. There were two categories for prizes – traditional and work-related. After a few years, when I kept winning one category or the other, they added a new category – costumes made from recycled materials. I won that one most years, although there were some excellent competitors!

Making these costumes was my first deep dive into Trashmagination. They gave me a deadline and a motivation to make things from trash despite a busy life.

One goal I have for my Halloween costumes is that ideally, I can take them apart afterwards and recycle the components. For that reason, I tend to avoid glue and instead use safety pins and twist ties to hold them together.

The first costume from recycled materials that I made was an octopus. I went around my workplace gathering up the cups from our Keurig coffe makers, bringing them home. I would use a knife to remove the foil and put the grounds in my compost. But it was too much to keep up. So I took some of the cups and made an octopus costume. I safety-pinned the clean cups on to the stuffed arms of four gray sweatshirts. I did not win the prize, which was a day off from work. (It was won by an employee in pajamas because teleworking was new concept then.) I was determined to win the next year. 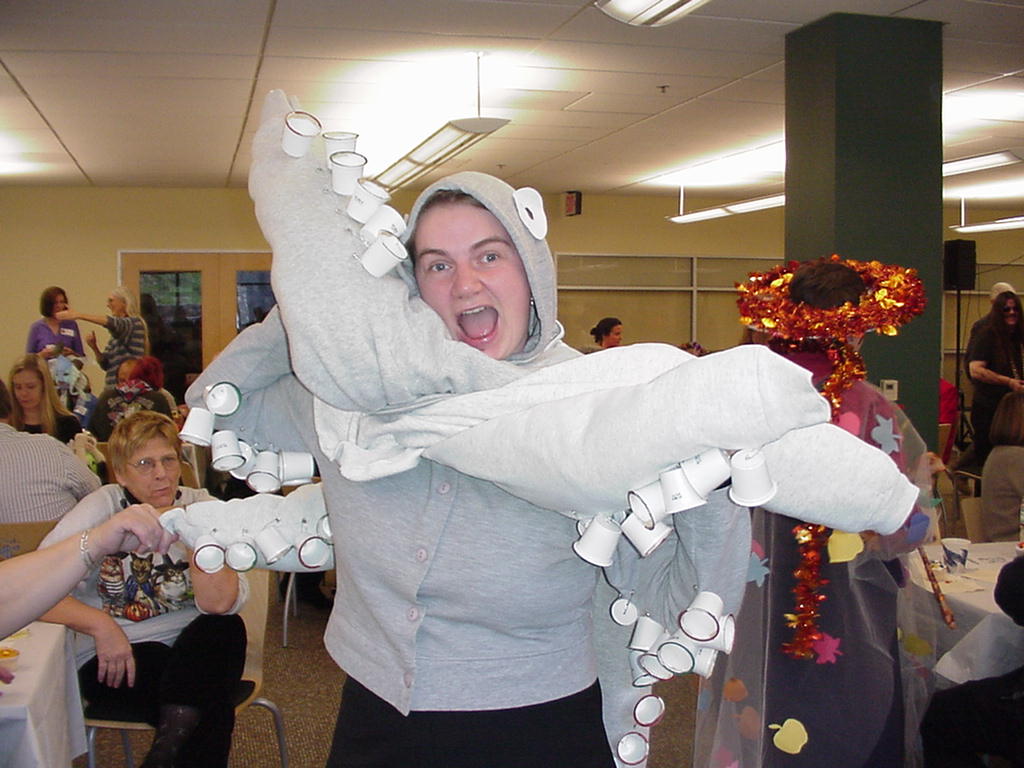 This costume was made from metal lids from frozen orange juice. I punched holes in the north-south-east-west locations and attached them to each other with twist ties. Then I made the head from a milk jug, using papier maché to give it shape. I did win the prize this time. What made it more challenging was that I had a one-month-old baby with me, so I was Nora’s pet armadillo – so I may have won due to Nora. 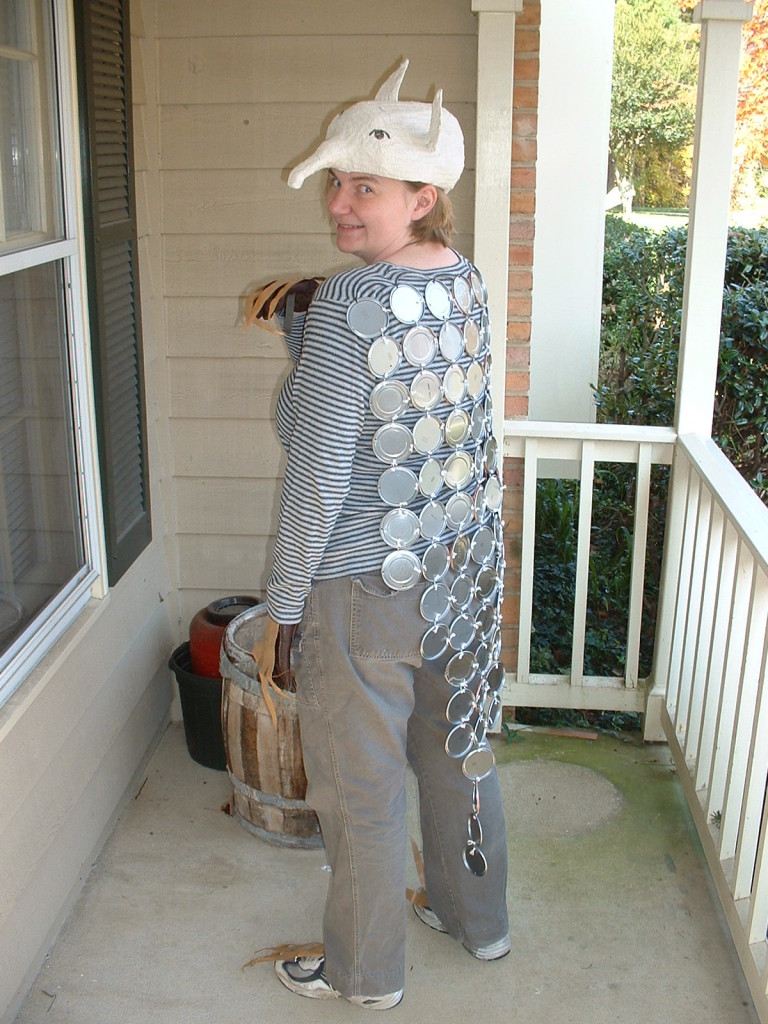 The next year, I was the Raiser’s Edge database that National Wildlife Federation used to keep track of constituent information. I stuck a bunch of used name tags all over myself with pretend data inside each one. 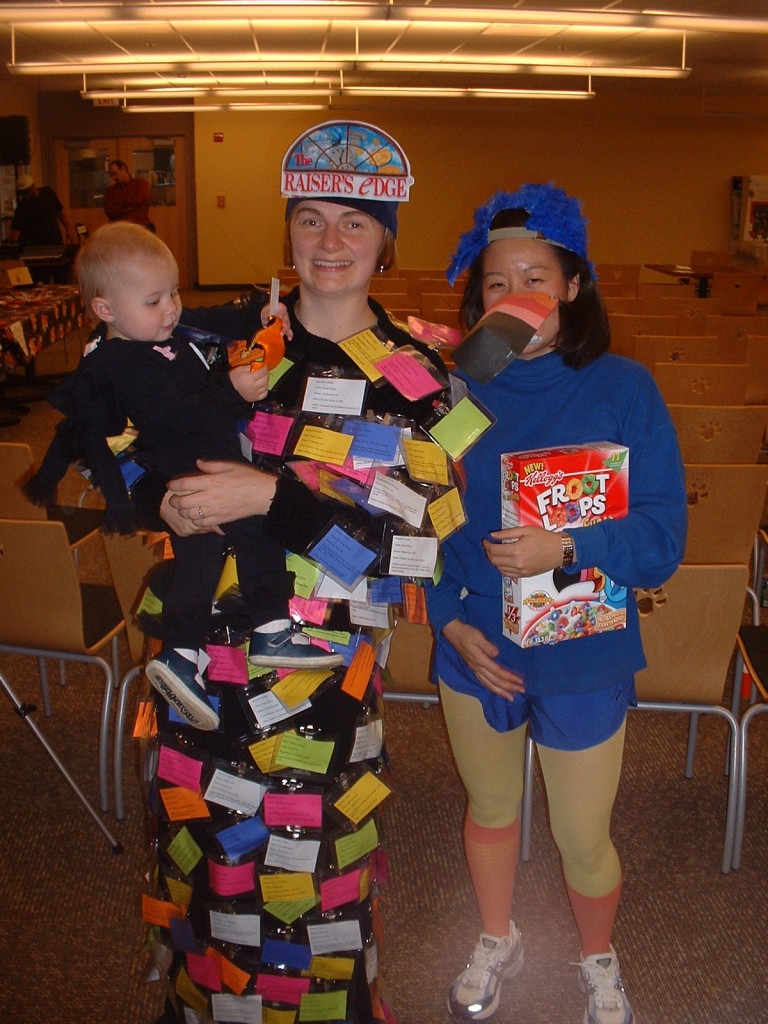 This year, my daughter Nora was a spider for her costume, so we looked pretty cute together. I made her costume by making four long skinny tubes from fabric scraps and sewing them on the back of a black t-shirt.

Do you notice that Kim and I always get our photo taken together at Halloween? That’s because we both loved making our costumes.

I did not make a costume in 2006 because that was the year my son was born who did not sleep through the night until he was 10 months old, so I was pretty much exhausted.

You might notice that I recycle parts of previous costumes. In this one, the solar panel is made from the same metal lids as the armadillo back in 2003. The wind turbine is cardboard in a plastic food container and an oatmeal container, attached to my bike helmet. The geothermal pipes are from that same tent as the spider web. 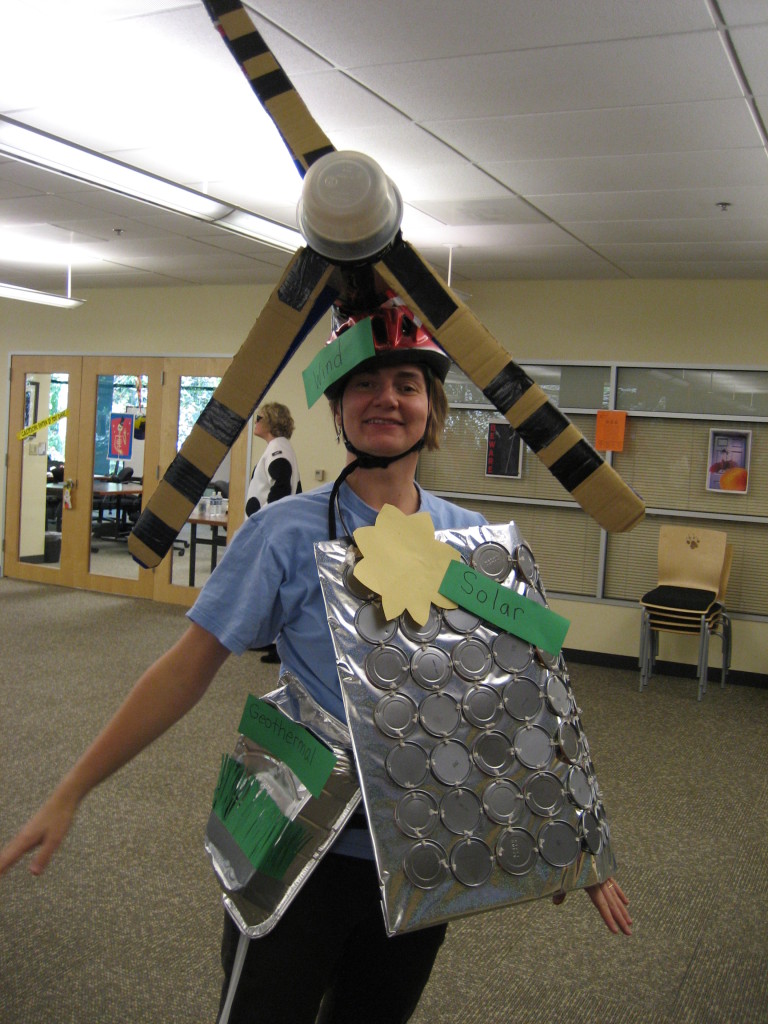 The Keurig cups are back! To make this costume I pinned hundreds of cups in black and white stripes. My friend said it was the “least flattering” of my costumes. 🙂 The zebra head is recycled from the 2003 armadillo costume, with a mane from pipe cleaners (gah! Not recycled!) and stripes painted on. There were no cups on the butt so I could sit down :).

Each snowflake was cut with an exacto knife from a yogurt container lid. I had hoped to cut a lot more, but they took more time than I anticipated. The hat was a swirl of cardboard painted light blue with cotton batting for trim. 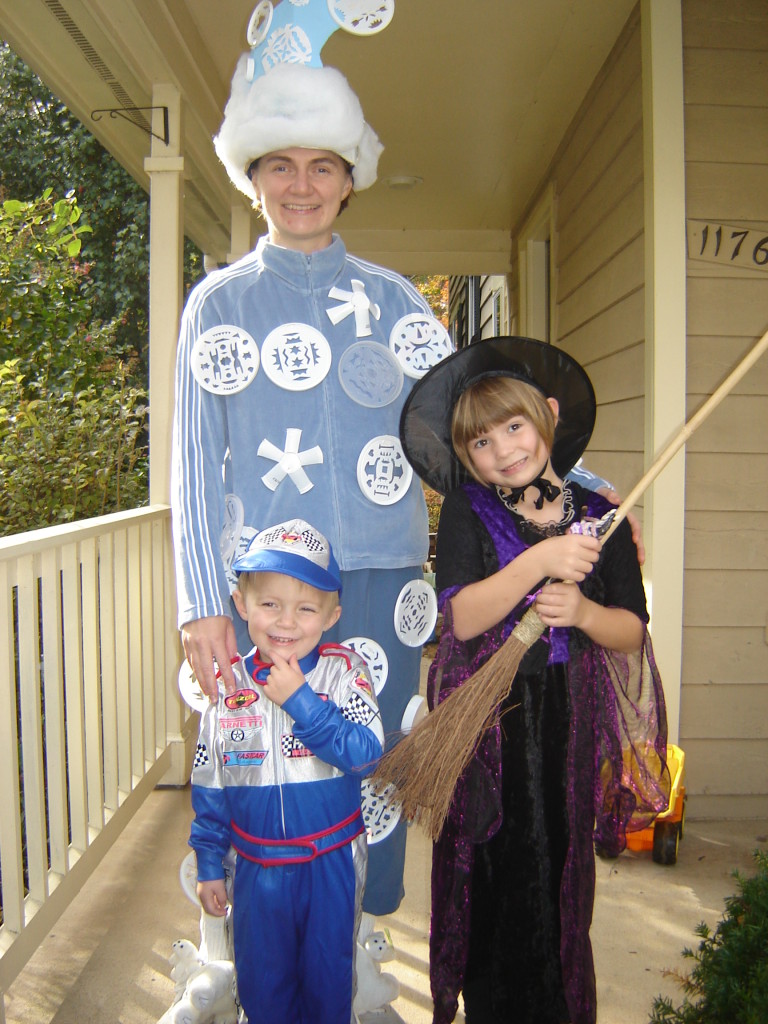 You might remember a video that was popular this year about a double rainbow. I made an mp3 of the audio and played it on a small audio device. My rainbows were cut from a very large cardboard box, painted and decorated with plastic lids. I sewed some straps so I could wear it like a backpack. 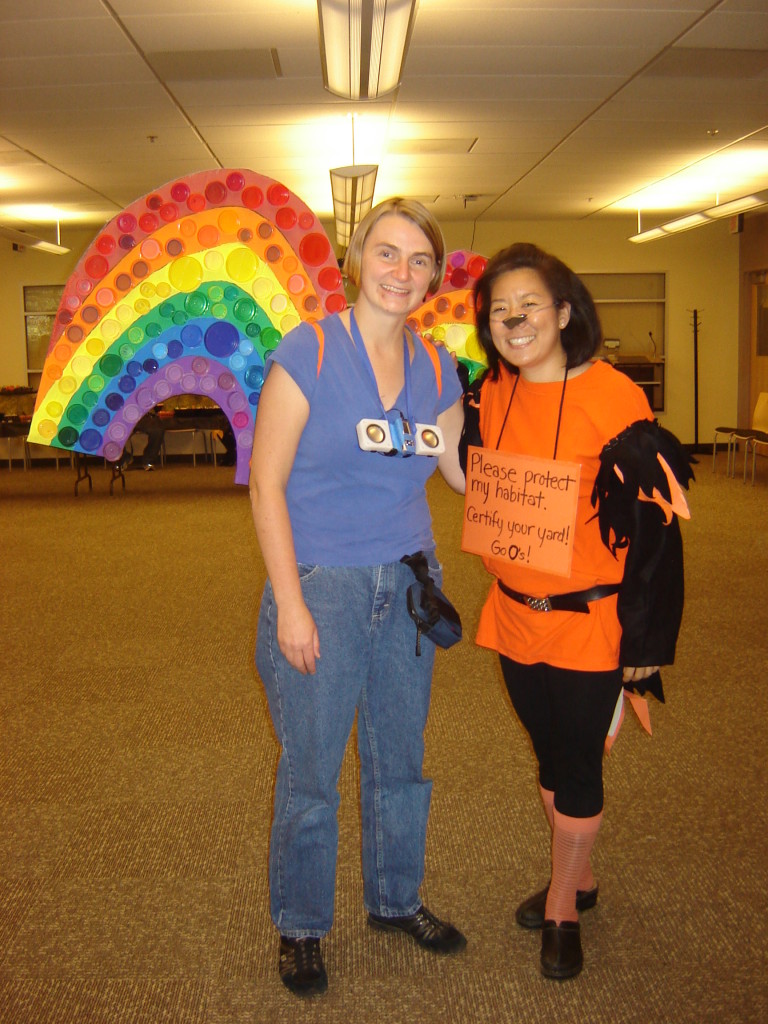 To make this costume, I found some sturdy branches and attached them to a piece of wood with straps so they formed a backpack. Then I covered the branches with packing paper. The seasonal decorations are:

My hat has a shape cut from cardboard for various weather conditions attached like a headband. 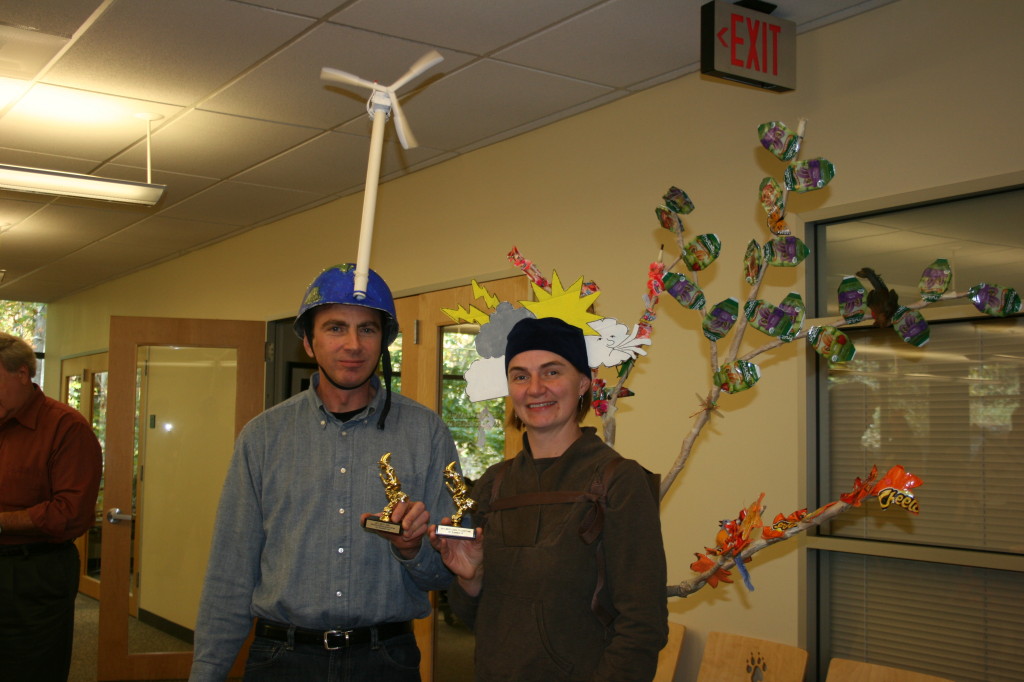 A month before Halloween, I had the honor of visiting PS41, an elementary school in New York City that worked super hard to get a green roof installed. I was so inspired by the experience that I made a Halloween costume of it.

The top of the school was a piece of thick cardboard with a hole cut out for my head. The green fabric for the roof came from an old Tonka tent that Russell destroyed playing with it. I then sewed the four walls of the school hanging down from it using recycled plastic bags for windows and a pair of Bob’s old pants for the walls. The kids were cut from cardboard.

The plant growing out of the roof were made from chocolate wrappers stuck on twist ties, and then jabbed into the cardboard. 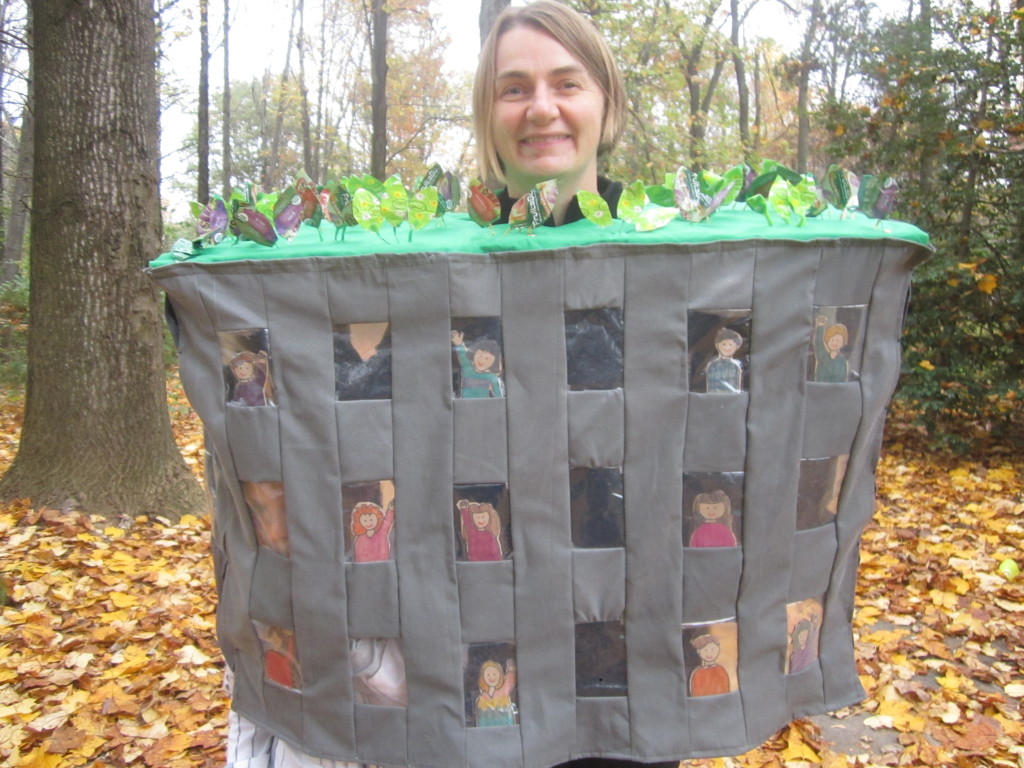 This project took way too much time but it had been in my head for a few years, so I was happy to make it. I made a globe from plastic caps. I had hoped they would just form a globe pretty easily, but unfortunately I found they would cave in a bit so I had to stuff the globe with plastic bags to make it round. It took a LOT of caps. I drilled them in the sides and attached them with twist ties. Learn more how I made a globe from plastic caps.

Atlas was punished by Zeus to carry the weight of the world on his back. Actually, he was supposed to hold up the “celestial spheres” but that is complicated to represent in art, so he is typically shown holding the Earth. 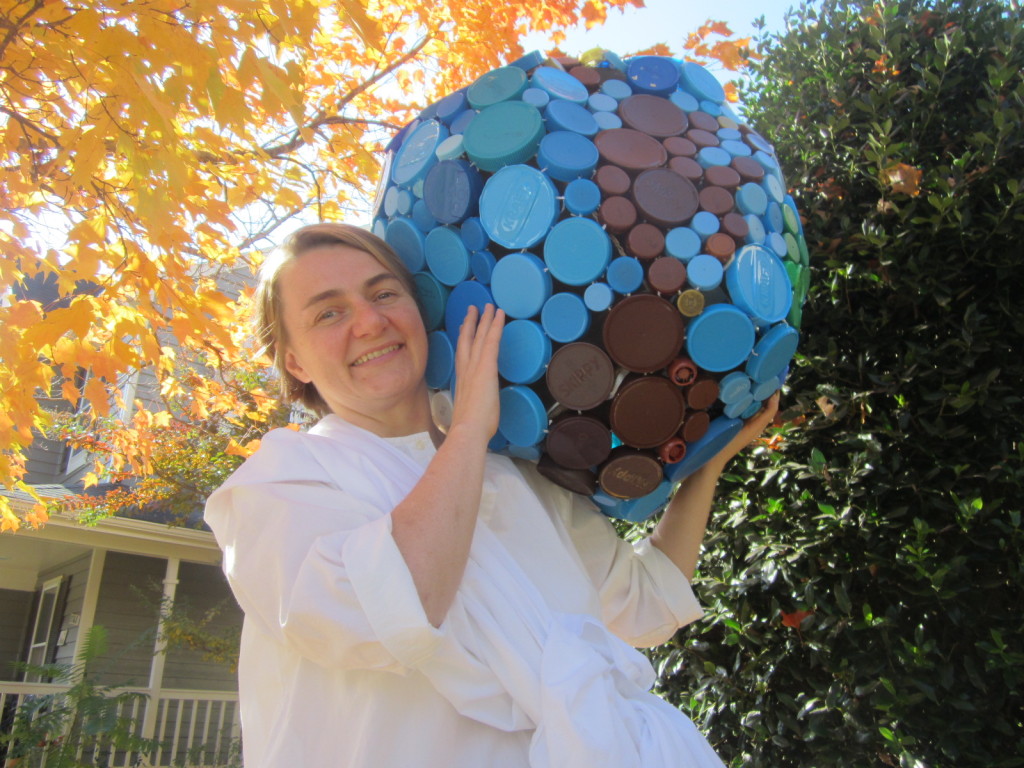 I wonder what costumes I will make from recycled materials in the future?

What costumes have you made from recycled materials?