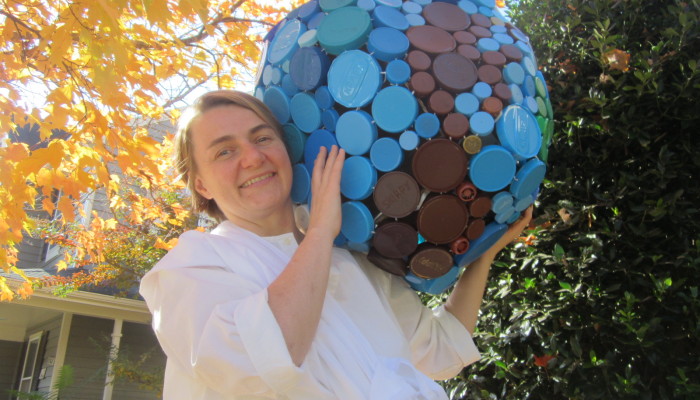 A few years ago, I got an idea to make a globe by drilling holes in plastic caps and attaching them into a sphere. I have a large collection of clean and color-sorted plastic caps from running a recycling center at my work which I use for many plastic cap projects.

Many Trashmagination projects get pushed to the bottom of the to-do list for years unless there is a deadline. So I decided to be Atlas the Greek Titan for Halloween, thus giving myself a deadline. (Atlas actually held up the cosmos, not the Earth, but many sculptures show him carrying a sphere or Earth.)

Creating this plastic cap globe became so time consuming this month, and that is why I have not blogged for three weeks. Every spare moment was spent drilling caps and attaching them with twist ties. 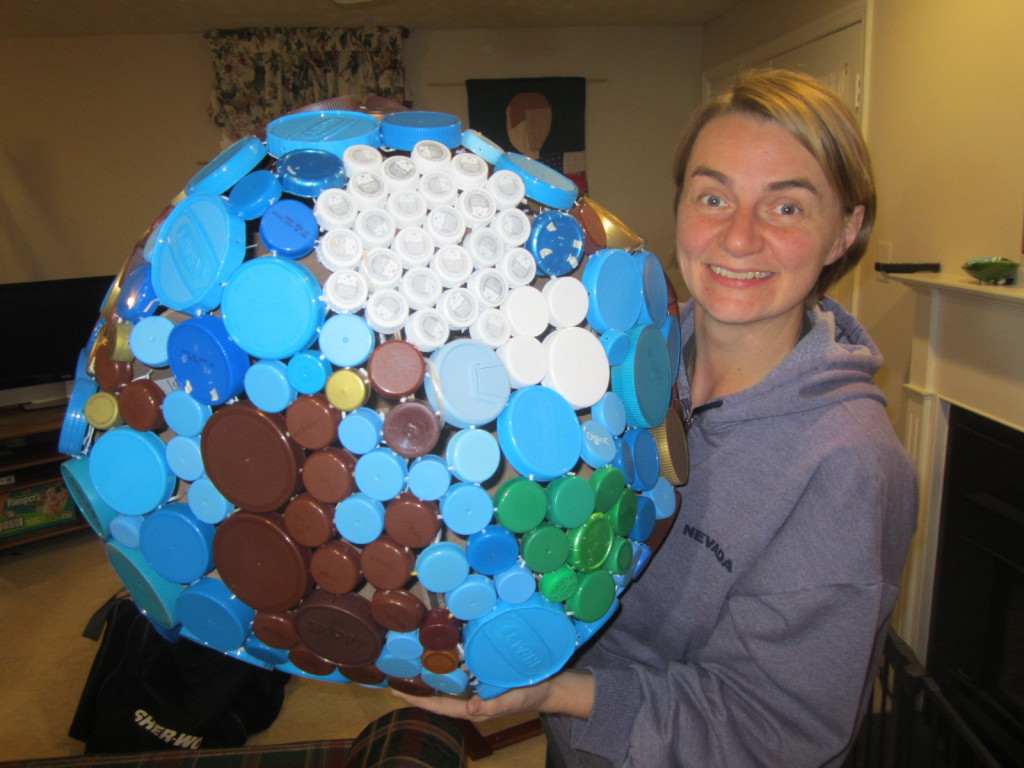 Almost done – check out the North Pole and North America

Figuring Out How to Plan the Cap Layout

This started about a year ago when I made North America and the North Pole. Those two areas took so long to figure out that I was discouraged and put the project aside. I would get the caps all laid out exactly how I wanted them, and then I would pick up one cap to drill it and … uh … where did this go again? And where do I drill?

I tried just drilling each cap six times but that didn’t work well either because the caps are all different sizes and connect at all different angles.

I tried laying out the caps and then putting a layer of contact paper over them to hold them in position, but even just moving my project from one area to the other, the caps all fell off.

I tried laying the caps on a giant whiteboard, tracing their shape. But again, there were so many caps and just when I got one drilled, I would be at a loss where it was supposed to go.

Here’s what finally worked. I got some thin masking tape, the kind you put in a quilt when trying to ensure a quarter-inch seam. I put a tiny piece of tape at each point where I needed to drill the cap. I put a corresponding piece of tape on the caps adjoining the cap. Then I picked up each cap one-by-one, drilled, and then drilled the adjoining ones. Then I connected them all with twist ties.

This photo of the project shows how it worked – check out Greenland (the only green caps on the globe): 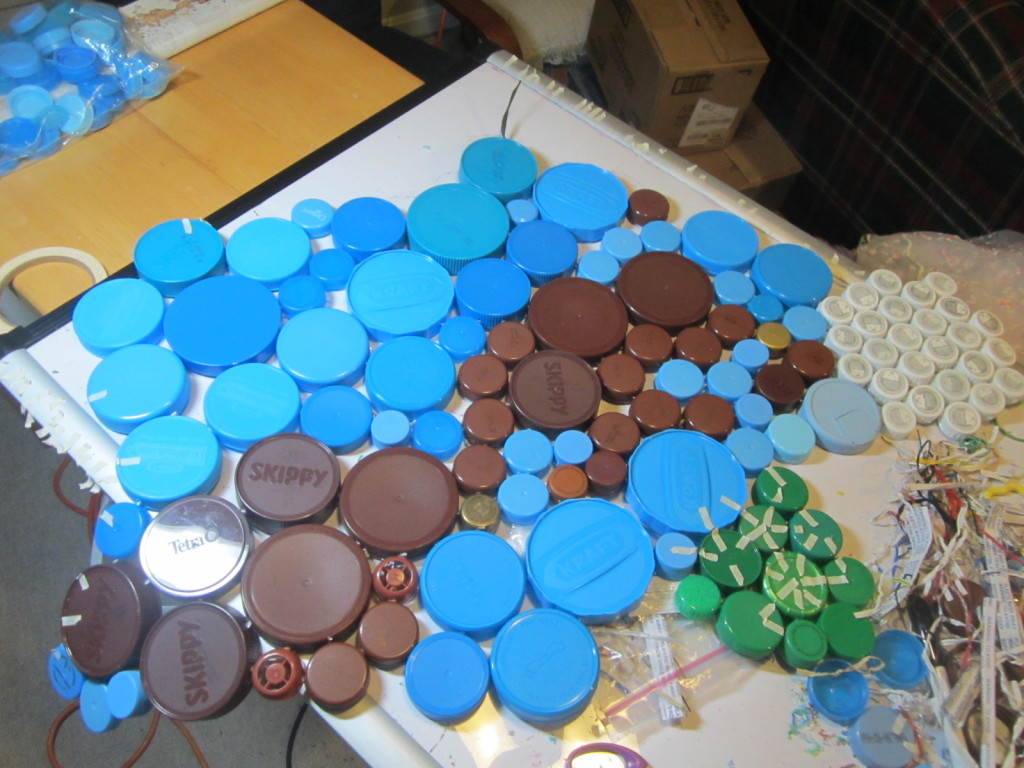 Early in the build – North and South America, Greenland taped on

Flat Surfaces Are Not Curved Surfaces

So once I had the North Pole, North America and South America built, I realized that this might not curve into a sphere as I had hoped. It would curve in one direction, but not a bunch of directions. So basically, it would curve around a tube, but not a ball.

Bob helped me to make the “ribs” of a ball with large cardboard circles. When I first laid the caps on the sphere, it didn’t curve properly at all and I had to take out a bunch of caps to make it work. That was a bad hour.

From that moment, I learned it was best to add caps on to the “live” globe. It was not helpful to make a continent and try to add it later (lesson learned with Asia). This meant I had to do a lot of drilling into caps that were already attached to the project. This was tricky because I could not press them down on to a flat surface. I had to hold them still with one hand while drilling with the other. At first, this was stressful. It’s a large power tool after all. But I soon got very good at it. I managed to drill all those caps without drilling my hand ever. A few times, I had to quickly pull my fingers out of the way, but no injuries.

Here you can see the project almost finished, but showing how the cardboard circles looked inside: 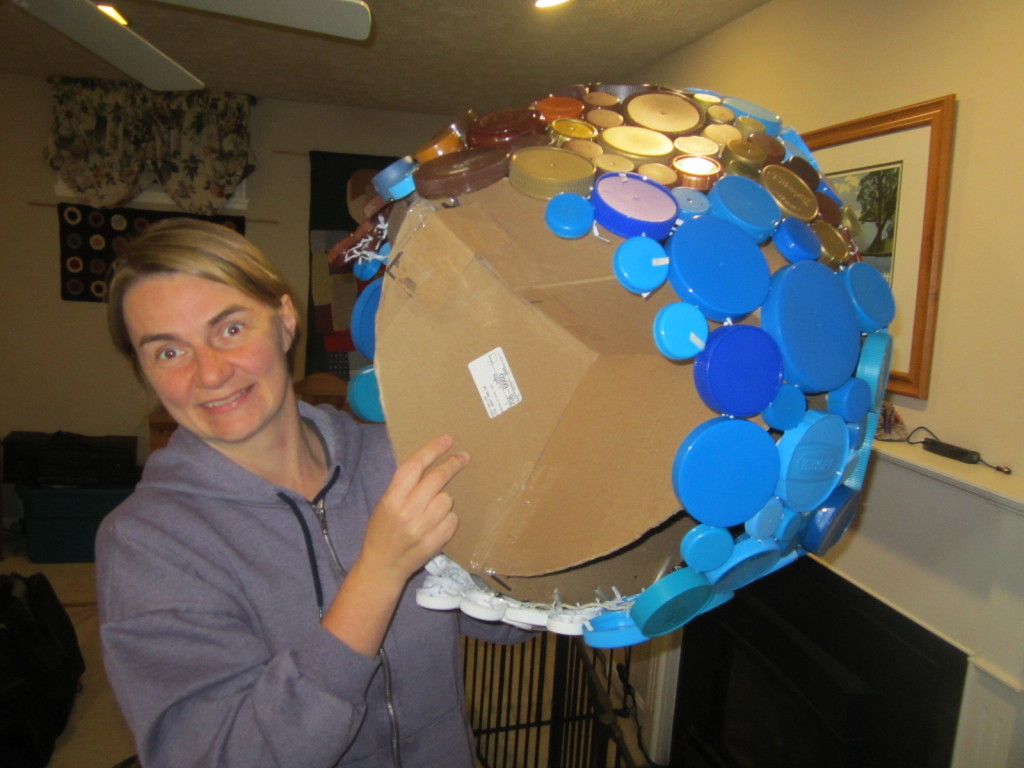 Will I Have Enough Caps?

Another source of concern during the project was whether I would run out of caps. It’s not like I could just run to the craft store for more. But somehow it worked and I did not run out of caps or run to Giant to buy 100 jars of mayonnaise. (Miracle Whip caps are the best size and color.) I did run out of twist ties on the last day and I did take a few from the produce section.

I seem to choose projects that require a lot of repetitive actions, whether it is sewing corks, taking apart a mattress or rug hooking cut-up t-shirts. Maybe it’s some weird value system in my deep brain that says if you persist long enough, it will create value where none existed before. Perseverance is definitely one of my virtues.

The end result was pretty nifty but not as awesome as I had hoped. I was picturing a perfect plump globe, and I got something that is kind of lumpy. I tried stuffing plastic bags in one area to plump it up, but the globe started to get quite heavy. And as Atlas, I had to carry this thing around. I guess I imagined the twist ties would behave differently, that the caps would naturally ping off each other to make a sphere. 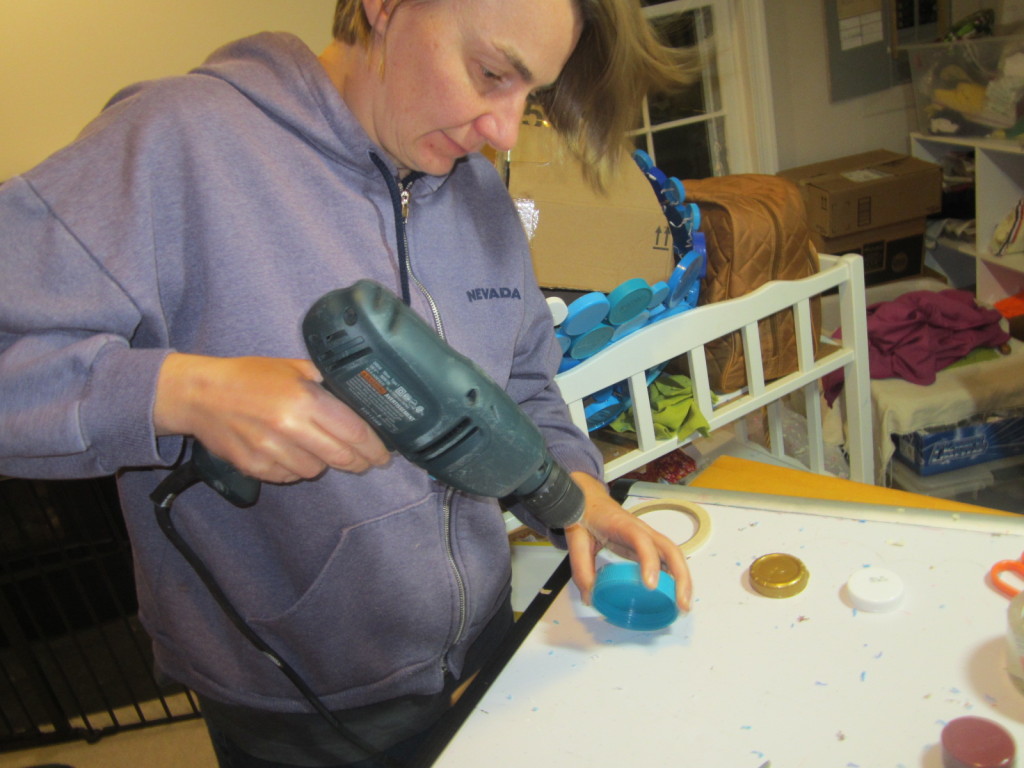 But let’s focus on the positive:

Here’s me in my happy cap drilling mode:

Who knew drilling caps would make me so happy?