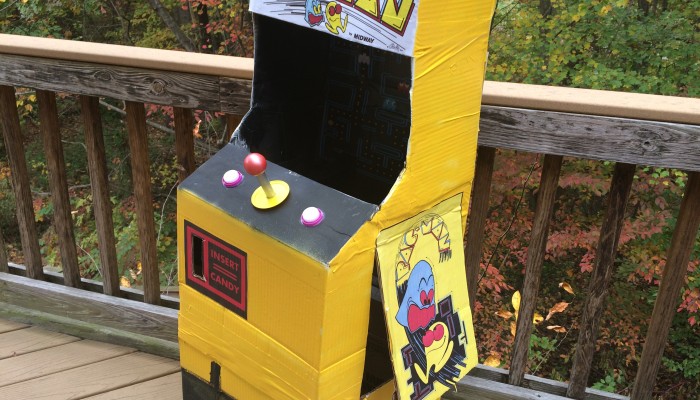 Usually my son likes to dress as a ninja for Halloween. He says he likes the idea of being invisible and like a cat. But this year, he asked if he could be a Pac-Man arcade game. He saw a game called “Hungry Arcade Machine” but he didn’t want to be that character. He wanted to be an arcade game that most people would recognize.

We searched online for Halloween costumes of arcades, and found a few ideas but all for adults. Also, Russell wanted his head to appear where the game play would occur and none were designed like that. So we decided to build one from cardboard boxes. My husband Bob figured it all out.

He got cardboard boxes from our recent Cub Scout popcorn sales, and duct taped them into a tower. He printed out Pac-Man graphics from the original arcade machines. He spray painted the boxes black and yellow. On the sides of the arcade box, he cut two panels so Russell could put his arms out for balance or to pick up snacks. He made two straps inside from duct tape on either side of Russell’s shoulders to make it easier to wear.

Creating the Game Panel and Joystick

Bob wanted to make a joystick that could be moved around and buttons. He made the buttons from plastic caps. He screwed the bottom pink caps to the cardboard box with a nut and bolt, and glued the white one over top. 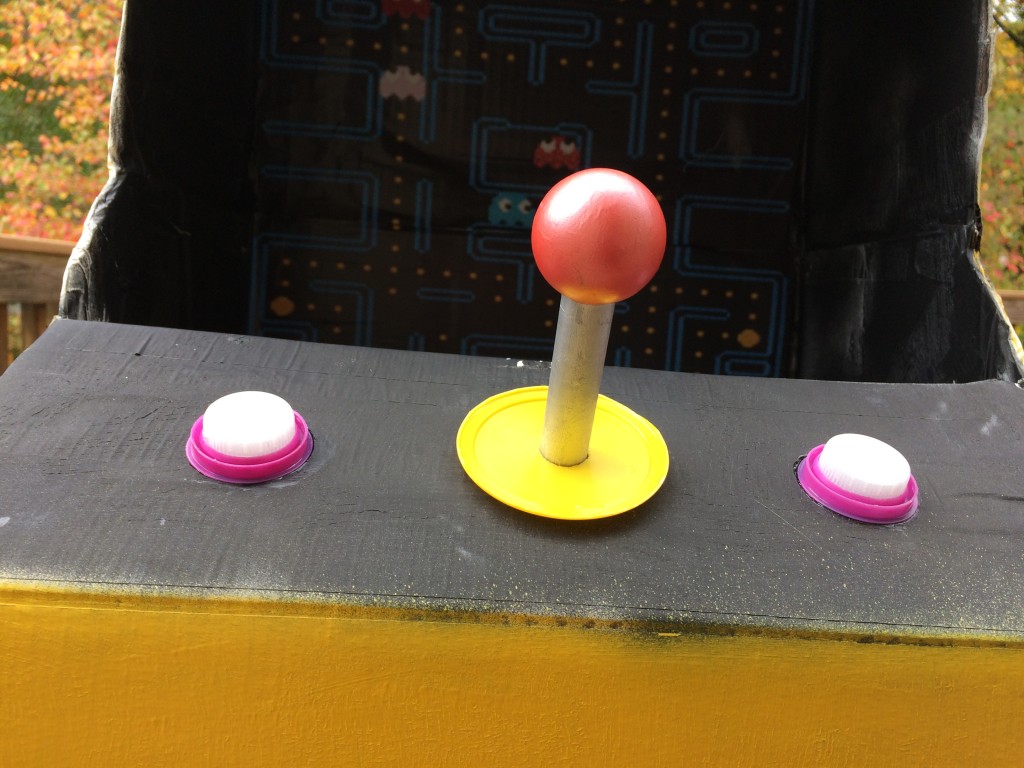 Next he made a joystick:

Russell wore his costume at his Cub Scout meeting, where Bob was leading the meeting. Russell’s costume won for “Most Creative.” 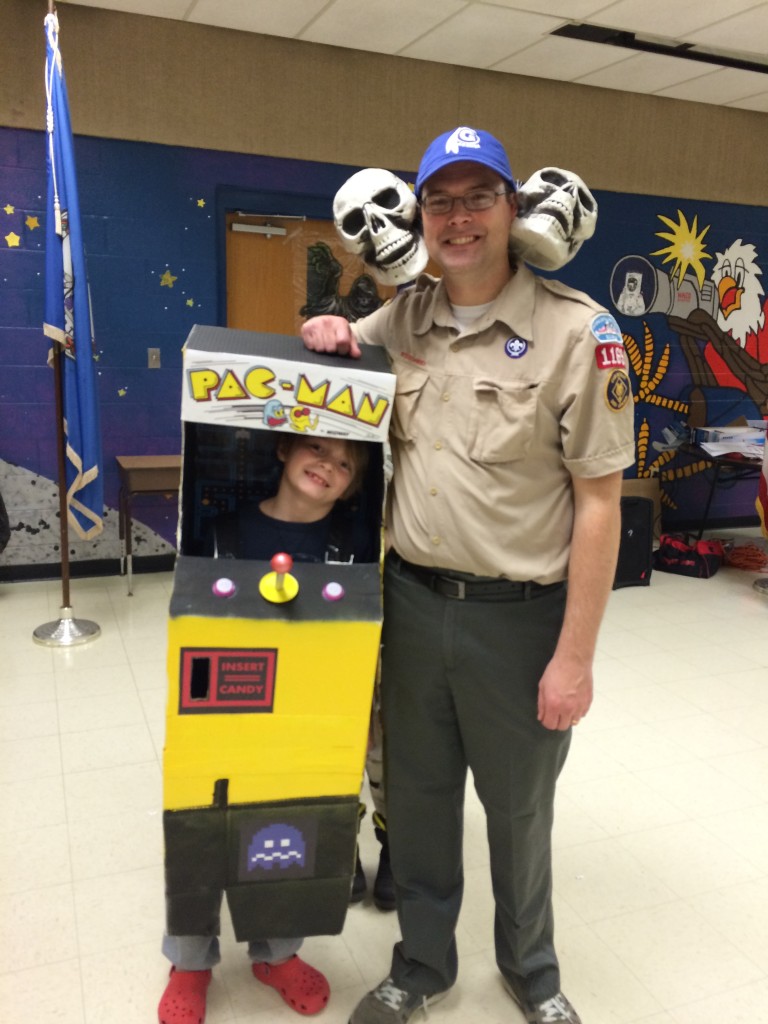 In this photo, you can see the headband I made for him from the neck of a t-shirt. It has a cardboard Pac-Man on one side and a ghost on the other. They hang like earmuffs. 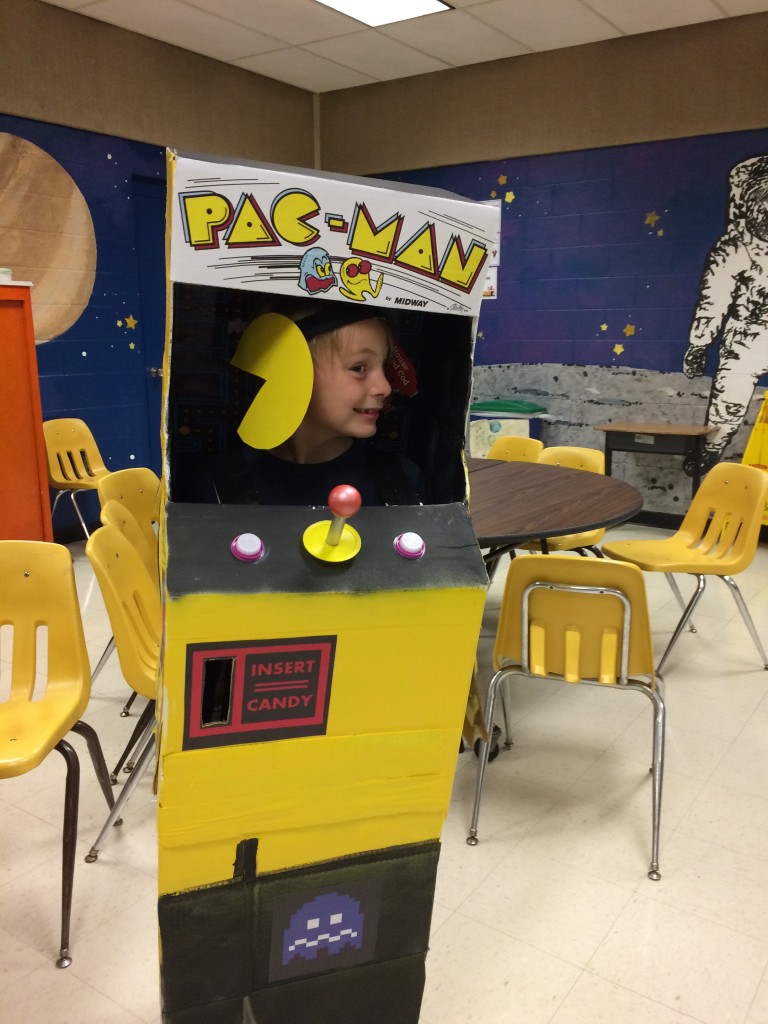 Russell enjoyed wearing his costume, but there was a downside. The other Cub Scouts were SO excited about his costume that they kept milling around him and pulling on the joystick. They also were shoving trash into his “Insert Candy” slot. It was fun at first, but soon became overwhelming. I remember when I used to wear mascot costumes for previous employers, and kids pulled on the tail or whatever loose components they could find. It’s a human reaction, I guess, to want to grab that joystick, since it is normally a hands-on device. I had to walk around with Russell and remind boys to keep their hands to themselves. He was a little frustrated by that experience, but hopefully it will be less of an issue on Halloween night. 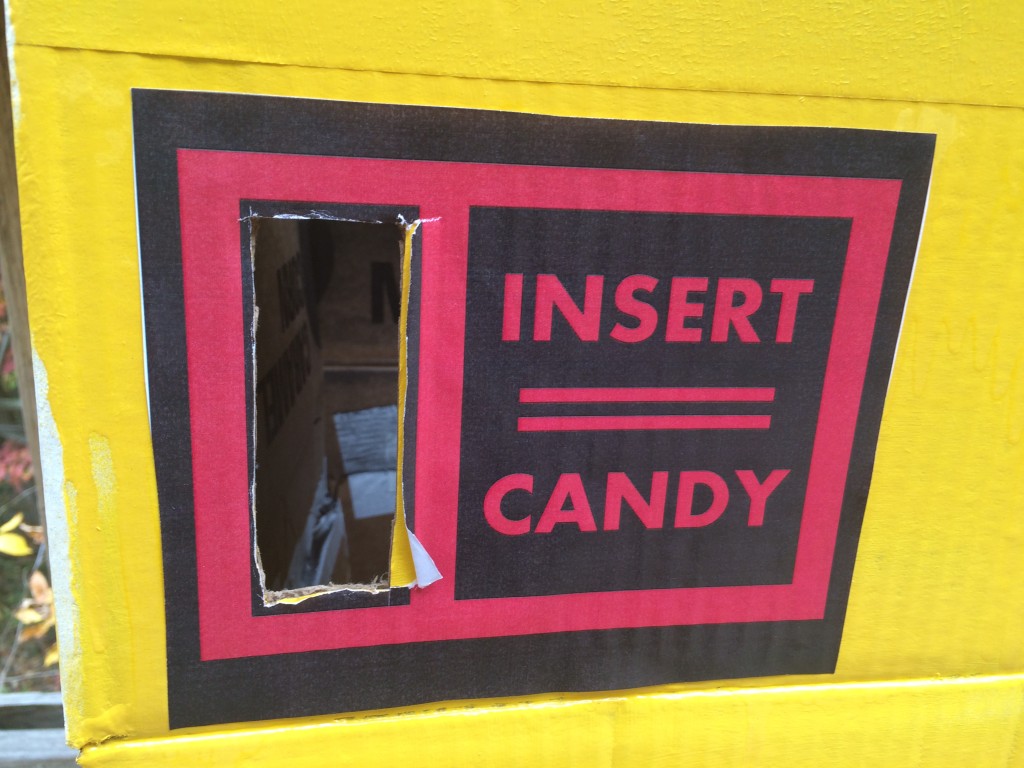 Russell is very pleased with his Halloween costume and Bob had a lot of fun building it. It’s great when my family does Trashmagination projects without much help from me!