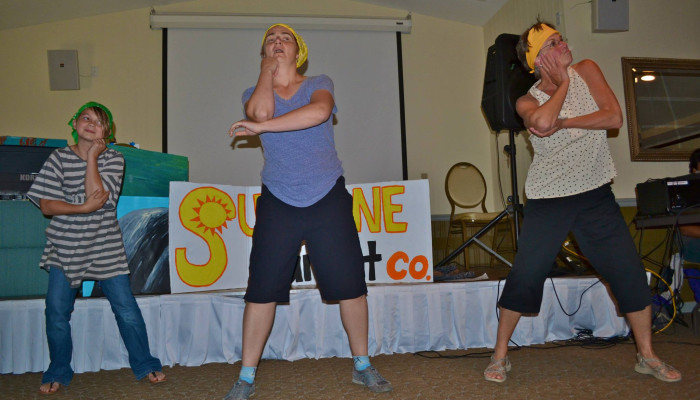 Today is my mom’s birthday and we are lucky to be together for her birthday!

Mom is always keen about Trashmagination and my other projects. Just to illustrate the lengths to which she will go to show her support, let me tell you about an event at last week’s Family Nature Summit.

First – some background: When I was in high school, I liked participating in lip sync contests. Walking On Sunshine by Katrina and the Waves was one song that I performed. I made a big sign that said “Sunshine Carpet Company,” dressed up like a cleaning lady with a kerchief on my head and borrowed my sister’s yellow carpet. When the song came on, I acted like I was the only person in the place, cleaning after everyone had gone home, and rocked it out with my broom as my guitar.

A few weeks before the Summit, Nora and I were driving and the song Walking On Sunshine came on the radio. Every time I hear that song I get a big smile on my face so I told Nora about what I did in high school. She said, “That sounds like fun!” I suggested that perhaps we could do the act together at the Family Nature Summits talent show that was coming up. Nora was keen, so we planned our dance steps, made our costumes, painted our “Sunshine Carpet Company” sign and practiced.

When we arrived at the Summit, Nora got nervous about performing in front of a crowd – and rightfully so, because it was a pretty brave thing to do when you are nine years old. I told her that was no problem, I only wanted her to dance if she wanted to. I could tell she was really on the fence because she kept changing her mind about whether to perform.

The afternoon before the talent show, my mom asked to see a dry run in our hotel room. My mom’s toes started tapping and quickly she asked if she could do the act with me. At first, I was concerned because Nora and I had practiced for two weeks, we had only two costumes, and the show was in an hour. Then Mom suggested to Nora, “If I join the dance, will you dance too?” She also offered to paint Nora’s toes if she danced. We agreed to toss our costumes. That was enough. We were now an act of three generations.

Performing in the Talent Show

We were the first comedy act so the Summit participants reacted with lots of laughter and noise. The dance was a blur. But luckily, we got these photos from the Summit photographer and my dad: 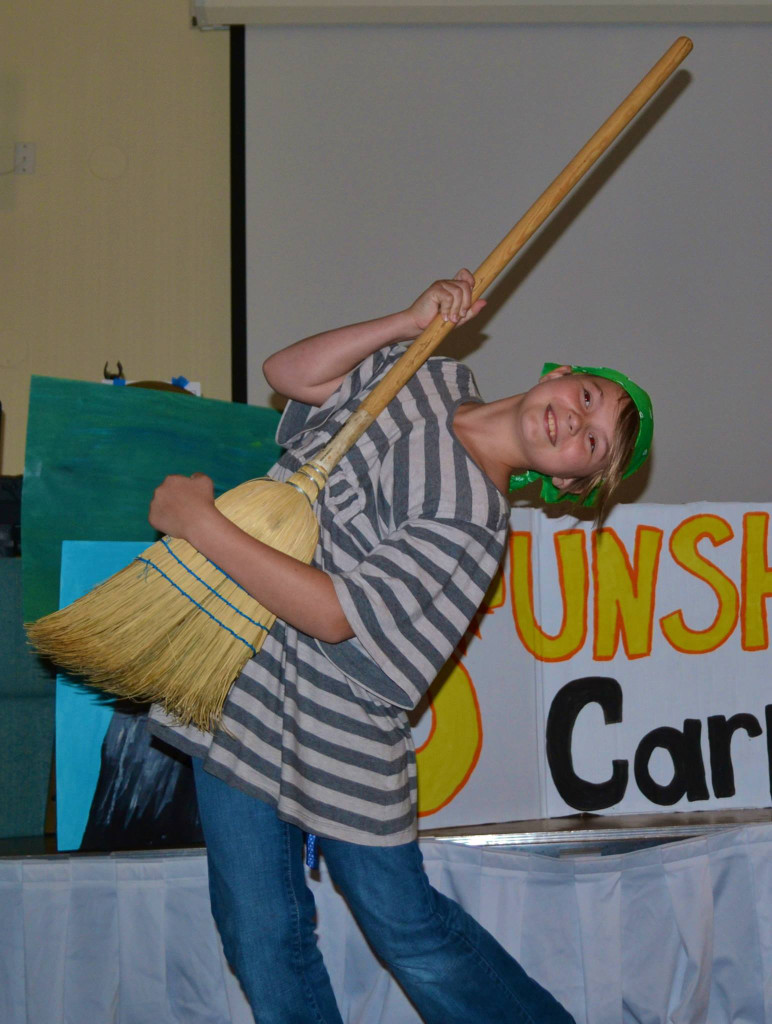 Doesn’t Nora look exquisitely beautiful and happy in this photo?

Afterwards lots of people said how special it was to have three generations of a family in one act, and they also praised Mom for being an example to all the grandmas in the room for her energy. Little did they know that she learned the steps only minutes before. 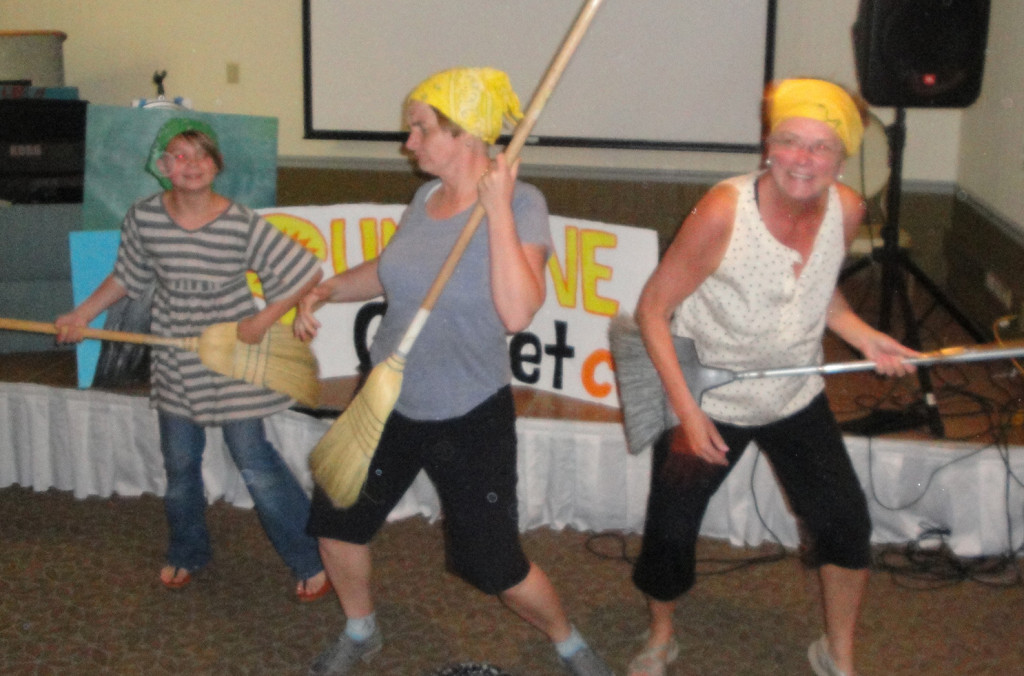 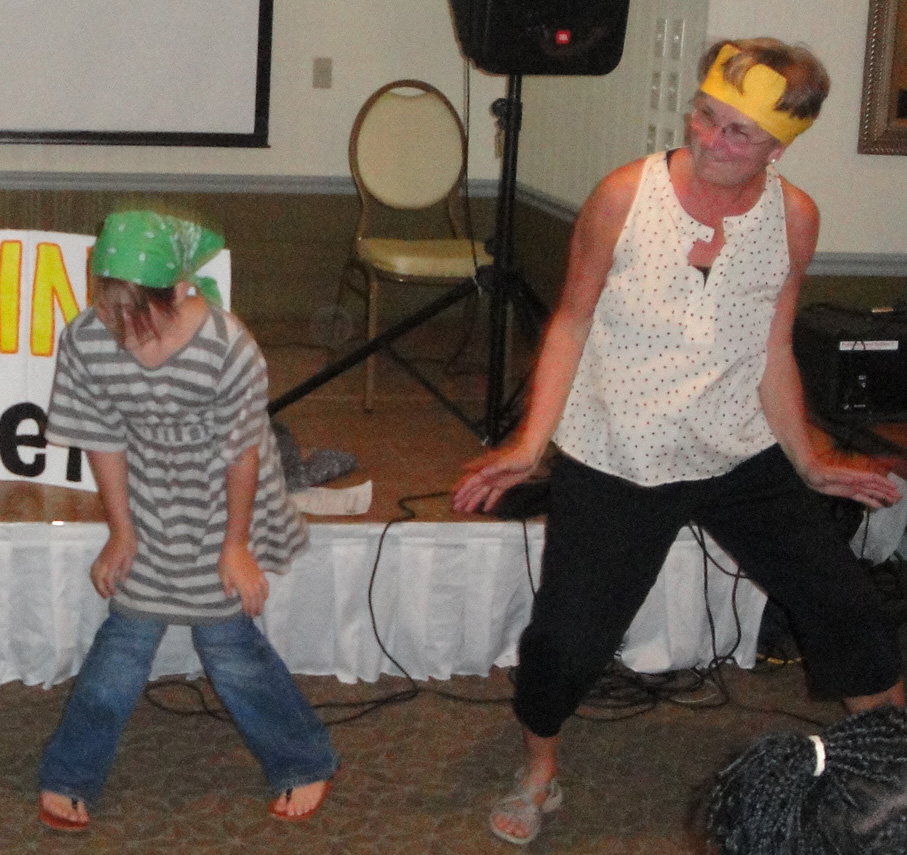 Nora and Mom dancing to the lyric “gotta hold myself down”

After the show, Nora went to Nana’s room to get her toes painted pink. We also gave her a scarf that she had been eyeing in the Summit store. We were so proud that she took a chance and had a great time. But it would not have happened if not for her amazing Nana.

I hope she remembers my Mom’s example whenever she is faced with an opportunity to have fun and push herself. Just try your best, throw on a kerchief, grab a broom and improvise!