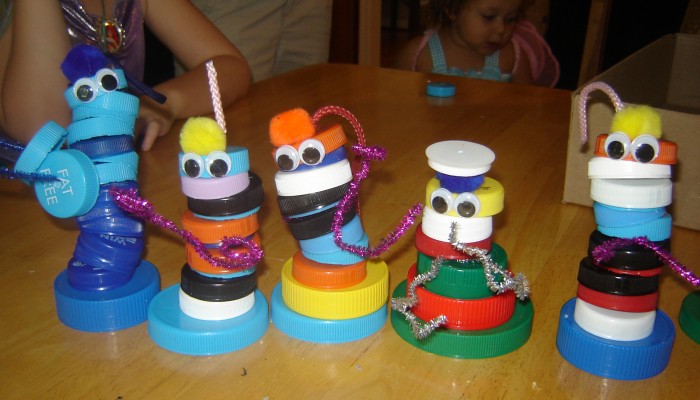 Recycling plastics can be confusing, and it varies from one county to another. In places where plastic recycling is strict, you can jeopardize whether a load gets recycled by how much “contamination” is in it, i.e. how much plastic of other types are mixed in.

To make this more confusing, I learned that often the cap is a different type of plastic than the bottle itself, so you should not put the cap in the recycling bin.

Then I heard about a program by Aveda where they will recycle your plastic caps of most types. This is a generous green service by a green company. So at work, I put out bins for plastic caps and encouraged by co-workers to separate their caps from their bottles.

Very quickly, I was overwhelmed with plastic caps. People drink a lot of drinks from plastic containers. We took thousands of caps to Aveda.

But along the way, all the caps in boxes tickled my “trashmagination brain.” The caps come in so many shapes and colors, and there are SO many.

To drill the caps, we put on a rubber-dipped garden glove. This improves your grip on the caps and protects your hand if the drill slips a bit. To drill the cap, we place it on an old scrap of 2×4 wood. This protects your working surface once the drill gets through the cap. We hold the cap with our gloved hand and then press down on the cap with the drill. It’s a good idea to wear protective goggles if you don’t wear glasses already.

It’s a great work-out for your drilling arm. I recommend it also if you have had a frustrating day and need to work out those feelings.

Which Plastic Caps Work the Best?

We learned a lot about drilling caps with a large drill bit. There are basically four “hardness” levels for caps:

Just the fact that caps drill differently illustrates yet again why caps could easily contaminate a plastic recycling program. They are clearly made from all different types of plastic.

The first project we did was plastic cap robots. My daughter requested a Wall-e birthday party (actually, it was about “Eve,” the female robot from that movie.) I was looking for crafts for the party. My husband and dad figured out how to safely drill a hole in plastic caps with a large drill bit. We wanted something at least ½ inch wide – large enough that small children could easily thread a cord through it.

Once the caps are drilled, I prepare the caps for an event like a birthday party by glueing large googly eyes on some caps. These form the “heads” of the final craft, whether it is a robot or what we later called them – “caperpillars.” We also added a small pompom on the top for a bit more fun. If you were doing this activity with children under age 4, you might want to forgo the eyes and pompoms because they might swallow those items.

Another tip – to make the cords easier to thread, we put a small piece of tape on the end and formed it into a point.

I have done this activity at many tabling events and kids love it. I have seen older children make the product more complicated by building rainbow caperpillars. They carefully chose their caps to make a nice rainbow spectrum. Older children have also made it more complex by placing the caps in sequence of size so the final product goes in and out.

More recently, I have tried to refine this craft by using a punch instead of a drill to make the holes. I was concerned that the holes in the caps sometimes have jagged edges. They are not so jagged to cut a finger, but they don’t look great, and sometimes the little bits of plastic make it more difficult to sew. The punches work best on the soft grade caps, like the milk jug style, but are too difficult to punch through on the other types.

I have also tried crafts where I drill into the sides of the caps, so the caps could be sewn together flat. This is more difficult and does not work with a large drill bit.

I have thought about getting a drill press, because drilling large quantities of caps for tabling events can get quite tiring for your drilling arm. We haven’t made this investment yet but maybe some day.