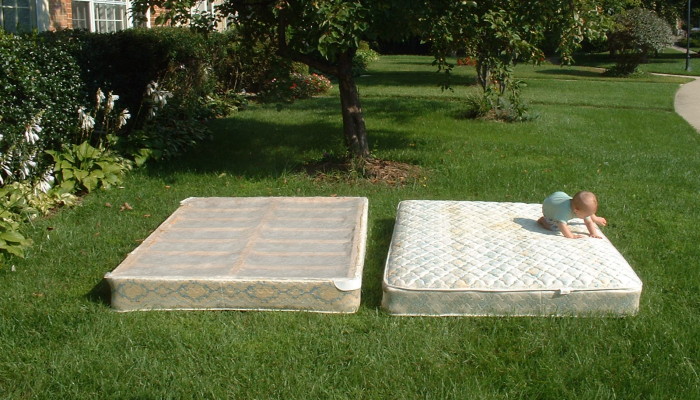 In 2004, I was reading a book called Conscious Style Home by Danny Seo. He describes taking apart a mattress to its component parts for recycling. I found that idea so intriguing – especially the idea that you could fit that mattress into a single garbage bag, once you had recycled all the other components. I wanted to give it a try. My co-worker Erik was throwing out an old mattress and box spring, and he delivered it to my front porch.

(On a side note, now I see that Danny Seo sells a “mattress in a box” which is an intriguing idea as well.)

It was August in Virginia, definitely not the ideal season to be working hard outside. My daughter was about to turn one, and so she was a handful. But I proceeded to take apart that mattress and box spring on my front lawn (because we don’t have a flat backyard). I had no idea how to do it, but I figured I would experiment.

Step 1: Remove the cord from the edge of the mattress

I just pulled hard and it came off. It helps that it was an older mattress, so the fabric gave way easily. 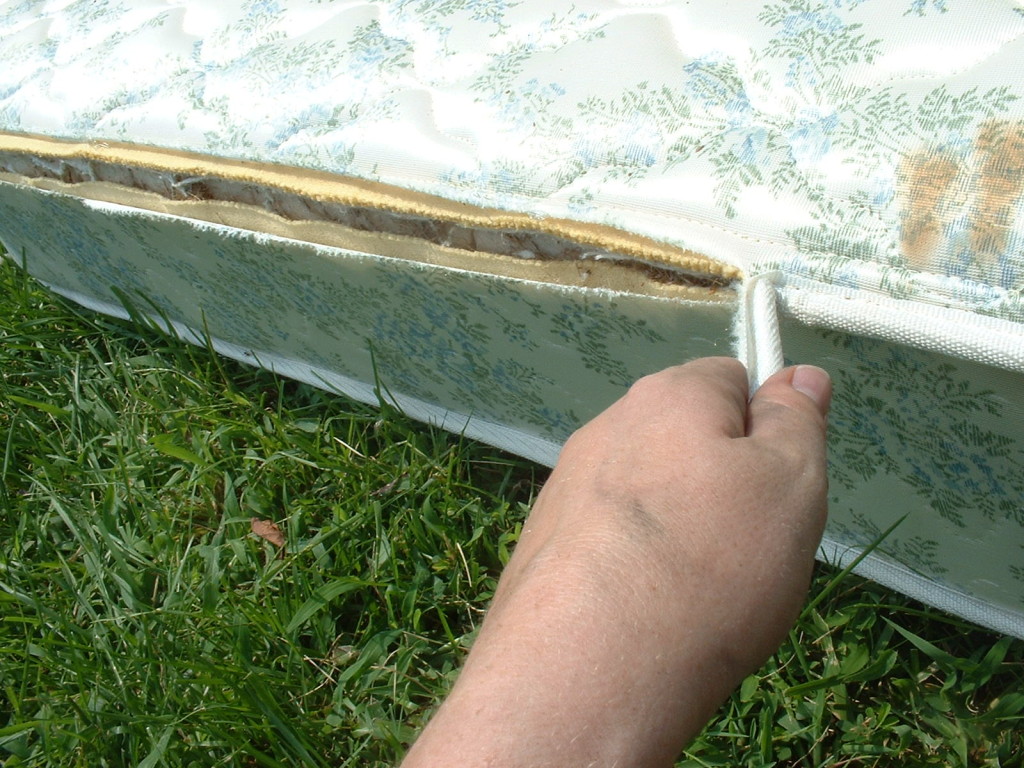 Removing the cord from the edge of the mattress

Step 2: Remove the sides from the mattress 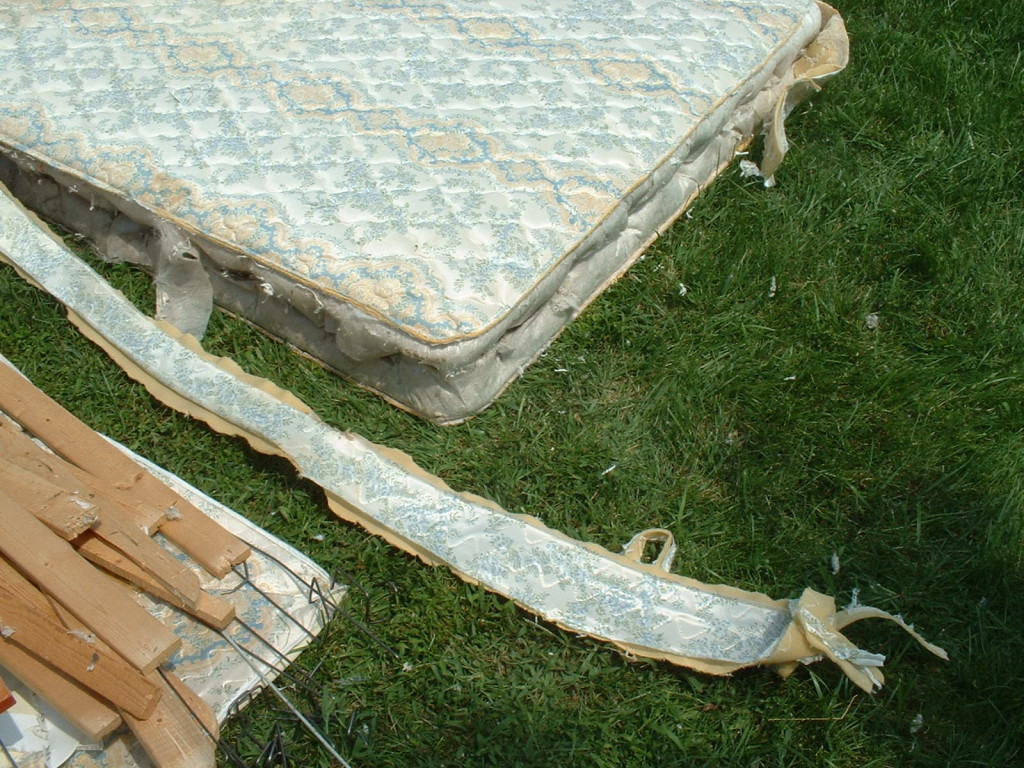 Remove the side fabric from the mattress

Step 3: Pull back the mattress fabric and gather up the fluffy stuff underneath

There are a few staples here and there that you will need to snip, and then you will see there is a layer of fluffy stuff just below the outer cover. At the time, I hoped it would compost, and I put some in my composter. But in fact, it did not compost (perhaps it would in an industrial compost instead of my home one) and in fact, a bunch of bees decided to build their home in that stuff, which resulted in lots of drama that I will not discuss here (but thank you to my patient husband for dealing with that). So I recommend not composting that stuff and I think it will go into a bag and be thrown out because it’s pretty nasty stuff. 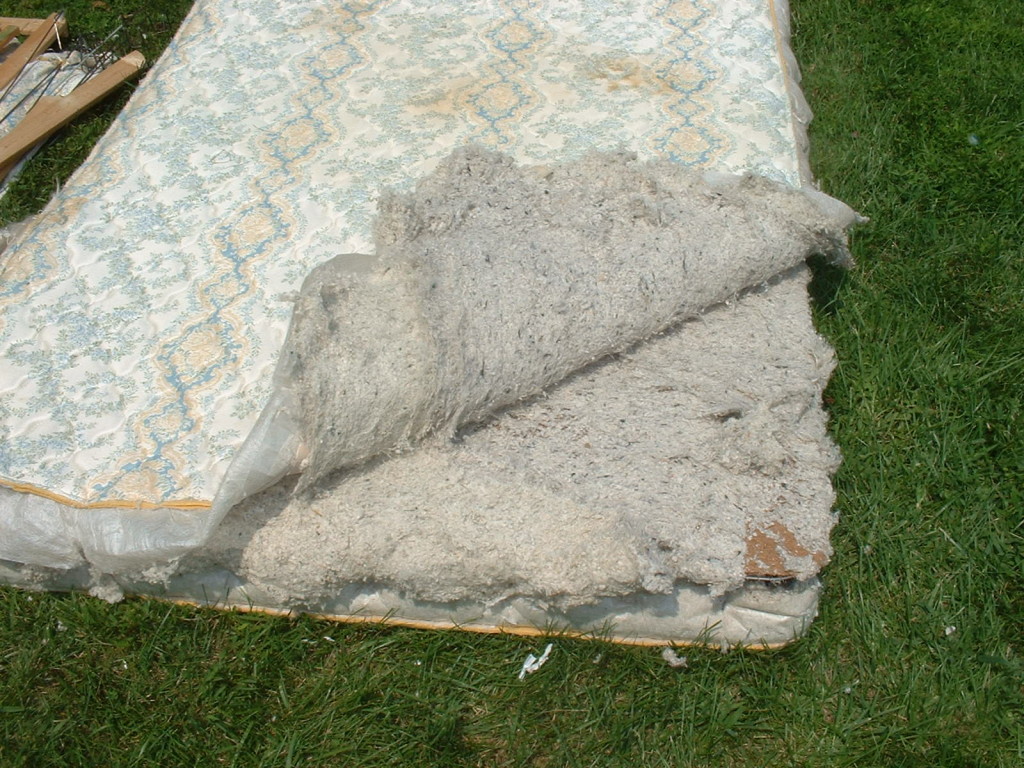 Layers of fiber inside the mattress

Under that gross fluffy stuff is a layer of brown stuff that I believe is called “coir” and comes from coconuts. This does break down, and I used it as a weed deterrent in my garden. I layed it in my garden and sprinkled mulch over it. Over time, it disappeared, and I believe it also reduced weeds that summer because it’s like a blanket that allows water through. 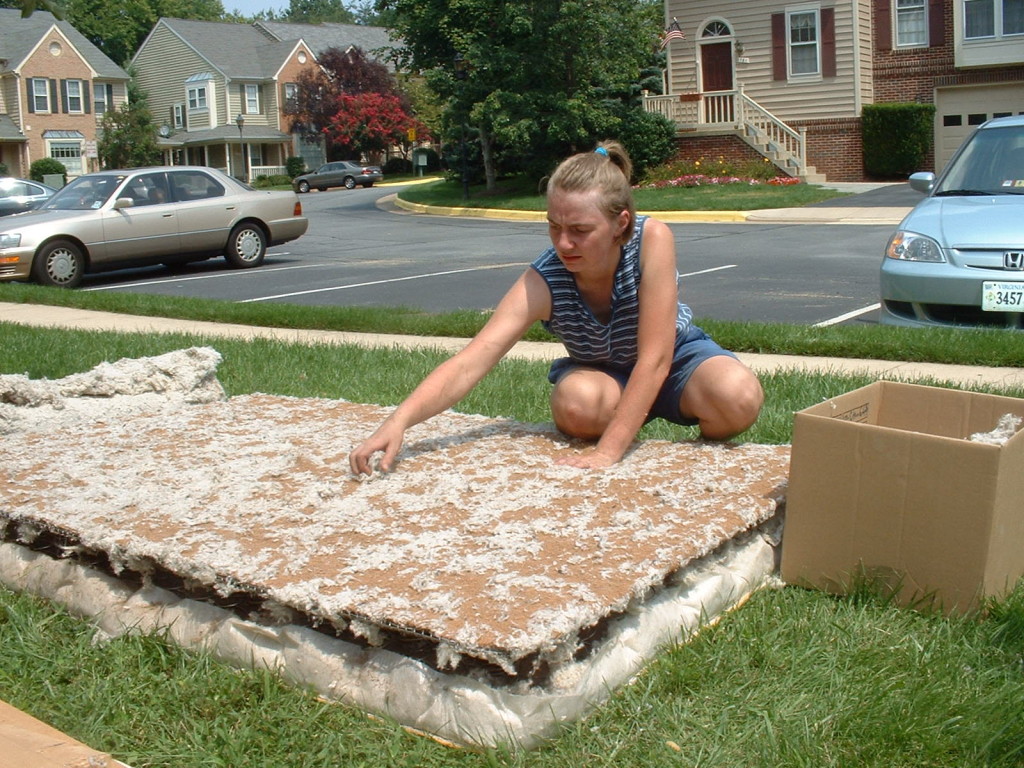 Step 5: Bring the metal spring insides to the metal recycling

Finally, I was left with the metal springs and the mattress cover. I still have the cover folded up in a box. I have not figured out the perfect project for it. I tried dying it, but it was all synthetic fibers, so it did not take the dye well. It is incredibly sturdy, so I imagine using it as a base for something that needs to be strong.

The metal springs would not fit into our car, so my husband and I took it apart by twisting certain connector wires with our pliers. Once it was in 3-4 pieces, we could fit it in the trunk of our car and we took it to metal recycling. I have a few springs I saved because I think they could be very cool candle holders, but the challenge is that the metal gives off some kind of grease when you touch it, so I would need to degrease those things first. 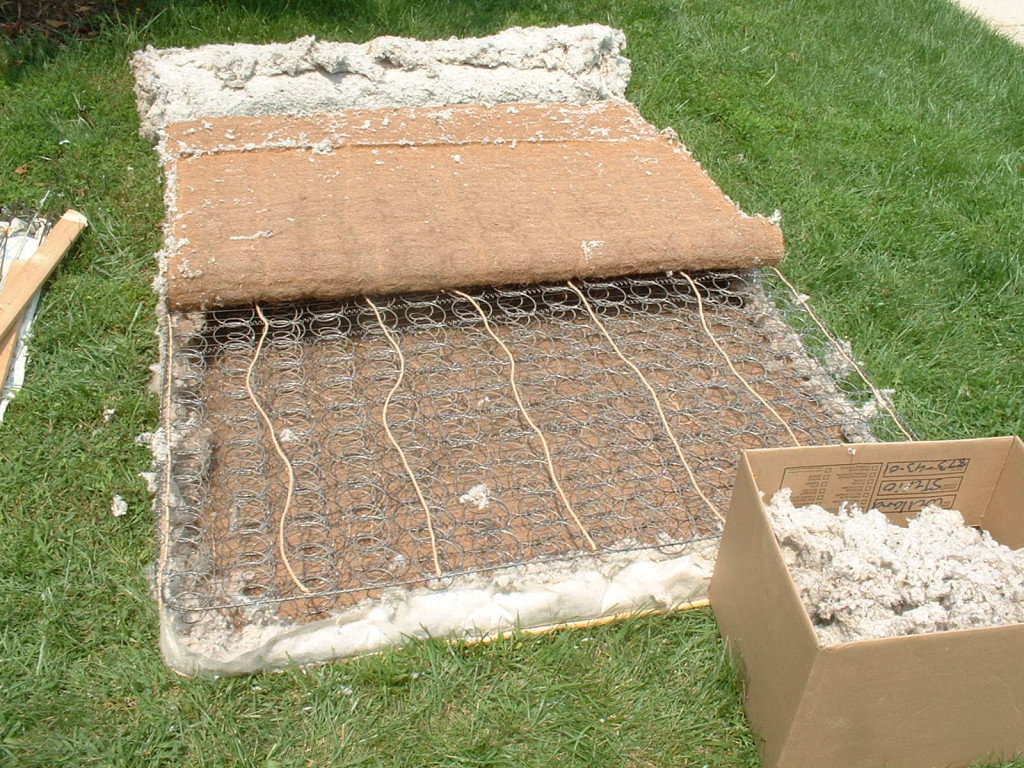 Mattress with the coir layer pulled back – metal springs visible

Step 6: Tackle the box spring by removing the staples and plastic corners 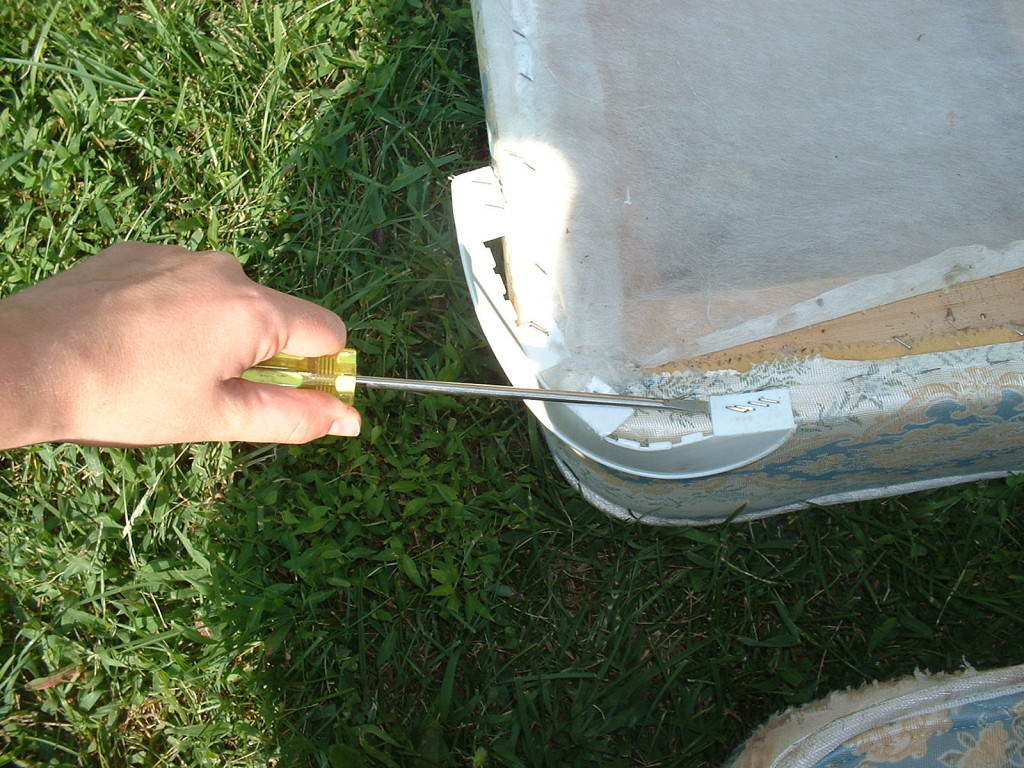 Step 7: Pull out as many staples as you can with pliers

This was tricep-building work, and the more thorough you are, the more likely you can re-use the wood components. 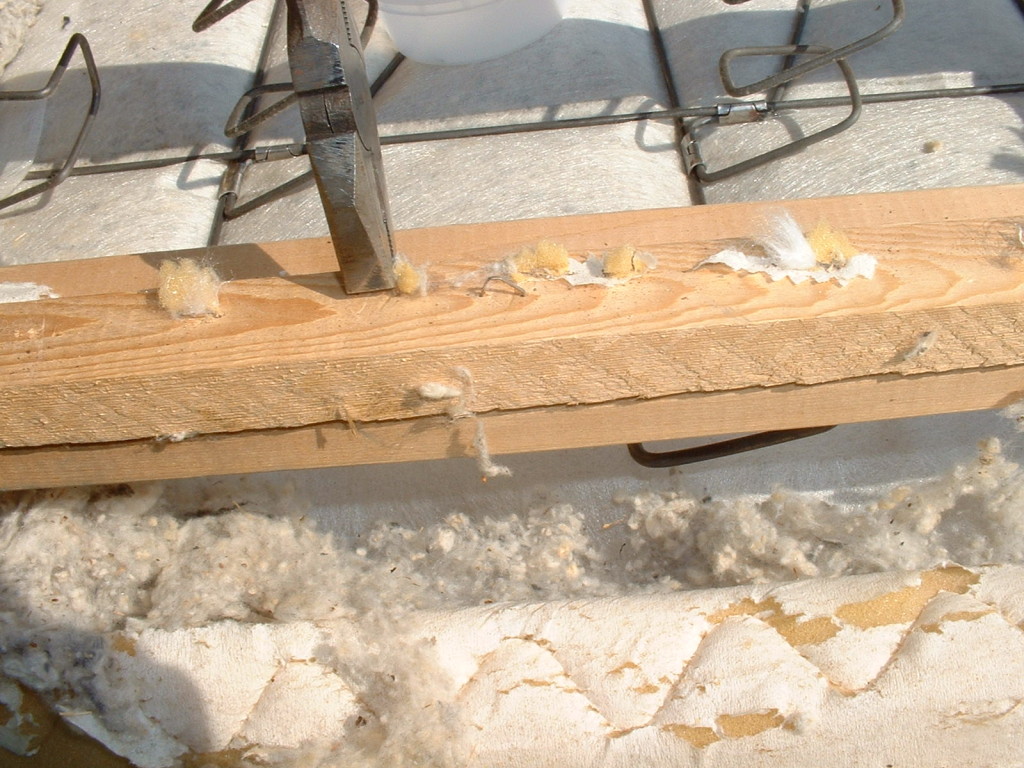 Step 8: Lift off the wood and metal components

Roll up that nasty fluffy stuff again (I think it’s going to the trash – sorry), and prep the metal for the metal recycling. The wood – we ended up using for various random projects around the garden. 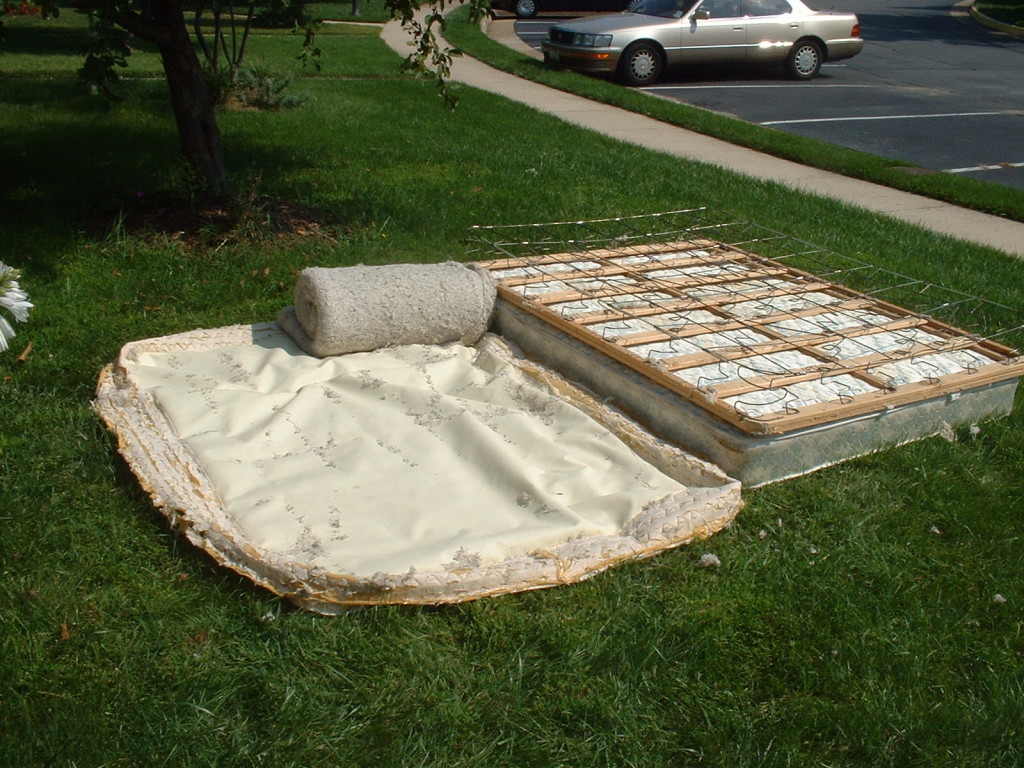 Rolling up the padding in the box spring

Step 9: Take apart the metal components of the box spring

Like the metal in the mattress, we needed to break up the box spring metal into smaller chunks for transport to the metal recycling. There were these metal fasteners that we needed to jimmy open with a screwdriver. 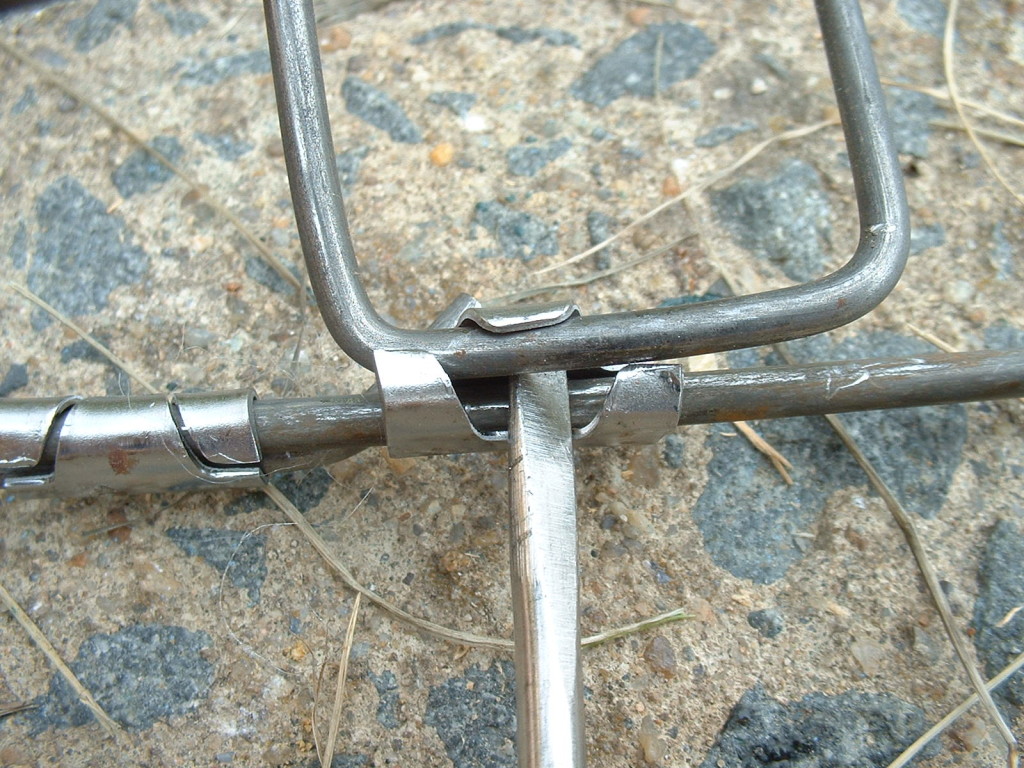 I do not recommend August in Virginia as the best time or place for this project. But weirdly, I was very pleased to break down that mattress and box spring, so that only a single garbage bag would go to landfill. 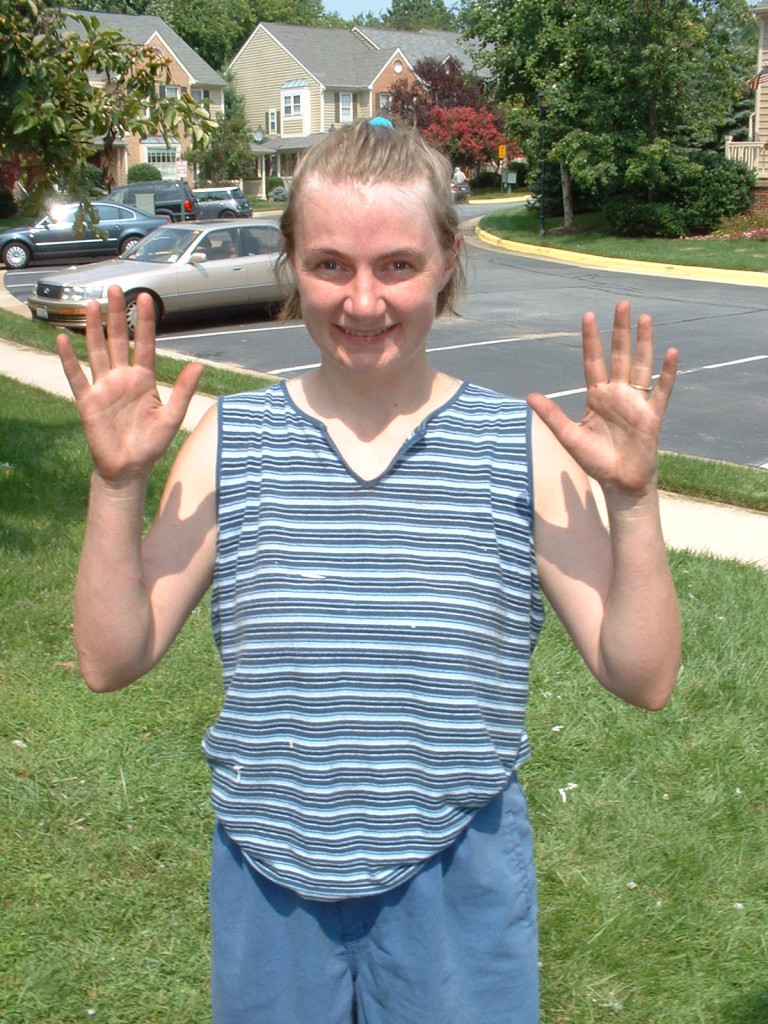 Filthy hands after taking apart a mattress and box spring

What Crazy Recycling Project Did You Take On?

I really don’t know if this was a useful project for me to take on, but for some reason I was compelled to give it a try. I certainly have a clearer idea of what is inside a mattress.

Have you ever taken on a huge recycling project and then wondered why?