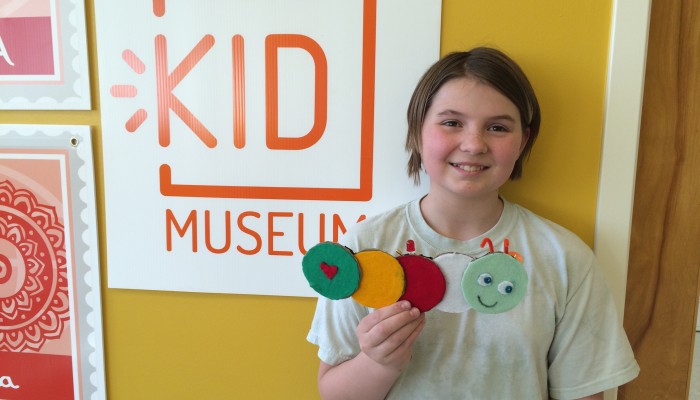 Today we checked out the new KID Museum in Bethesda with our friends Keith, Noah, Luke & Jillian who are visiting from Indiana. We registered for a workshop called Light Up Critters, where the kids were given a light on a tilt switch that would turn on and off as you tilt it. We arrived an hour before the workshop to see the rest of the museum first. 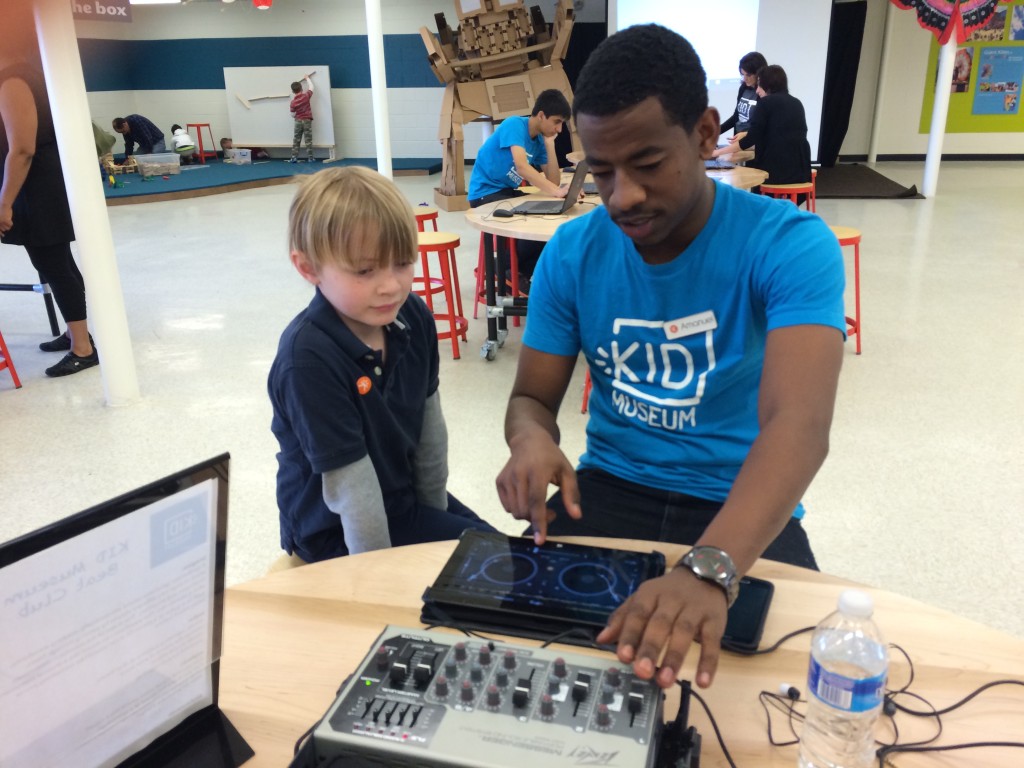 It is located downstairs in the Davis Library in a huge sunny room. There are stations with a keen staff person at each one. Russell’s favorite station was a beat box station where you can take songs and mix them using a computer. He asked to take a summer camp in this topic actually, and I have registered him for a summer camp at the KID Museum on this theme. The guy at that station, Amanuel, was super patient with Russell. They even pulled up from the internet some electronic music that Russell loves. He has found certain artists who he admires.

Noah checks out a zoetrope or device for making simple animation

Nora, Noah & Luke went to the animation station, where you could draw a series of small images on a long strip of paper and put it in a zoetrope, or a spinning thing with small windows that makes your images look animated. 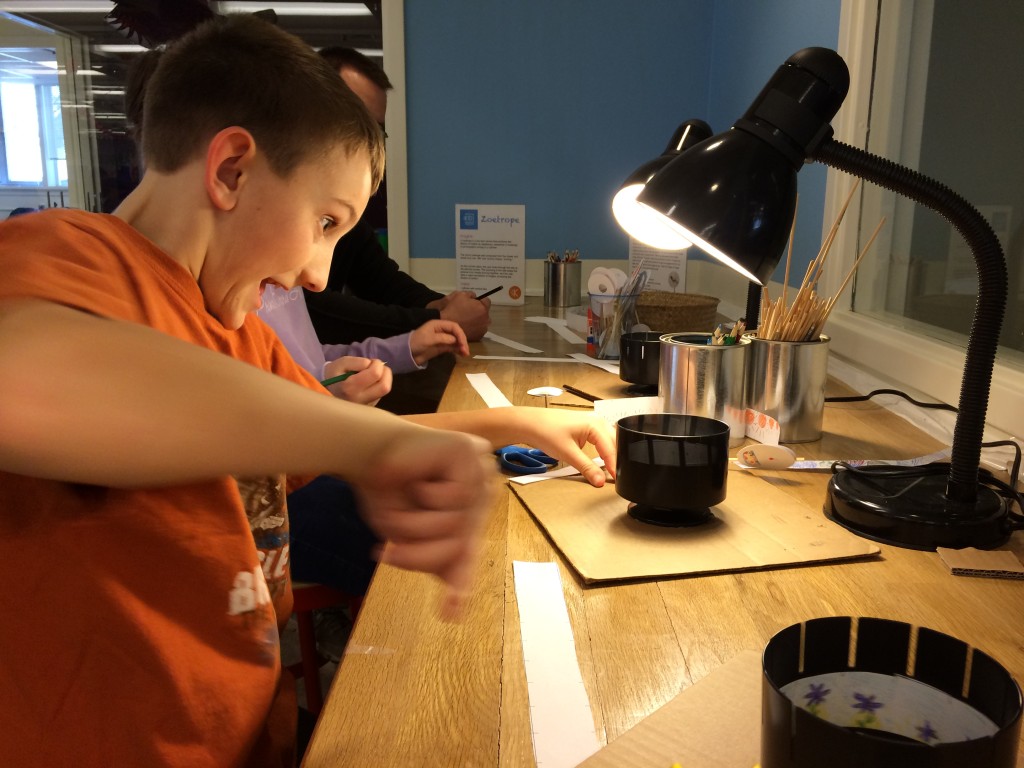 Next, they went to a table covered in brown paper where you could build an ArtBot. We have seen these at Maker events. You attach a small motor and markers to a cup, and it “walks” across the paper, making cool designs. The kids experimented with shifting how they attached the engines and the markers to get different effects. 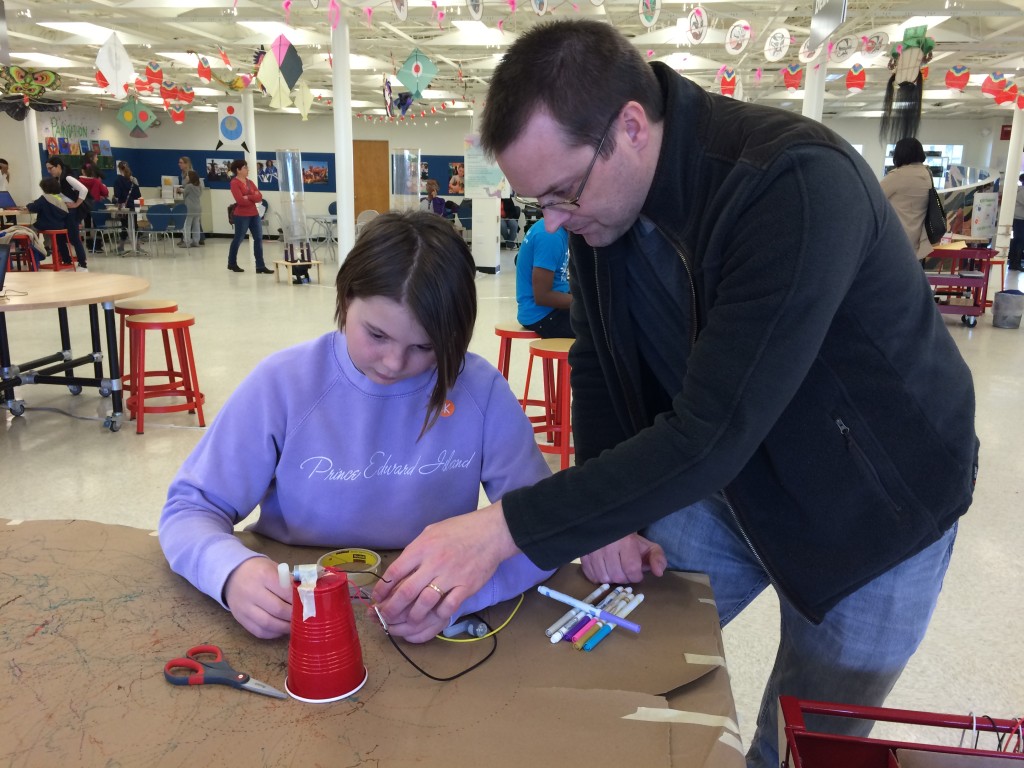 Then the kids played with a table filled with circuits, fans, batteries and switches. 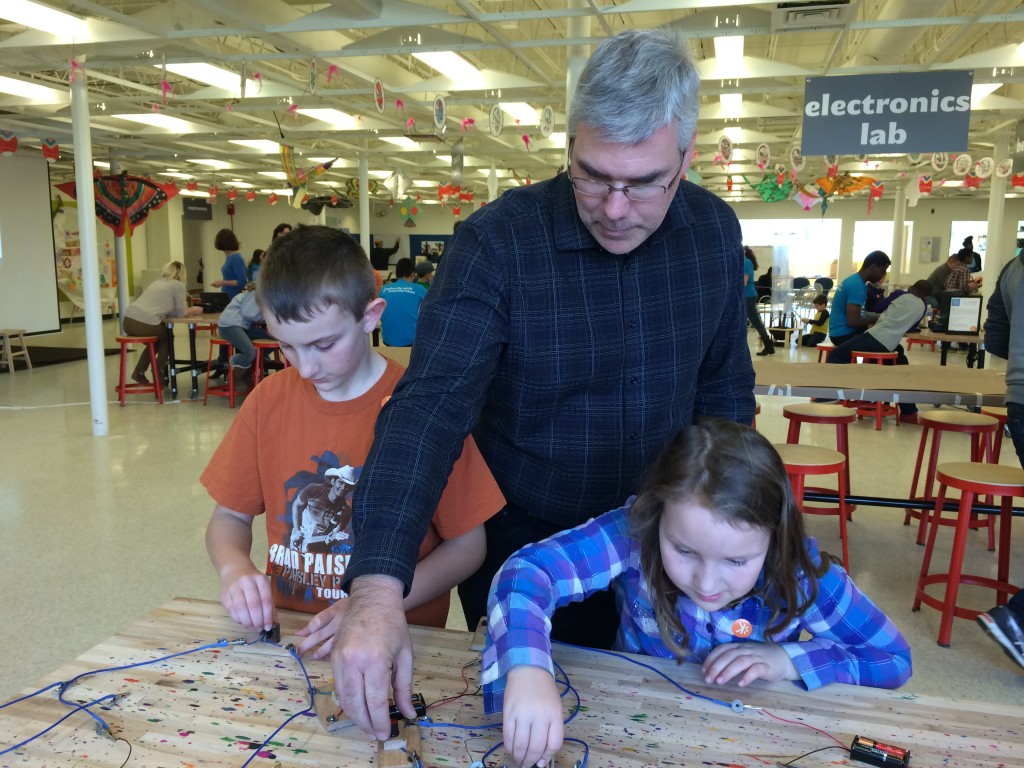 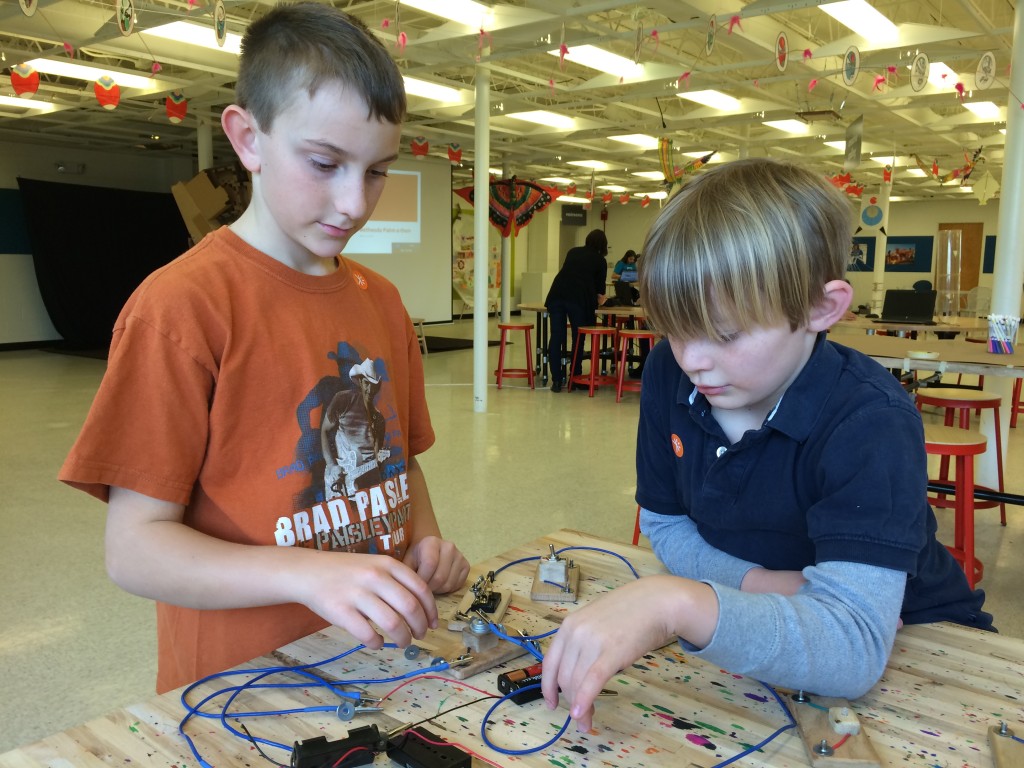 I admired a few items in the museum made from trash – a giant cardboard robot and a kite from Reese’s Pieces packaging. It sure would be awesome to have more Trashmagination-inspired items in here! 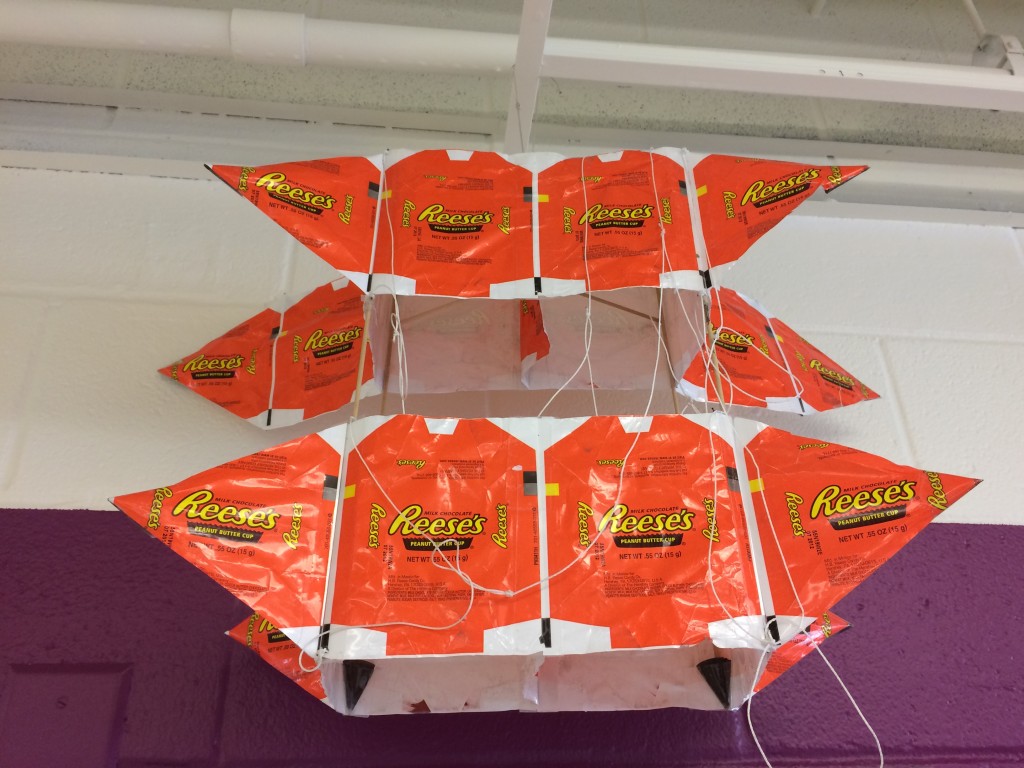 Russell played with the wind towers – this has always been one of his favorite activities at Maker Faires. 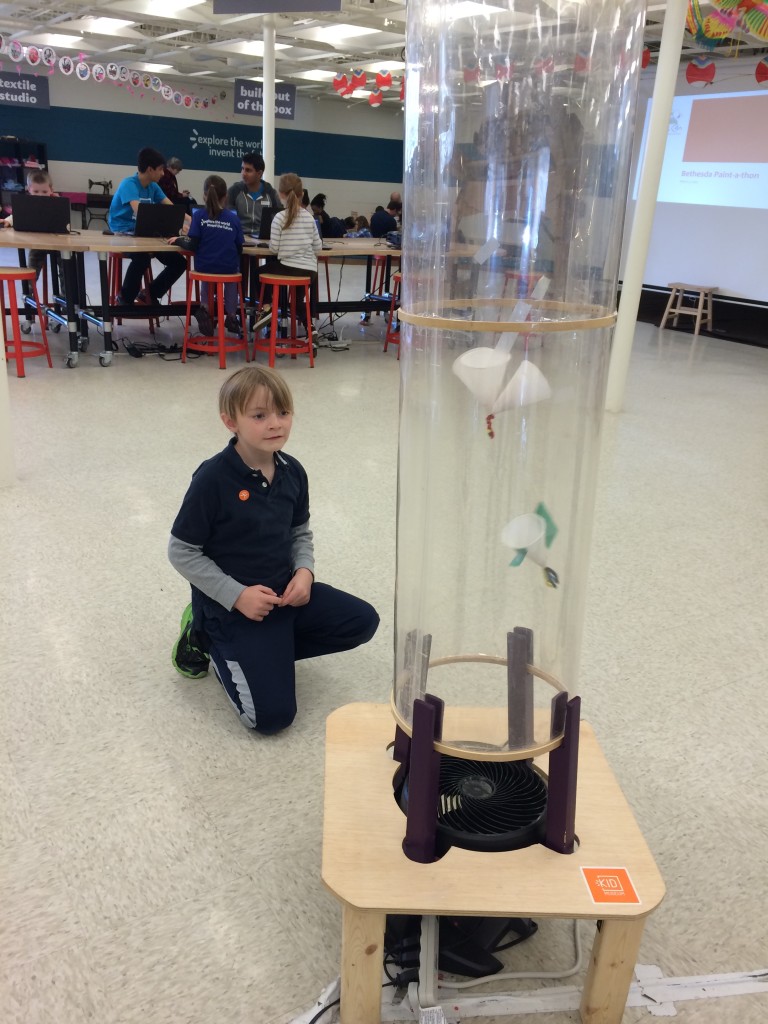 Finally the workshop started. With some encouragement from Mom, who threaded the needle and held the fabric while he sewed, Russell made this Minecraft creeper. Nora made a caterpillar (pictured at the top of the blog). 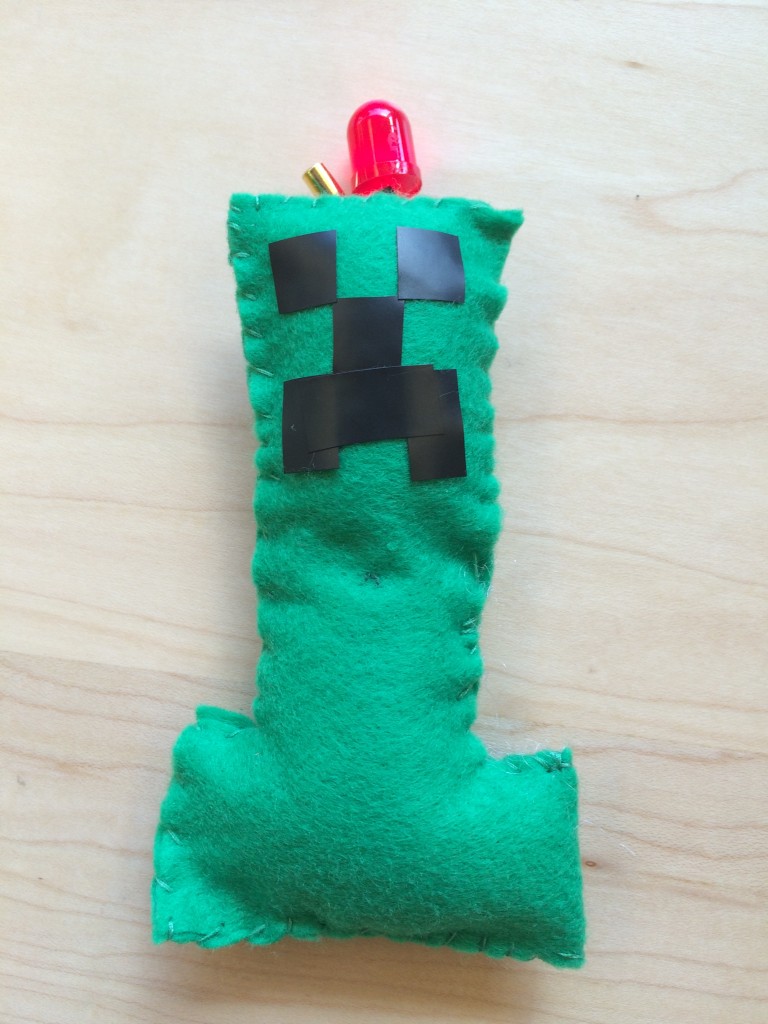 After fun at the museum, we went to Westfield Mall which is a few blocks away for snacks. We saw this dress on display, which made me think about the upcoming Trashion Fashion show! So excited! 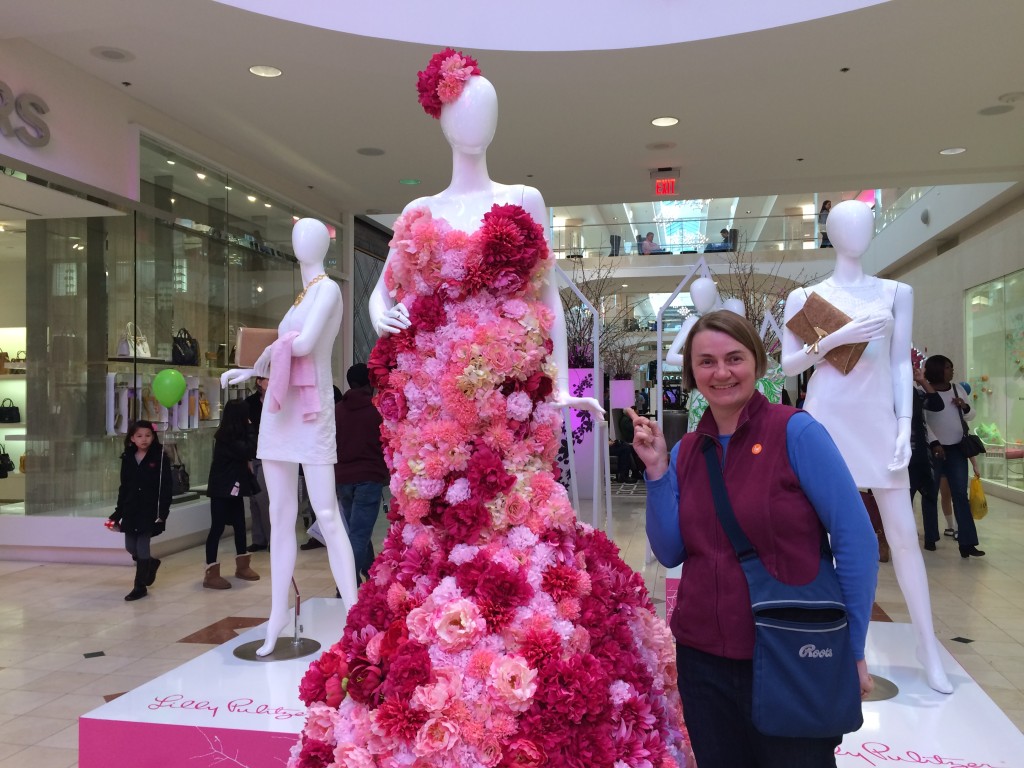 The kids are looking forward to their summer camps at the KID Museum this summer. Phew! It was a risk signing them up when we had not even visited the museum yet, but I think it will be fun. We’ll probably have lunch at Westfield Mall every day. 🙂