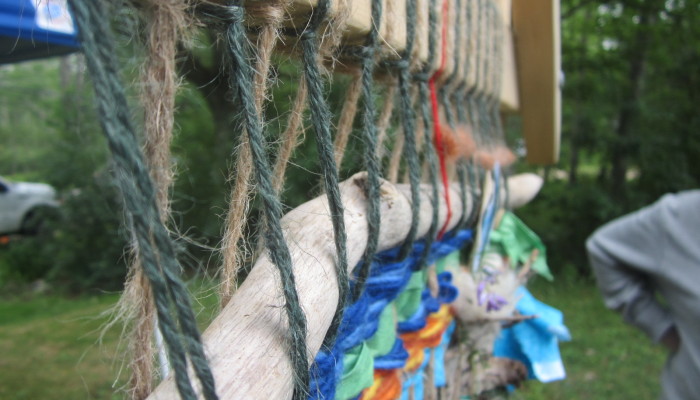 Last week at the Family Nature Summit in Bar Harbor, I organized two green lifestyles tours – and I’m going to write a blog about the places we visited. Let’s start with Susan Barrett Merrill and Weaving a Life who lives in Brooksville, Maine. We met Susan at the Hutton Gallery in Deer Isle where they were showing some of her amazing woven masks.

On the front lawn of the gallery, Susan had set up a large free-standing loom called a StoryLoom™. She encouraged the tour participants to think about someone who needed positive energy from the group. The group decided to weave for Natalie Springuel and Rich MacDonald, two local naturalists who were teaching at the Summit. That week, their store called the Natural History Center had been flooded when patrons in the restaurant upstairs broke a sprinkler system. Even though they were up in the middle of the night with the flood, dealing with insurance and clearing out their store, they continued to share their teaching gifts at the Summit. Everyone agreed they would be a delightful team to honor with our weaving.

Susan had put out in baskets materials – some that you would expect to weave and some that were surprising. The most surprising to me was seaweed. I thought it would smell or disintegrate. But Susan said it dries quite nicely and would not smell. So that was the first thing we wove. 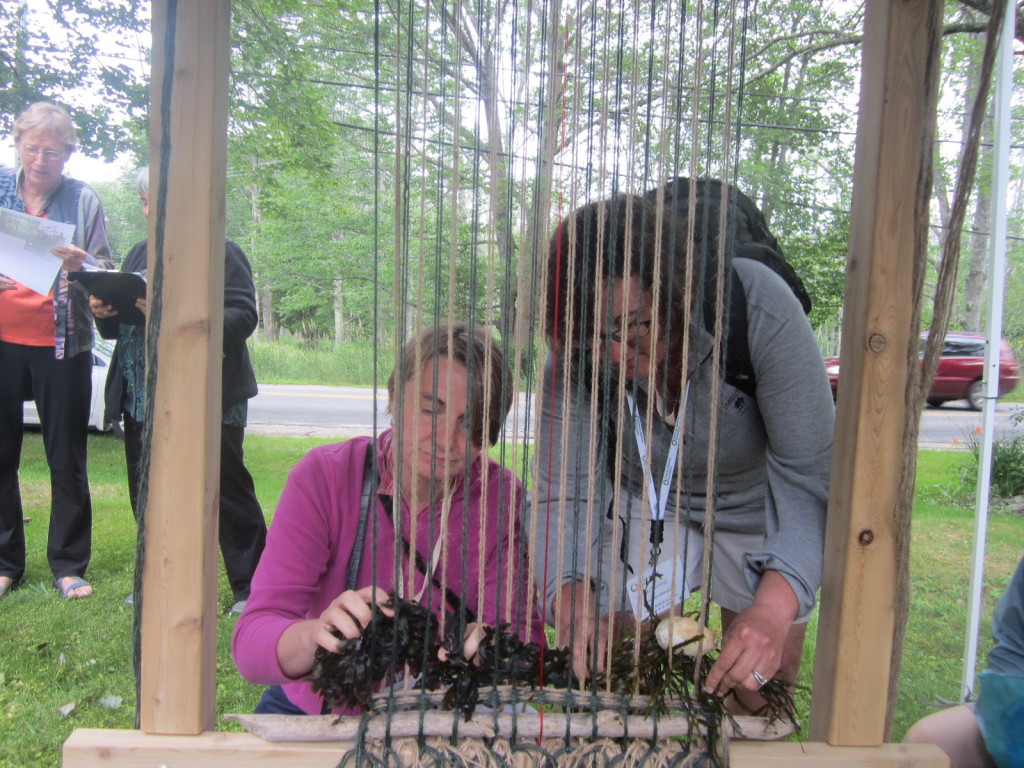 Weaving seaweed into our Weaving a Life creation

Susan noted that often people weave in a pattern that reminds you of a landscape. So for example, we started with items from the sea, then moved to the shoreline, then to “homes” or objects from people, then to mountains and finally the sky.

One participant named Ted wove in a yellow Summit scarf, which is the color for people who are new to the Summit.

Ted weaves on the Weaving a Life loom

We wrote notes on birch bark to Natalie and Rich, and wove those into our creation. 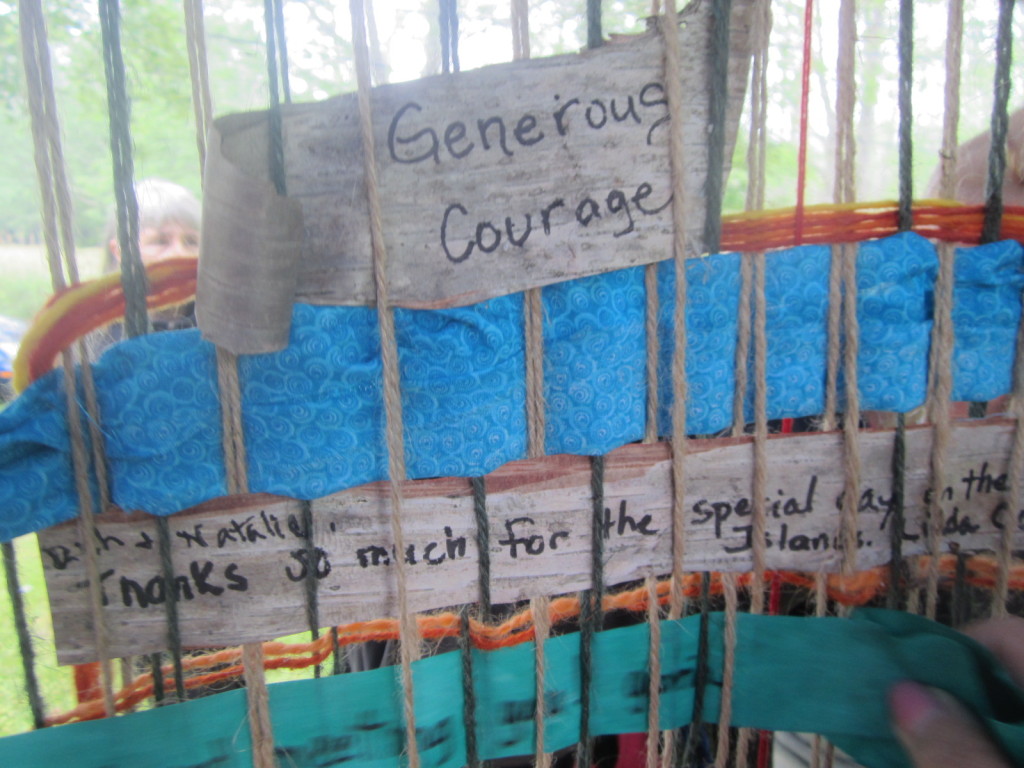 Notes on birch bark in the Weaving a Life creation

I lay down on the ground and took a photo facing upwards – here you can see my mother laughing as she weaves as well as some moss and a baby tree that went into the weaving. 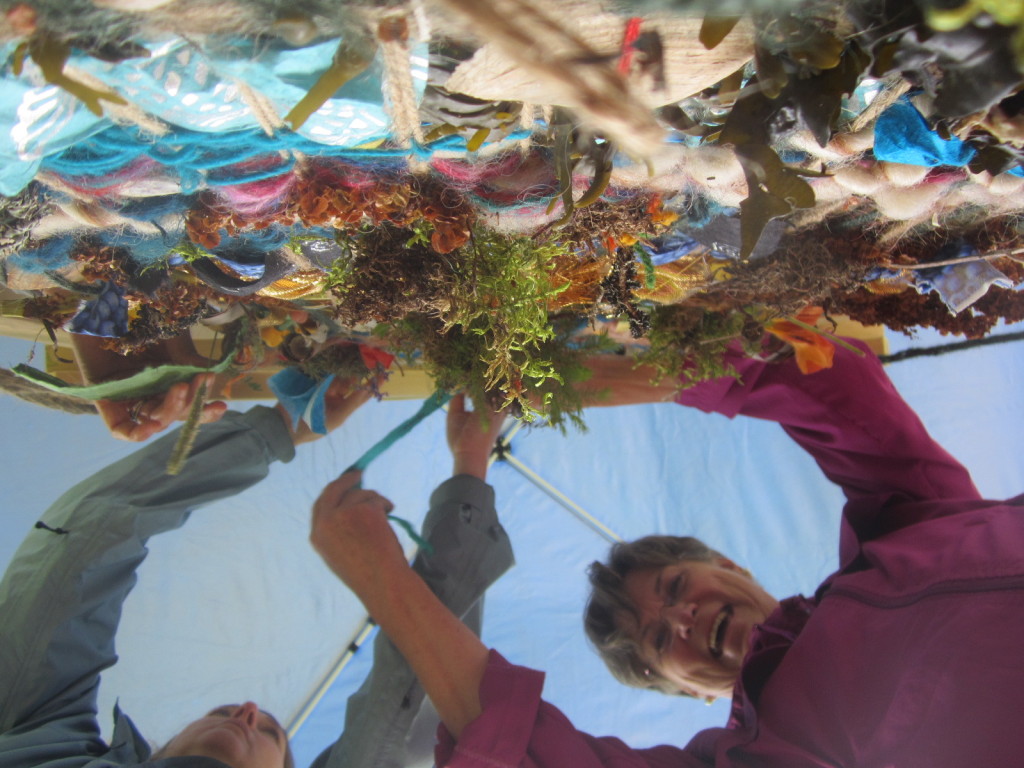 Mom laughing as she weaves

I would say the group was a bit skeptical at first, but by the end, they were squeezing in to take turns weaving.

Summiteers adding items to the Weaving a Life loom

Everyone was so pleased with what we put together. We were so surprised by the diversity of items we could add to the loom. We were excited to bring it back to Natalie and Rich where perhaps they could put it up in their store once it was back in business. Everyone wanted a photo with the creation. 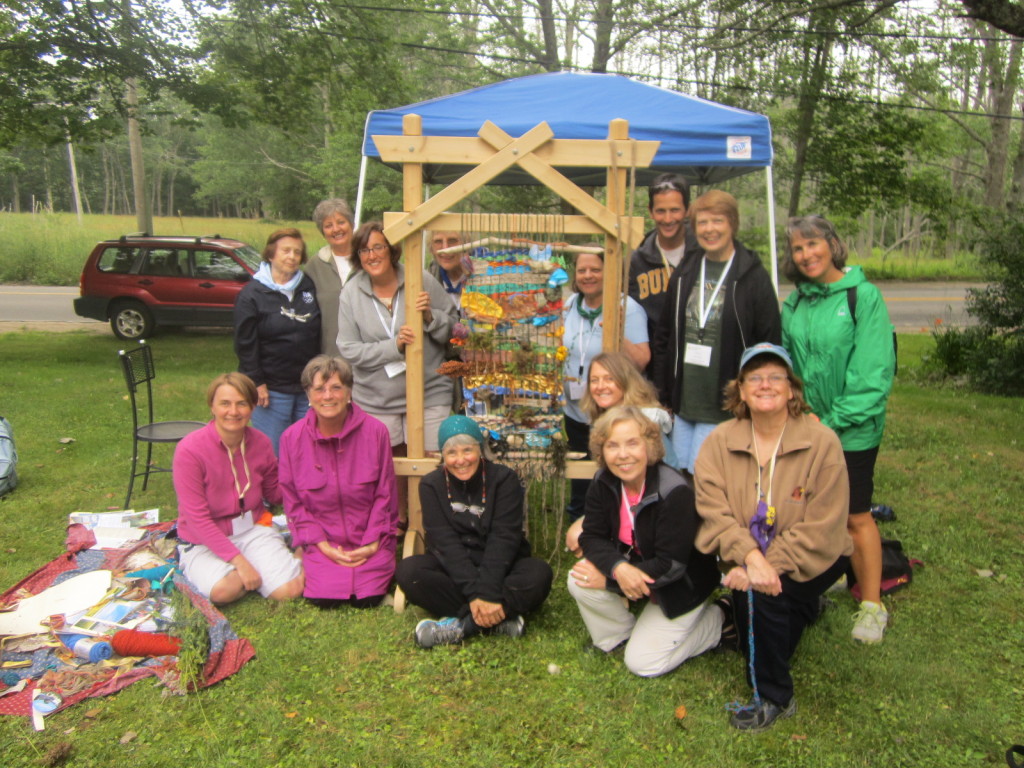 Spreading the Word about Weaving a Life

We didn’t get near enough time with Susan because there was so much awesomeness in this part of Maine, so I know many Summiteers did not get to buy her book or talk with her about her masks. I promised the Summiteers I would put a link to her website on the Family Nature Summits Facebook page so they could easily find her. I bought her book and it is filled with all the instructions on how to do more of this community weaving and even how to make her masks (the base of them).

Thank you Susan for being so generous with your talents!

Rich and Natalie said they were very surprised and touched by our gift. It was definitely one of the highlights of the Summit for me! I look forward to telling everyone about Weaving a Life.