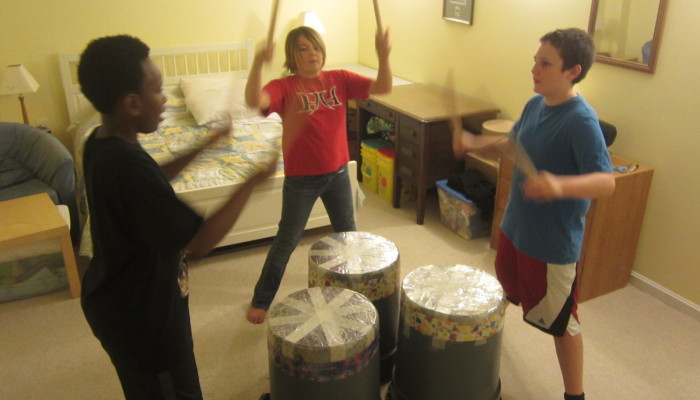 Every year at my kids’ school, there is a talent show. Every year, my daughter Nora says she wants to do something in the show, but so far has never entered an act. I told her that this year was her last chance, since she is in grade six and will go to middle school next year. I offered to teach her and some friends how to do a basic taiko song.

I taught Nora to see if she liked it, and she loved it. Next we invited her friend Blake who plays percussion in the school band, so we figured he would like it. And then their friend Corey joined in.

They have been practicing in the basement. I made each of them a drum and drum sticks. Since taiko drums cost thousands of dollars, we made taiko drums from garbage cans for about $30 each.

Making a Taiko from a Garbage Can

I bought a 20 gallon garbage container with as flat a bottom as possible (no wheels). Then I used a box cutter knife to cut around the edge. It is surprisingly easy to cut through even though the plastic looks thick. 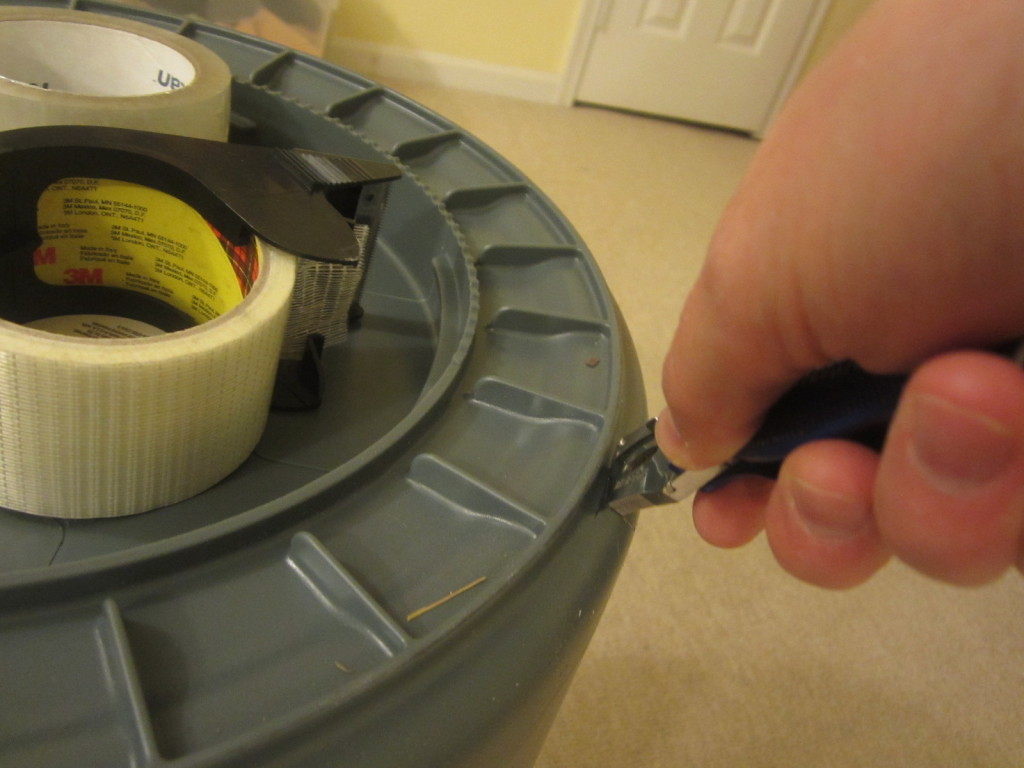 Next I made an X using the type of packing tape that is reinforced with thread. It’s called “strapping tape” and says “extreme” on the package. Then I put another X so it’s like a star. 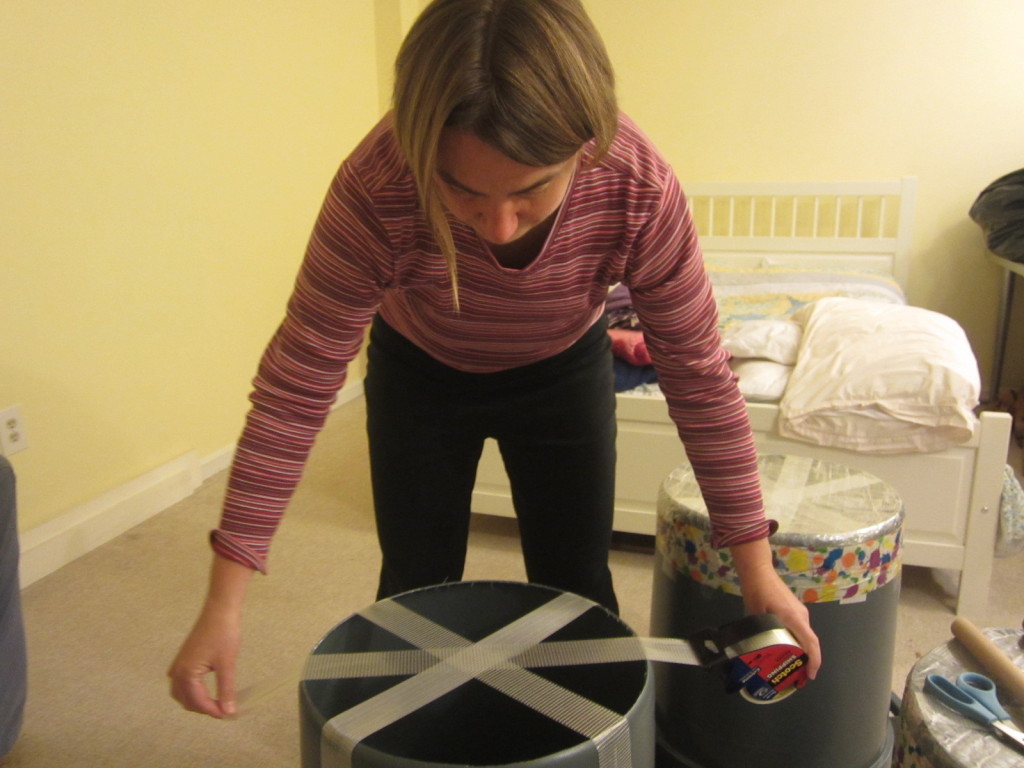 Next I lay down clear packing tape horizontally and vertically – many layers. I think I’m up to six layers now. I have since added another layer of strapping tape and many more layers of packing tape because we actually broke through the drum head at one point with all our practices! 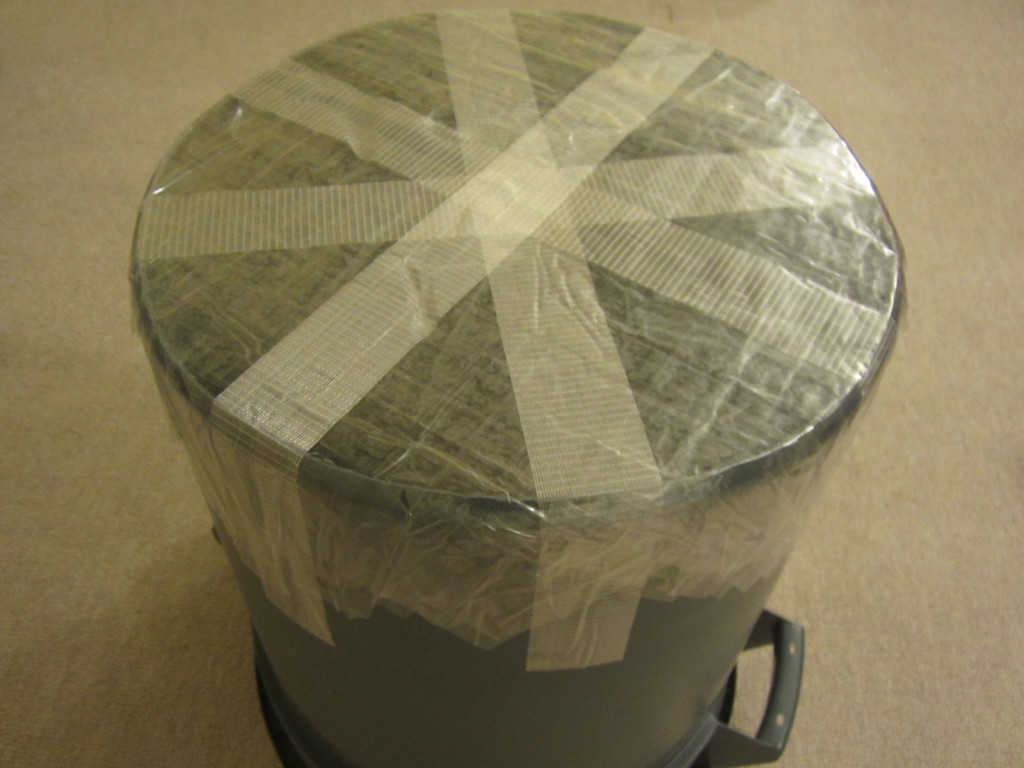 Packing tape forms the head of the garbage can taiko drum

Last, I took duct tape and went around the drum head to keep the ends all aligned.

Adding the duct tape to the garbage can taiko drum

I had purchased some super perfect bachi from my taiko instructor, Mark H. Rooney, but I wanted to learn how to make my own. I bought a dowel that was about three feet long and one inch diameter. Bob helped me cut it to the right lengths with a miter saw, and he held up our belt sander outside so we could take off the sharp edges at either end. Then I used a mouse sander with finer sandpaper to make the whole stick very smooth. The bachi I purchased from Mark were beech, and weighed 5.5 ounces. These oak ones weigh 5.9 ounces, so very similar. They are not as perfect as his, but they are also not being used on super nice drums. 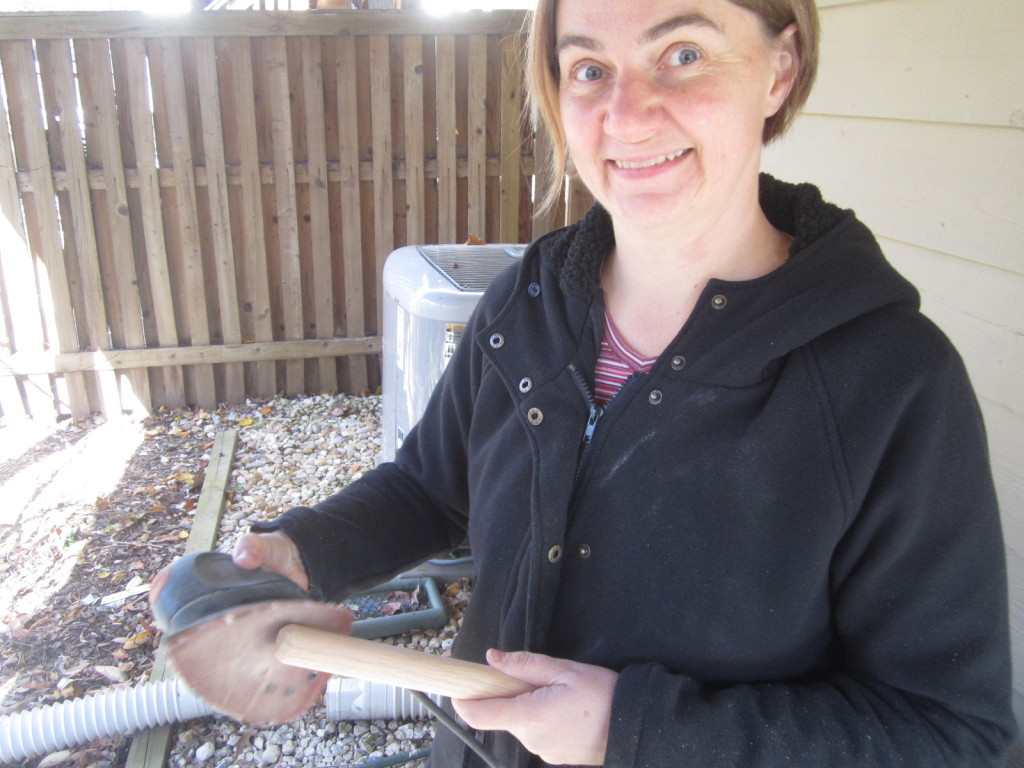 Sanding the edges of the taiko drumsticks or bachi

We practice in our guest room in the basement because it’s a big room and we can close the door, thus reducing the noise throughout the house. My husband says it has not been annoying at all, which is surprising but when I am upstairs and Nora is practicing down there, I agree, the noise is subtle.

Our guest room was very full. It had two large beds and lots of junk. I decided to take one of the beds out and put it in my son’s room, and then store his bed in our loft. I then removed a bunch of junk. As a result, we have a nice practice space, with a mirror on the closet door so the kids can watch as they practice.

The kids are very foolish. That is certain. But they are also very enthusiastic. I have to be serious with them, or they giggle all the time. I follow the routine that I learned in my taiko class, where we start with a moment of quiet when they focus on the task and push aside everything before. It helps a lot. I taught them the five levels of respect – respect for the teacher, space, self, others and taiko / bachi. We do “oroshi” which means basic skills practice. I tap together two metal tools so they can hear the ji or rhythm when they practice. We do a lot of “kuchi showa” which means reciting the rhythms using words that you speak out loud. We play games to practice moving from line A to line B. We do call and respond games. 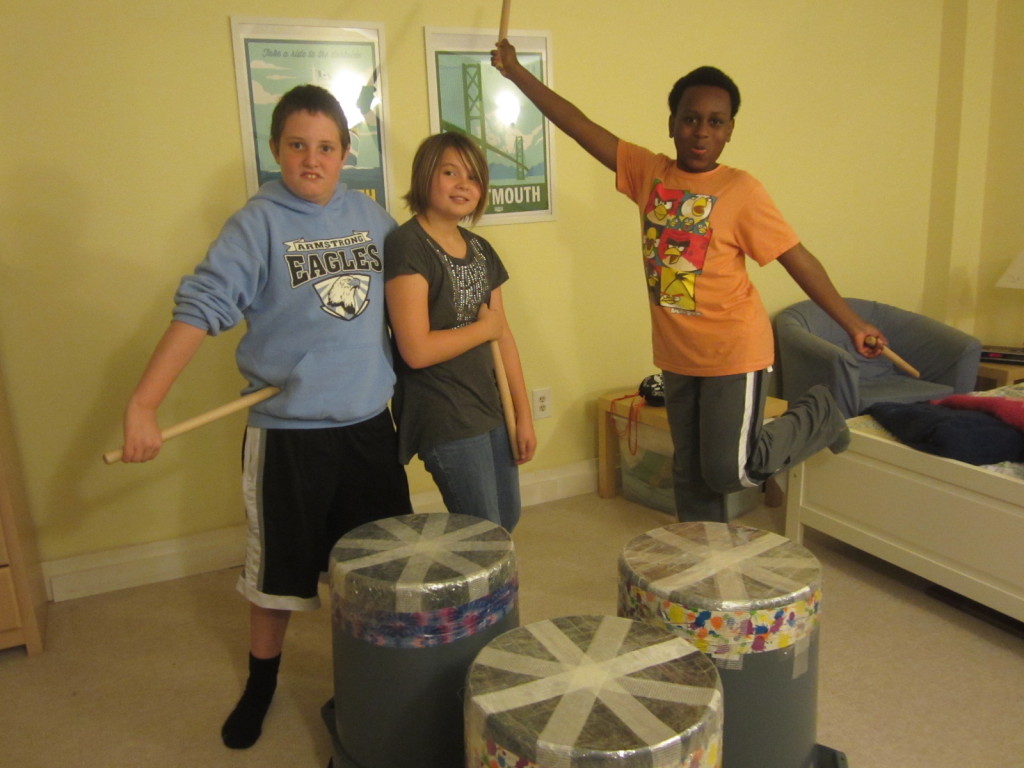 I took a video of their practice, and walked through the song with each person, asking them to point out where they needed to work on their form. They each are good at different aspects of it. Overall, Nora has practiced the most (she’s down there practicing multiple times a day), so she is the leader. She calls out the “ich, ni, sore” (which means one-two-get ready) to kick off the performance. She plays the rhythms first so the boys have something to follow, she raises her sticks the highest and get the rhythms most perfectly. She just needs to bend her knees more & sit lower in her stance – the same problem I have when playing taiko!

I liked Blake and Corey before we took this on, and I still think they are great. The three of them are a nice group and they treat each other with respect. The boys giggle a lot, and if I’m not there, they can’t practice effectively. But they are nice kids. Nora is very proud of this project, and she said the boys think “she has a cool mom.” So that’s sound pretty awesome to me. Their audition is Thursday – we’ll see if they get chosen for the show in February!