My kids have both had an incredible summer and a lot of the credit goes to their camp counselors.

Every year, I am completely floored by the counselors at Reston Association summer camps. I don’t know how they find such extraordinary people, but their energy level is incredible. When I drop Russell off at camp, they are shouting, “Dude! Russell! Great to see you!” and they talk to him like he is The Most Amazing Man in the World.

In this photo, you can see three of Russell’s counselors this summer – Neil, Andrew and Kat. There are many activities that every camper does like swimming and creeking, but they also sign up for one “special interest.” Russell was always signing up for Drama because Neil & Kat were the leaders and he LOVED it. I went to see their play at the end of camp and it was hilarious. Russell said they each designed their characters and then the counselors wrote the plot.

Russell was Mister Whiskers. Here’s a plot summary – there are good guy superheros and bad guys. The bad guys have pretty nifty superpowers and the good guys are pretty lame. For example, Russell is a cat and that’s it. The bad guys capture some good guys and the rest try to rescue, but they are easily defeated when they are working alone. They finally work as a team and win. They defeat the head bad guy because he is allergic to cats and so, Mister Whiskers is the hero. So you can see why Russell thought it was just awesome.

Russell continues to tell me stories about little special moments at camp. Many involve a counselor named Chris who has been working at the camps ever since Nora & Russell started in the “Hug-a-Tree” or pre-school camp. Chris has this incredible charisma & way of connecting with everyone. I see him work the crowd and how he makes everyone smile and feel like the most special kid ever. I don’t know what Chris does the rest of the year but I sure would love to work with him!

Nora has had a phenomenal summer with camps related to international cooking, caving, hockey and art. But the one that she LOVED the most was the Primitive Teachings Camp through Parktakes at Riverbend Park.

This camp is taught by Michael Sottosanti, an expert in primitive technologies. They built shelters, made tools from stones and deerskin, blew blow darts and did archery, caught frogs and minnows, explored an old house that has been swallowed up by the forest and made lots of campfires. One reason Nora loved this camp was because it did not have a set schedule, which is truly NOT the way most summer camps work. Instead, Michael would teach the same skills over and over, whenever someone was interested, and the kids were left to wander and try things out as they wanted. 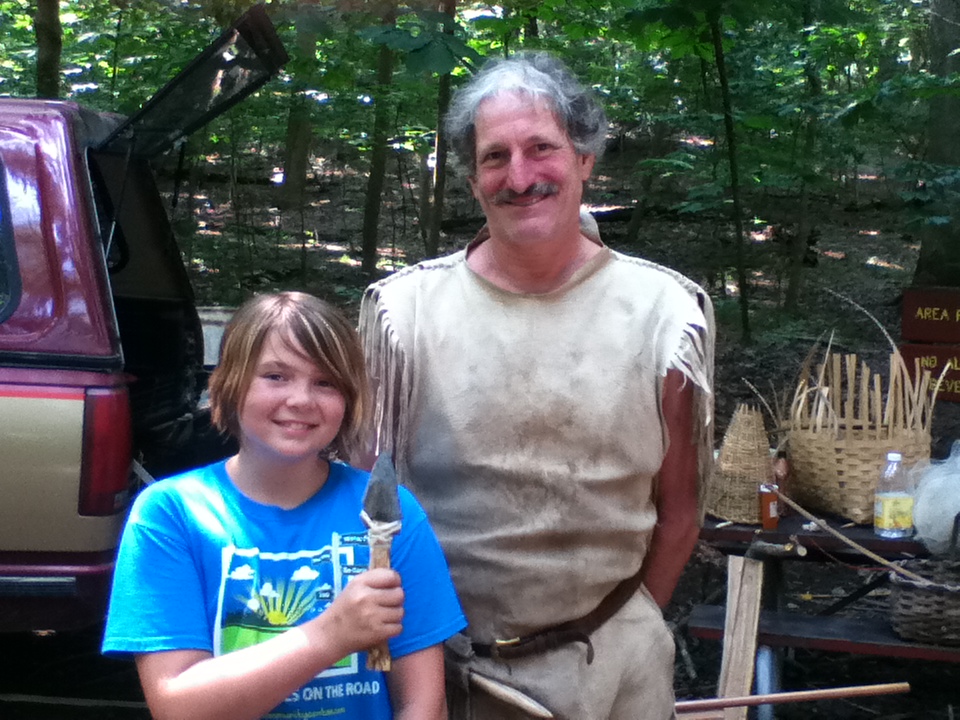 I was intrigued by his approach and his background so I asked him a few questions when dropping of Nora. He gave me his card, which said his company Mountain View LTD involves primitive skills workshops and custom home building / repair. He lives most of the year in Florida, but comes to Virginia every summer to teach this camp for a few months. He has been doing this for years. He also gave me his son’s college entrance essay, which as he said, summarizes the whole thing. It told about growing up with a dad who lives like a native American person – so much that people think he is actually native American.

It was fascinating to watch him make a blow dart by using string and the inside of a thistle flower. He said he burned off the thorns of the flower with a match and then tied the flower shut so it would not pop. When it is time to make the blow dart, he wraps the puff around the stick and then “poof” – it opens like a fluffy flower. Then everyone took turns blowing through the bamboo or metal pipe to make the blow dart fly through the air. This website from the Cherokee Heritage Center in Oklahoma describes blow guns & arrow making in more detail. This website called Sensible Survival shows step-by-step photos of preparing the thistle flowers. 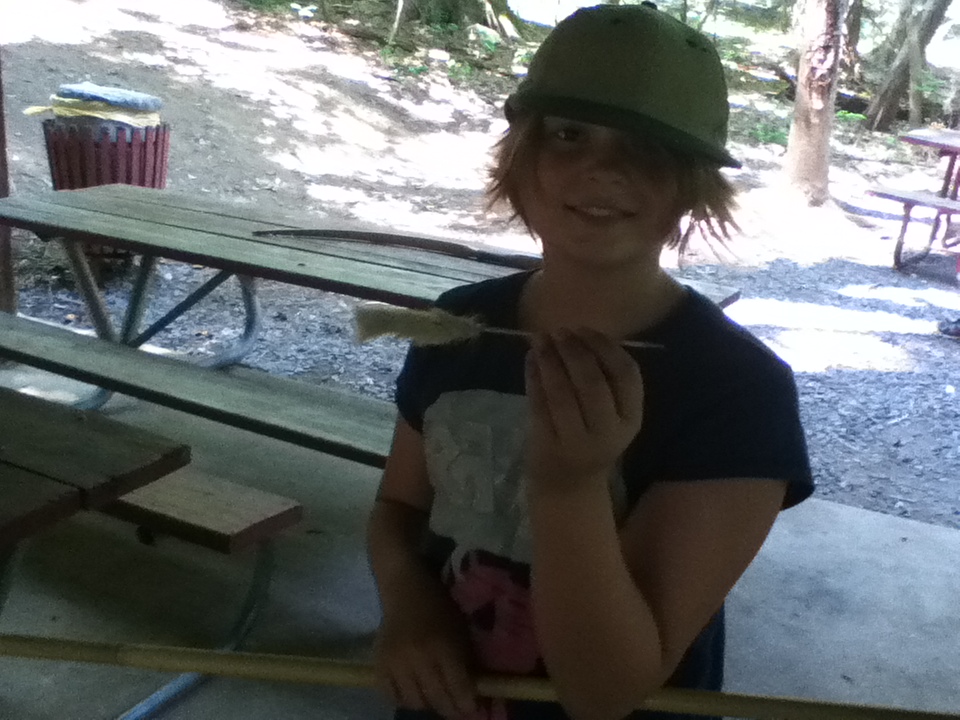 Whatever Michael was teaching, he had a peaceful smile. It was lovely to see him living his true life and sharing it with kids. I think kids can sense authentic living and in some cases, it makes them more peaceful too.

Finally, here’s a photo of a sculpture Nora made at the GRACE Art camp. I think she has a lot of character. 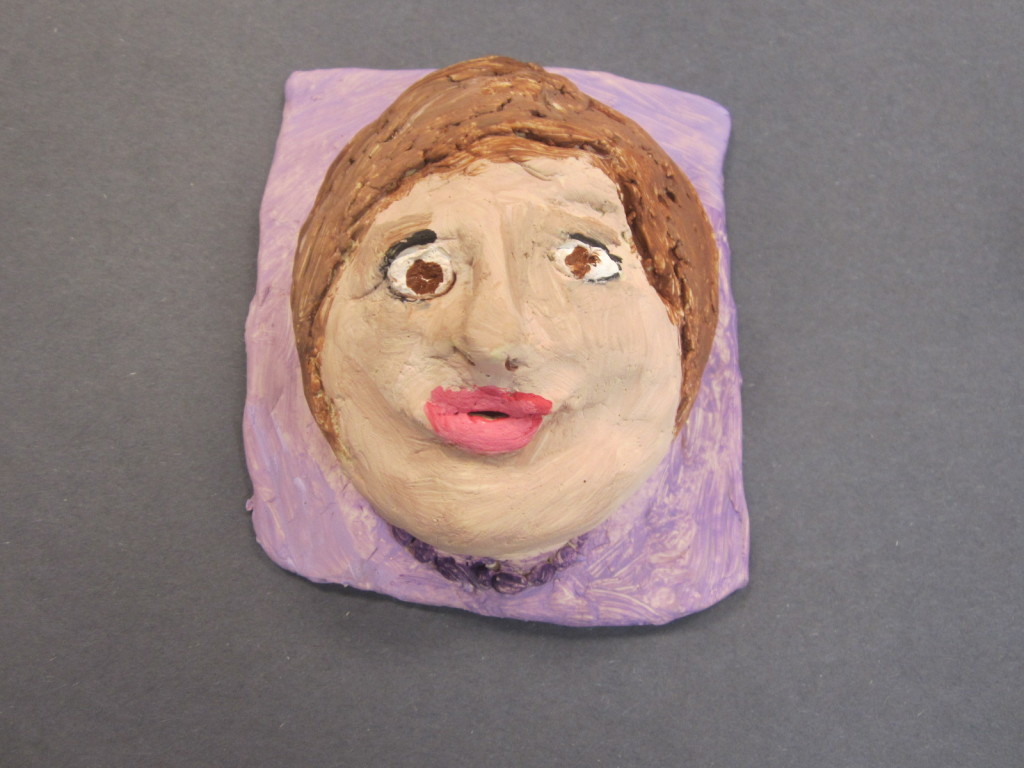 I’m so grateful that my kids met so many truly inspiring people this summer. The lessons they learn at these camps are all about giving your best and following your heart. We are such a lucky family!