Many of you have seen the amazing viral video about Landfill Harmonic which shows the impact of a community making musical instruments from trash.

Today, Maker Camp featured three artists who make musical instruments from recycled materials on a Google Hangout. I had SUCH a great time watching this Hangout and I encourage you to watch it if you want to change your views about making music. Here are the artists featured:

Krys played French horn, and this gave her a lot of ideas around making instruments from long tubes – whether they are glass tubes or long tubes of seaweed. 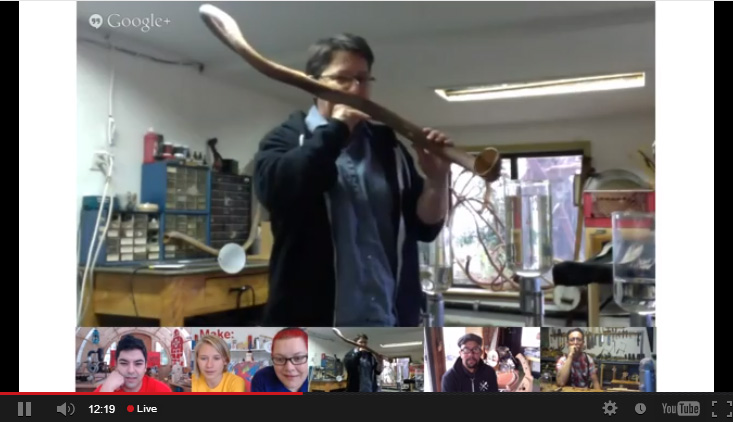 I spent a few years living in British Columbia, where I did lots of ocean kayaking. I remember those long seaweed that would float on the ocean’s surface – with a ball of gas in the top to keep it floating on the surface. Krys found these seaweed, dried them and made them into horns that she expertly plays.

She also demonstrated an instrument that she called the “Speaker Slider.” She take recordings of random things and plays them through a round hand-sized speaker. She then puts the speaker in a glass tube, and the act of dropping and rising the speaker changes the sound in the most beautiful ways.

“I make stuff out of things,” says Zeke. Zeke makes guitars for $20 from objects within a few blocks of his home. He noted that even if you buy a very expensive guitar, it’s tuned a certain way, and if you want to tune it another way, you cannot. He can tune his instrument however he wants.

He showed his “canjo” which is a banjo made from a can for $6. He takes these instruments that look like a mistake and pulls out actual music from them. 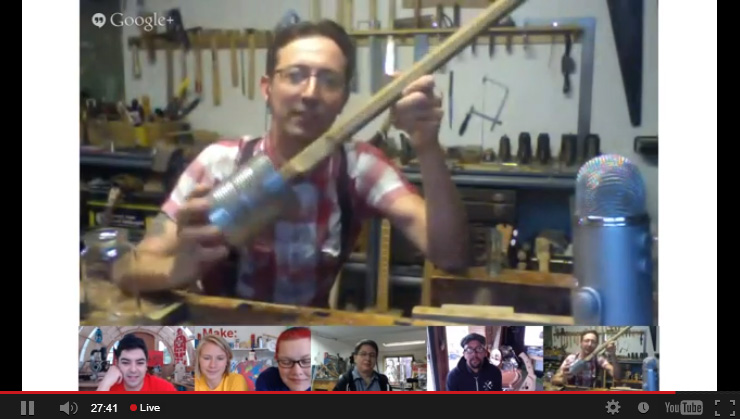 I like how he talks about “harvesting materials” from the trash, flea markets etc.

He is working in partnership with Dance Exchange – he made a bunch of instruments from an old piano. As he noted, a piano is 500 pounds of raw material when you are making recycled materials. The trees that are used in older pianos are extraordinary. The grain on piano wood is super straight and makes a great soundboard.

He is interested in discovering the voice of the items that have been discarded. Wonderful way to describe our work – giving voice to the discarded.

During the Hangout, he made a “diddley-bow” which is a simple instrument that involves stretching guitar strings across a space, and putting a glass bottle in there to act as the bracing. He then played it with such great gusto, it made me desperate to learn how to make one. He recommends watching videos of “One String Willie” to see some really inspired playing on a diddley-bow.

Here’s a great profile of Zeke playing a series of instruments mounted in a hallway that he completed as a residency:

Walter started by playing turn-tables, i.e. the thing that plays records. He would take records of an instrument or birds singing, and then play the turn table to get different effects. He started to hit it with chopsticks, or a tin can. He got tones out of the “tone bar” or the part of the turn table that amplifies the sound. 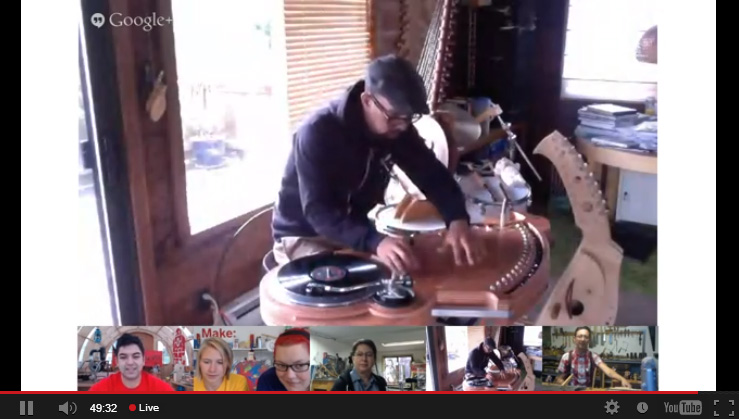 He then figured out how to attach the turn table to larger structures in harp shapes. He combines harps from other cultures. He also makes wind-powered turn tables. Then he made a device that sits in the waves in the ocean and gets power from that.