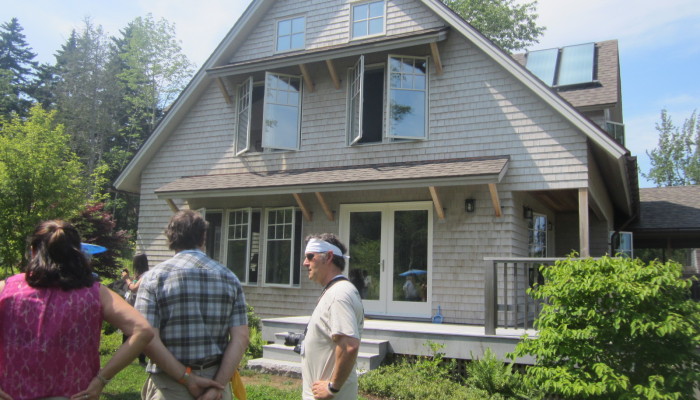 I love visiting people’s green homes. Green homeowners have typically done so much work, negotiating with designers and builders, learning about new products and all the while, retaining their aesthetic.

Last month in Maine, I had the honor of visiting two green homes in the Bar Harbor area – one owned by Robert and Stephanie Harris, and one by Sue Turner and Karl Karnaky. I brought 30 people with me from the Family Nature Summits, and everyone was just so thrilled to hear about the “green home journeys” of these folks.

Both of these homes are “net zero” – meaning that they produce as much energy with their solar panels as they use over the course of the year.

Robert teaches students at Princeton how to apply green design principles with industrial buildings, and Stephanie is an organic farmer and founding member of the Northeast Organic Farming Association of New Jersey. Stephanie spent her childhoods near Bar Harbor, so they decided to build their green dream home here. 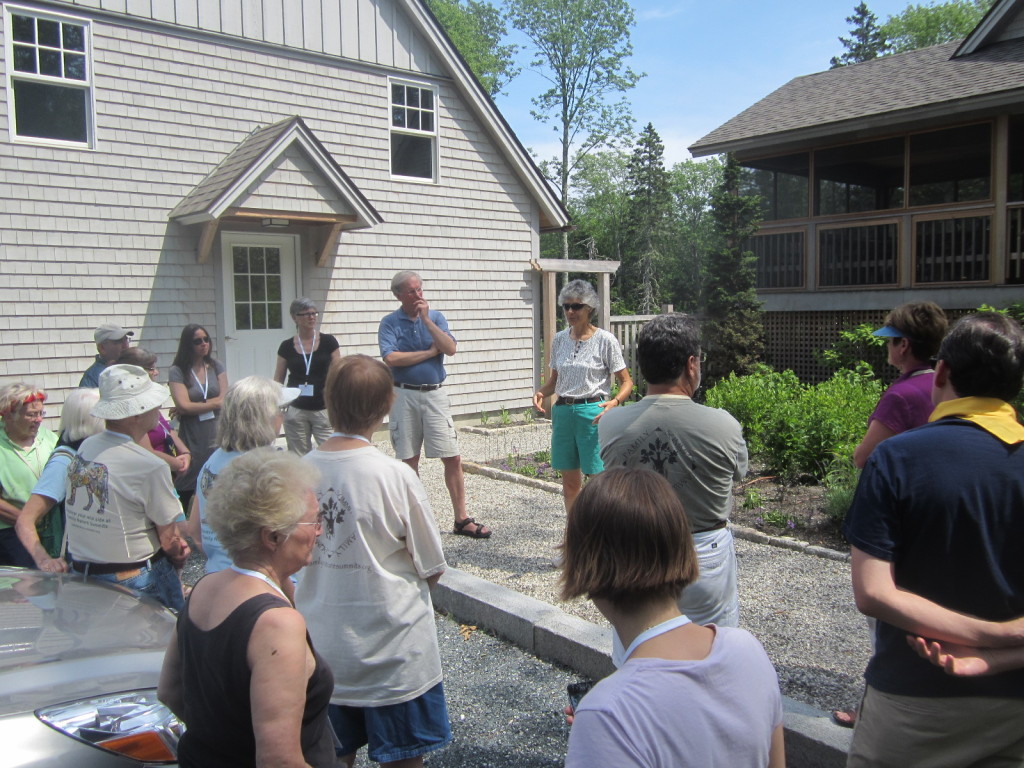 Robert and Stephanie Harris welcome us to their green home

While their two dogs loved on our tour members, Robert and Stephanie answered questions in their breezy screen porch.

In their design, they were looking for something like a farm house, but the goal of being “net zero.” They showed us their large roof covered with solar panels. They also incorporated passive solar elements such as overhangs or “eyebrows” on their windows to provide shade in summer and allow the sun inside in the winter. They have a complex air exchanging system because the home is built very “tightly” to reduce heat loss. 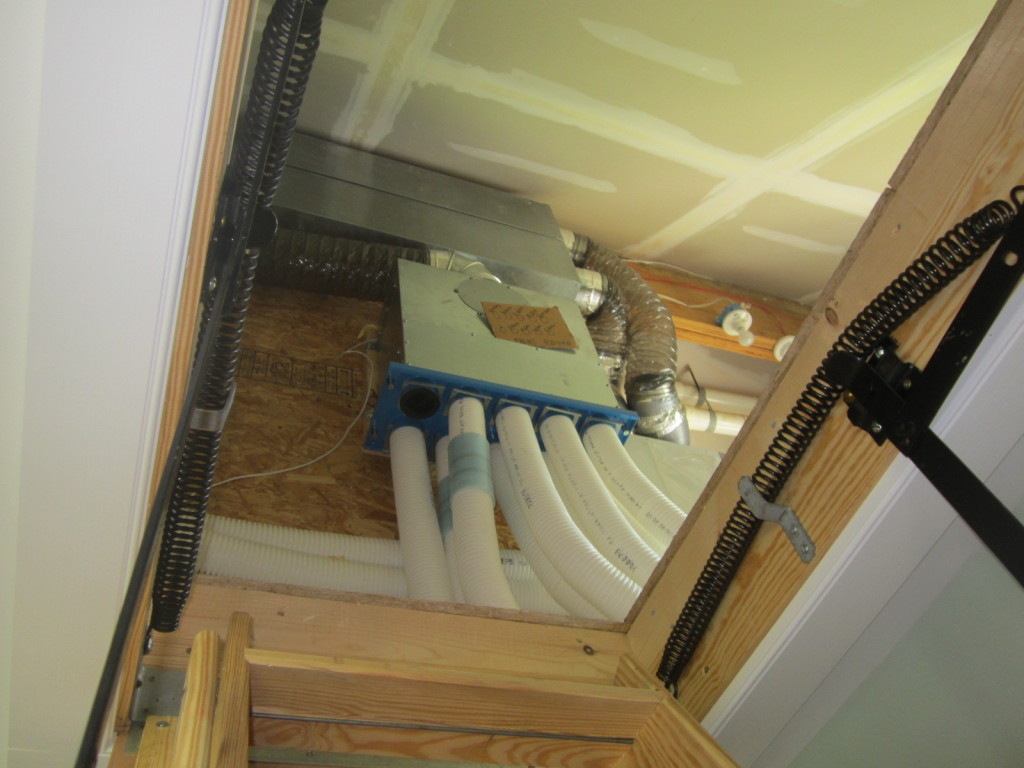 Air exchanger in the Harris’ attic

Their backyard just melts into the forest, designed with native plants and a stony swale for water drainage.

I just wanted to curl up on one of those quilted beds with the high ceilings.

We saw bushy plants in their organic garden that produces enough to feed them for months. Stephanie is used to running an organic farm, so I suppose this garden is easy in comparison. 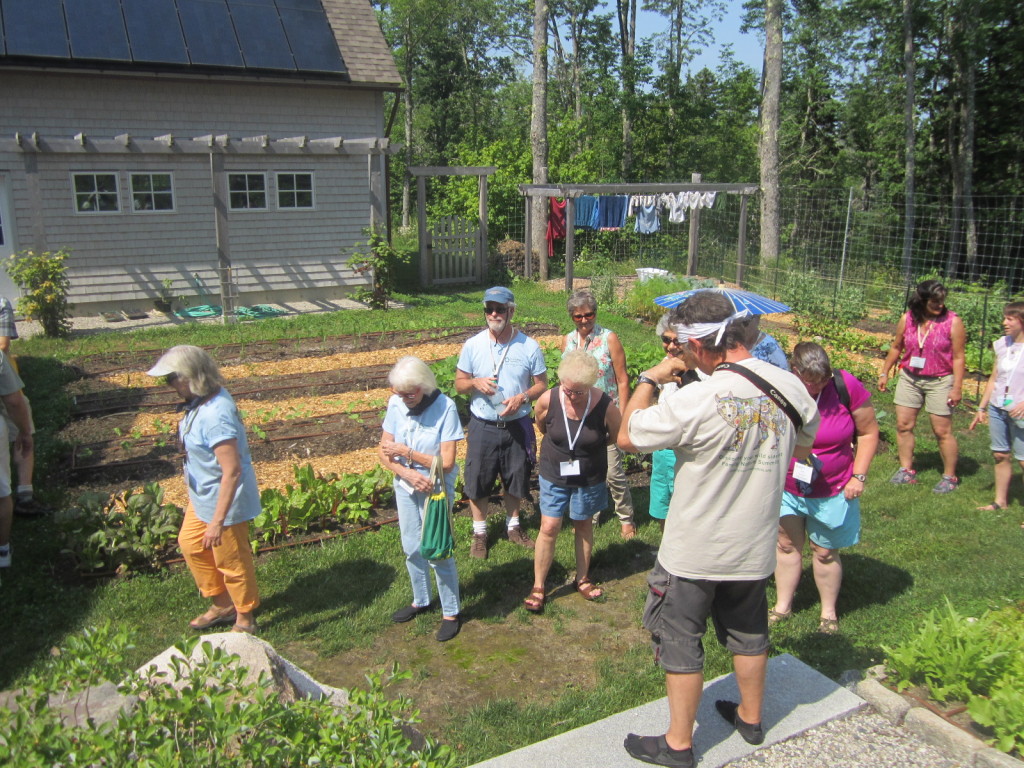 Thank you to the architects at Knight Associates for referring me to Robert and Stephanie for my tour!

I have visited many green homes, but never have I seen one made from rammed earth. The basic principle of rammed earth is that you build the home from the materials on-site, which reduces a lot of pollution from mining or deforesting and then transporting the materials to the site. Another basic principle is that the thick earthen walls cool the home naturally in the summer. 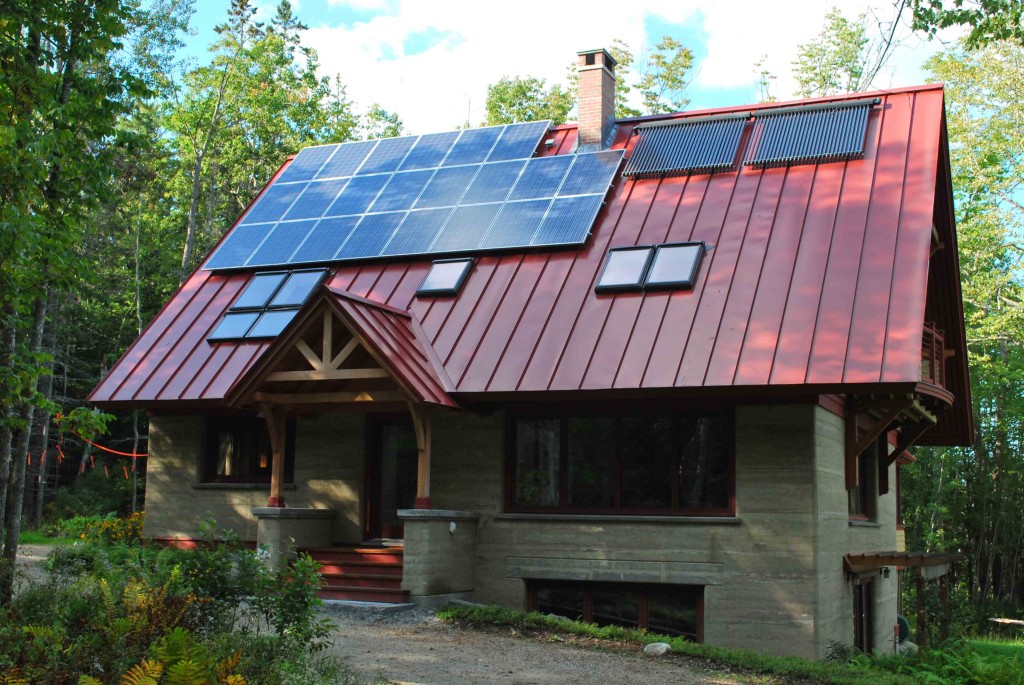 Rammed earth homes are more common in the southwest, but Sue had read about them in the Smithsonian magazine many years ago, and the design just stuck in her mind. Of course, there were no local developers who had ever built a rammed earth house, but Sue was lucky to find an architecture graduate student from MIT named Joe Dahmen who was studying them and was keen to give it a try in the Northeast. Her designer was Barbara Sassaman and her builder was Bill Shaw. Often the hardest aspect of these projects is finding the right team of people who are willing to take risks and learned. Sue and Karl could not say enough about their team.

How Do You Make a Rammed Earth Home?

First they tested the soil on site to make sure it had the right mix of sand, clay and gravel. They added some cement, I believe Susan said it was seven percent. They built wooden structures in the shape of thick walls. They mixed the materials on site and poured it in the wooden structures. Then by hand, they pounded the material down – rammed it into shape. 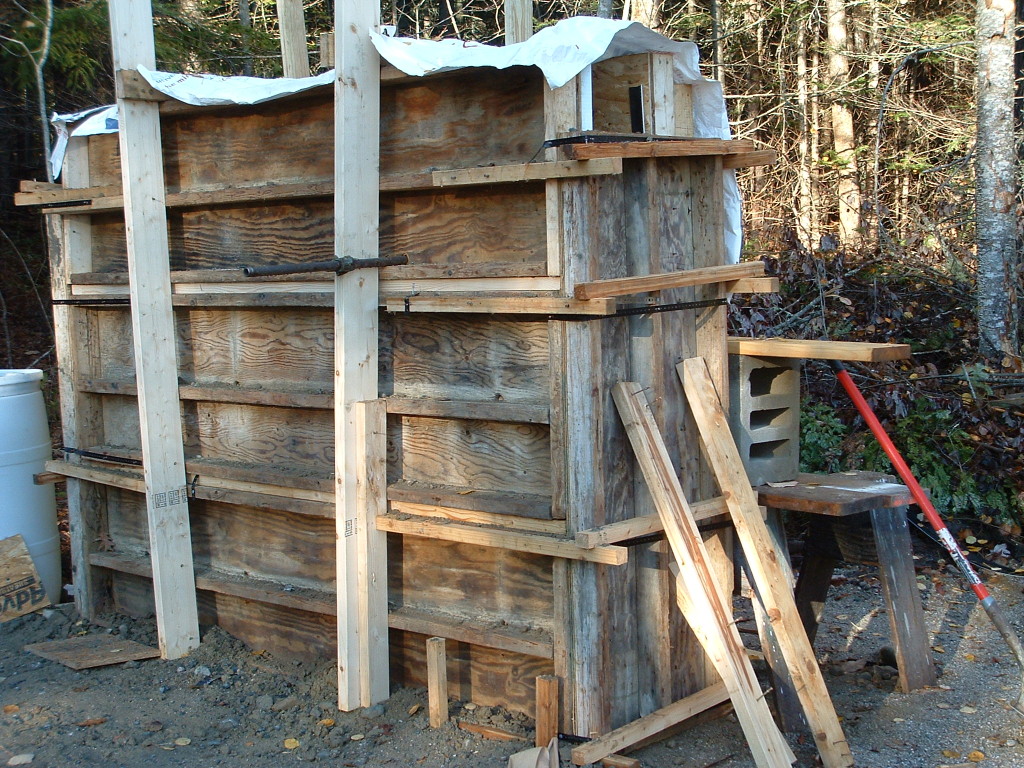 Wooden structures where they rammed the earth – Photo by Susan Turner

In this photo, you can see that the ramming devices are held by hand. This device is called a “pneumatic tamper.” It reminds me of a sledgehammer except it is pressing the walls into shape, not destroying things. You can imagine the amount of work that went into building the home since this device is held by individuals. Susan said it was exhausting. 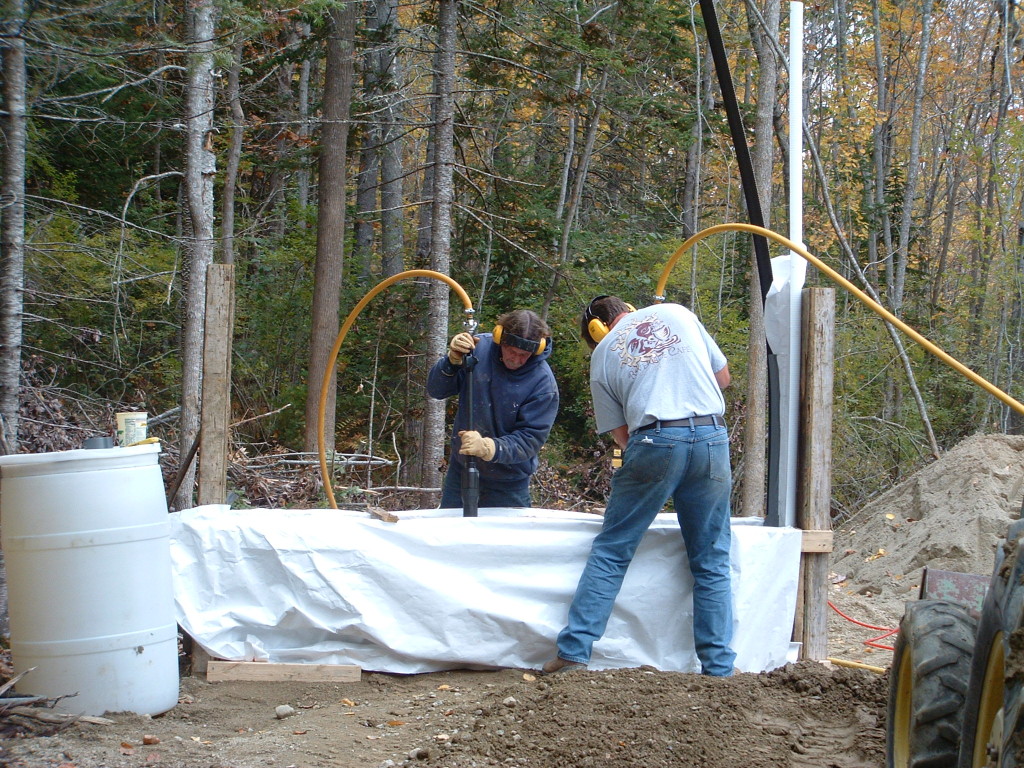 They ram the walls in layers, so the resulting walls have this wonderful texture. First there is a texture from the wooden structures, and then there is a texture because the wall is built in sections. Inside those thick walls is polystyrene insulation to keep the heat in. 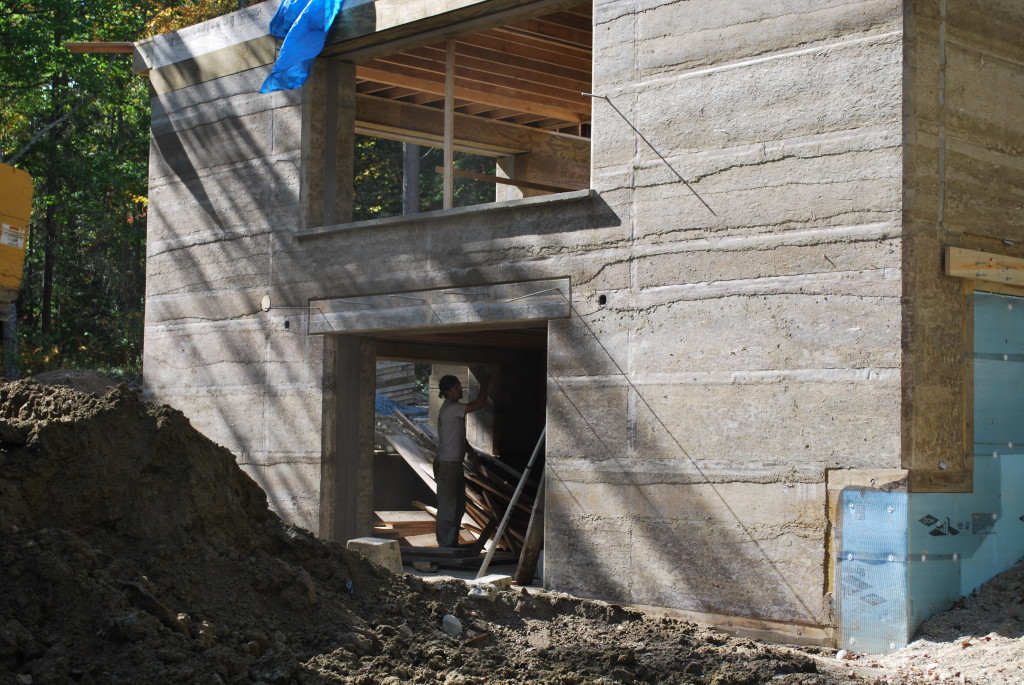 Wonderful texture on the walls – Photo by Susan Turner

The home is heated with radiant floor heating. Typically pipes for this heat are put in a concrete floor, because it could warp other types of flooring. But Susan found wood from a house built in 1836, so the wood was completely dried out. The huge wooden floor planks are not only beautiful, they can also handle the heat from radiant floor heating without warping. 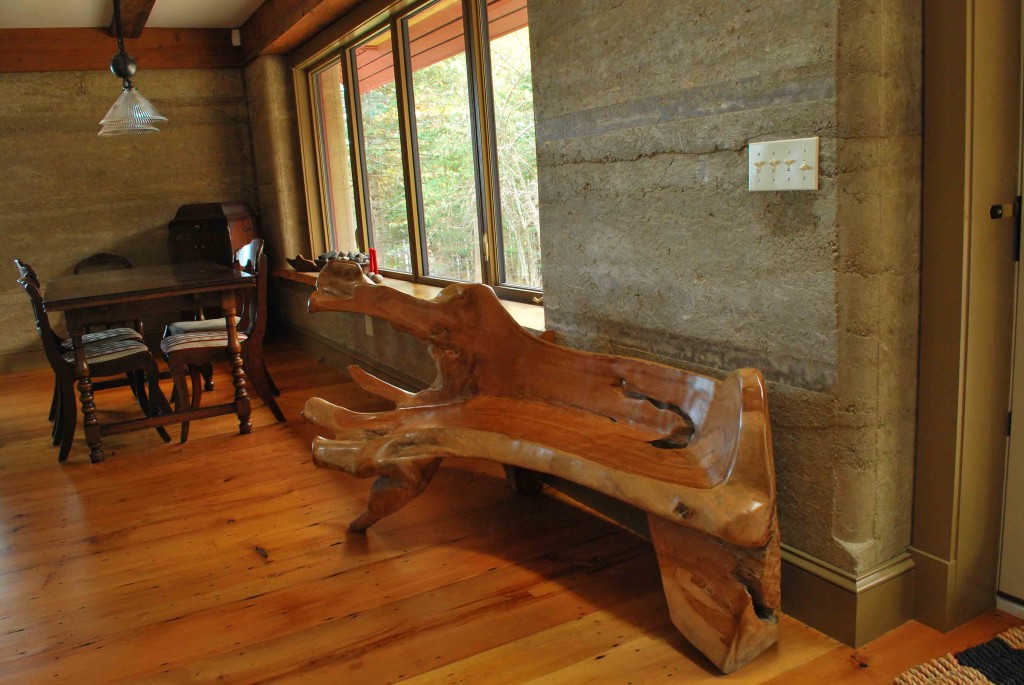 Their home also features my favorite green building appliance – a composting toilet! In this photo, I am in the basement where the composting portion of the toilet is located. The actual seat is located one story up on the main floor. 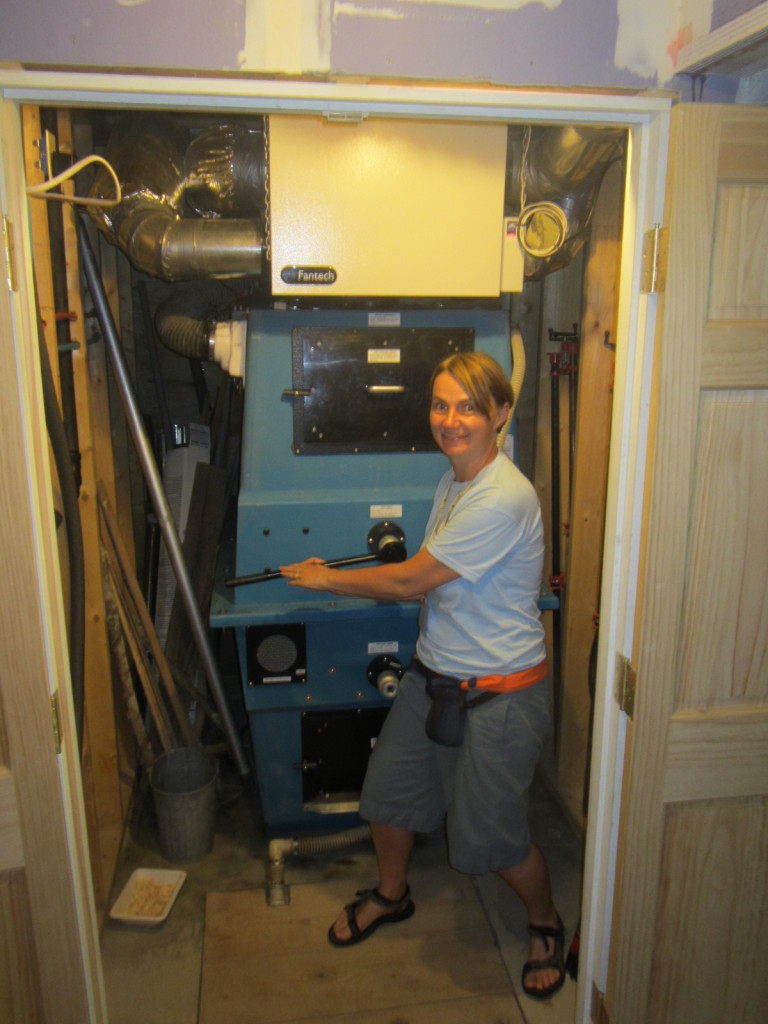 Composting Toilet at Susan and Karl’s home – I LOVE composting toilets! This is just the part that lives below the toilet.

There were many exquisite details inside the home, many which were salvaged from the cottage that used to be here when they purchased the land. For example the kitchen sink and a diamond-shaped stone in the fireplace came from the cottage. The railing on the stairwell was a new and incredibly beautiful addition. 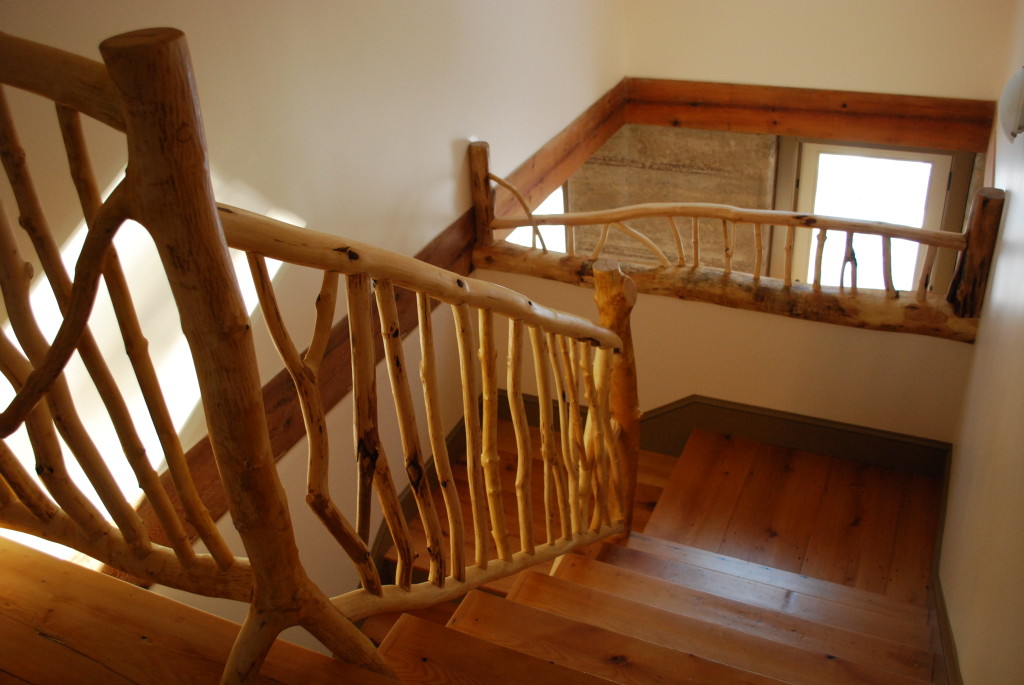 Thank you to Meredith Randolph from Four Winds for connecting me with Sue. Meredith organizes an annual local green tour and is a sustainable building designer.

Thank you to Stephanie, Robert, Sue and Karl for inviting us home!

It was true Maine hospitality, with an extra bit of sustainability thrown in for good measure!