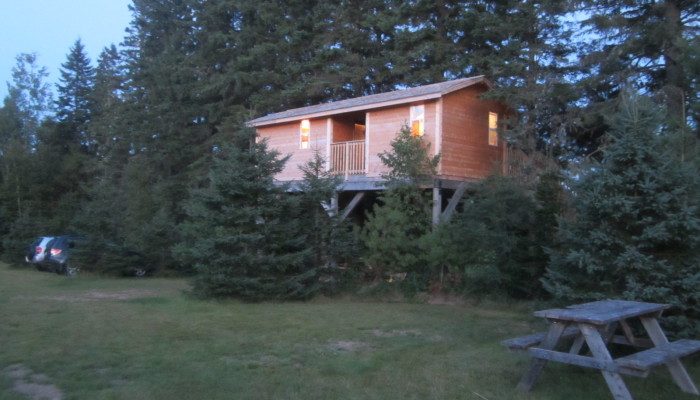 I love being up high in trees. I love high ropes courses and I love tree houses.

My sister Tracy heard about a campground in New Brunswick called Miramachi Camping. The owner had gone to California to learn how to build treehouses. He built the treehouses and now they are full all the time. We were very lucky to get the largest treehouse for three nights.

To get up to the treehouse, there was a sturdy stair well, which made it easy to carry up our stuff. 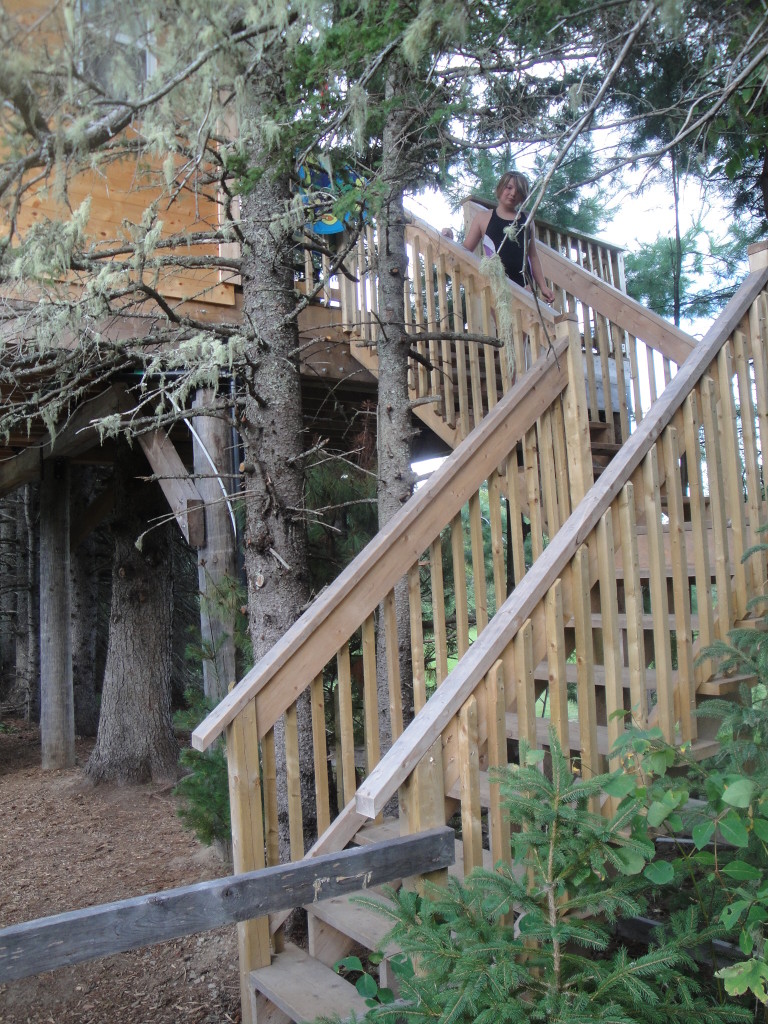 Stairs going up to the treehouse

Our treehouse had two rooms, and each of the rooms had a toilet / sink area partitioned off by a curtain. Super family friendly. The rooms were across from each other with a small hallway in between. My sister, brother-in-law and nephew slept on one side, and we slept on the other. 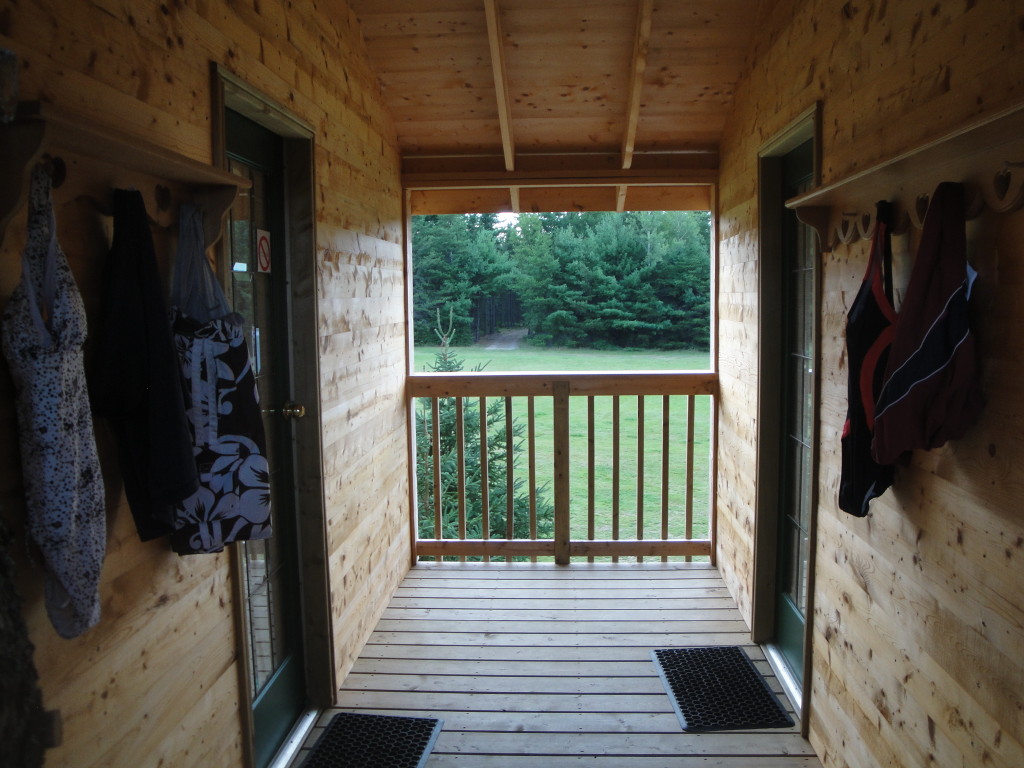 Hallway between the two rooms of the treehouse

We had the larger room, which had a double bed and three bunk beds. We took one of the mattresses into the other room so my nephew could sleep in the same room as his parents. 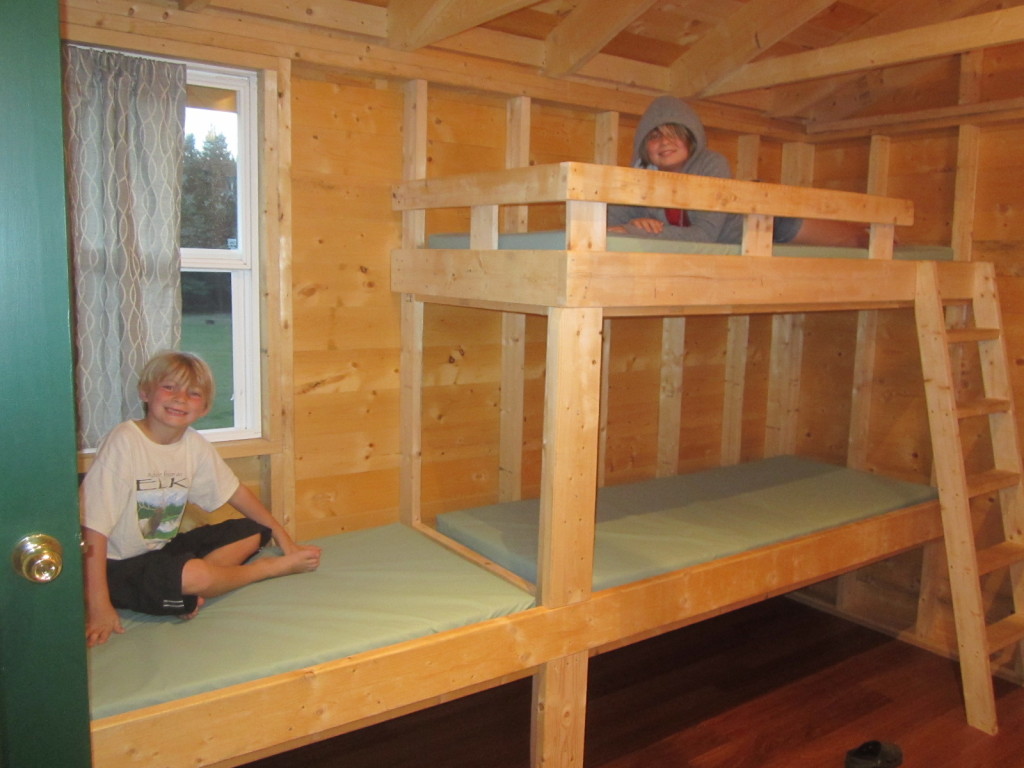 The mattresses were firm but comfortable. We brought our own bedding. 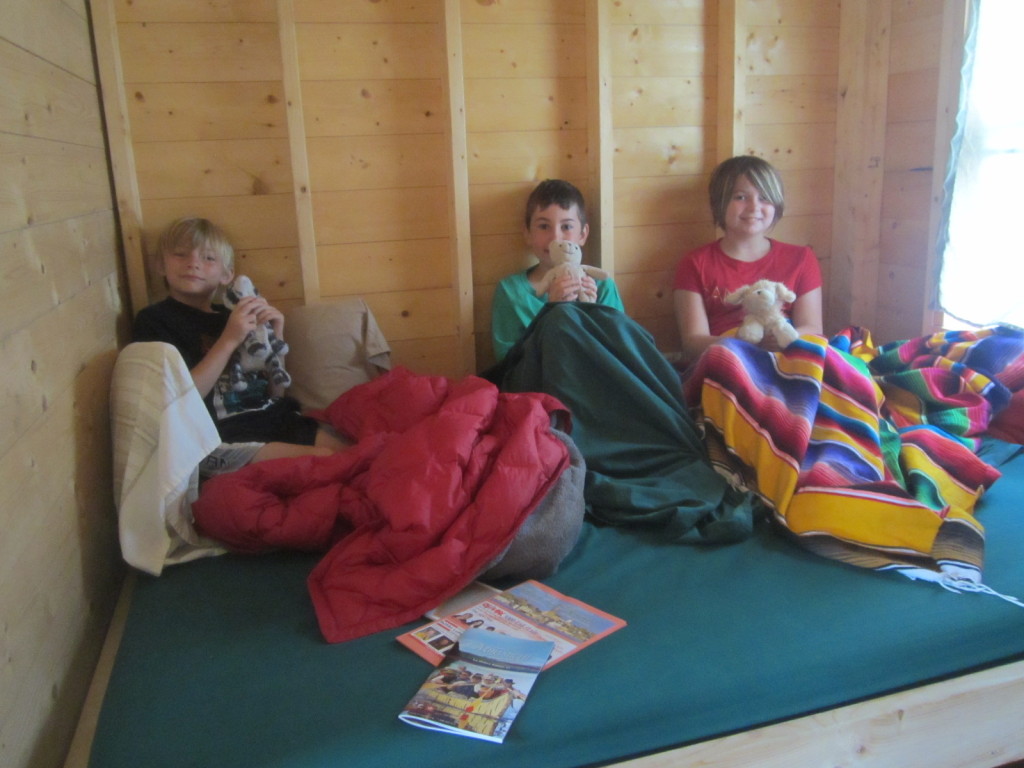 Outside the bedrooms / bathrooms was a large deck with seating. It was like a living room area. 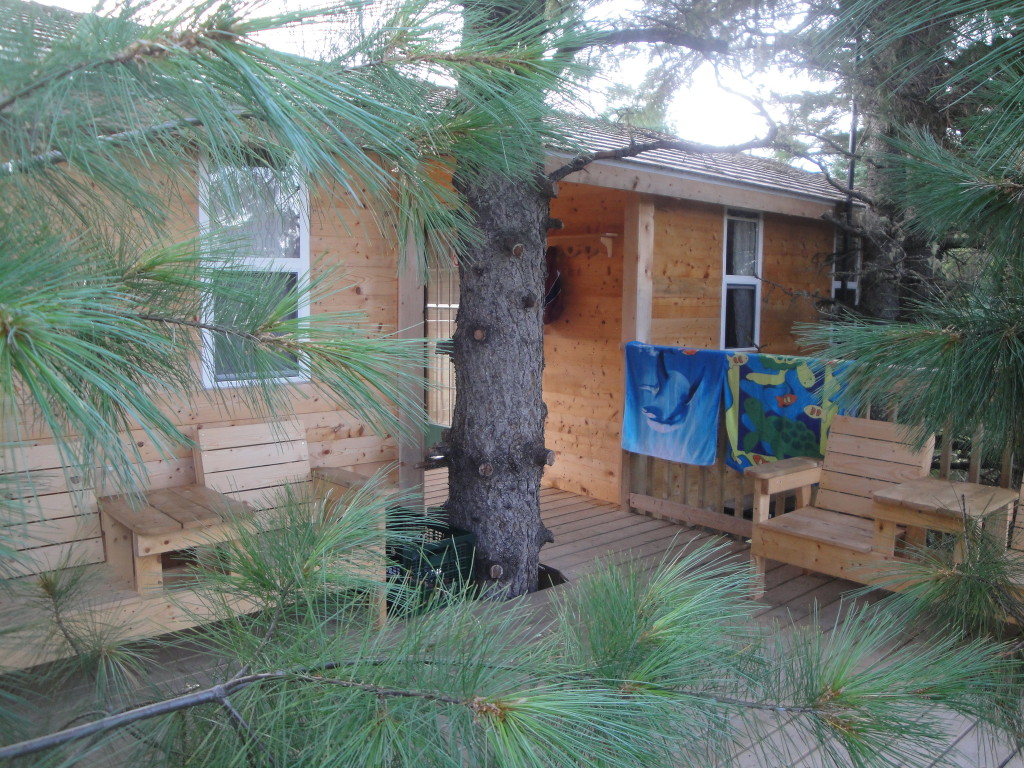 Tree sticking out of the treehouse deck

At times, you might forget you were in a treehouse except these branches poking up through the deck. 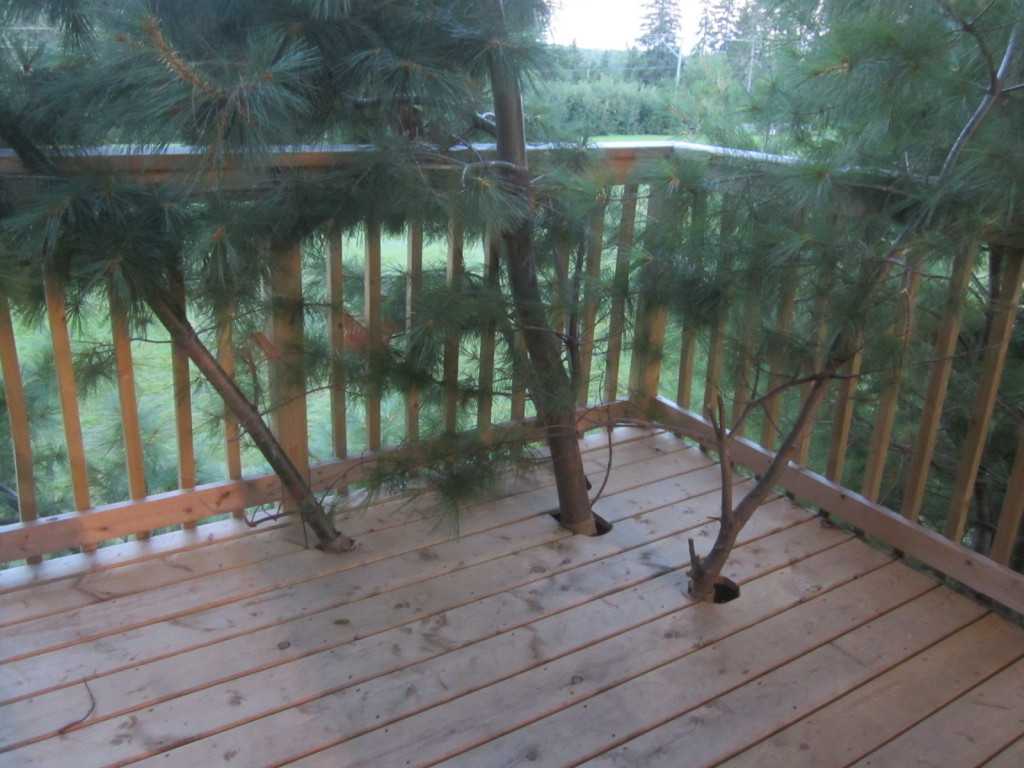 Branches poking out of the deck of the treehouse

Underneath the treehouse was a large picnic table. We set up a screened tent because each day at dusk, the mosquitoes would come out. We cooked on a Coleman stove there.

You can see the treehouse is built on telephone poles – the trees are not weight-bearing. I talked with the owner and he said that it was difficult to get permits to build treehouses that were actually built on the trees themselves, so this was a good compromise. Our treehouse was the most out-in-the-open – the rest were tucked into the tree cover and mostly housed 2-4 people. 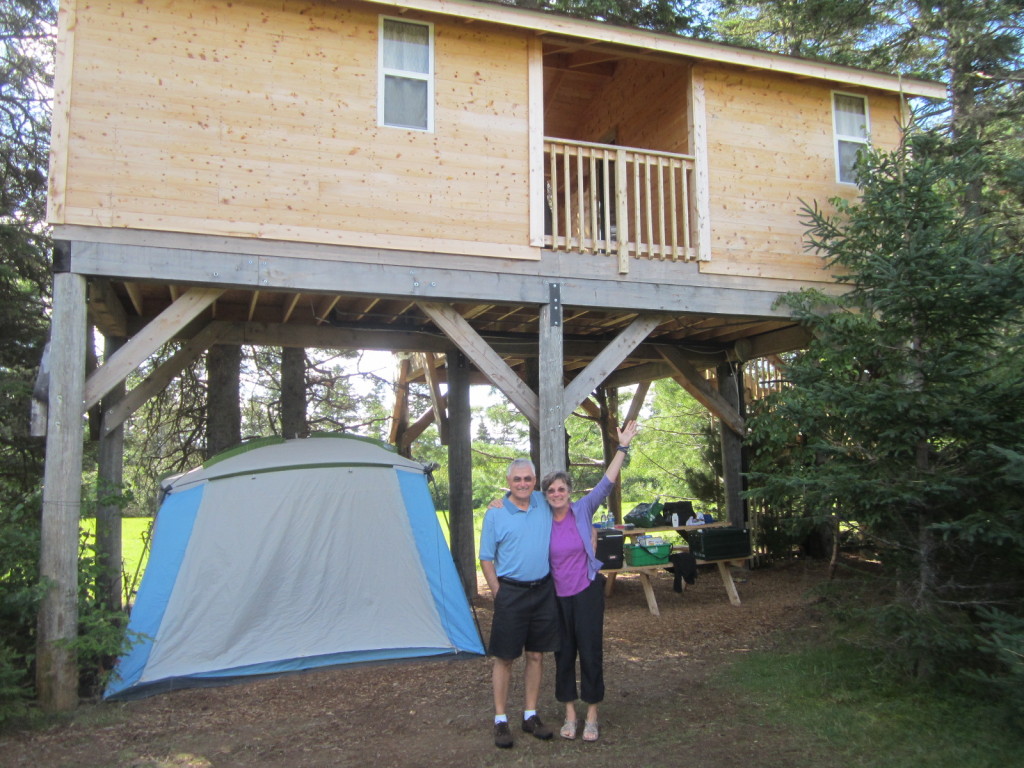 Mom & Dad in front of the treehouse

My parents came too but they stayed in a traditional cottage just a short walk away. Between the treehouse and their cottage was a swimming pool. 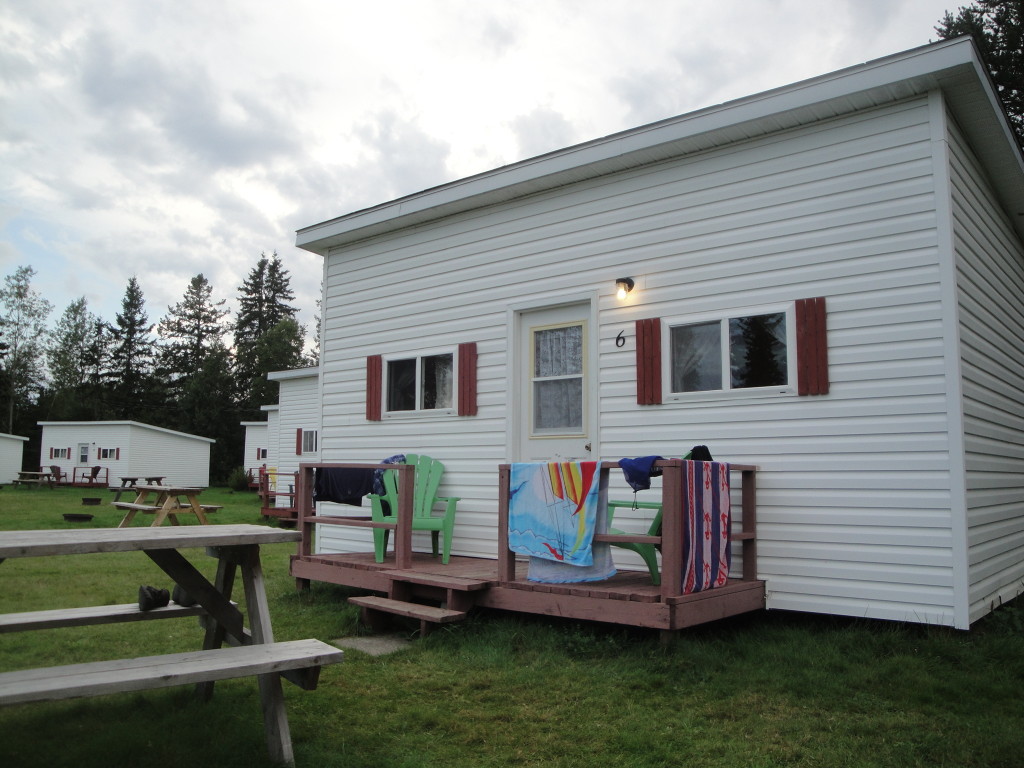 Cottages near the treehouse where Mom & Dad stayed

In the morning, we were usually awakened by the sounds of something landing on the roof. We thought it might be this red squirrel who seemed to live in the same tree. But there was a lot of thumping sounds, so it might have been just the tree dropping stuff as the sun warmed it. 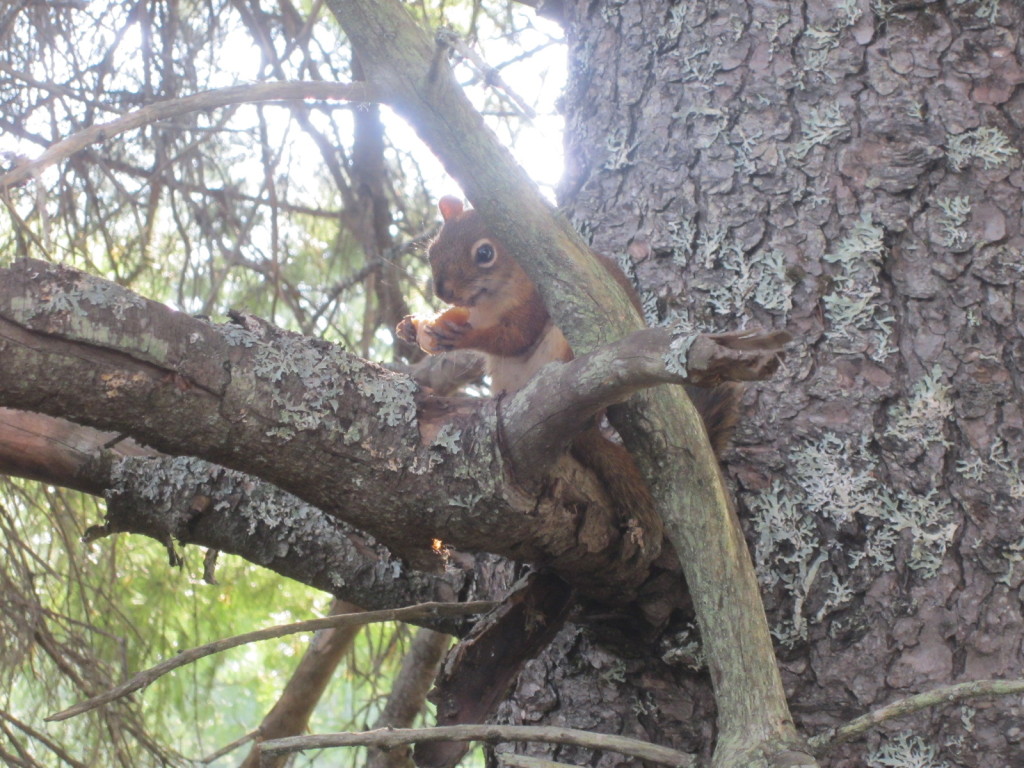 One night, we lit a campfire and roasted marshmallows & hot dogs. 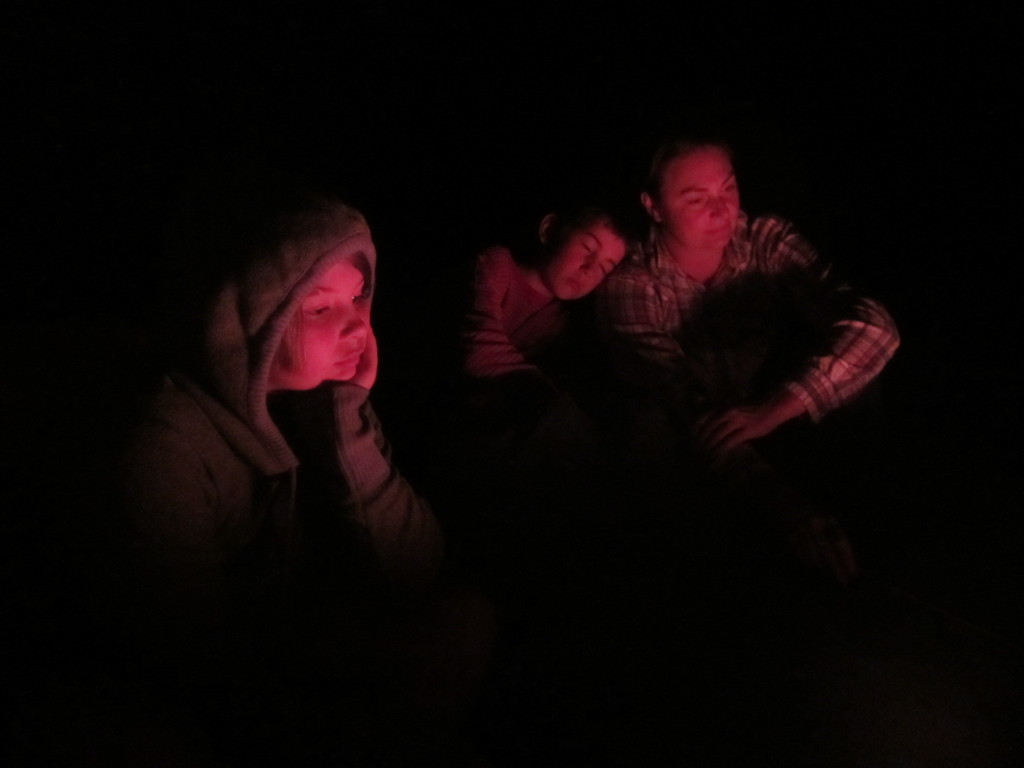 Getting sleepy by the campfire

During the day we visited two places. We went tubing down a river flowing into the Miramachi River and we explored Kouchibouguac National Park. Both activities were wonderful. 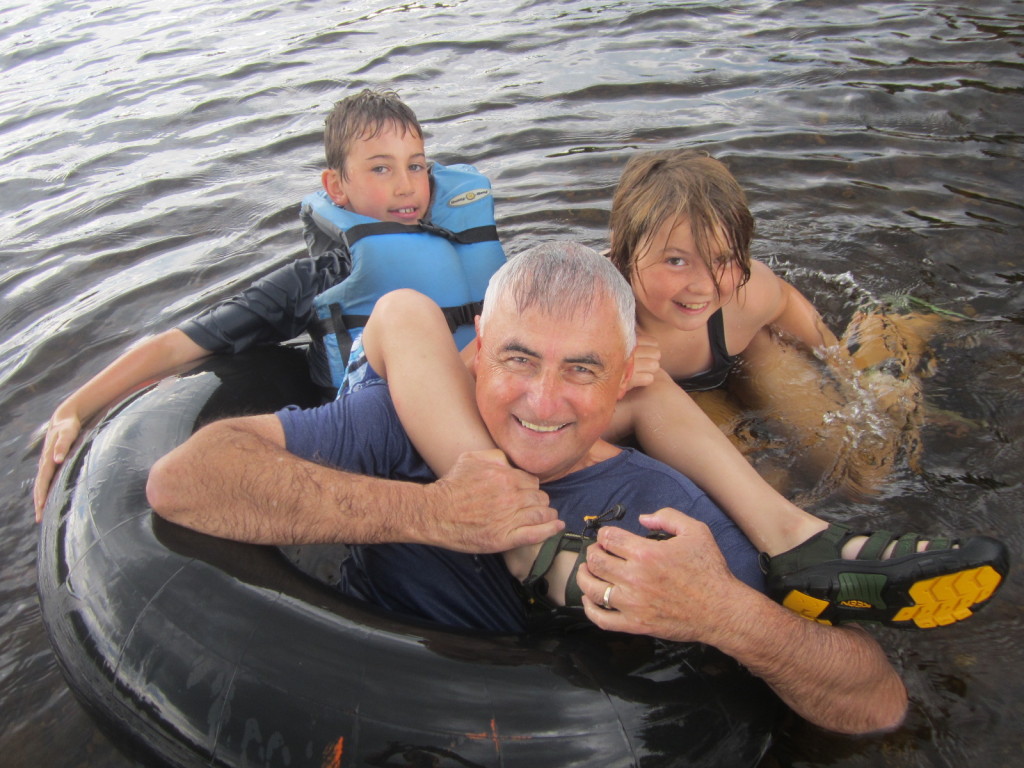 Tubing near the Miramachi River with Stewart’s Tubing 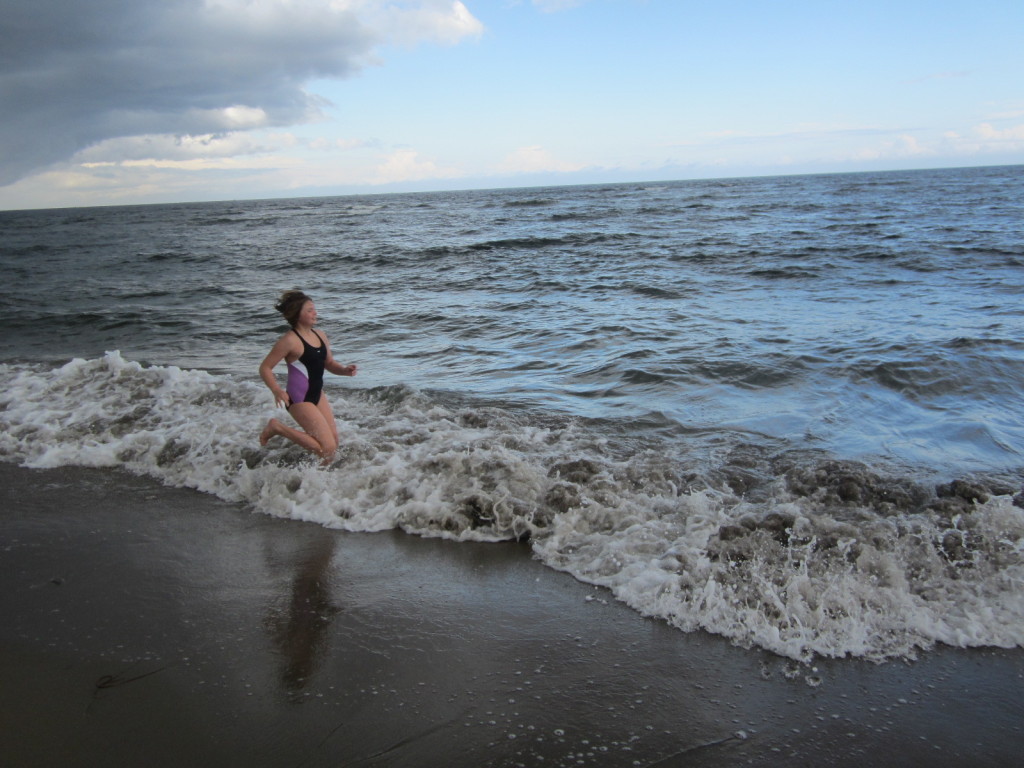 Nora runs in the waves at Kouchibouguac National Park 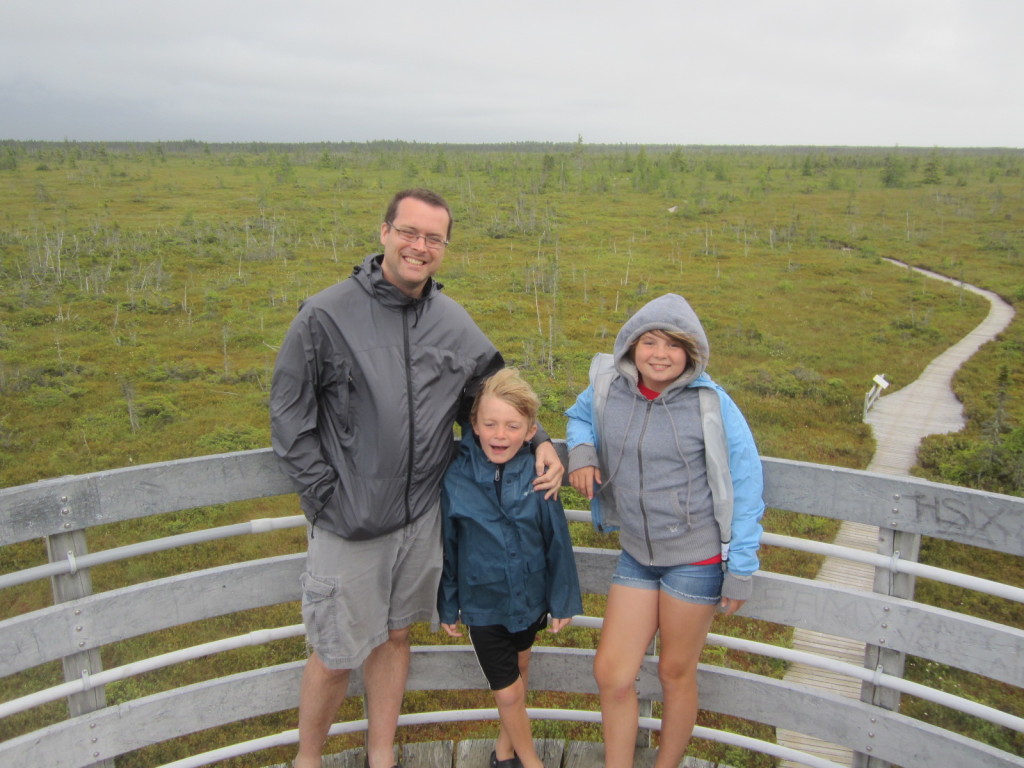 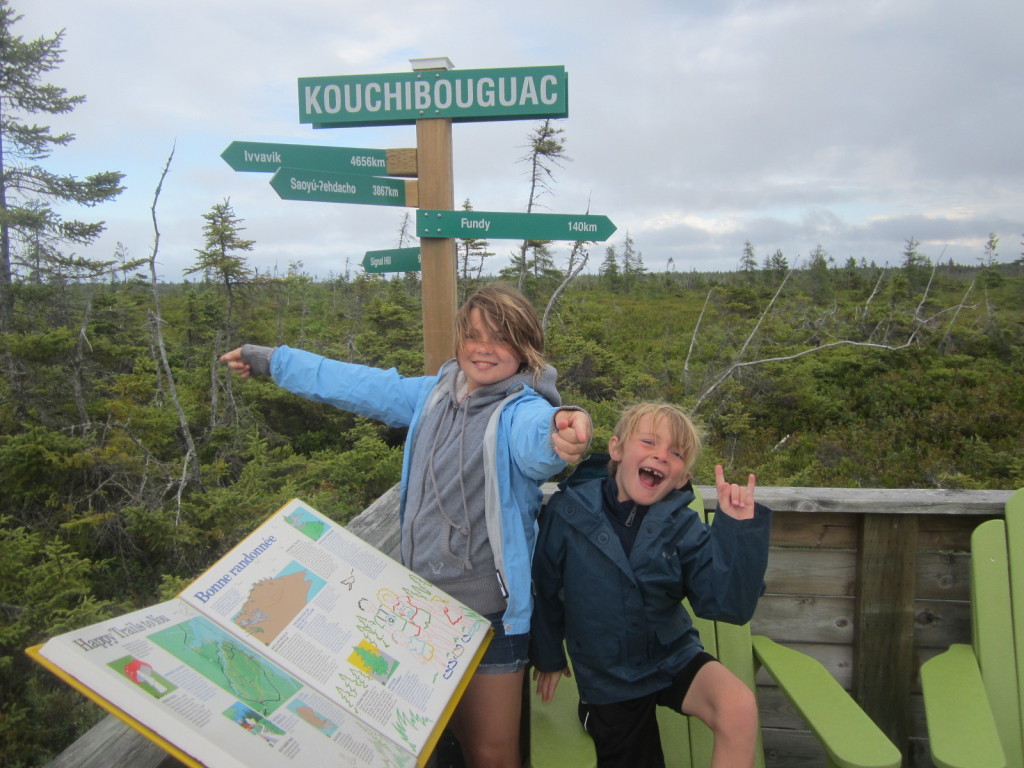 Thanks to my sister Tracy for organizing such a great vacation!! 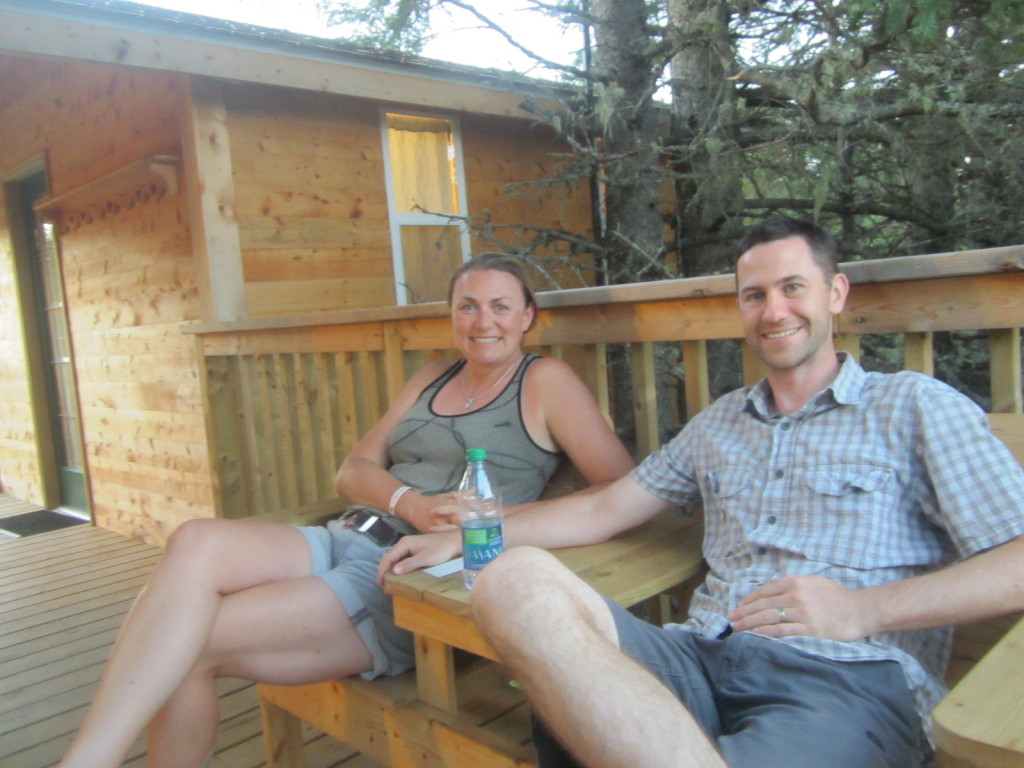 The outdoor living room area or deck of the treehouse

And one last treat – here is a sketch Nora did of us tubing: 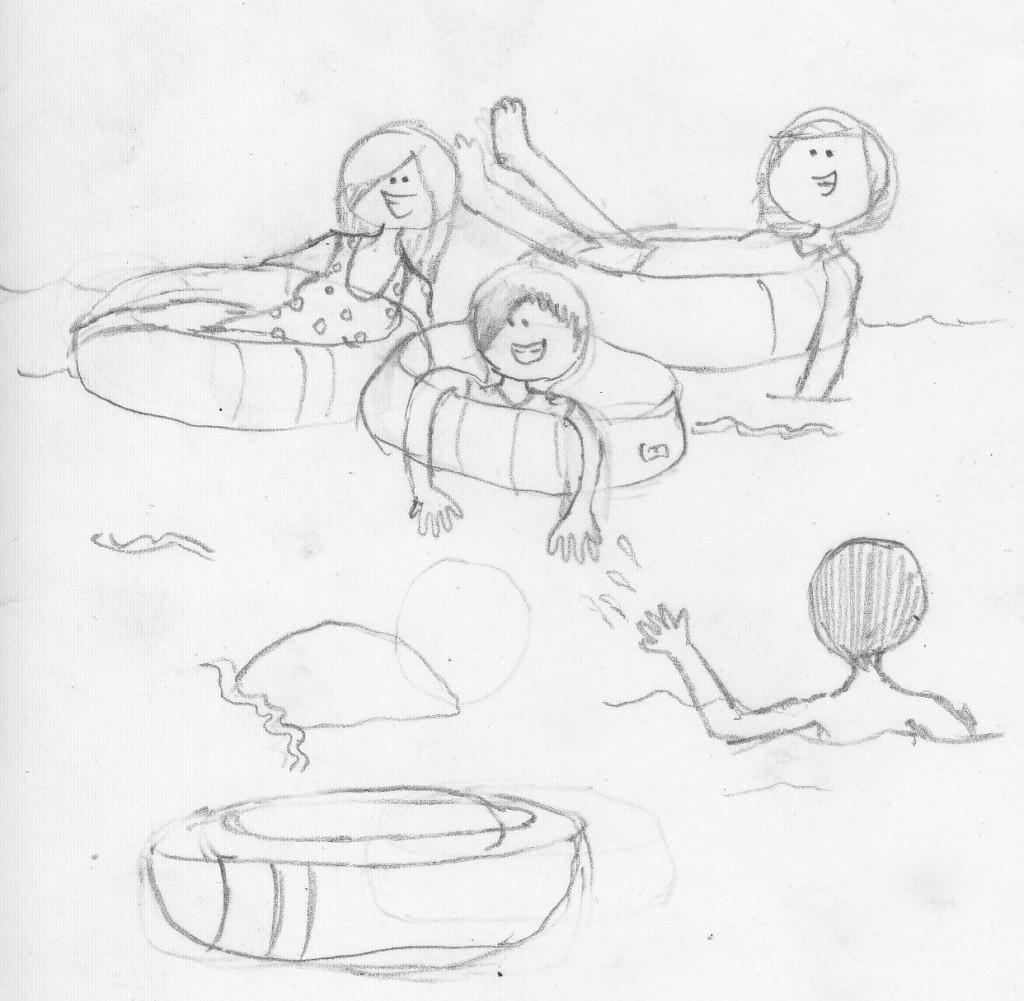