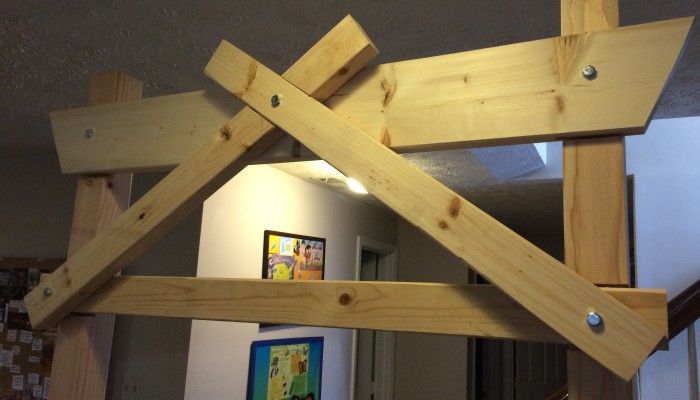 This has been one of the most exciting weeks! That’s a longer story, but here’s one of the reasons why – my husband Bob made me a Story Loom!

A Story Loom is a seven-foot-tall tapestry loom. That means you don’t have all the moving pieces of a floor or table loom. Instead you use your hands to weave and push the items into place.

Last year, I did my Weaving a Life Circle Leader certification. My instructor Susan and her husband Richard have invented a series of loom styles. For my certification, I was using a Journey Loom, which is a loom that can sit on your lap. They also make Earth Looms which are set up permanently (embedded in the ground) in outdoor locations like nature centers or schools. The Story Loom is the same size as the Earth Loom, except it stands on the floor inside. It has two large feet to keep it from tipping over.

In July 2013, I brought a group from the Family Nature Summits to Susan in Maine, where she led a weaving session on a Story Loom. It was so wonderful and I knew absolutely that someday I wanted to lead sessions with my own Story Loom.

Why Did We Make a Story Loom Now?

About a month ago, I was thinking about having a table at this year’s NoVA Maker Faire in Reston for Trashmagination, like I did last year. While I LOVED having a table at the Maker Faire last year, it was a LOT of prep work and on the day of the event, my friend Louisa and I worked our butts off working with the 5000 attendees to make milk jug butterflies and plastic cap cap-erpillars. If I was going to do it again, I wanted to come up with a table activity that required less prep work and an activity that did not require me to make enough for 5000 people.

Bob suggested that he could make a Story Loom. It may sound like an obvious suggestion given what I have told you, but we do not do much wood-working in our house. We are handy and fix/paint/install things, but we don’t have wood-working tools. But we had read about the wood-shop at the Reston Community Center for years and never used it. We checked online and it costs only $7 to use it for a whole evening (6-10pm on Tuesdays). They also have Friday & Saturday hours during the day, but the Tuesday evening spot was perfect for our family schedule.

So I purchased the pattern from Weaving a Life for $45. Bob went the very next Tuesday night to talk through the project with the person who runs the wood shop. They looked over the pattern and figured out that Bob could definitely do everything he needed with the tools at the wood shop.

I would have LOVED to make it with him, but someone has to be with the kids. And Tuesday nights, Nora & I have guitar lessons, so we already had a schedule overlap.

Bob said he really enjoyed making the Story Loom. The first Tuesday he arrived with the wood, there were not many other people in the woodshop for the first hour, so he got almost the full attention of the instructor. Bob learned so much from that time. He came home that night invigorated and with the wood almost fully prepared.

For those of you who know about wood-working, the trickiest part of this project was “ripping down” the wood to smaller sizes. Wood comes in standard sizes, and you could make the loom with those sizes, but the pieces are quite heavy. Given that this is meant to be a portable loom, and I will be doing it most of the time by myself, if Bob could make the big pieces smaller, that would be great. So he used a variety of tools to “rip” the 4×4 pieces down to something like 3×3 for example.

The next Tuesday, he was there for two more hours and he finished everything except drilling the holes for the bolts. He did that in our basement because there was not a big enough space in the wood shop to lay out the loom fully assembled and clamped in the right position. So I got to take photos of him finishing the loom: 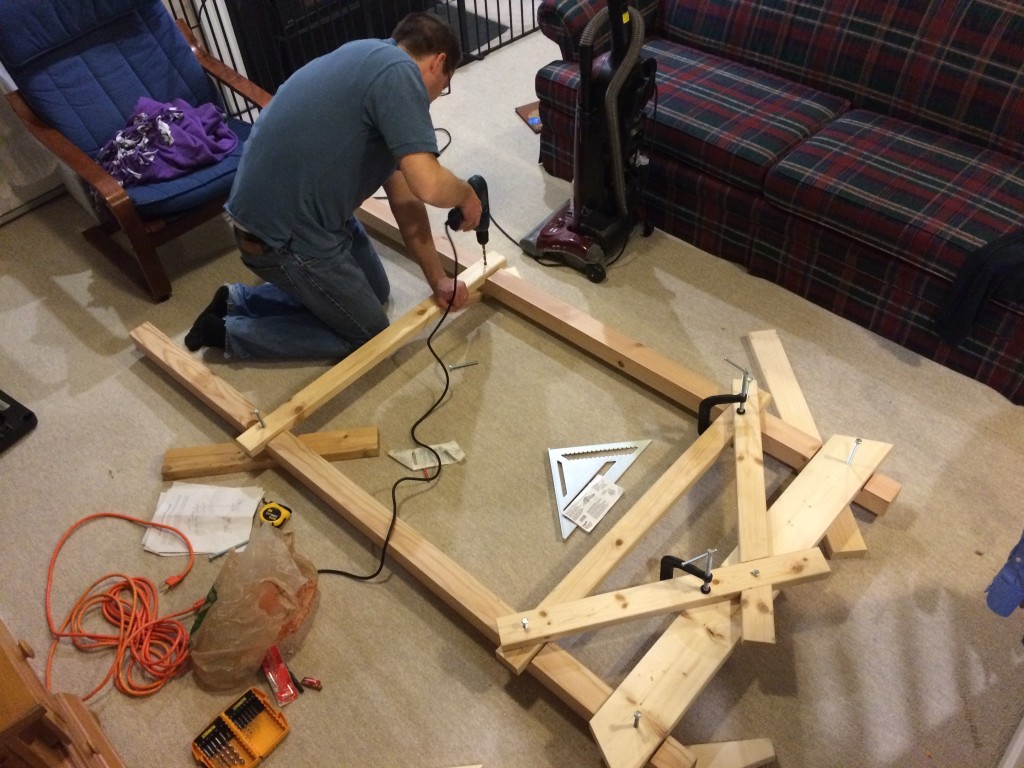 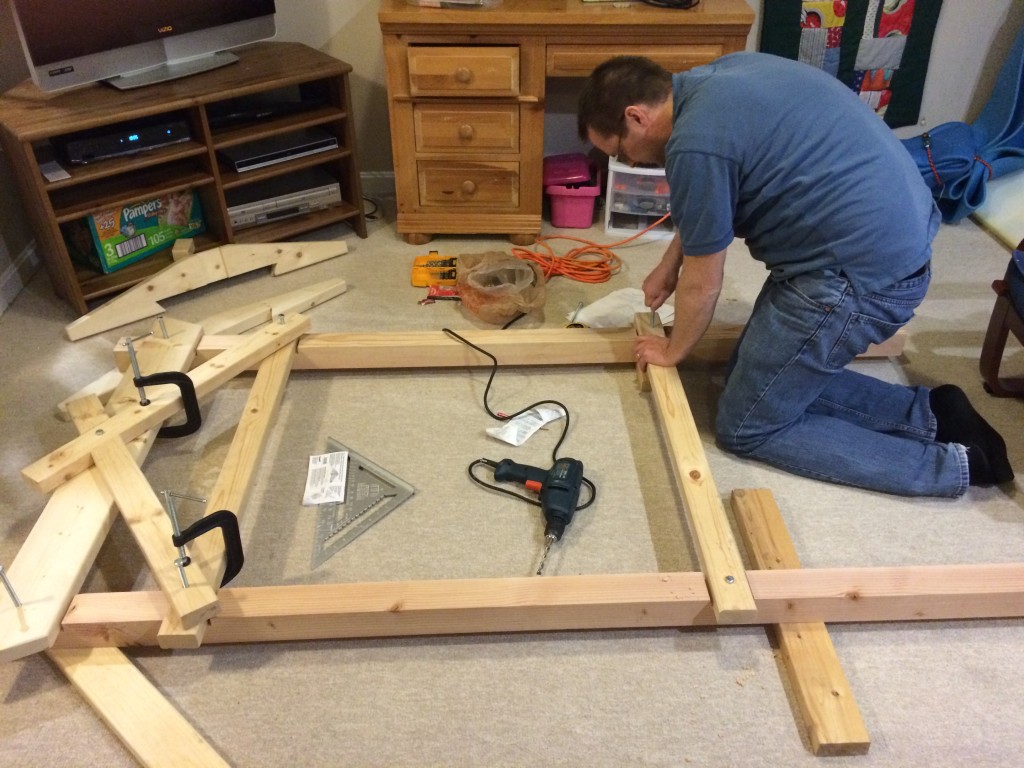 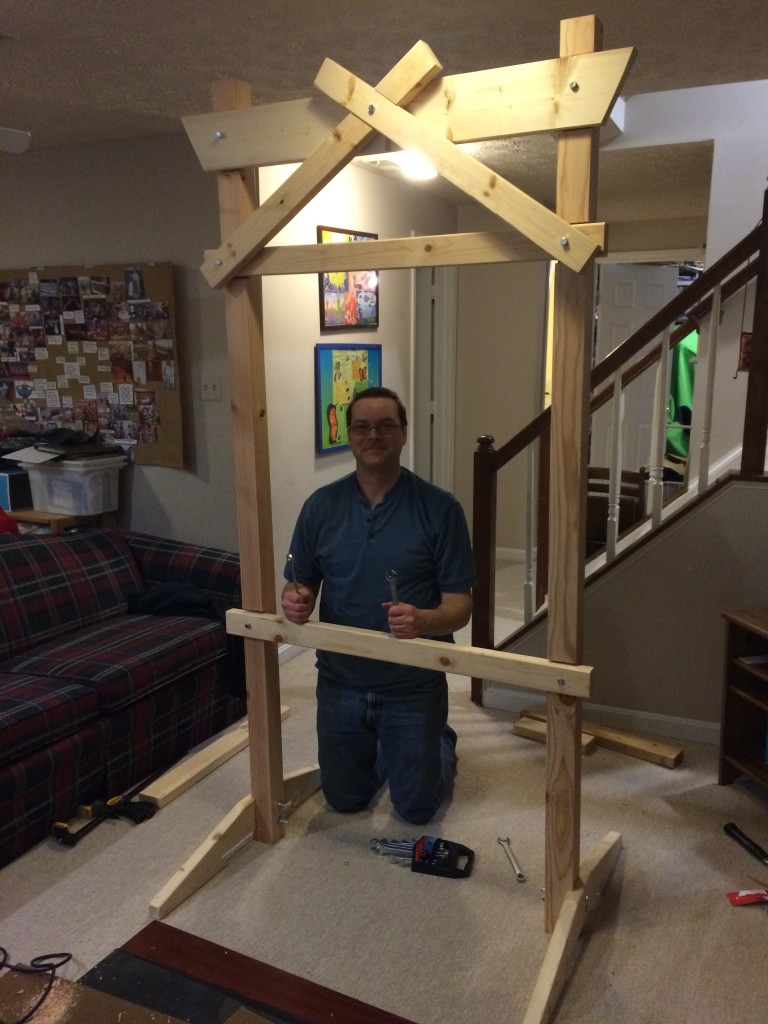 What Will We Do Next with the Story Loom?

Part of the reason why Bob hurried to make the loom was that I was invited by iSchool for the Future to have a table at a Family Science Night – tonight! So we decided to use this event to test the Story Loom with a smaller number of participants, and see what would make the Maker Faire experience more successful.

Come tonight to see the Story Loom in action, and help me test!

Here’s the link to the event – Family Science Night at Forestville Elementary, off route 7 near Reston – 6-7:30 pm

We will be weaving trash into the warp. Some trash items I am preparing are:

We’ll see what else gets made today for the weaving!

So exciting! Photos to come!