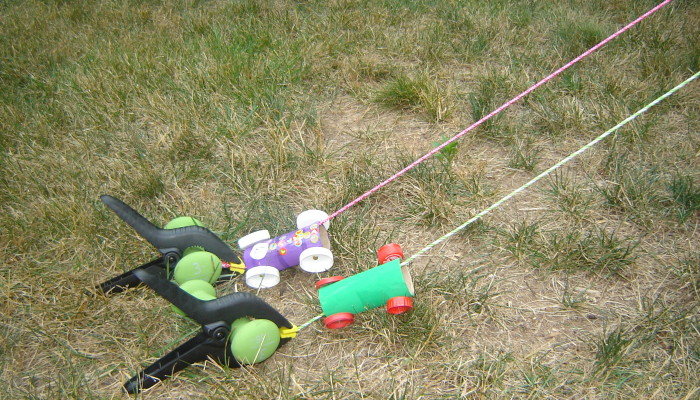 There are LOTS of tutorials for how to make toilet paper roll cars. They all involve painting toilet paper rolls in bright colors. Some cut a hole in the top so you can put an action figure in the car. Some make wheels from black paper, some from drilling a hole in plastic caps. Most attach the wheels with metal brads.

What I wanted to show you was how we raced our toilet paper roll cars for my son’s birthday party when he was turning four.

We set up two ropes from our back deck down to the ground. The ropes were attached to two hand weights attached to two pinch clamps. I held the ends of the rope up on top of the deck and would load the ropes with one car per kid.

The kids would each hold on to the car they had decorated. With an “on your mark, get set, go!” they would let go and the cars would slide down the rope to the ground. There was not much strategy to it, such as putting more weight on the front or back. The racing was not meant to be as intense as Cub Scout pinewood derby events.

My husband was on the ground at the finish line. He would unclamp the ropes, take the cars off, and put them in a bucket attached to a rope. The kids would then pull up the cars for the next race. You can see the bucket in the photo here.