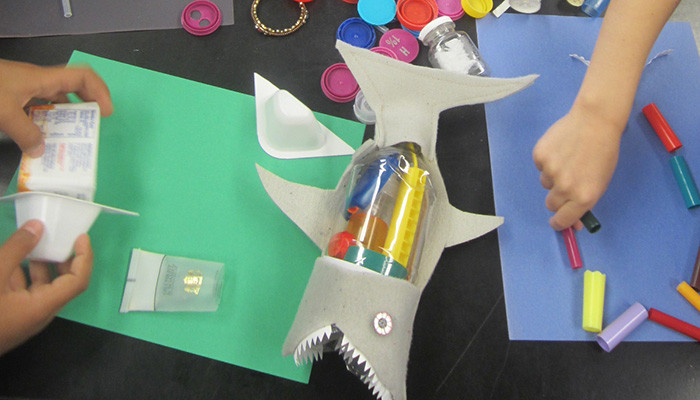 Results of the Teacher Survey

A few weeks ago, I surveyed teachers about the TrashAnatomy shark model. Here’s what they told me:

Overall, the teachers liked the shark. Most gave it a very high score on meaningful and unique.

Testing the Shark with Kids

So today I took the shark to a science camp being held in Reston called iSchool of the Future. There were seven elementary-school-aged kids. I started our session by showing them many Trashmagination projects. They especially loved the clothing made from juice pouches and the animals made from plastic caps.

Next I showed them the shark model & a poster which labelled the various organs. I told them about my favorite parts of the shark, which are:

Getting the Kids To Build Their Own Models

Then I pulled out a big container filled with trash in many shapes and sizes. I gave each child a piece of paper (to delineate their work space) and asked them to use the trash any way they wanted to make their own shark anatomy model.

I had been inspired to do this idea by artist Sayaka Ganz who posted a note about giving kids trash to build with at an art camp.

Building their shark models from trash

Here’s what I observed about the kids’ art:

They wanted to use the trash to show the outside of the shark – It was too abstract to think about the organs. 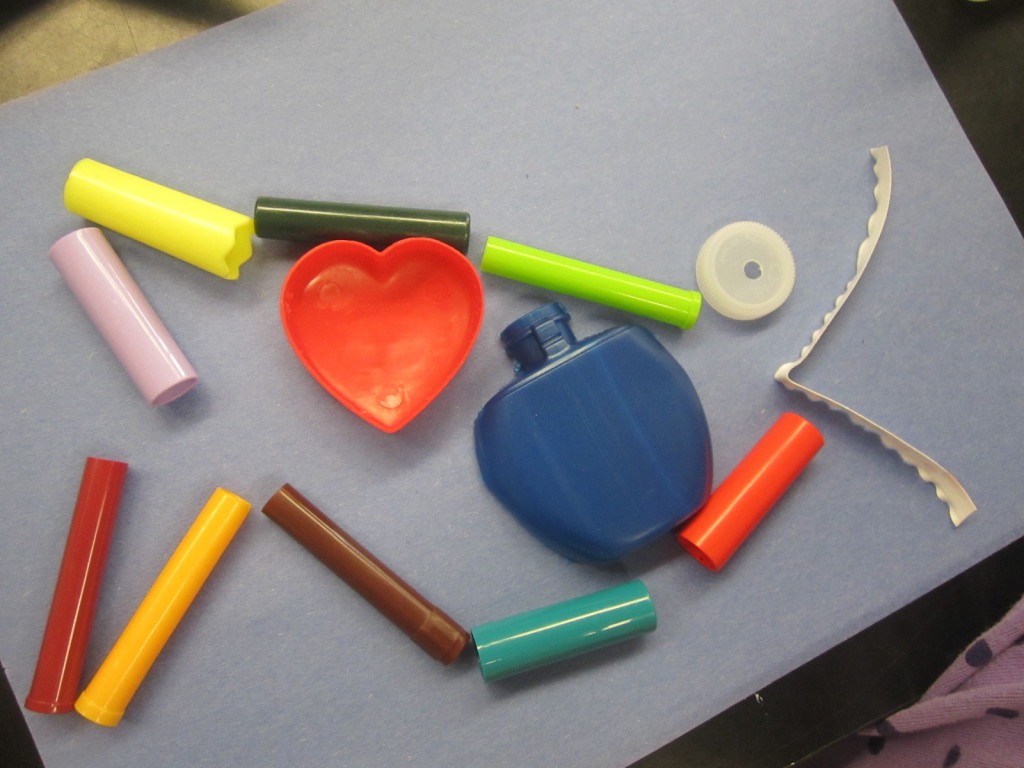 The main body parts they liked were the fins and teeth – That is the body parts most people think about with sharks, don’t you think? 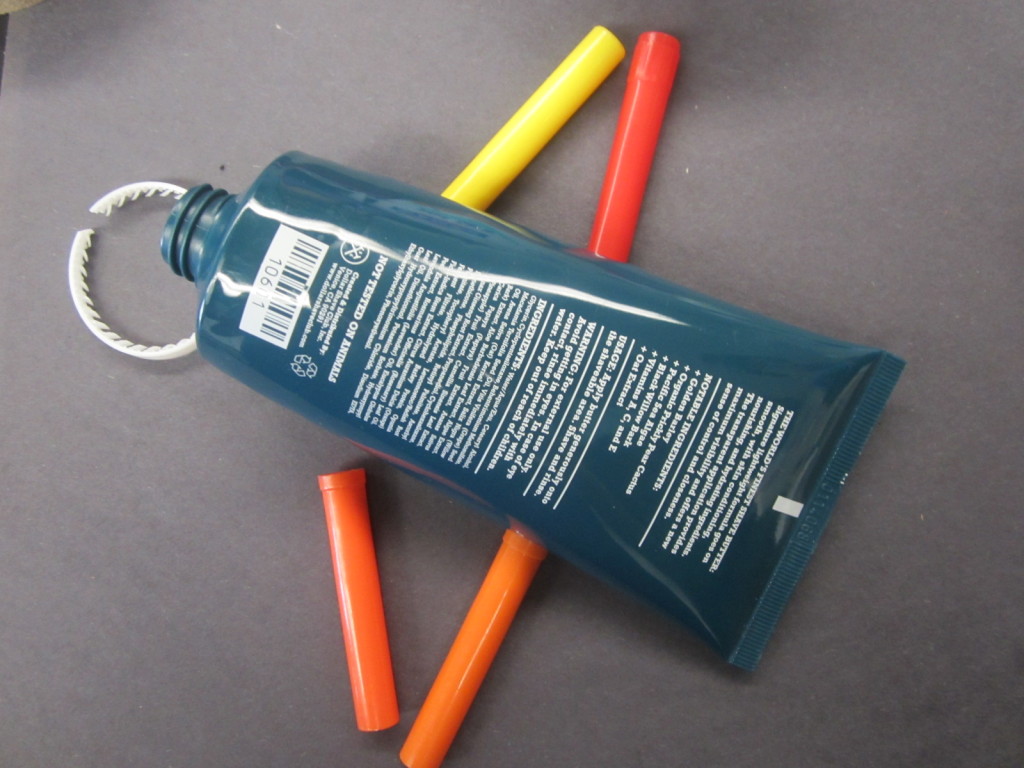 They kept asking me to use scissors – They loved the teeth on my shark, but they were one of the body parts that were made using scissors. I didn’t want to go down that route because most of the objects are not possible to cut with child-safe scissors. I think the fact that the trash is not the “right shape” to represent the organs was frustrating to them. They did not like keeping it so abstract. 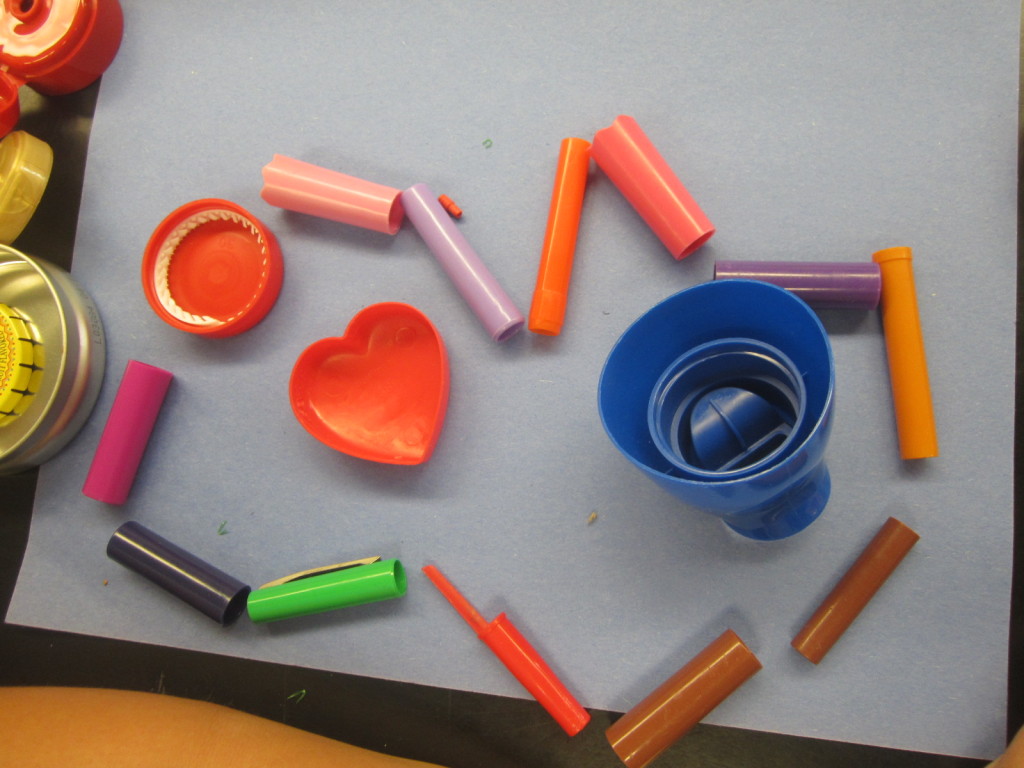 I like this funny little shark – The metal bottle cap provides the sharp teeth, the tube serves a similar purpose as my bottle, and that marker cap as a fin. I call this one “minimalist shark.” 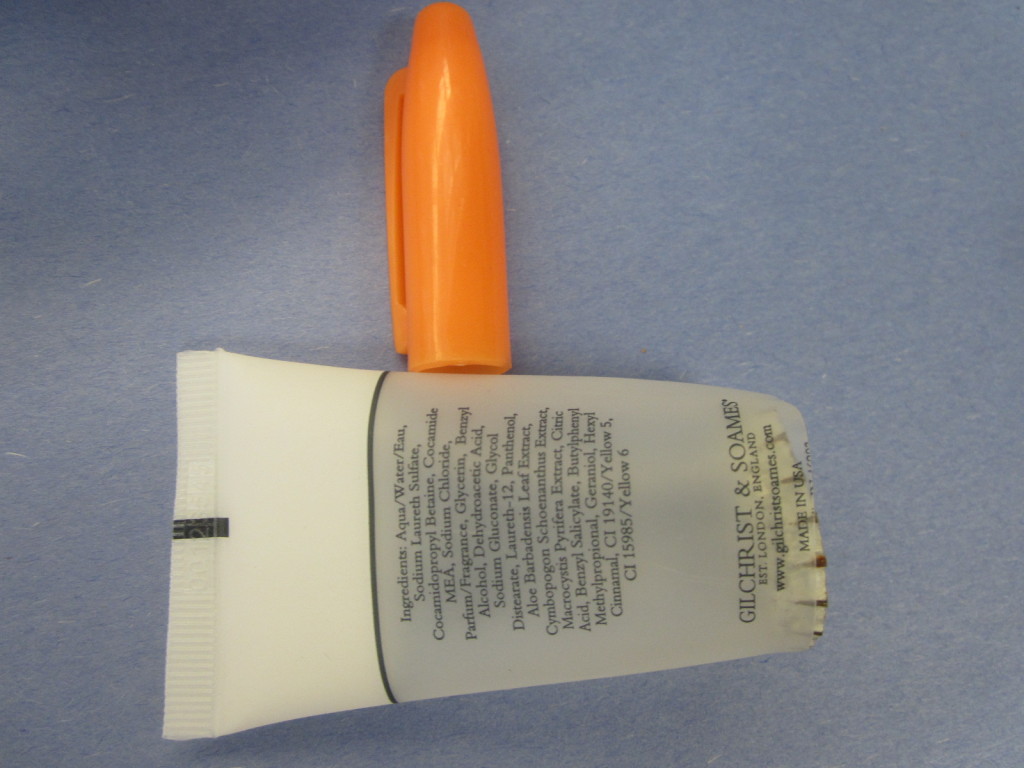 Clearly, the shark is fun with smaller kids, but the anatomy concept is not there. If I had shown them a solid shark without organs, they probably would have built the same models. I think anatomy is not developmentally appropriate for this age?

I might need to focus on a new customer. I could put the shark up on an online store and see if anyone buys it – then ask them – what was it about the shark that made you buy it? I think it might be a novelty products – a discussion topic. In fact, one of the teachers who took the survey wrote, “Appreciate use of recycled materials, but see this as food for thought vs. necessary product.” When I first read that comment, I was sad, but now I think it is probably just accurate.

However, food for thought is still a good thing in this world!

What if the Organs Were Sewn?

When I originally envisioned TrashAnatomy, I imagined the internal organs would be sewn out of fabric. There are many cool plush products being used to teach science such as I Heart Guts and Giant Microbes. On Etsy, there are organs made from bake-able clay, crochet, felt, knitting and fleece. The wonderful thing about sewn organs is that they are hardy and can be smooshed inside a shark body over and over again. Durability was a concern that the teachers raised in the survey.

Sewn organs could make the shark organ’s more inviting to touch. I noticed the kids were not that comfortable touching the shark anatomy perhaps because it looks fragile. It does look rather odd when you pull it out of the body. But they loved to touch all the other recycled things I made.

I think if the internal organs were sewn, it would also be more appealing to the people who are looking for a novelty gift because it would be less “weird” and require less explanation. I think using actual trash for the organs might be too confusing to people. It’s too much of a mental leap. At one point, the teacher at the camp asked me, “how did you get the trash so clean?” which I thought was a very odd question, but I think it points to a fact that people find it hard to leap from trash to organs. It would not be the first time that one of my ideas was just too far from normal experience for people to value the result. 🙂

Overall, I’m very glad I took the shark to the camp. Nothing beats making it real and seeing how people respond when you are inventing!