This weekend, I had the HUGE honor of playing Taiko with Nen Daiko at the Cherry Blossom Festival in Washington DC. How can I express to you all the feelings of this day?

When I woke up, at first my stomach started churning. I said to myself, “You will make yourself really sick if you keep this up so you are not allowed to think about this anymore.” Our whole family drove downtown. Bob took the kids while I walked to the place where we were unloading drums. The streets were filled with floats for the parade, beautiful women in kimonos, everything was pink.

Pushing the drums to the stage was a comedy routine as we kept getting stuck in potholes. 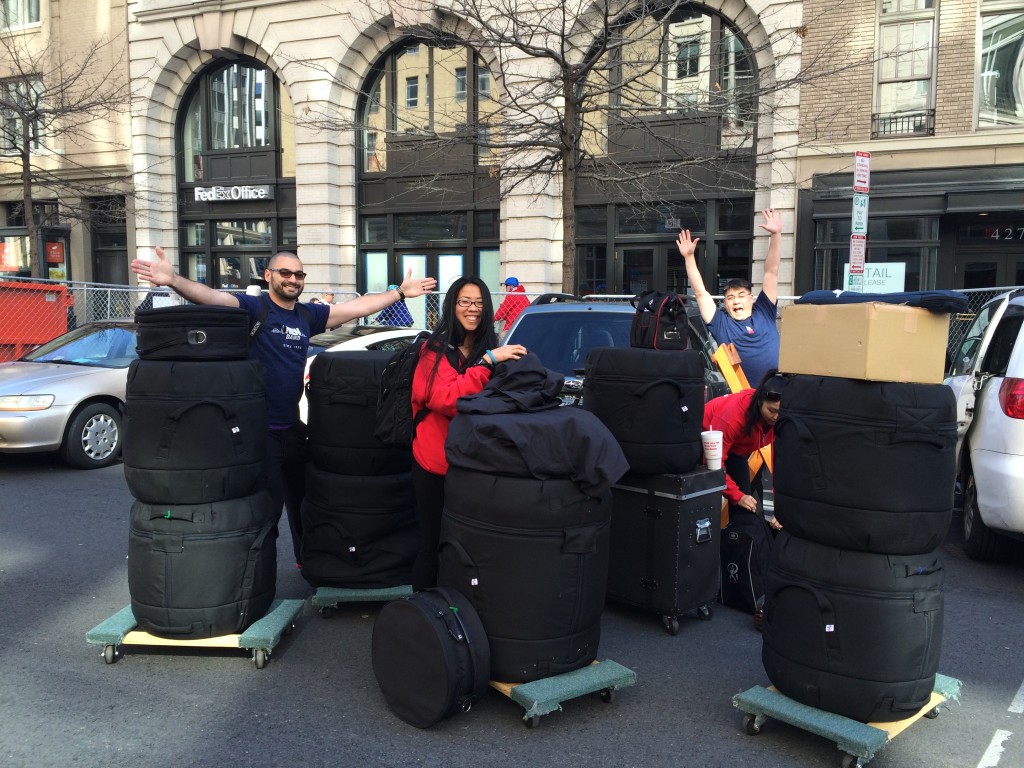 Transporting drums to the Cherry Blossom Festival stage – They got stuck in potholes a few times! – Here’s Brig, Hanae & Brant, with Lisa peeking out underneath.

We got the drums set up on the stage and waited until the gates opened. It was quiet for a short time.

Then it was time to perform! The first song was Rouga, my favorite Nen Daiko song about a wolf pack. It’s a long song but I wished it would go longer because next it was Renshuu – my first time in a public performance. I was SO grateful to my fellow apprentice Jeff who has become SO solid in keeping the tempo and kicking off this song with SUCH gusto. I actually felt my stomach settle just before our song started, and when my bachi, or drumstick, hit the drum for the first time, I felt very calm and clear. It was still very hard! I wanted to kiai more (which means shout out encouraging sounds to my fellow players) but I was worried it would throw me off.

Here’s some video clip highlights – 30 minutes condensed into two minutes – thanks to Bob for taking video from the front row!

After the performance, we moved the drums through millions of people to another stage for another performance. For this one, we were going to play an inspiring song while calligraphy artist Bien Yoshino painted some HUGE characters on two large screens. I was not playing in this song, but I helped set up the stage and played with people’s kids while they played.

While we were waiting for the second performance, Nora & Russell hung out with me behind the stage. Russell took some photos of us: 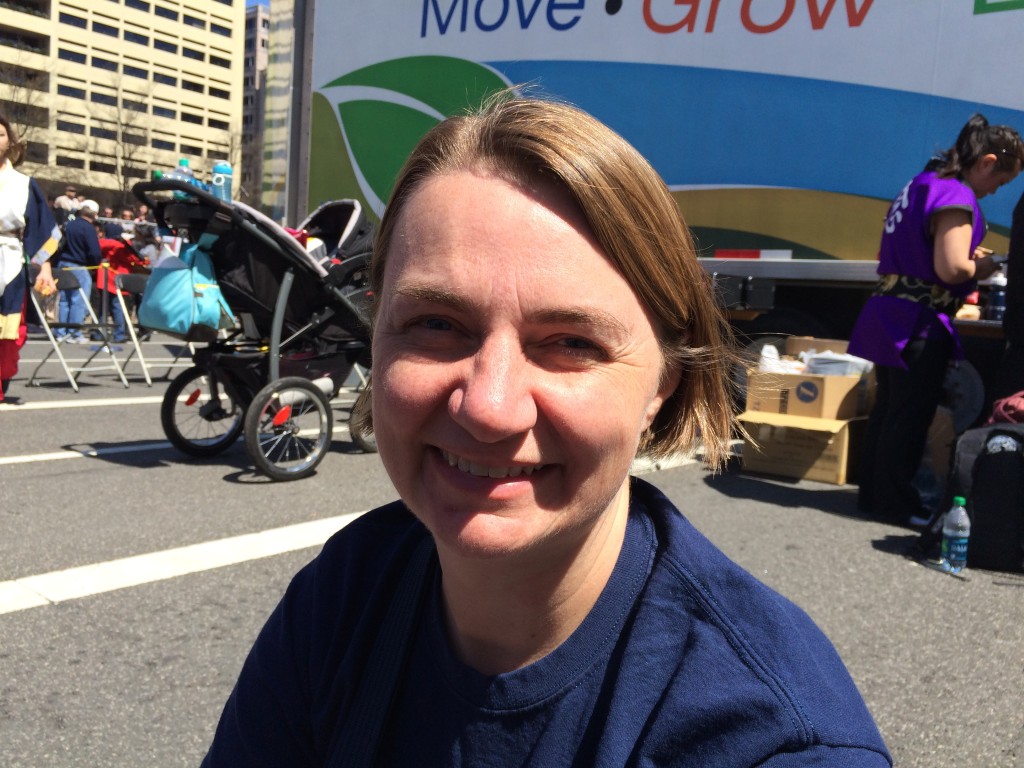 Photo of me by Russell – backstage at Cherry Blossom Festival 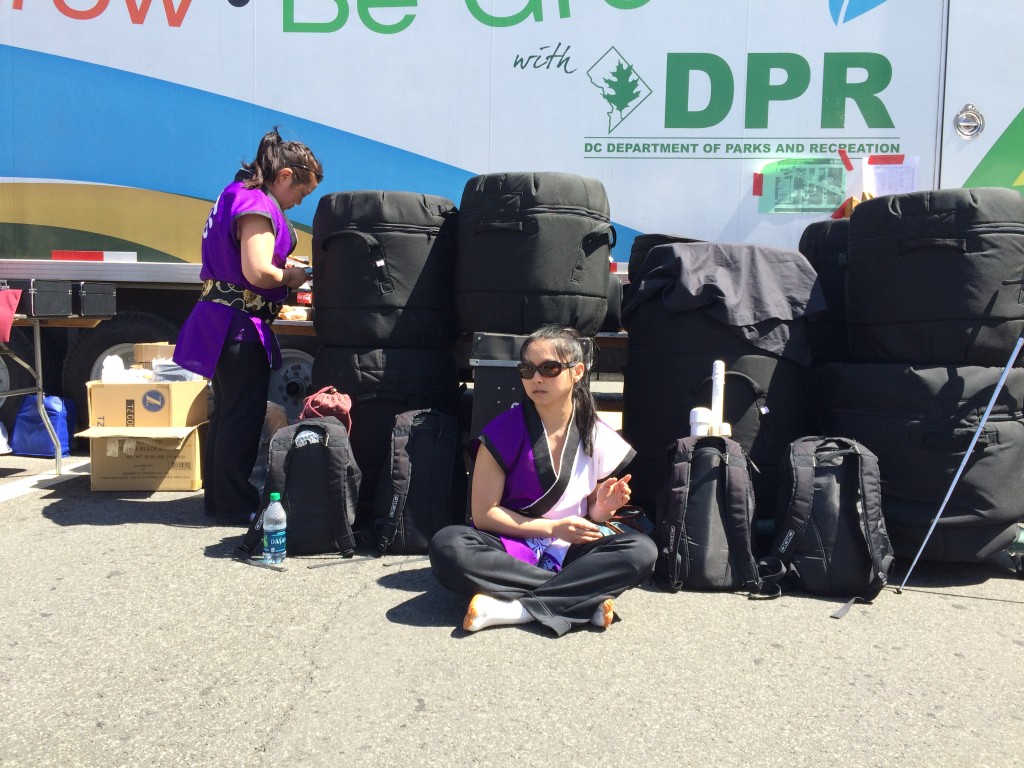 Lisa practices her part, listening to the song on headphones & tapping her leg while waiting to perform 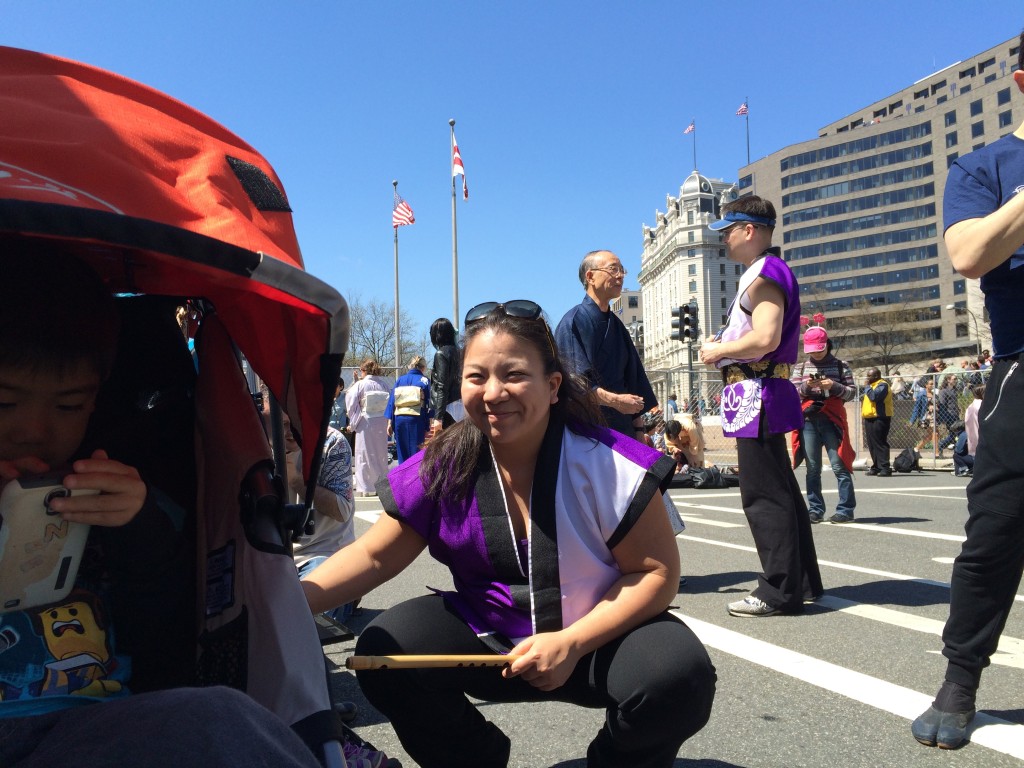 Maya keeps an eye on her little guys

Here’s a photo of the group with the completed calligraphy art: 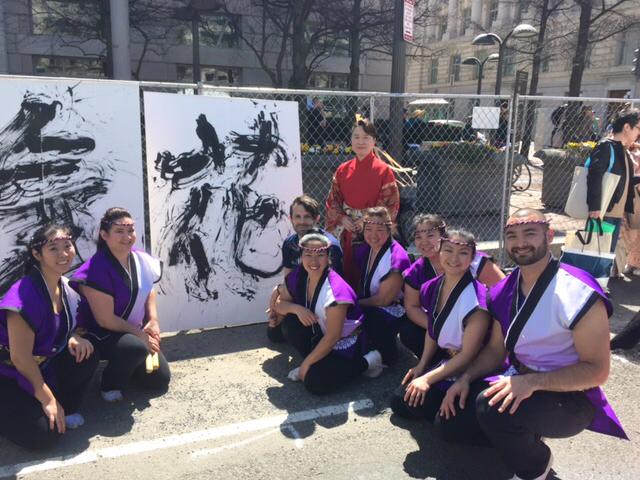 Nen Daiko members with calligraphy artist Bien Yoshino – I’m not in the photo because I was taking care of kids in the background!

To thank us for our collaboration, Yoshino gave us each small discs painted with characters. These were the characters chosen for me by other Nen Daiko members: 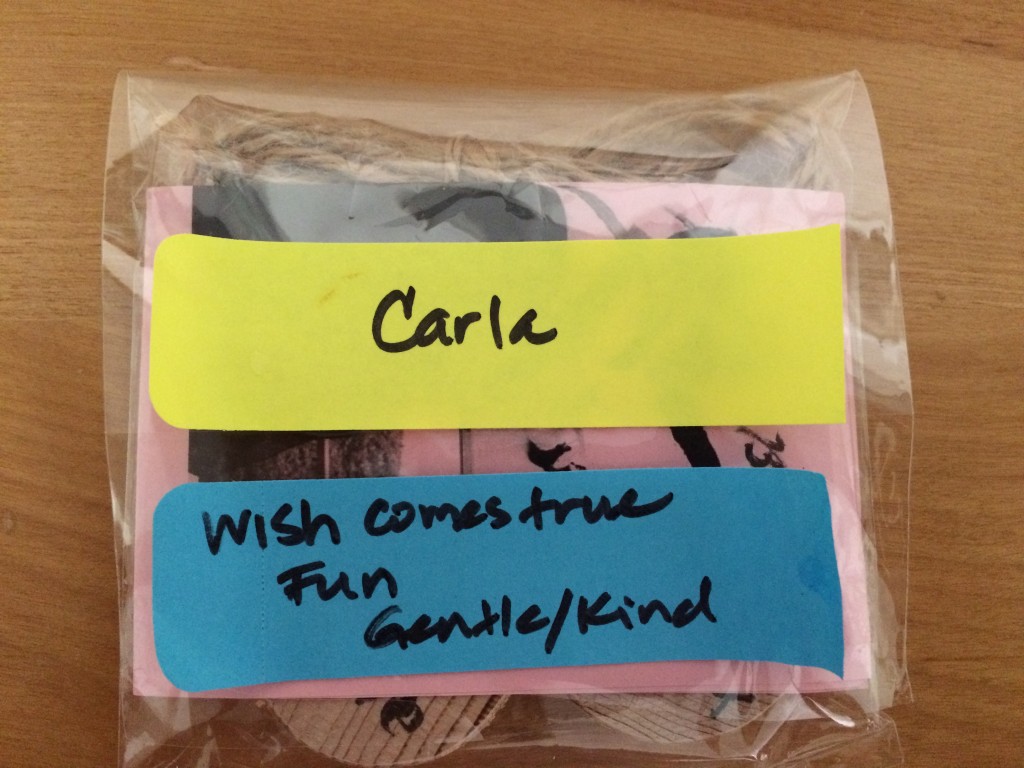 Calligraphy discs – gift from Bien Yoshino – messages that suit me 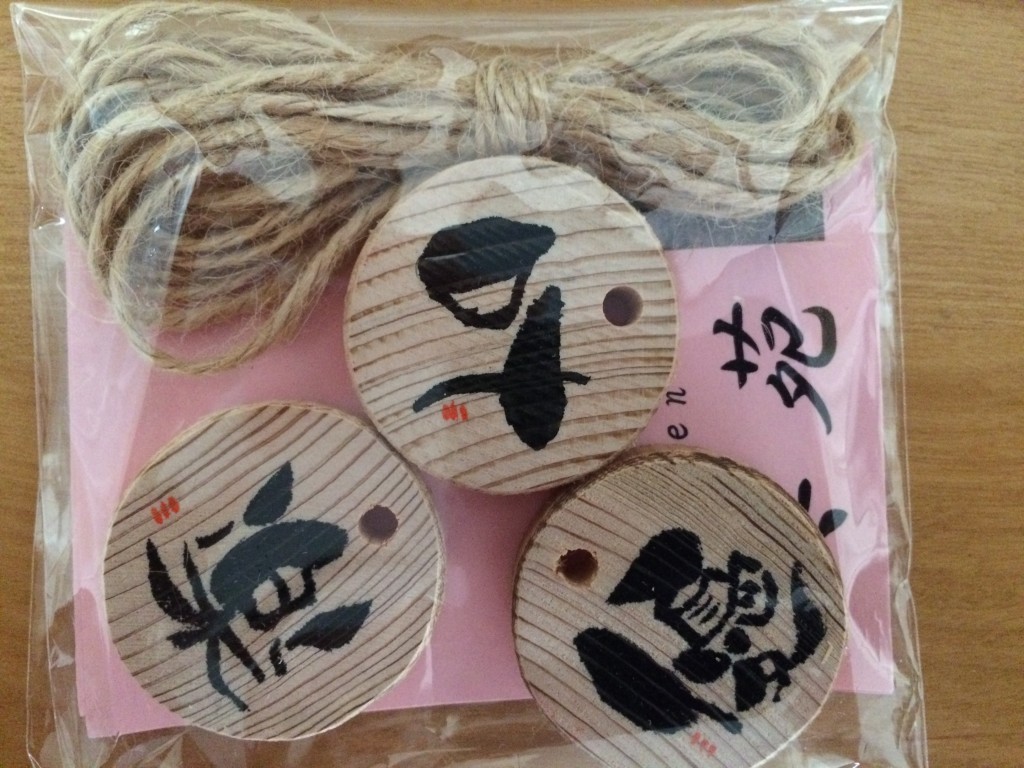 It was SO much fun participating in this day, and I still can’t believe I am so lucky. As I left the festival, I stood outside the gates and took a photo of Pennsylvania Avenue. It shows the stage where Nen Daiko performed. 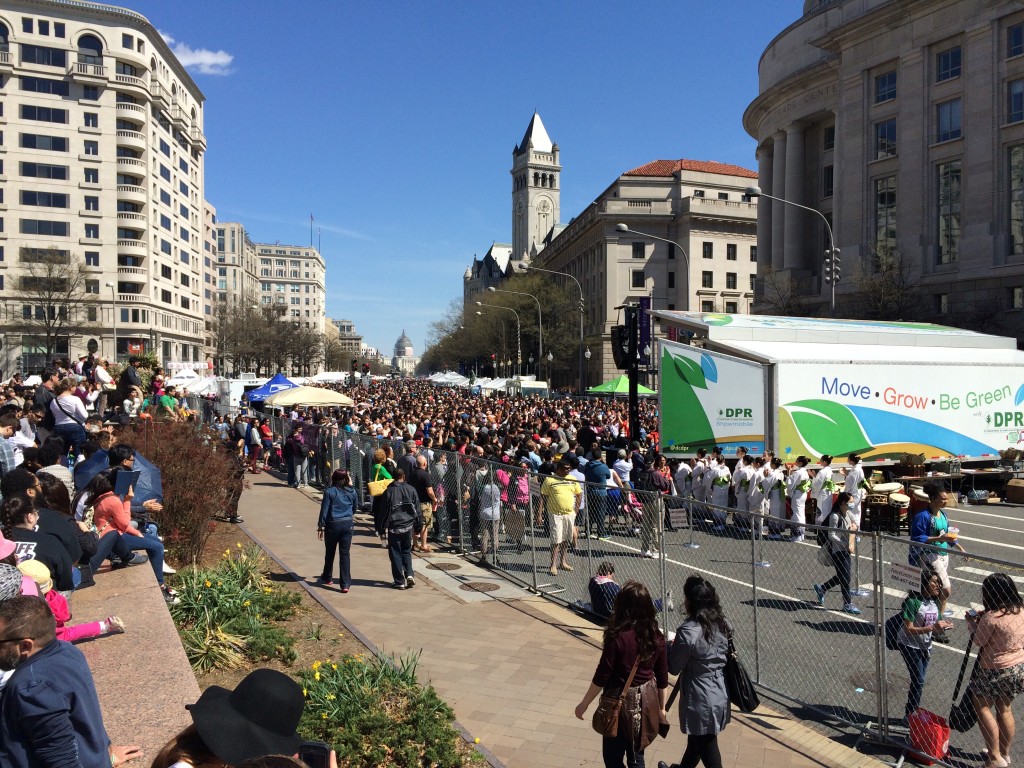 Whew! A lot of people!

Happy Spring to you all!