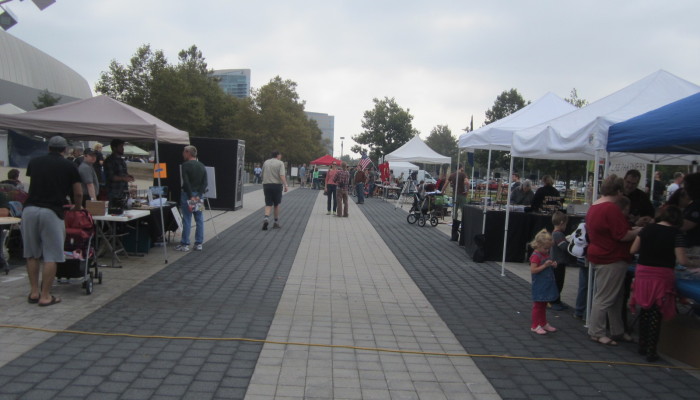 The Columbus Maker Faire was my third Maker Faire, and while it was the smallest, it had a lot of heart. Let me introduce you to 10 people who inspired me there.

A Maker Space is a business or non-profit that finds a space in the community where Makers can congregate and collaborate. Many Maker Spaces focus on collecting large tools that the average person would not be able to afford or store in their home, such as large power tools, 3-D printers, looms, kilns or other expensive equipment. In the past, community centers might have had some of these materials, but with municipal budgets getting cut, there are fewer community centers. Through membership, Maker Spaces can slowly add equipment and pay the rent.

Brian started the BuildMore Workshop as a business in May 2010. He always enjoyed his “shop” or industrial tech classes in high school. He said that while he liked building things, in particular he liked the “social aspect of building things” which is a phrase that I love. After starting BuildMore, he visited a Maker Space in California called Tech Shop, which is a Maker Space prototype that you can open in any community. It’s really part of a movement! You could see the joy in Brian’s face at the Maker Faire. This world where you bring together entrepreneurs and Makers, that’s what makes him happy.

Columbus has not just one great Maker Space, but two! The Columbus Idea Foundry tent had many great member displays, but the most busy was a pewter demonstration by Terry Griner. Terry’s pewter set-up was very cool. He took a coffee can and lined it with fireproof insulation. This allowed him to quickly melt pewter on the spot using a propane torch blowing into a hole on the side of the can.

Terry had discs of plaster available for people to carve with a small message, and then he would pour pewter over the disc to make them a small medallion. Once the medallion was cooled and removed, Terry could just shave down the plaster for the next person to do their carving. The only trick was remembering to write letters in reverse so they showed up correctly on the finished medallion.

I thought this was an extremely creative engagement activity for a Maker Faire and it was super popular. 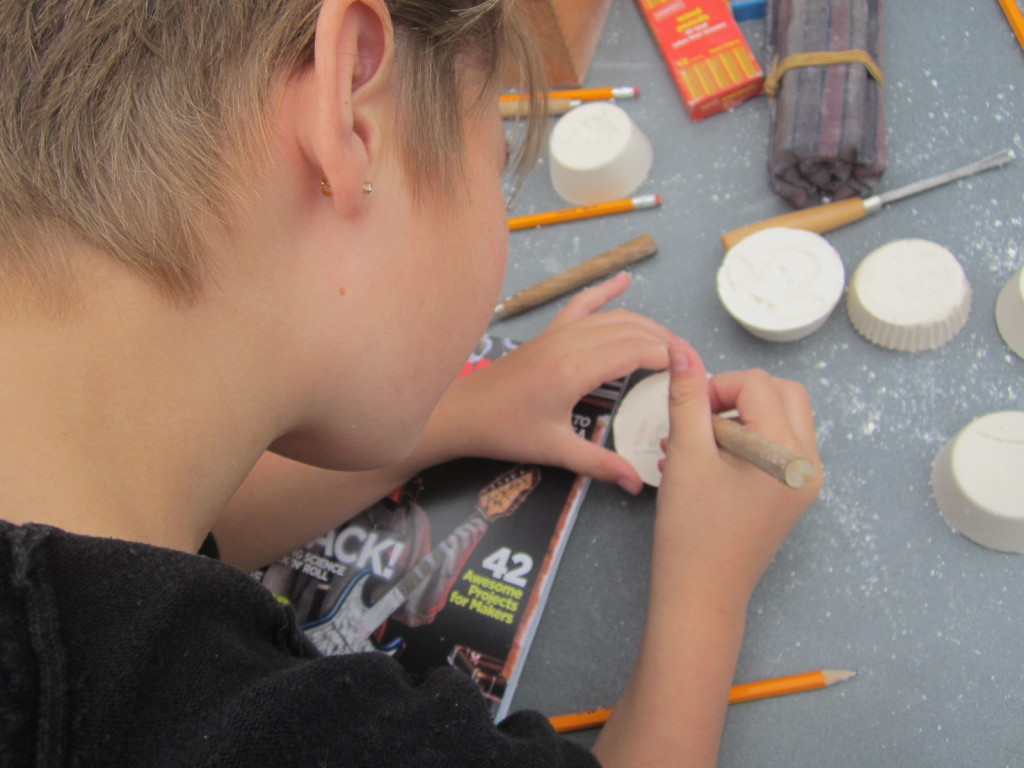 3. Joy Selby Cain, fiber artist from joy did it

Have you ever seen colorful balls of wool called “felted soap” at craft fairs? I never understood the point. I mean, who puts soap in wool? But at the Columbus Maker Faire, we had the opportunity to make our own and I think I get it now. You take the felted soap into the shower or bath, suds it up, and the wool acts as a face cloth that holds the bubbles. It’s very soft, and I could see that it could make it easier to hold on to your soap, especially for little kids. (Anyone who has given a toddler a bar of soap understands how that quickly turns into a Three Stooges’ routine.)

Joy was very keen to show us how to felt soap. Joy dyes scarves which you can see at her Etsy store, Joy Did It. She is also a member of Etsy Team Columbus which is a group of Etsy store owners who collaborate. She told me that you can create an Etsy team in any community, which was another tidbit I loved learning. 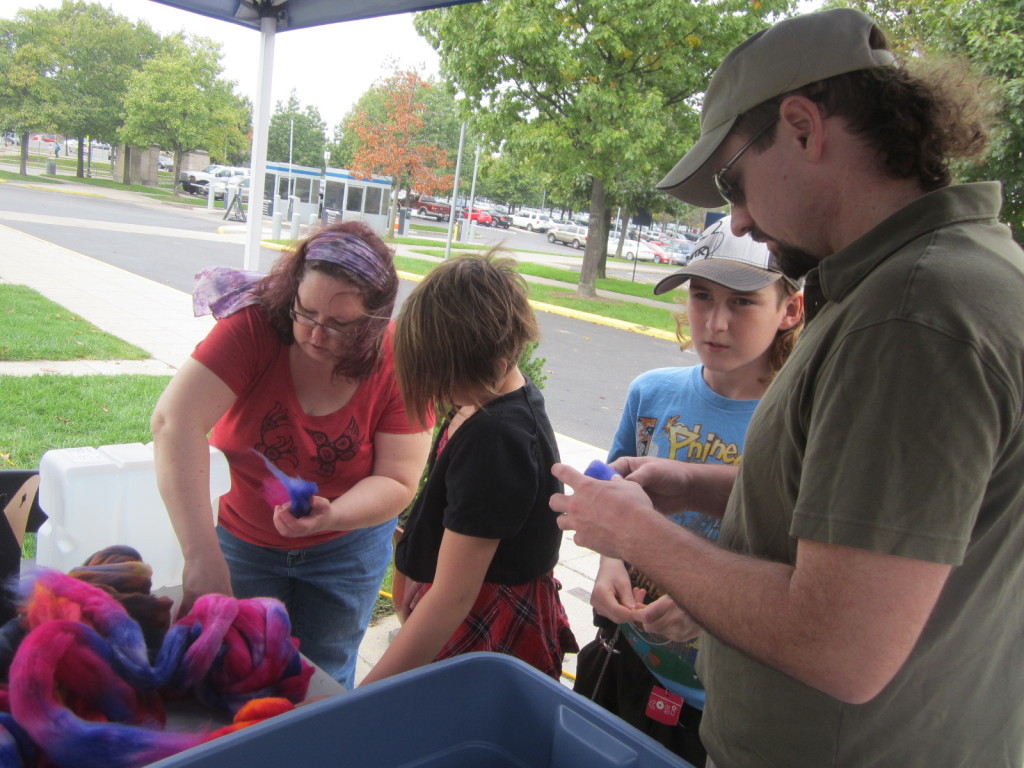 Joy had a giant pile of dyed wool in the most yummy colors. She said you can get wool for $11 a pound from Mid-States Wool Growers. (Yes, Joy is a fount of awesome fiber art information!)

Joy gave us a small bar of soap she had made and Nora picked a tuft of wool. She then got her hands wet and molded the wool around the soap. It was an easy and fun project!

Joy was not done yet though – she showed us her bicycle spinning wheel that she invented so she can get some exercise while spinning! 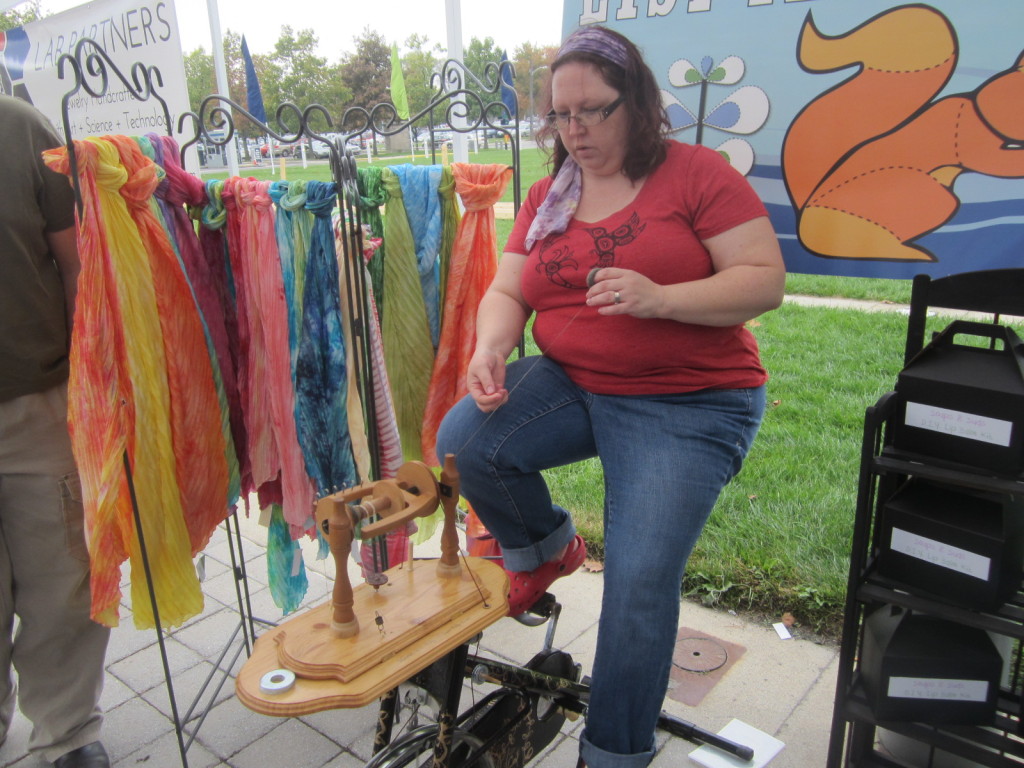 Linda was one of the artists who collaborates with other artists at the Columbus Idea Foundry. She brought glass dishes that she makes in the kiln there. She had some glass plates made from melted wine bottles, and then some other that looks like crushed glass melted together. She said that one day she was at the Columbus Idea Foundry when some folks came in with buckets filled with these pebbles of glass. They were workers who were renovating a Wendy’s restaurant (Wendy’s headquarters is in Columbus) and had lots of this glass from old booths. They wondered if anyone could use it for something. Linda was up for the challenge and made these nifty plates.

Would you imagine putting spiky metal teeth on a travel pillow? Most people would not, but aren’t they adorable? Tia uses metal spikes sometimes used to adorn leather clothing and she says it has taken quite a few prototypes to figure out how to get the teeth attached really well. The idea is that you might stash your mp3 player or other small items inside the belly of the beast, where it will be safe while you have your travel nap. Her Neckworms drew our family rapidly to her table because they were so full of personality. I liked them from a Trashmagination perspective because they are made from recycled fabric.

When my dad was a little boy, my grandmother had a camera called a Brownie. My parents recently started scanning in these priceless photos. Not many families had cameras then, so they are really special. And here’s another fun fact – my dad’s nickname is Brownie.

For all these reasons and more, I was excited to learn more about the giant black box in the middle of the Columbus Maker Faire that said “Brownie” on the side. 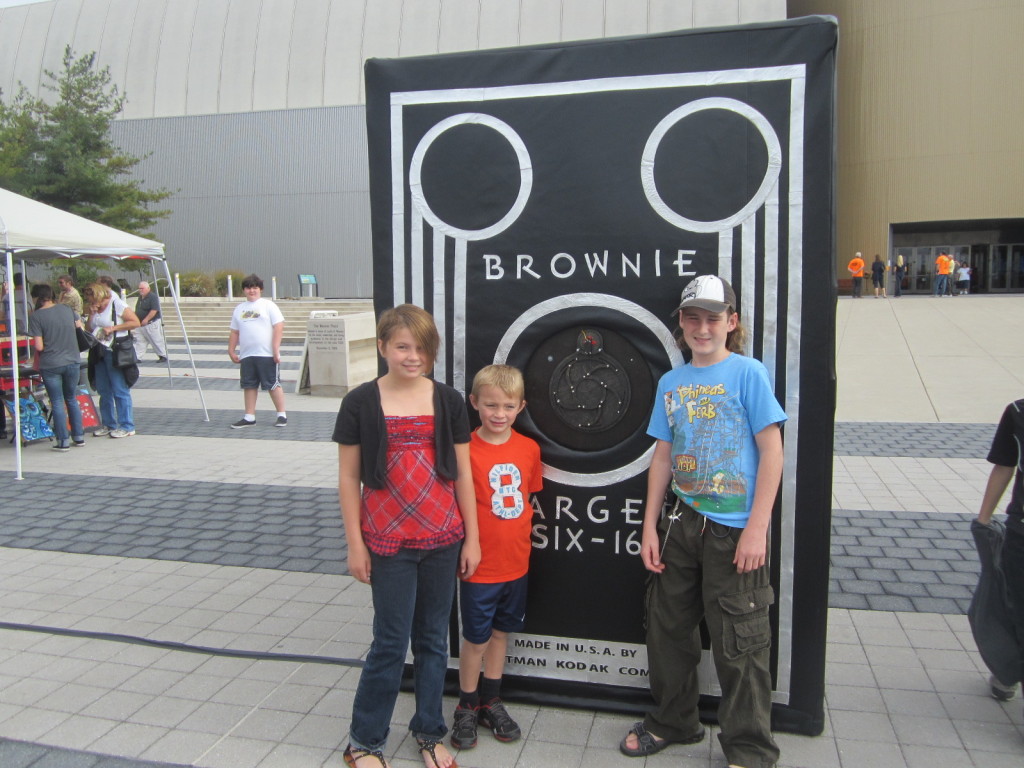 Giant replica of a Brownie camera by Stephen Takacs

When we approached this giant replica of a Brownie camera, Stephen asked us if we would like to get inside it. Of course! When we got inside, he showed us how there was a lens at one end with a sheer sheet hanging behind it. Then he closed the black fabric all around us to make it very dark inside. Soon we could see an image of what was happening outside projected on the sheet upside-down. Stephen said it would take actual photos as well. This is what you would call a “camera obscura.”

Inside the Giant Brownie Camera

Stephen is an Ohio State University department of art lecturer but he didn’t mention that when we met him. I also learned that he contributes to something called the Steam Factory which sounds like yet another type of Maker Space in Columbus. It’s a collaboration of OSU faculty, students and staff to explore STEAM (Science, Technology, Engineering, Arts and Math) which is the new education buzzword everyone is now using instead of just STEM (Science, Technology, Engineering and Math). I loved his energy and could not wait to show my dad how we got to visit inside a Brownie camera!

Kudos to the Organizers of the Columbus Maker Faire

If I ever organize a Maker Faire, I would love for it to be just like this one – especially with the power tool races! Yes, those are belt sanders on a wooden track, and you can race just about any kind of hand tool, including angle grinders, circular saws, drills, chainsaws and weed wackers. Can you say – corporate sponsorship awesomeness? Learn more about tool racing.

As always, I could have spent about six more hours meeting more inspiring folks, but it’s a delicate balance of Mommy’s passion and kids’ patience. I was thrilled to see so much and experience it with friends. I am told my passion for Trashmagination is rubbing off on their son Dominic, who made this plastic cap collection box right after our visit. Way to go, Dominic! 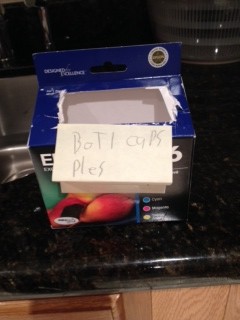