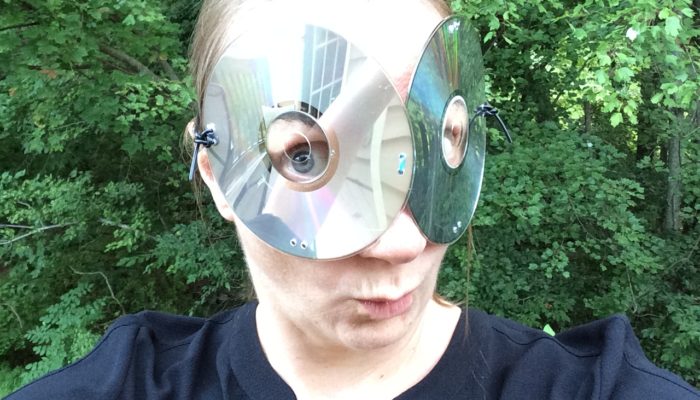 You can make mosaic tiles, toy hover crafts and hand weights from discarded CDs and DVDs, and that’s just the start of the many beautiful and useful items you can make. Let’s talk about:

There are unfortunately a lot of very ugly and non-recyclable crafts made from CDs and DVDs. So this is a good time to review my creative reuse craft rating system that evaluates whether the craft is:

My goal is to only share crafts that score well. Learn more about my creative reuse craft rating system.

For examples of CD and DVD crafts that would not score well, check out this collection of 25 crafts.

Note that many crafts that involve cutting and baking can only be done with CDs and not DVDs.

Loraine Brummer has a tutorial where she uses suncatcher paints on CDs to make little dishes with her granddaughters.

Mugsy Makes takes a stamp and ink to put designs on the CDs before she cuts them to make tiles.

Another crafter uses acrylic paint to make tiles in all sorts of colors.

The crafter Made By Fate does not remove the silver stuff, but cuts up the CDs as they are to make silver tiles.

Once the tiles are baked, they can be made into beautiful projects like this dragonfly by Ann Letelier:

Danny Seo makes a mirror tray with tiles from CDs.

Many crafters paint mandala designs on clear CDs with puffy paint and then fill in the colors with stained glass lacquer.

Crochet artists make designs that stretch over CDs and DVDs.

Making Toys from CDs and DVDs

Toy stove top – When you make a child-sized play stove from a cardboard box, CDs or DVDs can be the burners where they put their play pots and pans.

Hand weights – Danny Seo built his own set of hand weights by putting a whole bunch of CDs and DVDs on a 12 inch threaded metal pipe and securing them with ½ inch nuts.

Made from CD Jewel Cases

Many people use clear jewel cases the same way you would use picture frames.

Grid photo frames – A blogger named Trie expanded a photo to a very large size, and then cut the photo into squares the size of a jewel case. She then hung them on a wall side by side to make a huge portrait with jewel cases put together in a grid.

Handheld Maze Toy – The blogger Teri Dimalanta from Giddy Giddy designed an ingenious craft from a jewel case and the crafting supply known as Wikkistix which is a wax-covered string.

Stained glass effect on a window – The blogger Simply We attached a multi-colored jewel cases to a window with double-sided tape.

Made from CD or DVD Spindle Cases

Where to Sell or Donate Functional DVDs

Some websites pay for your DVDs if they are in good condition, such as Decluttr.com.

12 websites who pay for DVDs – recommendations from April 2018

Donate DVDs to DVDs for the Troops – Often people are serving in places where they don’t have access to Netflix but they could watch movies, so they appreciate our DVDs.

Artists Who Work with Recycled CDs and DVDs

Sean Avery builds elaborate animal sculptures by cutting up CDs and DVDs. (In the podcast episode I said he was British but he is Australian! How embarrassing! Sorry Sean!

Mirco Pagano and Moreno De Turco make portraits of famous musicians such as Bob Marley, Elvis Presley and Michael Jackson by laying out the CDs on a flat surface.

Bruce Munro does installations with thousands of CDs, such as Waterlilies.

Belèn Hermosa designed a chair made from 4,000 CDs

Vanessa Silva makes jewelry using those techniques I described about baking the CDs.

The only craft I made from CDs so far has been a dress. I was participating in a contest with friends called GISH or the Greatest International Scavenger Hunt which involves doing a whole bunch of stunts and photographing them. The challenge I was doing involved making a dress from e-waste and then taking my photo as if I was a mannequin in a shop window. So I punch a bunch of holes in some old CDs and then tied them together with twist ties. I made a neckpiece from some coaxial cable. I went to my local Ann Taylor store which was the only one nearby that had mannequins in a shop window and asked the people working there if I could take my photo wearing this dress in the shop window. It was a quiet day and they got a real kick out of it.

I’m still looking for broken or unwanted tents if you’d like to give them to me!