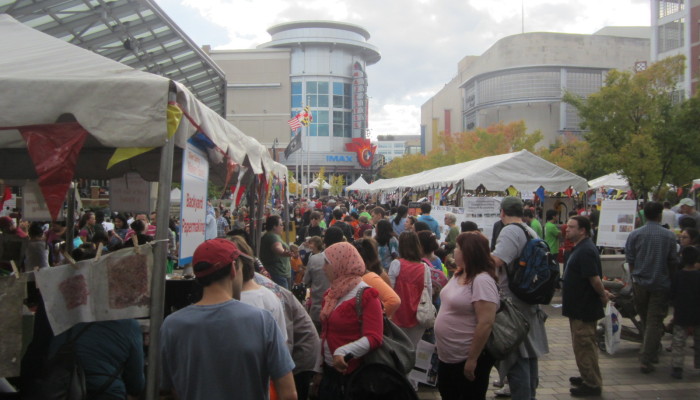 After our recent experience at the World Maker Faire in New York, I was quite excited to see a local Maker Faire, the first one in the Washington DC area. It was called the Silver Spring Mini Maker Faire in Maryland.

The layout of the Maker Faire was great, in a central square of Silver Spring. It was packed with people, but since I didn’t have to keep an eye on any kids, I could literally squeeze into any cranny to see everything I wanted, and then move as quickly as I wanted to the next thing.

There were a large number of projects from students and faculty at the University of Maryland, as well as from NASA, since both have offices relatively nearby.

I was instantly drawn to this project because it was a combination of sewing and electronics. The idea was to teach about how your body looks inside. It can be set up to monitor and display your heart beat. It was made by students at the University of Maryland in their Makeability Lab and the Human-Computer Interaction Lab. This video explains how the BioVis works.

One thing I really admired about this Maker Faire was the diversity of activities people could do that were not all about programming a robot. I admired the mosaic being built by people as they passed by. 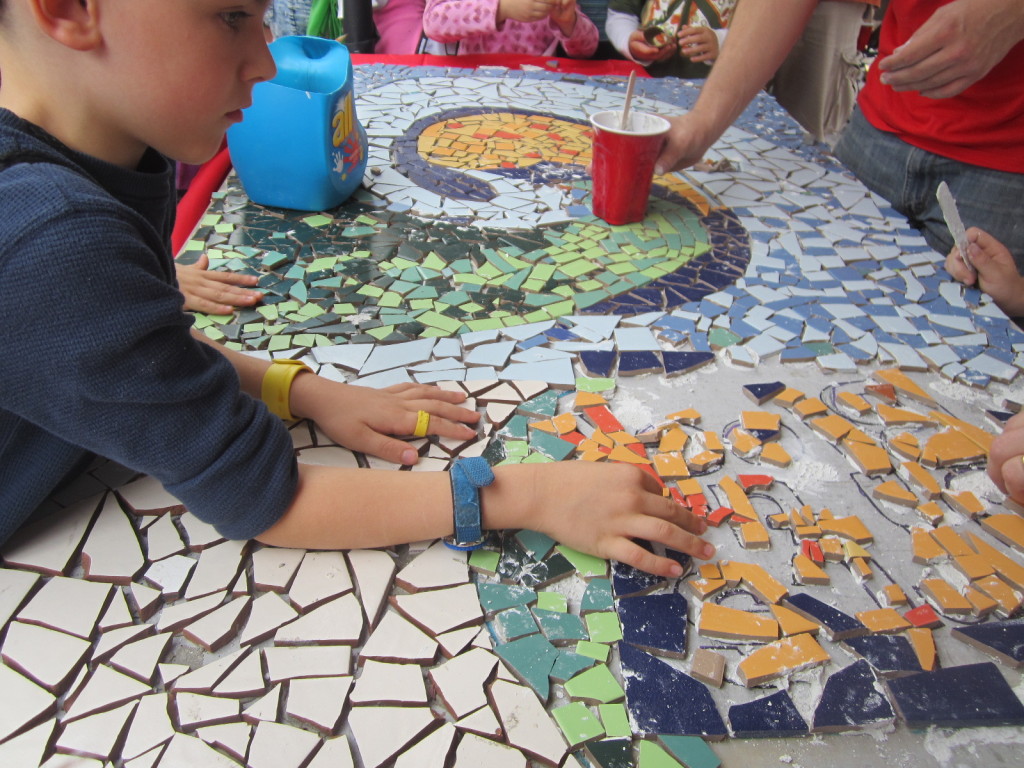 Making a mosaic at the Silver Spring Maker Faire

I also liked the wind tunnels that had been built with an industrial fan and a tall tube. People were building all sorts of structures from cardboard and paper, then releasing them into the wind tunnels to see what would fly well. That wooden structure above the fan should definitely be copied for other events. 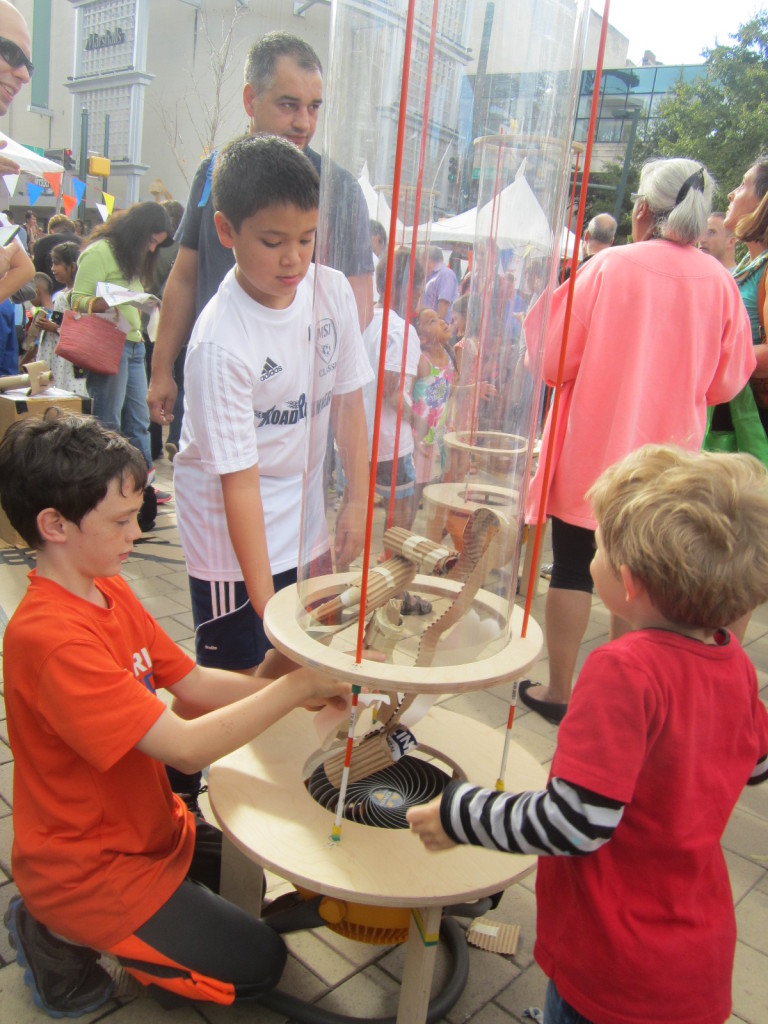 There was a whole “take-apart” area where people with screwdrivers were actively taking apart just random everything and then putting it together into sculptures of some kind.

Some local high school students showed kids that if they got corn starch packing peanuts wet, they could stick together into sculptures. 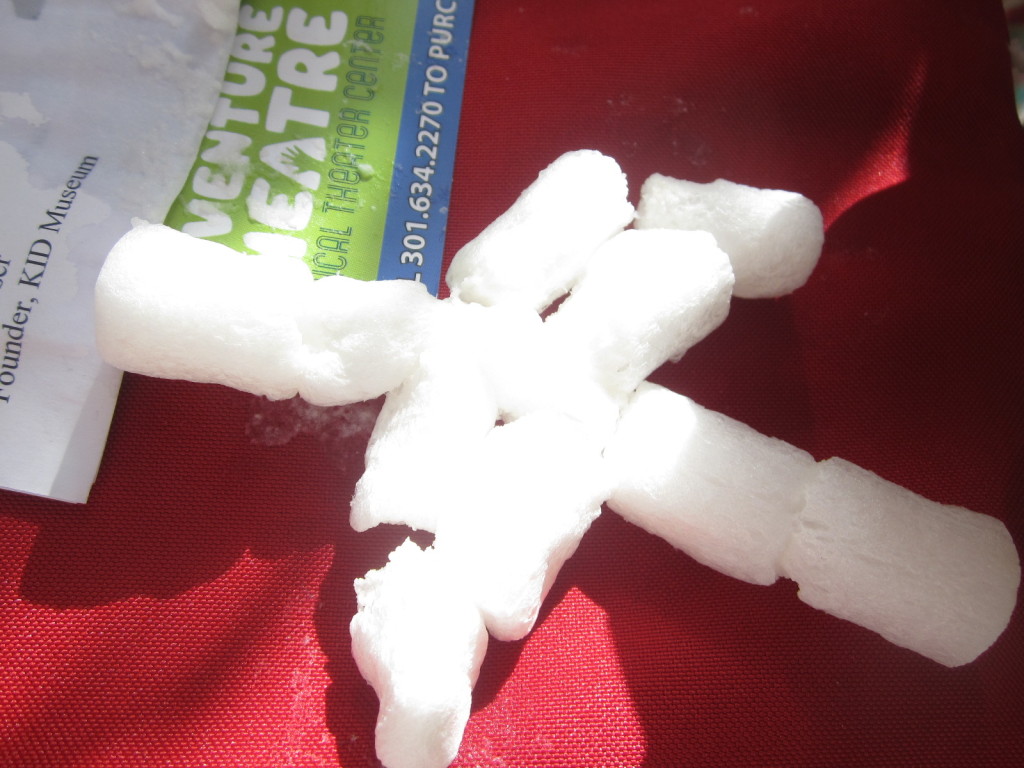 People had lots of fun building complex marble runs on vertical pieces of peg board. Adding rugs on the ground below the peg boards was very smart to keep things from rolling away and to save people’s knees. 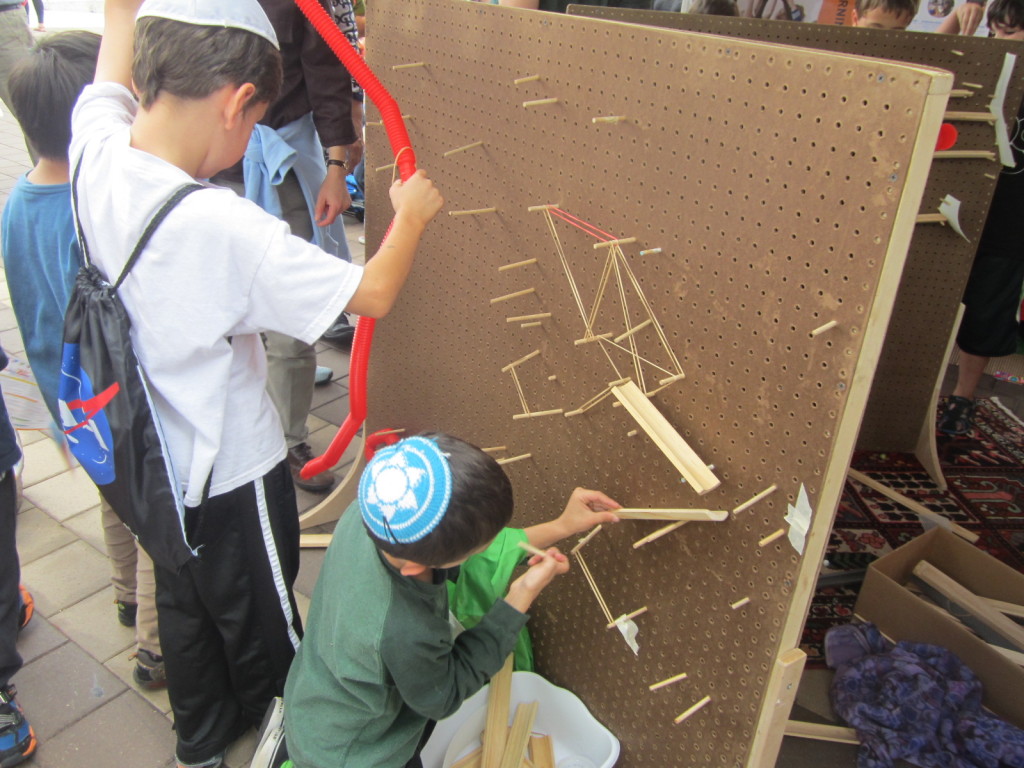 Marble run made from a pegboard, pegs, bamboo, tubes and rubber bands

People were encouraged to draw a star for a project called Blanket of Stars. Some folks are fundraising to open a new children’s museum called KID Museum, and they want this to be a display in that new museum. They had the people draw it so the images were in something like slideshow slides, and they intend to shine an LED light threw them somehow? I personally liked their display for the finished slides. 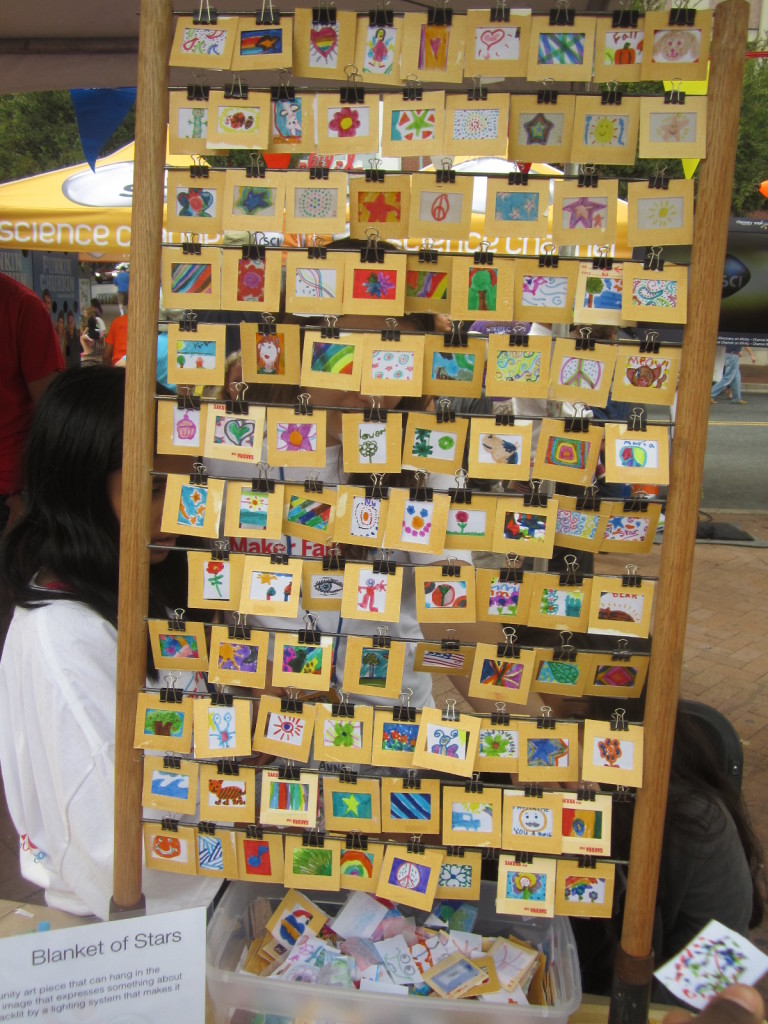 They were giving classes on how to make things from liquid rubber with molds. Here you can see he is holding the jar of liquid rubber up high – he said that reduces the bubbles in the finished product. 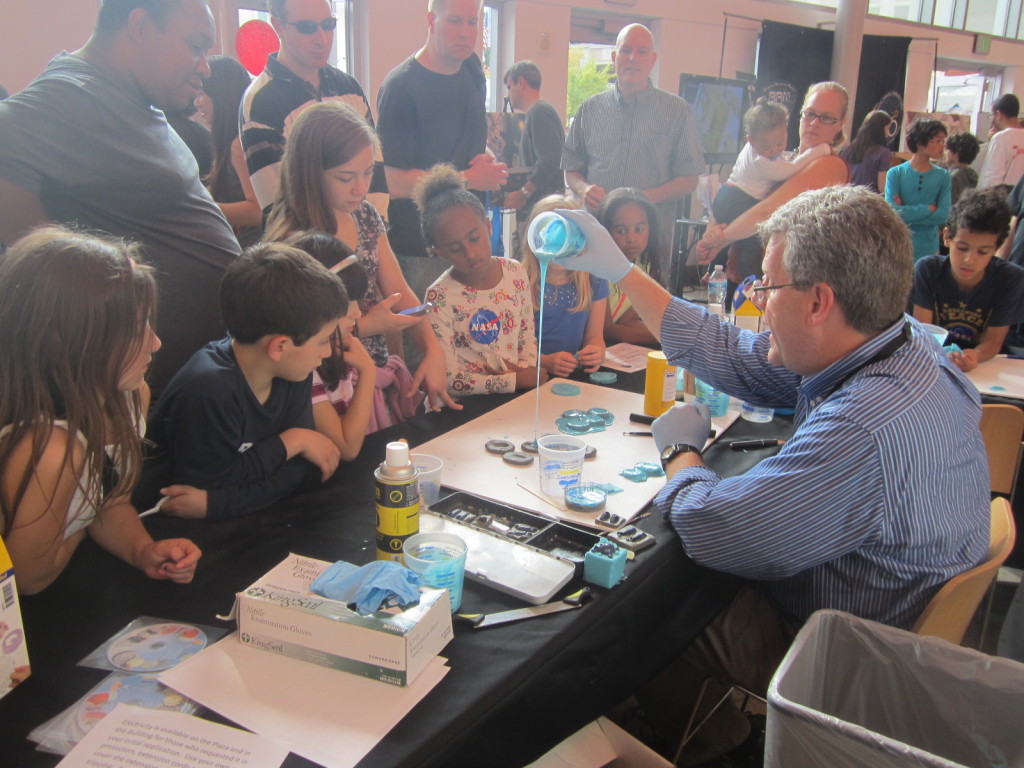 Finally, here’s something that made me jump up and down with happiness. One of the event sponsors was The Blairs, a series of apartment complexes in Maryland. At those apartments, they offer tiny small libraries of free books outside where people can just walk up and take a book or leave a book. Just a few days ago, I read a story in the Washington Post about this growing national trend of Little Free Libraries. You can visit the website Little Free Library to see where they exist and order your own kit or finished library box. The most inexpensive one is listed as a few hundred dollars. I’m wondering if I could convince my homeowner’s association to let me put one up in a nice shared location, but somewhere where there is enough foot traffic so it doesn’t get damaged – perhaps by the mailboxes? 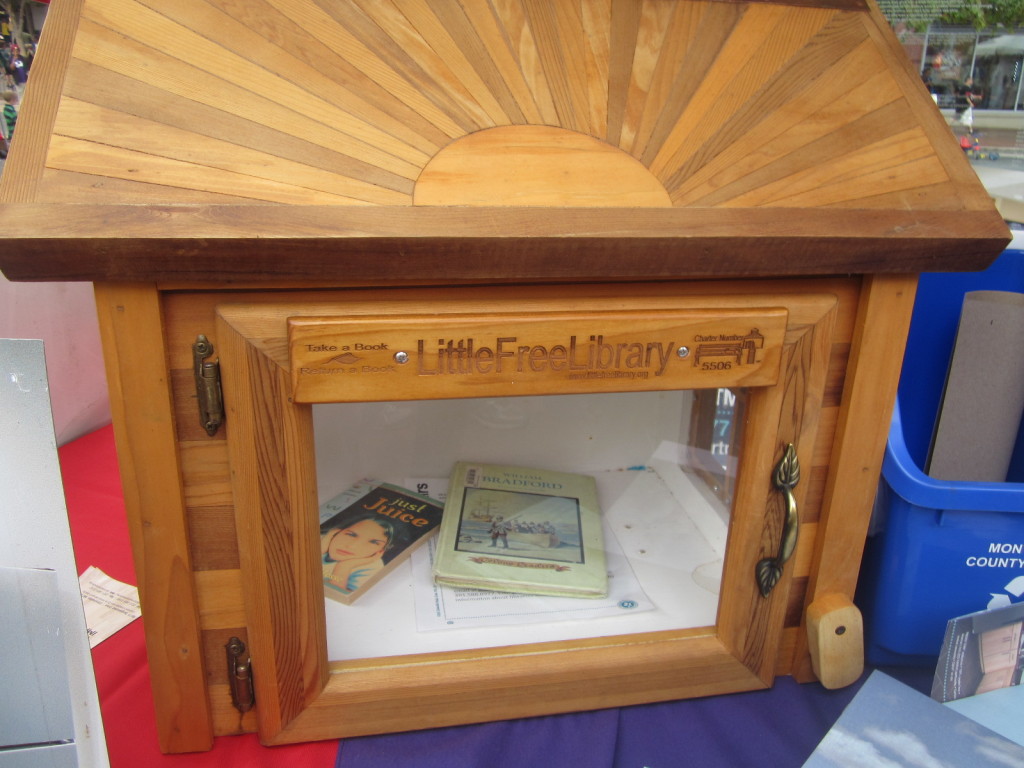 Think Outside the Store

One table I really wanted to see was from the store called “Think Outside the Store” that takes secondhand clothing and refurbishes them. They also offer sewing classes to kids and adults. They were helping people make random little things from cut up t-shirts, like hair bands etc. I had missed the trash fashion show due to our traffic fun. It was great to see this store at the event. 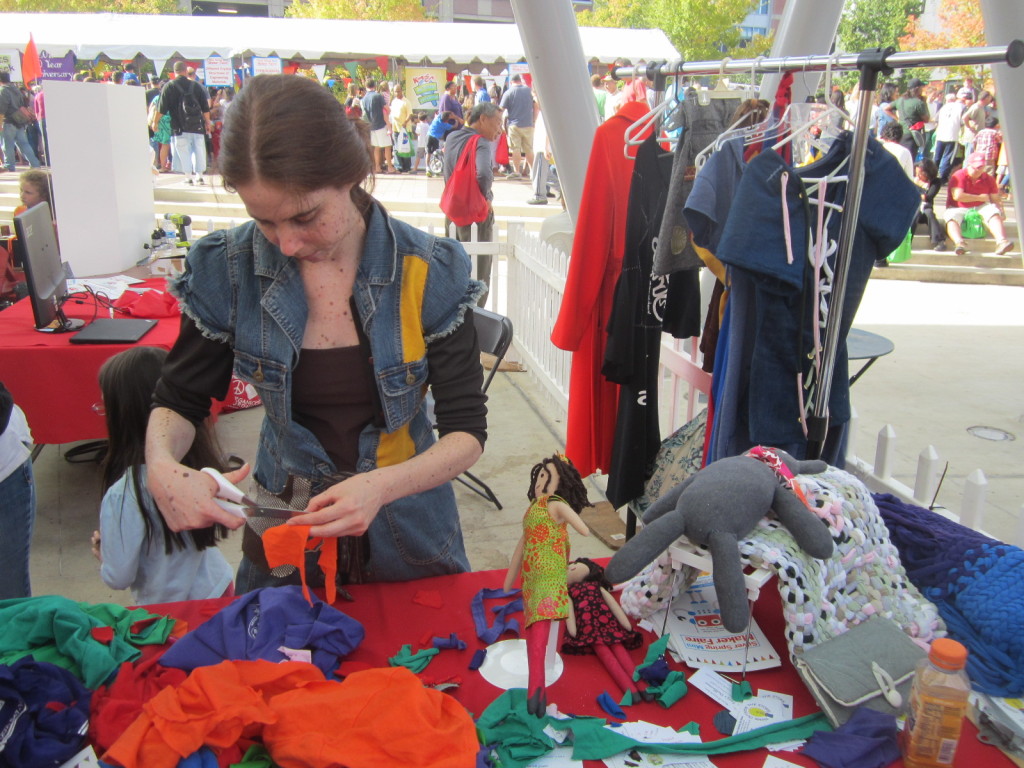 Think Outside the Store at Silver Spring Maker Faire

It was great to see a local Maker Faire, even if I was there for less than an hour! Check out more photos from the Silver Spring Mini Maker Faire on Flickr.