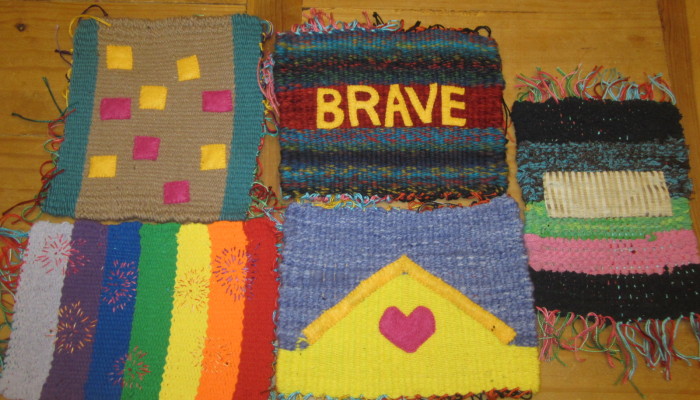 Earlier this year, I worked on my Weaving a Life certification. My final project for that certification is a series of 10 blocks that represent golden moments in my life, which I then connect together in some ingenious way (which is yet to be determined).

You can read about the first three completed golden moments blocks in this blog. Since then, I have completed five more blocks – two more to go!

Crazy as a Loom Block

A few days ago, I wrote about my visit to Crazy as a Loom weaving studio, and the impact it had on my life. The block that I wove for this memory was made by cutting up old socks with holes in them, and making loops just like Hilary Cooper-Kenny does. The socks had a lot of elastic in them, so this block is a bit irregular. But on the positive side, it took almost no time to weave. I can see why Hilary likes weaving with them.

I added this image of the reed in the center. The reed is part of the loom that keeps the warp even. It sits in the beater, which you use to push each row of weft into place. The reed is a symbol for me of having faith that things will work out. It will ensure that things land where they should. If I pull too hard, because I want a certain outcome, chances are that things will get misshapen. Nope – it’s about having faith that if I pull with a reasonable force, it will be what it needs to be. 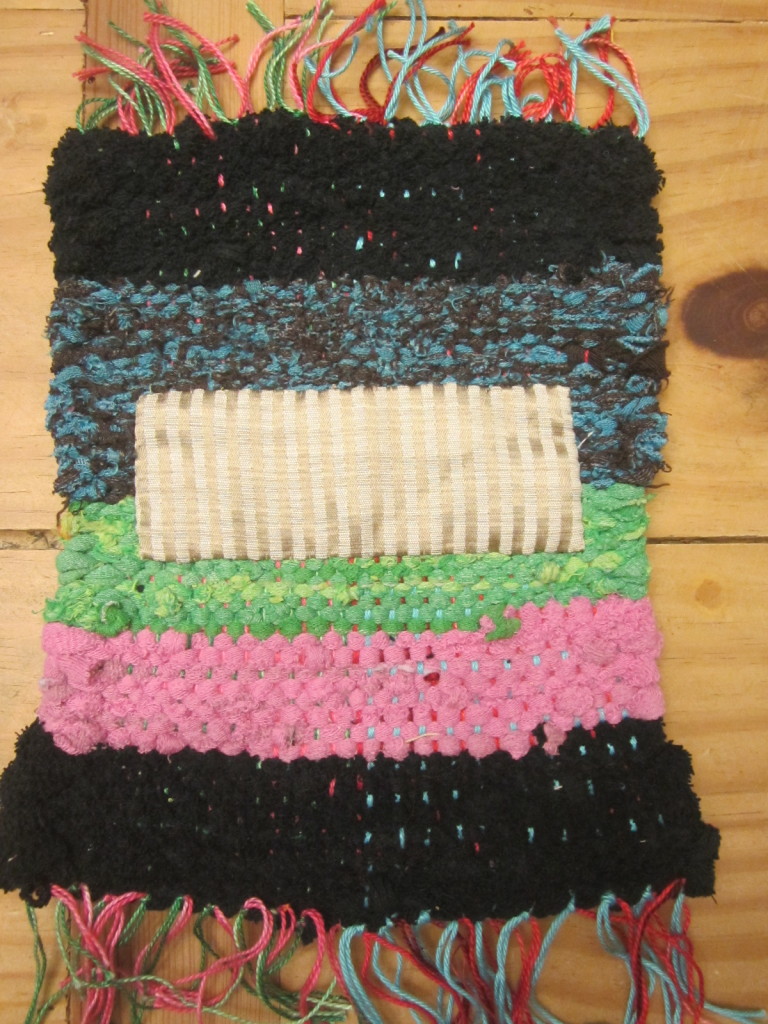 Crazy as a Loom memories for my Golden Moments weaving project

When I was in elementary school, we had a librarian named Mrs. Mitten. She was a wonderful librarian and she also did something very magical outside the library. She lead our school dance club. Almost every child was in the dance club. She would take popular music and choreograph wonderful dance routines that we would perform. Whenever I hear songs from that time, I am transported back to the Liverpool Street School Dance Club. My favorite routine was to The Rose by Bette Midler where the dancers got to wear roses on their wrist. I was not chosen to be in that dance, but I thought it was exquisite, as well as the one to Chariots of Fire.

When my family moved to Nova Scotia, I was going into grade 8, and I was very angry with my parents for moving. For the first year, I was very sad. In grade 9, my sister Tracy came to junior high school, and we started a dance club. We would choreograph the dances. It was a very popular club, and amazingly run by students instead of teachers. This seems unbelievable, but the teachers even asked me to give the students who participated a mark out of twenty that would count as 20% of their music grade.

My sister and I loved choreographing the songs. One of my favorite songs was True Colors by Cyndi Lauper. For that song, we had all the dancers hold flashlights and we put colorful tissue paper “flames” coming out of the flashlights. We performed the song in the dark. This block shows the lights shining in the dark (those little fireworks stitches).

When I was pursuing another dream, to attend Lester B. Pearson College of the Pacific, I remember how nervous I was sitting in the waiting room with the other applicants. Everyone looked so confident. One girl was even holding sheet music for something she had composed? In one of my interviews, I was asked, “What is the most beautiful thing you have ever made?” My answer was the dance club and I described how leading the dance club allowed me to pull happiness from my previous home into my new home. When I answered that question, I felt like I might just have a chance at that scholarship because I realized that I had the tools to build community no matter where I went.

This block represents how much I love choreographing dance routines to songs. I still do it in my head all the time. It also represents doing stuff because it feels wonderful, even if it seems like something you might not attempt. 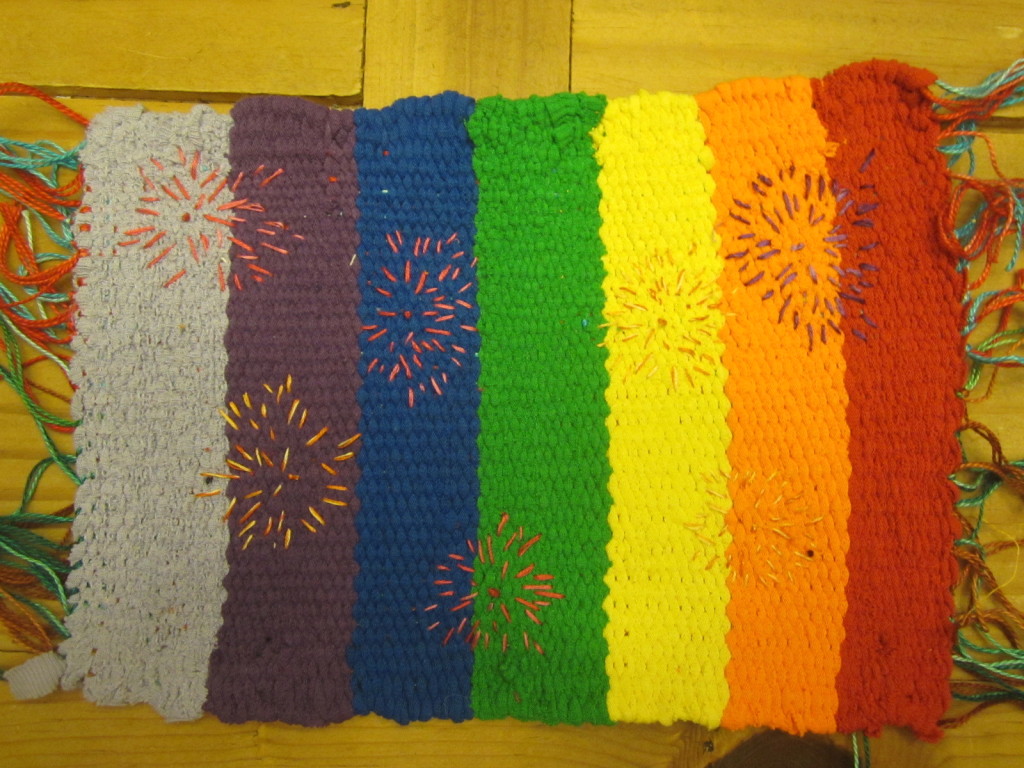 This block represents a specific moment when I realized that I loved organizing people and tasks. I was 15 years old, and volunteering with the Youth Leadership Council. We were facilitating events for new students starting university as part of their orientation. We did not have computers, but we were putting on a rather complicated series of events. Each day, team members might need to be in different places.

I took a brown paper bag and opened in flat. I drew columns to represent the various locations around our event site, and the time of day down the left. Then I noted which team member would be in which place each day. I took baggies and filled them with everything they needed to do their jobs. Then the next day, I would cut small pieces of paper (we didn’t have stickie notes yet) and taped the changes on the schedule.

I don’t remember how this became my job. I just remember that I loved it, and wanted to keep doing it forever. I loved having my team come to the schedule to get their responsibilities and tools. I loved changing the schedule based on their feedback.

Throughout my career, I have made similar dashboards for so many teams. Even when we had much more sophisticated tools available, I can tell you that the power of something large and colorful has pulled my teams through very complicated projects. I may keep a project management file in my computer, but whenever something is more creative or murky, people love the colorful papers. They can move them. They look forward to moving them.

When I took a course in Agile Project Management, they talked about how you build the “story” of a project with tasks that are blocks, like these pieces of paper. The “Project Owner,” or the person who makes decisions about resources, is more able to make good resource decisions when they can see the story clearly. My role, the “Scrum Master,” is to make that story clear so they can respond with the best information. This format is core to my being. 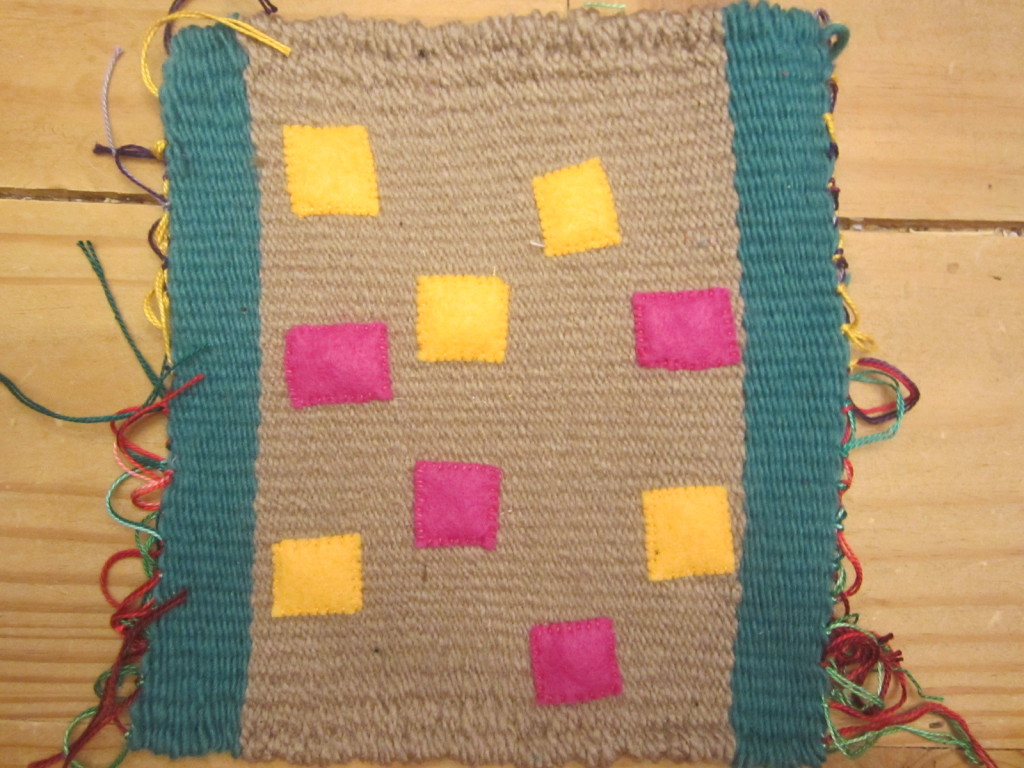 This block shows my tent which had a yellow fly. When Bob and I were falling in love, we loved camping in it. It gave us an opportunity to get away from the world and be just the two of us.

Bob had not camped before he met me. Every camping skill was new to him. I had been a Girl Guide and had earned my Duke of Edinburgh Gold Award, so I had a lot of camping experience. I loved showing him how to put up a tent, build a fire and cook a meal outdoors. He was so excited to learn each thing.

Camping makes the every day feel new again even if you have camped a lot. It reminds you that you take things for granted like electricity, running water and mattresses. It makes you focus on the essentials. The sounds of sleeping in the forest, the stars if you are camping far from a city, the way food tastes cooked in a fire – all your senses come alive. Combine that with the feeling of falling in love, which also makes the world new again, and you have a whirlwind of sensations. 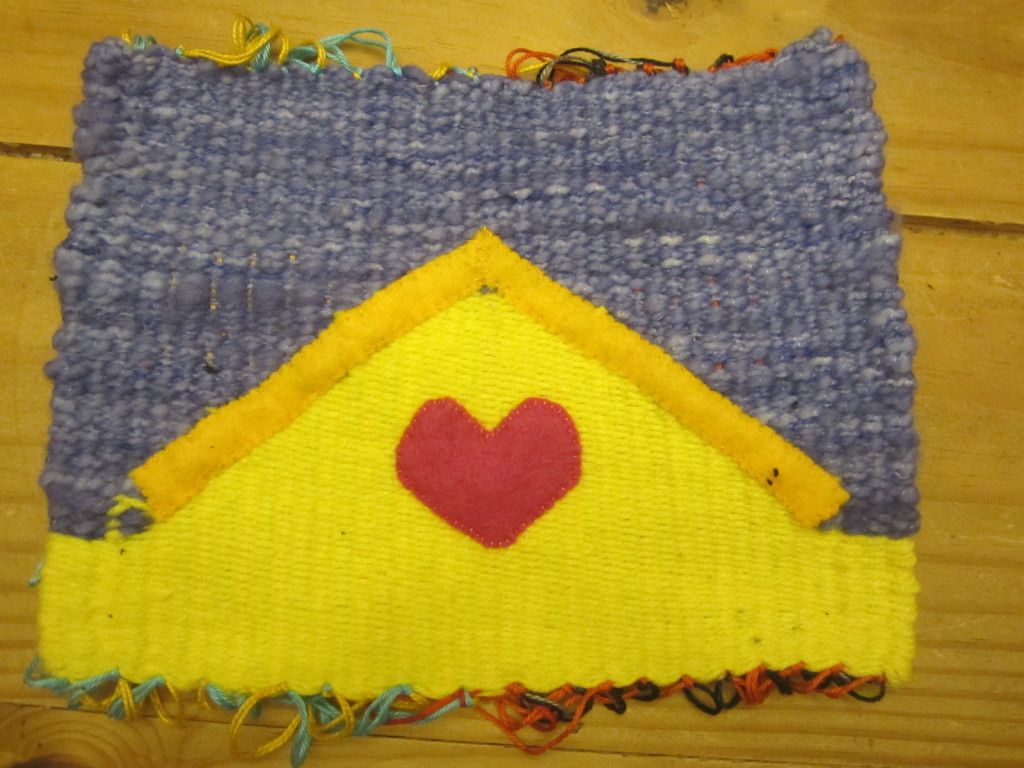 Falling in love for my Golden Moments weaving project

In 2010, Doug Hall from Eureka! Ranch came to my work and he invited 16 people to come learn about Innovation Engineering. I applied and was chosen. We all flew to Cincinnati to visit Eureka! Ranch. I had done a lot of research to prepare for our topic, which was getting kids outside more. For example, I had interviewed more than twenty families about the challenges and joys of spending time outside with kids. Despite all my preparation, I was very nervous. Something told me this was going to be very important to my future.

When I experienced the Create Session, I loved every moment, how it stretched my brain. We were taught how to prepare a “pitch” which was to sell an idea to our team members. The initial feedback I received about my idea was not positive. I felt frustrated. I tried to change directions and choose a new idea, but I could not get off that original idea. I decided I just would not pitch. That evening, at a bar in the hotel, my colleagues kept telling me that I should pitch something. With their encouragement, I gave it a try at the bar, and the other folks in the bar joined in. They made me feel brave.

The next day, I was again hesitant to do it, but finally gave it a go. I really put it all out there. Doug told me it was the most passionate pitch he had ever seen. It was one of the most exhilarating moments of my life.

I still don’t know where Innovation Engineering will lead me, but I still love it, and I am now starting a company where I coach people using these methods. I am aiming to be brave again, even if it seems incredible that I could do it. I love how vibrant the colors turned out in this block, from the variegated yarn. 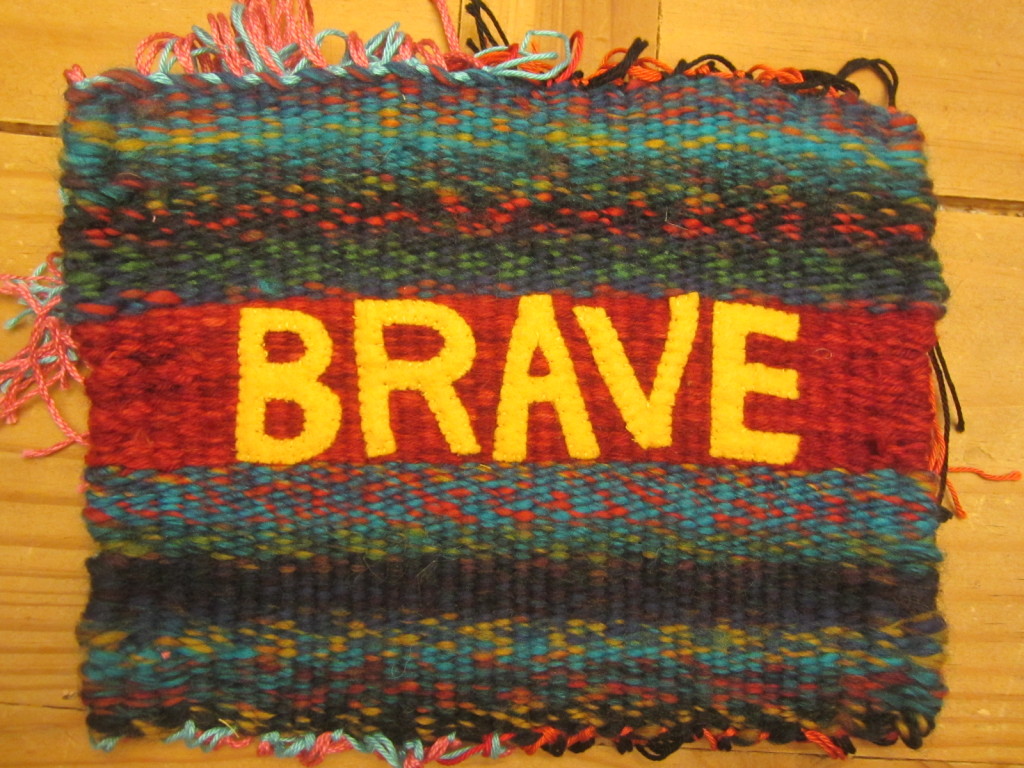