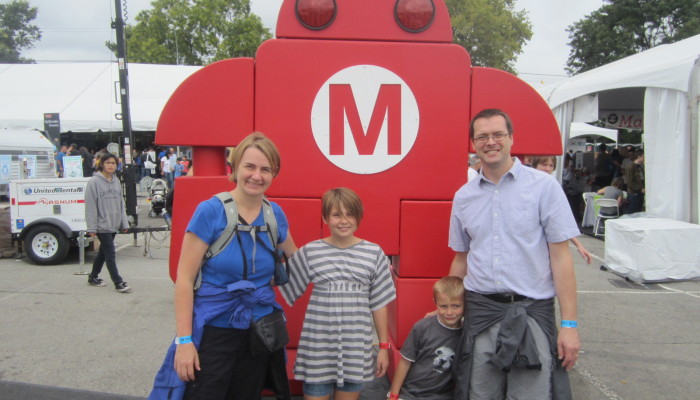 On my Trashmagination About page, you’ll see that I self-identify as a Maker. When I wrote that page, I had only a vague understanding of the Maker movement that is now underway. I had heard of a Maker Faire but never attended one. So when I found out that one of the World Maker Faires was coming to New York, only a half-day drive from me, I got my family excited to attend.

What is a Maker Faire?

A Maker Faire is like a giant show-and-tell session. Passionate people who have figured out all sorts of quirky things come together to share. There are World Maker Faires, like the one we attended in New York, and there are Mini-Maker Faires, which happen in communities anywhere in the world. The Maker Faire model is growing rapidly to hundreds of events per year.

Some people might say that the Maker movement is growing as a reaction to how much of our lives is now virtualized. Others would say it is because our education system is not teaching our kids how to make anything. I am interested in the Maker movement because I think we consume mindlessly when we do not understand what goes into the materials around us. I want people to make things so they appreciate the costs – both in human creativity and natural resources – in everything they touch.

Despite those very serious goals, what I have learned from attending my first Maker Faire is that the foundation of the Maker movement is fun, play, surprise, joy, sharing, love. The rising tide floats all boats. It’s about people who want to make the world better, for the most part, by sharing something they have figured out.

In a video on the Maker Faire site, the speaker notes that when you leave a Maker Faire, you often feel optimistic. You feel like you could do things. It is that heartbeat that I admire. It is also my life mission that people should feel creatively inspired to do amazing things.

Top Five Things I Wanted to See at Maker Faire

I spent probably five hours studying the Maker Faire schedule and website before we left. I knew the event would be overwhelming when we arrived, so I wanted to have as clear a picture in my mind beforehand, to help sift through the reality of it. I made a list of the things I most wanted to see, and I saw many of them. 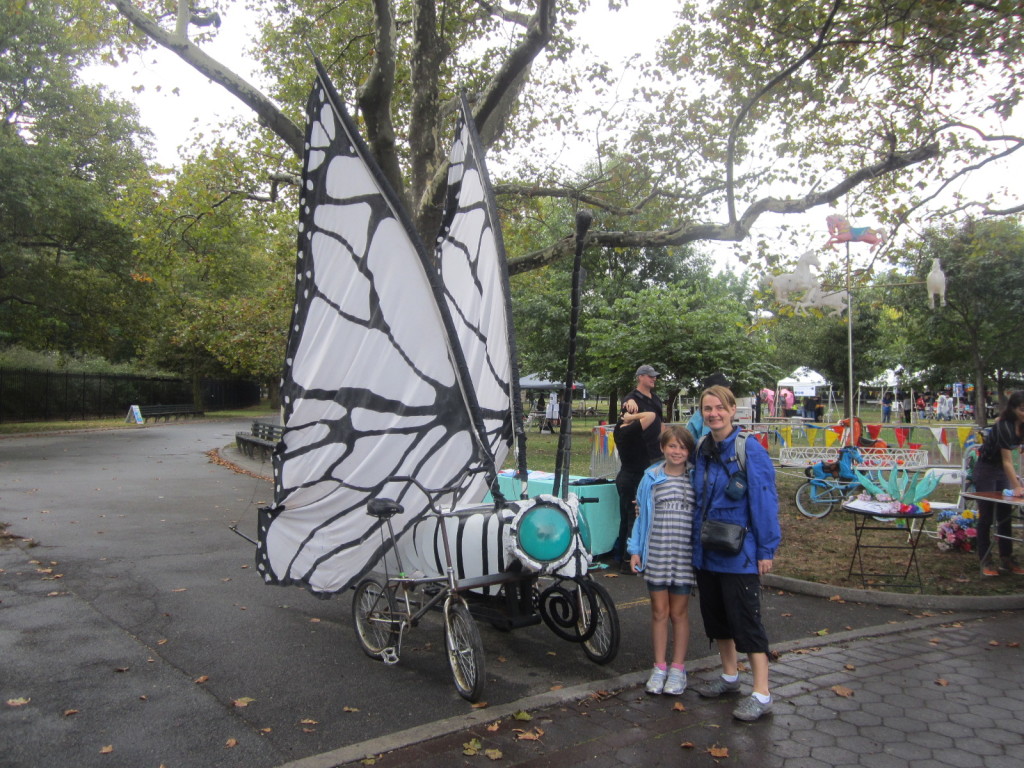 As soon as I read about this group, it was my number one priority to see. And luckily it was one of the first things we saw! Even more amazing, Nora got to ride one of the bicycle butterflies:

I really admire the Austin Bike Zoo on so many levels. The art is beautiful and magical. The people who ride feel beautiful and magical. It’s a simple idea elegantly built. It reminds people about nature with their whole bodies. Watching the Austin Bike Zoo makes me want to learn how to solder things together and sew giant wings. It takes me back to childhood when you first looked at the flying machine drawings by Leonardo da Vinci and thought, “Yes, that makes sense. We should build things like this.”

I strongly recommend you visit the Austin Bike Zoo website to see the videos about the giant glow-in-the-dark snake they have built where six bicycles can make it squiggle down the road.

RePlayGround is a blog I follow written by Tiffany and other “design junkies” at Terracycle. Terracycle is a company that is working to eliminate the idea of waste. I am a HUGE fan of Terracycle and Tiffany. They are constantly developing new products that use packaging, and then they get companies to sponsor schools and non-profits to gather those packages. Tiffany was scheduled to lecture at 11am in Maker Square, so I was pretty intent on getting there. She was demonstrating how to make a lamp shade from old film (like movie or camera film).

Anyone who has attended a gigantic event with children knows that you can only steer them so far or so fast, so I tried to keep my expectations low on which lectures I would see. Luckily, right beside Tiffany’s lecture was the table for the School of Visual Arts, filled with inventions that Nora wanted to examine in detail. So I got to see most of Tiffany’s presentation. 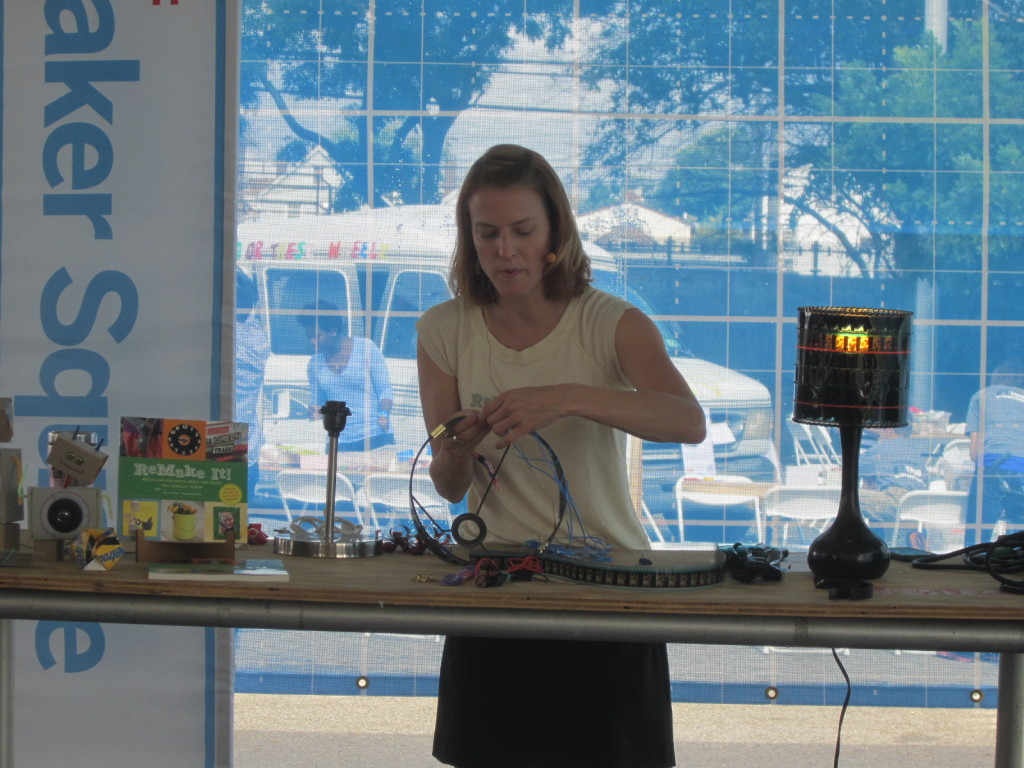 Tiffany Threadgould from Terracycle demonstrates making a lampshade from film

I was too shy to introduce myself – maybe some day. Maybe when we are co-presenting at a future Maker Faire :).

As I mentioned earlier, with kids, you don’t get to see everything you want to see. There was a trash fashion show at 3pm at the Swap-o-Rama-Rama, which was an area where people were doing a clothing exchange as well as upcycling by altering the clothing. I did not get much time here, which made me sad, but I could not get either kid interested long enough in something so I could look away.

But I did get to visit a trash fashion booth in the Maker Shed. I don’t even know which group put it together, but it was an area filled with mostly dresses made from trash. There were many lovely designs including a black dress covered with gold keys, a dress made from postal packaging and a red and white number made from Skittles wrappers.

We also got to talk with some students from the High School of Fashion Industries (New York has the most amazing schools) who were wearing some of their sustainable designs made from upcycled clothing. 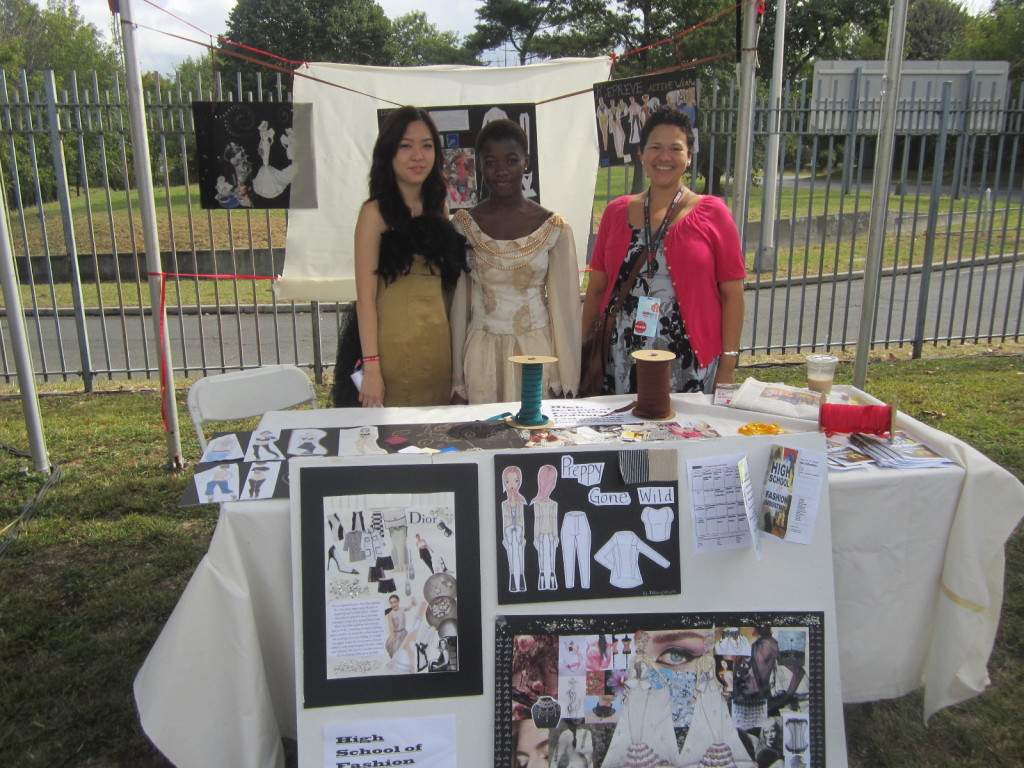 You might remember making woven “potholders” when you were a kid on a small loom. This was a version as big as me. There was no one around when I visited the loom, but I still totally want to make one. 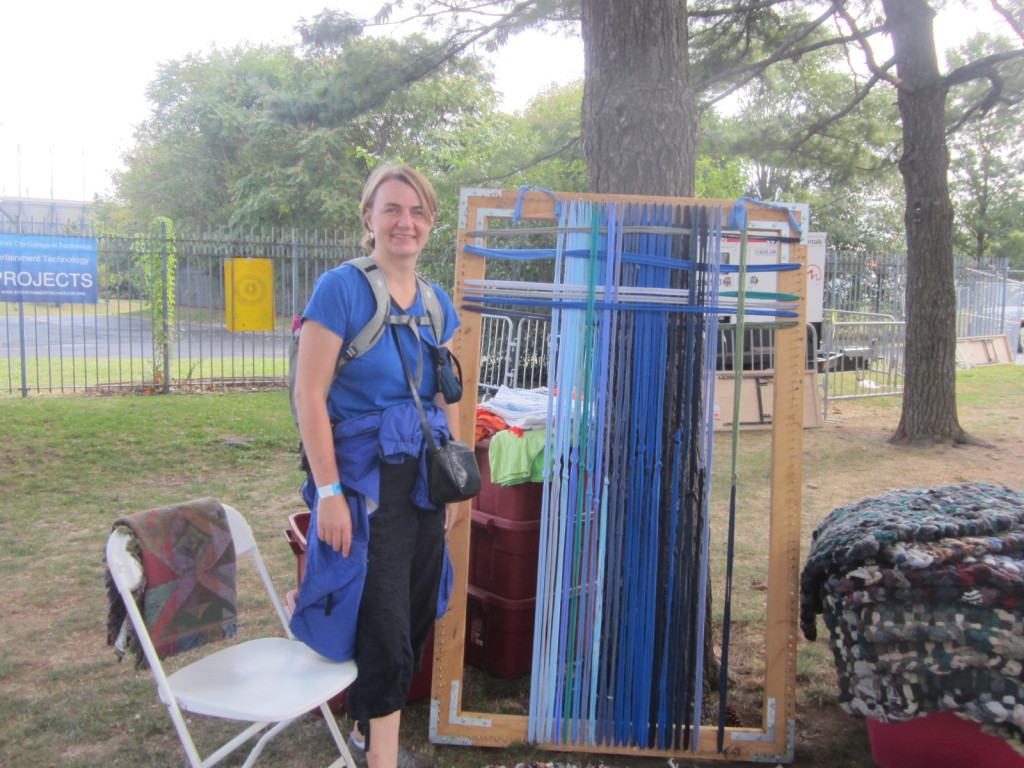 My favorite recycled instrument maker is still Zeke Leonard and Salt City Found Object Instrument Works. Don’t worry Zeke, you are still #1. However, I also got to see a whole bunch of other recycled instrument makers. We did not get to see any of the concerts because they took place after 6pm and my family only lasted until 4pm before totally running out of steam. I would have LOVED to see Bash the Trash or Glank.

But we did get to play with instruments made by Eric Farber in his display called Kinetic Ontology. This included a xylophone that pops out of a suitcase called Batterie-en-Valise and a variety of instruments that play when you turn a crank. There was even an instrument made from an old pedal foot Singer sewing machine like the one my grandmother used to have. 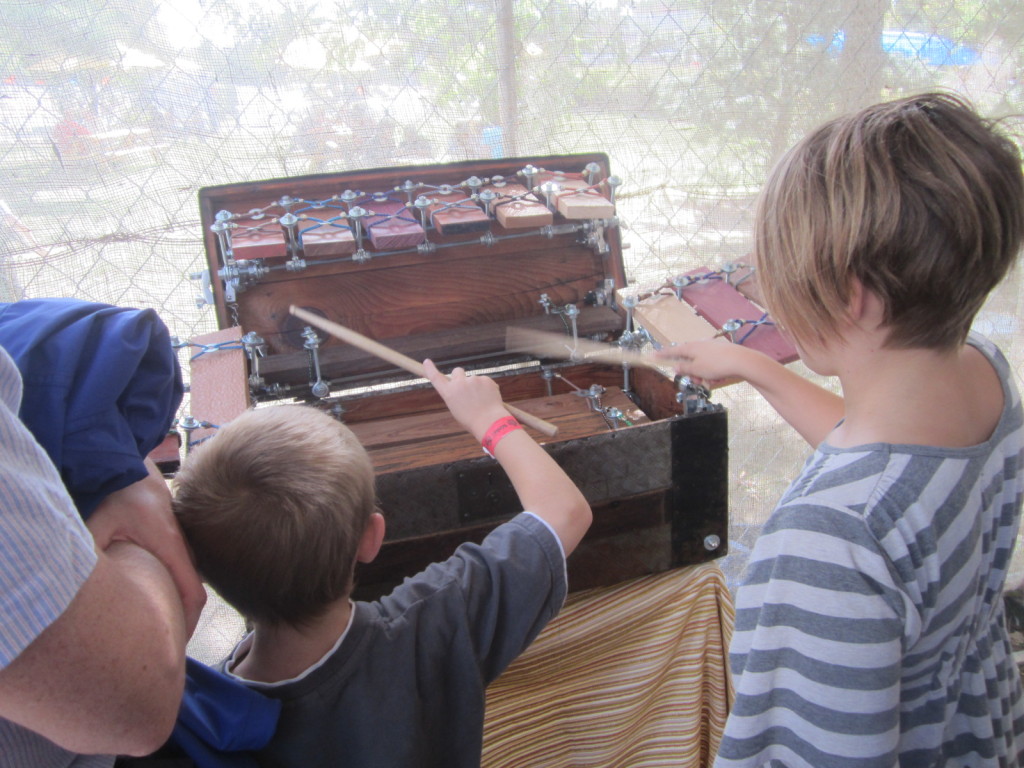 I also greatly admired Ken Butler’s Hybrid Instruments made from just about everything you could imagine. 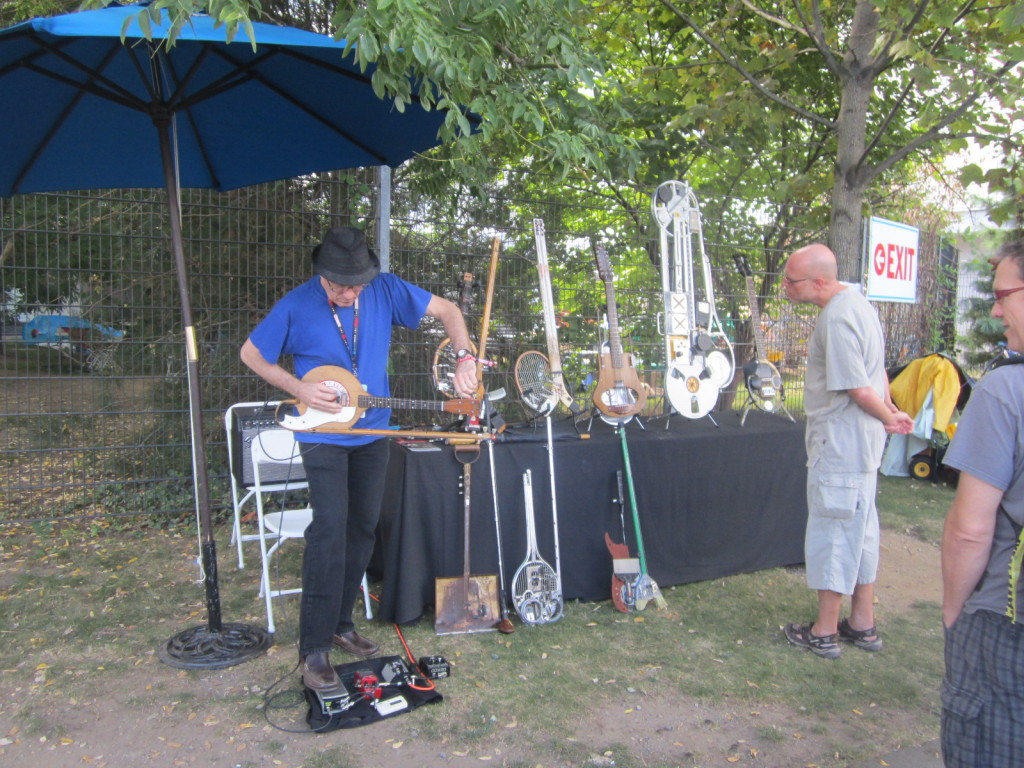 So those are the top five things I wanted to see, and I did see. Everything else was icing.

In future blogs, I will write about:

2) How I feel about this Maker Faire, when I put on my Trashmagination lens

But I figure that’s enough for you to read for now!

I’ll leave you with this very cool photo of my husband Bob that I took through a kaleidoscope made by a designer from the School of Visual Arts. That smile keeps me going most days, so what a perfect photo to have that smile over and over again! I’m so glad that Bob was willing to go to New York for this Maker Faire, even though we find travelling in New York to be stressful, and watching the kids at such a huge event is certainly not relaxing, but he did it anyway! (I think he enjoyed the sections on robots, so it wasn’t too much of a sacrifice.) 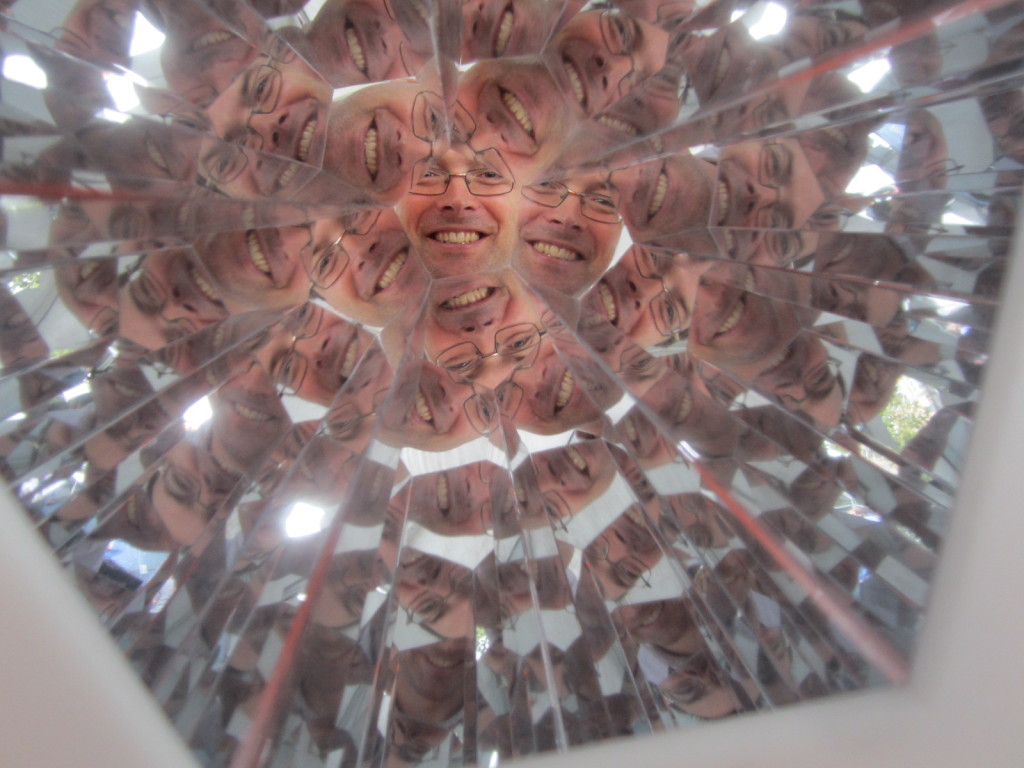 Bob through a kaleidoscope at Maker Faire NYC 2013