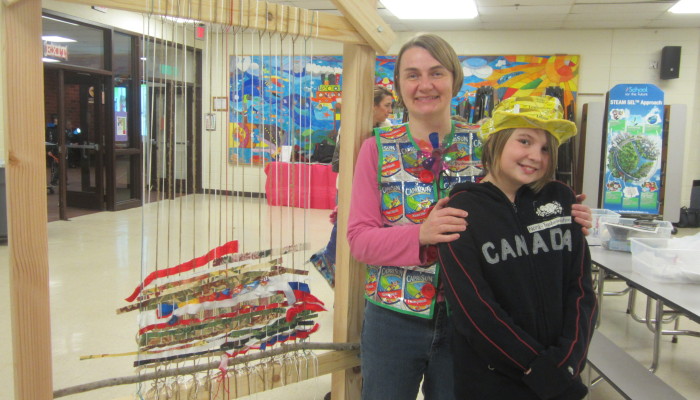 Tonight we debuted the Story Loom at the Family Science Night at Forestville Elementary. The theme of the night was waste reduction. We also had a table with many samples of Trashmagination creations.

I was very grateful to have my daughter Nora as my buddy at the event. She helped hold the pieces of the loom in place when I was assembling it.

1) Cut Strips Thin – Here Nora teaches our first participant, the daughter of the event organizer. This girl helped us to learn a great lesson right away. She was weaving fabric strips backed with paper. These are cut off from upholstery samples. They are useless for sewing, but I had not thrown them out because they are so colorful. I hoped I could use them in some kind of kids’ education project. Voila!

This little girl LOVED weaving. She wove so many strips that she half-filled the loom – and that was even before the event started! So I apologized to her, but explained that we were not going to have enough loom space for all the other kids, so I was going to take the weaving out and cut down the pieces to a skinnier width. She was very kind about it, especially when I thanked her for teaching us how to be better weaving teachers.

Once I cut the strips down to 1/2 inch wide, the weaving was more cohesive and the kids were better able to maneuver the strips through the warp. Also, our loom did not fill up in a few minutes! This will be a critical lesson for the Maker Faire, where we will have thousands of weavers, not 50 like tonight. 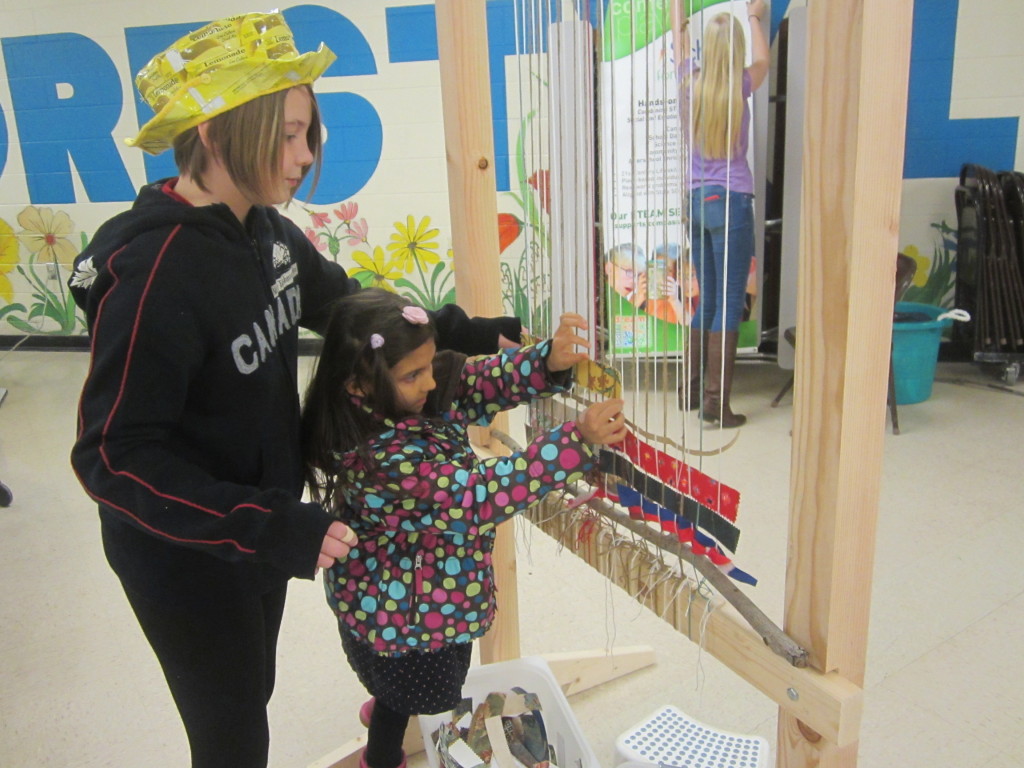 Nora teaches how to weave on the Story Loom

2) Kids Love Juice Pouch Clothing – Just like at the Maker Faire last year, the participants loved my vests sewn from juice pouches. They loved putting on the vests and then weaving on the loom. I might make more vests for the Maker Faire because the kids love it so much. 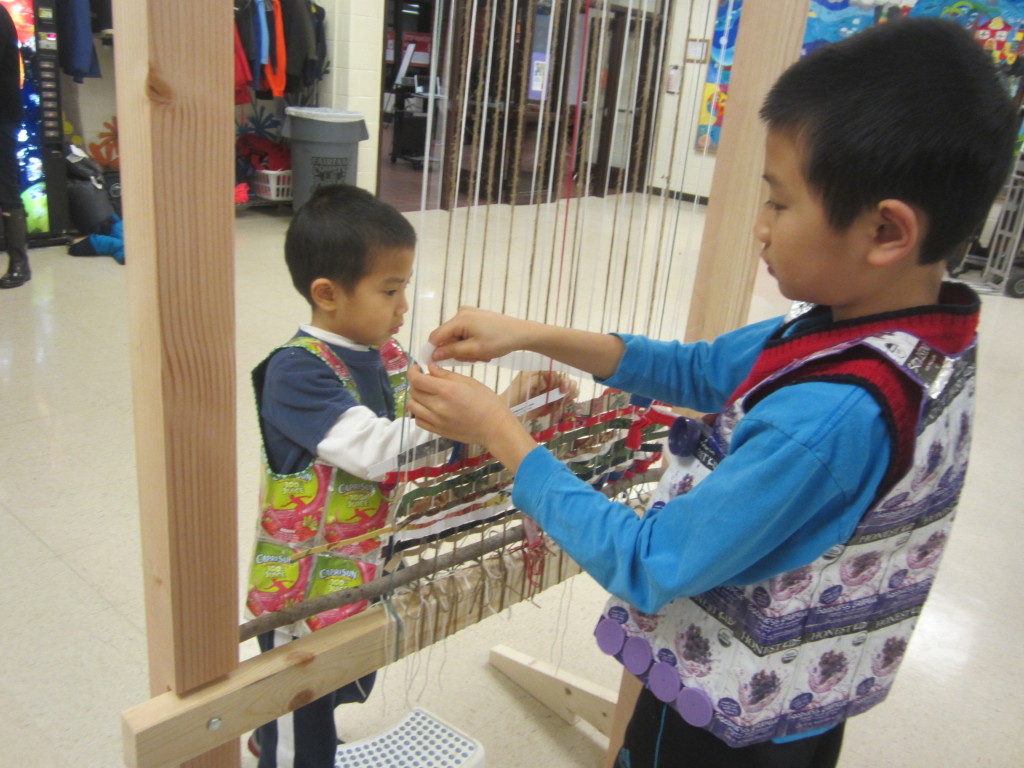 3) Reduce Chance of People Tripping – We brought step stools for smaller children to reach once the weaving got taller, and that was a great idea. I was worried that kids might trip on the feet that hold up the loom, and in fact two kids did stumble. I’ll have to think about how to make it safer for the Maker Faire – perhaps by putting items on either side of the loom to prevent people from walking sideways.

4) It’s a Good Project in terms of Managing My Energy – Every kid liked weaving and the parents seemed comfortable supervising them, so that bodes well for the Maker Faire. When the project is more “odd,” parents tend to stand back because they don’t want to get something “wrong” when teaching their child. 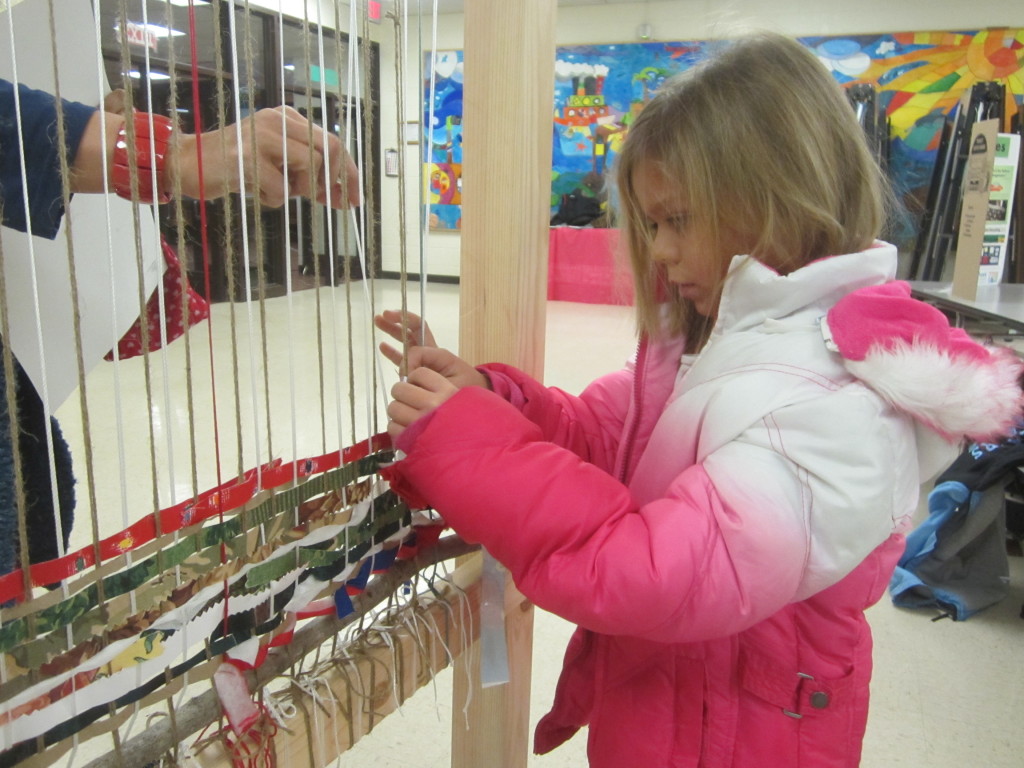 5) Adults Struggled to Understand the Purpose of It – Three adults asked, “why are you making that?” And it’s a valid question. When the weaving is done with yarn, you could more easily imagine it was a rug for example. So I explained it was an artistic wall-hanging. I noted how it’s good for kids to practice their pattern recognition, as they need to do the opposite of the woven item below, and they have to alternate threads. One man asked, “I know this is probably not a good question, but what is a loom for anyhow?” and I reminded him that looms are typically used for weaving fabric, rugs, towels and scarves, but this one is an artistic experiential tool instead. Perhaps at the Maker Faire, I could put a sign on the loom that answers the question, “Why are we making this?”

When I first experienced the Story Loom in Maine, part of the magic was that the group was asked to make the weaving for someone, and to embed in that weaving the spirit of what you wanted to communicate to that person. That really helps bring purpose to the weaving and I believe it makes the weavers more creative. I had asked the event organizers if we could make the weaving for someone, like the school, but it didn’t work out. At the Maker Faire, I’m going to encourage the weavers to make the weaving for Nova Labs, our local Maker Space, and to communicate to the hard-working volunteers at Nova Labs how much we appreciate that they cultivate a Maker culture in Reston.

6) Single Thread the Warp – To make the warp, I took each thread and folded it in half, looping it around the top bar. This is how I put the warp on my hand-held loom, as I had been taught by my teacher. But the double threads confused many kids, who wanted to go in between each thread, not each double thread. That’s a good point. I might tie the warp on differently with single threads? I’m not sure. 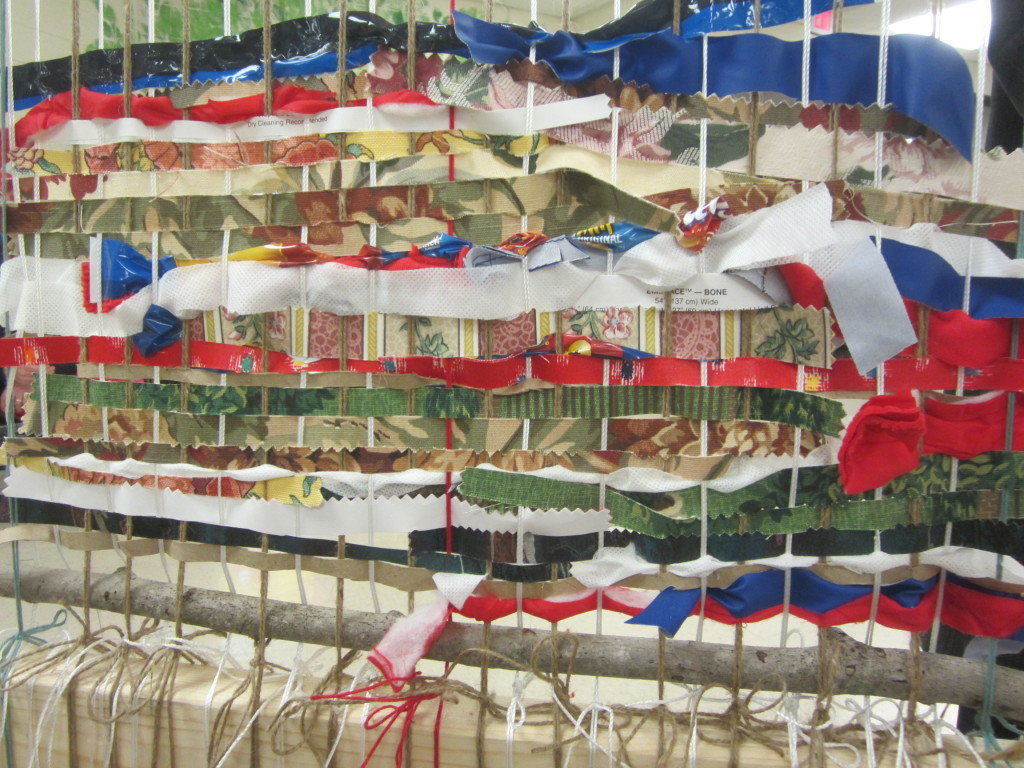 The completed trash weaving from the Family Science Night

7) Never Leave Equipment Unattended – I warned Nora to put away scissors, tape, string, markers and any other item when she was not using it because people walk away with stuff. They don’t have bad intentions – they just think the items are owned by the event organizers and not me so they view them as a free good. She was great about putting items away. However, at the end when we were cleaning up, Nora and I were carrying items to my car. When we came back, there was a five-year-old boy standing on a piece of the loom trying his best to stab his foot with a bolt. His dad was standing there looking at his phone. I ran over quickly, saying, “That’s not safe” and “That’s not your property.” It just goes to show that you really cannot leave any equipment out, even if it was pushed against the wall.

8) Put Up A Sign That Says “Items Not For Sale” – People asked if they could take my samples such as my juice pouch vest and my TrashAnatomy shark. I hope they meant pay me for them, but I’m not sure. Anyhow, I explained that these items are not for sale due to the amount of time it takes to make them, and what people are willing to pay. I had researched making the shark into a kit, but found that teachers were not interested in teaching anatomy because it is not in the standards of learning for elementary school. I also learned that most teachers would spend only $10 for such a kit, which would make it not a viable business.

9) Parents Are Willing to Sign Image Release Forms – When I took photos of kids at the event, I had a parent sign a release form. I was worried that would make things too formal, but I really just want to make sure they don’t get upset when I put up their kids’ photos. Every parent was super great about it – thanks parents!

10) Weaving Supplies Go a Long Way – I had prepared quite a few weaving supplies and we went through probably 1/10th of what we prepared. This helps me gauge how much I need to bring to the Maker Faire – a lot less prep work than I imagined.

12) The Story Loom Fits Into my Honda Fit – The longest pieces are seven feet tall, and they fit into my car with inches to spare when I push the front seat down and half the backseat down. One of the reasons why I like the Honda Fit is because you can fold down just half the backseat, and it folds super flat. That left a space for Nora to sit in the backseat. We wrapped a camping sleeping pad at the end by the dashboard in case the loom slid forward if I had to brake hard. Then we put our baskets of weaving materials and Trashmagination samples on top of the loom and in that small gap behind the back seat.

How the loom fits into my Honda Fit 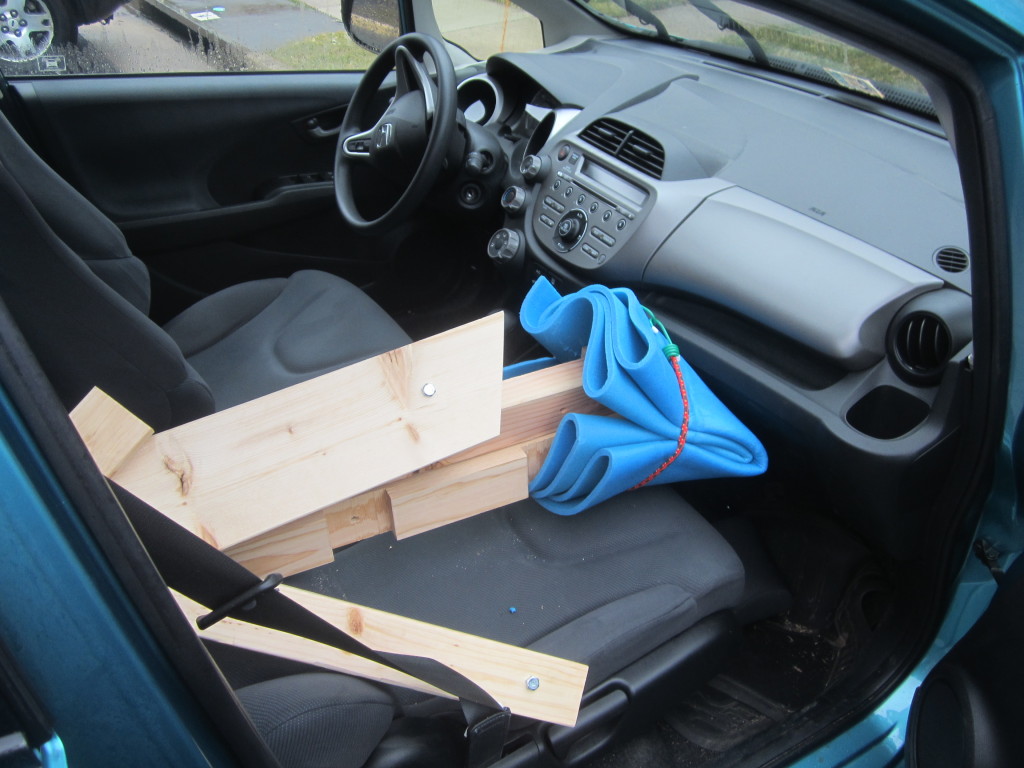 Protecting my dashboard from the loom with foam

The event had a lower attendance that predicted because it was snowing during rush hour. But that was fine because I could spend a longer amount of time with each family and take a break for a snack now and then.

Nora LOVED the event, and kept telling me how happy she was. She observed that when I show Trashmagination items, I always ask questions. I usually ask, “what do you think this is made of?” or “how do you think this was made?” and give them clues if they really can’t imagine. She said that she thinks this helps them learn more, helps the ideas stick in their heads. And I said, “Thanks Nora! Did you give it a try?” and she said, “I felt like half the time, I could not find the right words.” So I said, “That’s why you ask questions. Then the participants can be in charge of finding the words.” She was so helpful and kept hugging me. I felt very lucky she came. When my car is filled with the loom and weaving supplies, I can only fit one more person in there!

My favorite part of these events is watching how kids figure out the patterns in how Trashmagination items are made. When I show the first milk jug item, they can’t figure out it’s made from milk jug plastic. But when I show them the second one, they now have that in their vocabulary as a possibility. I also show them how I construct things by drilling holes and tying them with string instead of glue. They get more comfortable flipping things over and really thinking about it. I love watching their faces during that process. I really love talking to adults too. I appreciate that parents are trying to let their child take the lead in the conversation. But I love the level of conversation when I get to talk with the adults without kids.

I handed out my brand new business cards and people seemed to enjoy that they were on recycled maps! I hope everyone likes Trashmagination on Facebook! Thank you to iSchool for the Future for inviting me to participate. 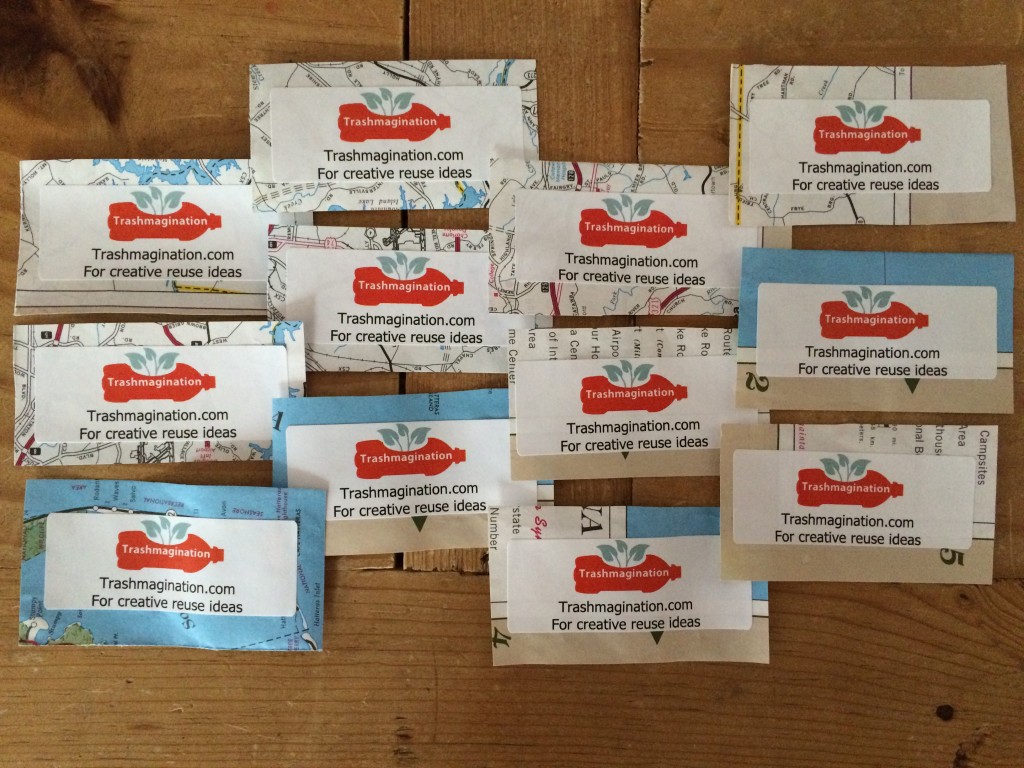 Business cards made from recycled maps