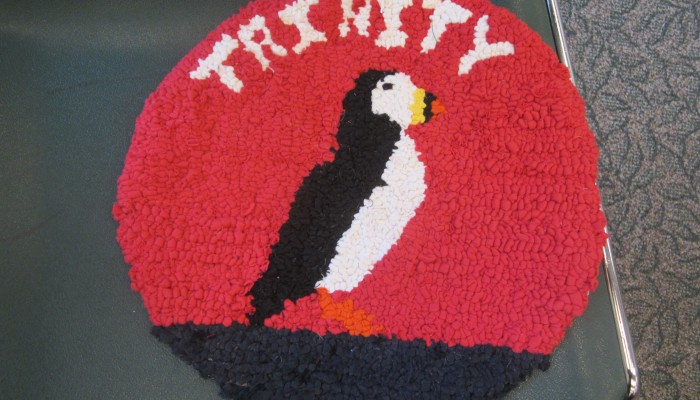 Two things you must know about me:

Now in general, I find that most Americans are not familiar with Newfoundland or hooked rugs, so when people learn these facts about me, they often look like, “I have no idea what this person is talking about.” So you can imagine my DELIGHT when I went to my rug hooking guild meeting this Sunday and the guest speaker was talking about rug hooking in Newfoundland.

The speaker, Betty Hill, is American. She and her daughter Sara have been to a lot more places in Newfoundland than I will probably ever see. They first went to Nova Scotia, which all rug hooking enthusiasts know is Mecca for our craft. But amazingly, they continued their journey on to Newfoundland, which is a big trip. It is such a big trip that I have yet to bring my husband or children there, and I have been with him since 1990.

Betty and Sara did such a lovely job explaining Newfoundland or Newfie culture to the ladies in my guild. They are clearly in love with my province. However, I must tell you that it felt completely weird to have someone talk about my family’s culture like it was an eccentric tribe on a far away island. She described mummering (like Halloween on New Year’s Eve), ugli sticks (a musical instrument made from a broom, a boot and beer caps) and tried to describe a typical Newfie sense of humor.

Is it my personality, or something I was taught?

She described how Newfies approach rug hooking. She noted that Newfies do not like to follow patterns – they like to draw up their own rugs. I find many women in my guild prefer to buy patterns. I must admit, I have been quite snobbish about this. I always draw my patterns but I thought it was my own stubborn nature, not because I was a Newfie!

She noted that Newfies “will hook with anything” including t-shirts, silk stockings and – gasp – burlap. The people in my guild think burlap is a very low-grade thing to hook with. Honestly, I didn’t realize you could hook on something else until I started reading books about hooking and meeting other rug hooking folks.

When she said all this, I started to realize that things I thought were “Carla Brown personality” might actually be cultural, even though I didn’t grow up in Newfoundland. I only lived there until I was a toddler then moved to various provinces across Canada. And while my great-grandmother hooked rugs, I only visited her infrequently as a child, and she never showed me anything about hooking. My mother, sister and I hooked one rug when I was a kid, on a whim, but we actually had no idea what we were doing.

So how did these distinctive Newfie hooking traits come to me? It’s an interesting thing for me to ponder further.

Another part of the presentation that I loved was about the Grenfell rugs.

From 1892-1940, a Dr. Grenfell traveled providing medical attention to folks in remote villages (called outports). He came up with the idea of bringing in donated silk stockings to Newfoundland women so they could hook rugs and supplement their income, which was basically poverty. Women from across North America and Europe mailed silk stockings to the cause. The slogan was, “When your silk stockings run, let them run to Newfoundland.” They devised kits and standards, including a distinctive 100% horizontal hooking style. There is actually a stained glass window at the National Cathedral in Washington DC with a portrait of Dr. Grenfell because his mission was so well known. I must go see it!

Anyhow, I started wondering if the rug that my mother-in-law Marilyn gave us was a Grenfell, because it does have horizontal hooking. She gave us a letter from the rug hooking artist as well. The rug is 70 x 50 cm. 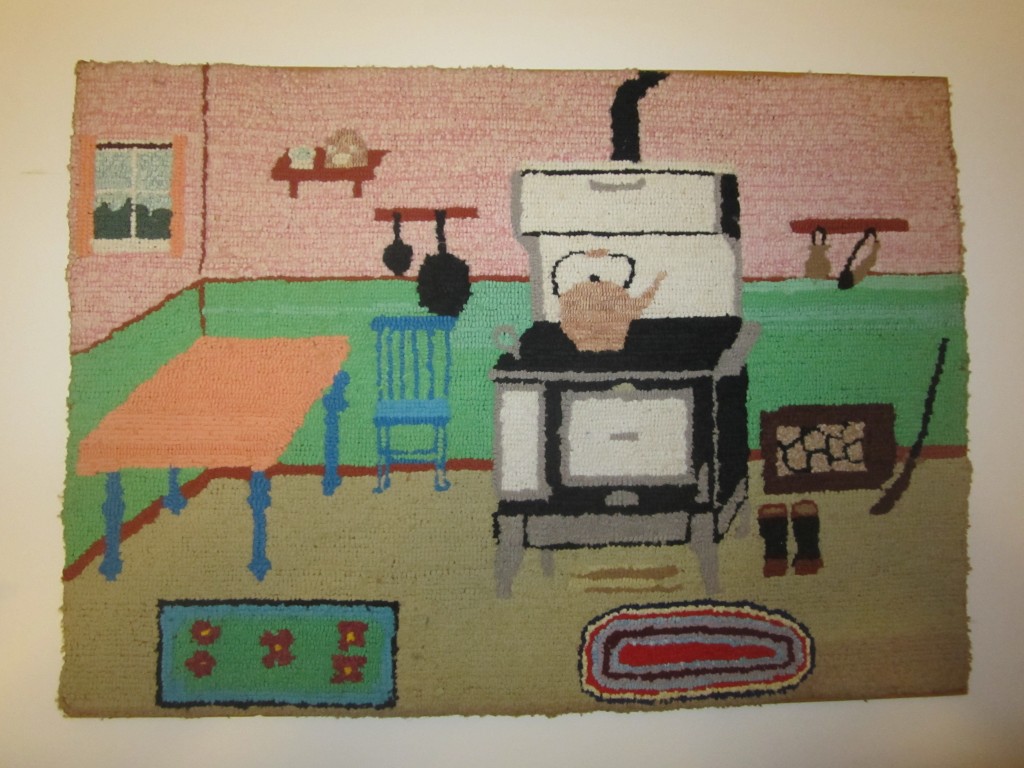 Our Newfoundland Hooked Rug – the letter has a woman’s name – Loretta Smith, but I’m not sure if she made it

I have loved this rug since the day I saw it. I was a teenager. Bob and I were just friends. I went to visit his house. When I walked into his kitchen, it was the first thing I saw. I immediately freaked out because it was a hooked rug and it reminded me of my great-grandmother’s kitchen. At least that’s how I remembered it, but I have since looked at photos, and in fact everything in her kitchen was white. It was the dining room and other rooms that had lovely colors like the ones in this rug. Bob’s mother obviously remembered my reaction because a few years ago, she gave it to us and now it hangs in our kitchen.

Here is the letter that she gave me only recently, from the Placentia West Development Association: 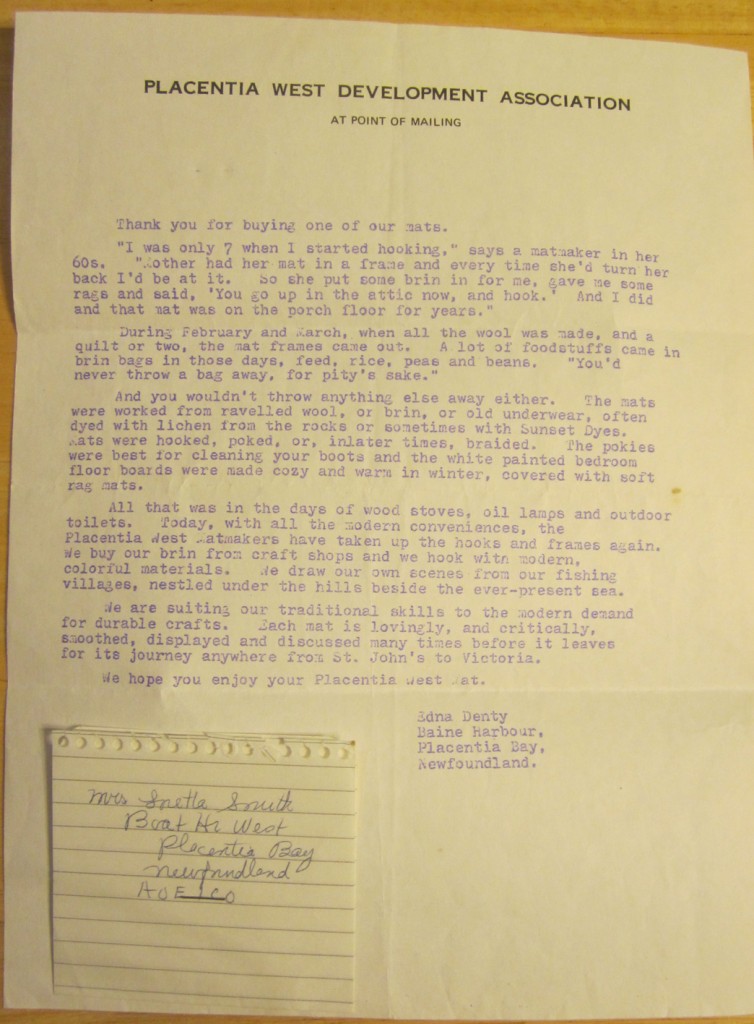 Placentia West Development Association letter from rug hooking group – I wish it had a date on it!!

Betty was selling a book made by the rug hooking guild in Newfoundland. It has photographs of historical rugs and of course I bought it. The funds will go back to the guild. It’s called Hooked Mats of Newfoundland and Labrador: Beauty Born of Necessity.

If anyone is wondering what to buy me in future, there is another book about the history of Newfoundland rug hooking called Silk Stocking Mats: Hooked Mats of the Grenfell Mission, available for $40 Canadian or $50 American – the first book I ever saw that cost less in Canada!

Thank you Betty and Sara Hill!

I loved their presentation so much, and it gave me a whole bunch of ideas for rugs I want to make. Plus it made me think about how much of Trashmagination is because I am a Newfie, at least in my genes, if not in my daily life.

Also – check out my new blog about my family’s comic book, with a page dedicated to the care of hooked mats (hooked rugs).