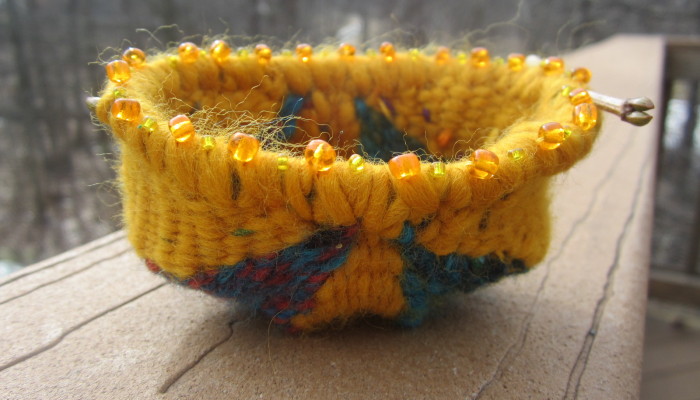 This woven “receiving bowl” is my third homework assignment for my Weaving a Life coaching.

How I Made My Receiving Bowl

The bowl starts by tying on a warp with 25 threads. The largest thing I ever made before was 9 threads, so it felt like it took forever to tie this warp. It’s hard to imagine how long it takes to warp a loom that stands on the floor! It took me an hour to put on the warp for this little bowl.

I wish I took photos while I was weaving it so you could see how it comes together. You first weave five almond or leaf shapes on the warp. It took me about two hours to weave the five shapes, backtracking a few times when I realized I made mistakes.

Next you take it off the loom and pull on the warp threads until it comes together into a bowl. At that point it looks totally messy with warp threads flying in all directions, and I was kind of stressed that it was not going to work out. But you tie off the threads close to the weaving, then sew them down into the woven bowl. It is amazing how much you can shove down into the weaving and you don’t see it from the outside.

At that point, I did not love my bowl. Along the top of the bowl were all these multi-colored warp knots. They looked like stitches on a wound to me. I was frustrated that I spent all that time and didn’t love my bowl. And so I did not take photos of it then either.

But there was another step which was to get a twig to provide structure along the rim of the bowl. When I started adding the twig, I decided to sew it all around so you could barely see the twig, and it also covered up all those warp thread knots. But I decided to leave some of the twig sticking out because it’s like a “truth window” on a straw bale house. I want you to know there is a twig in there. And this twig had some nice buds on it because it is still winter. Buds are such great symbols of potential.

Next I decided to sew the beads around the top. I love the way they stand at attention, small and large, orange and yellow. They represent alertness, openness, excitement. And when the sun shines through them, they sparkle with joy. 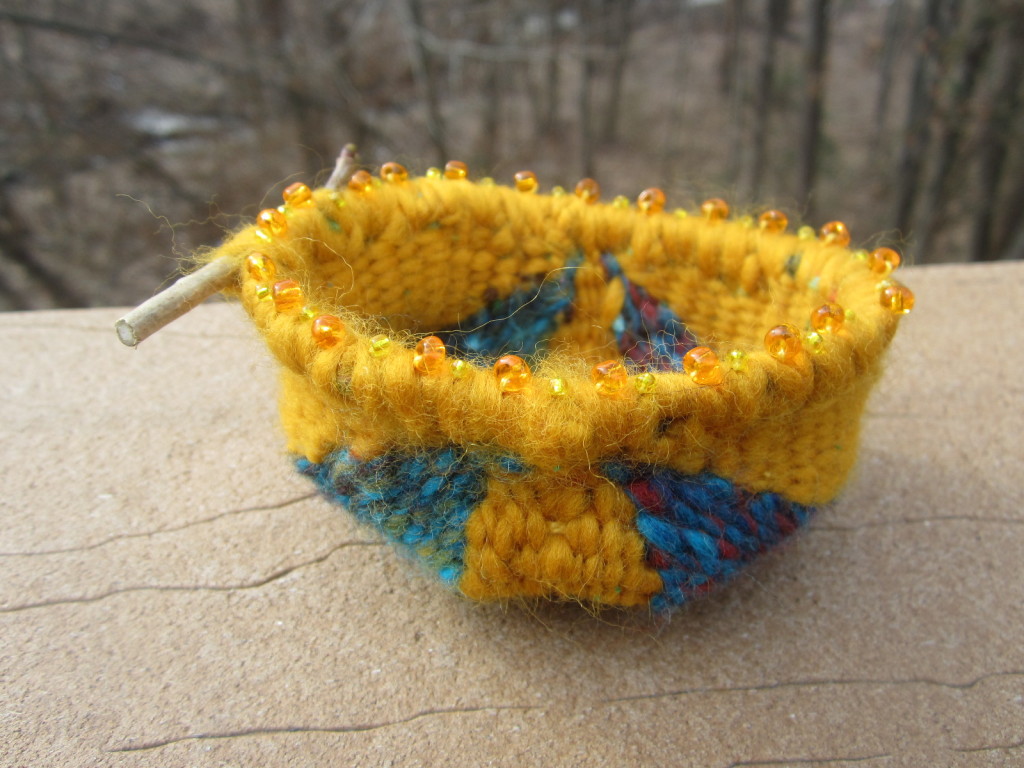 Finally, my bowl was not sitting nicely on a flat surface, and I know it does not need to do that, but I wanted it to do that. So I decided to make a little bump in the bottom, and sew in a big red bead. This bead is similar to the red thread on the warp. It represents being centered and focused. I like how it is hidden and yet provides stability to the bowl. 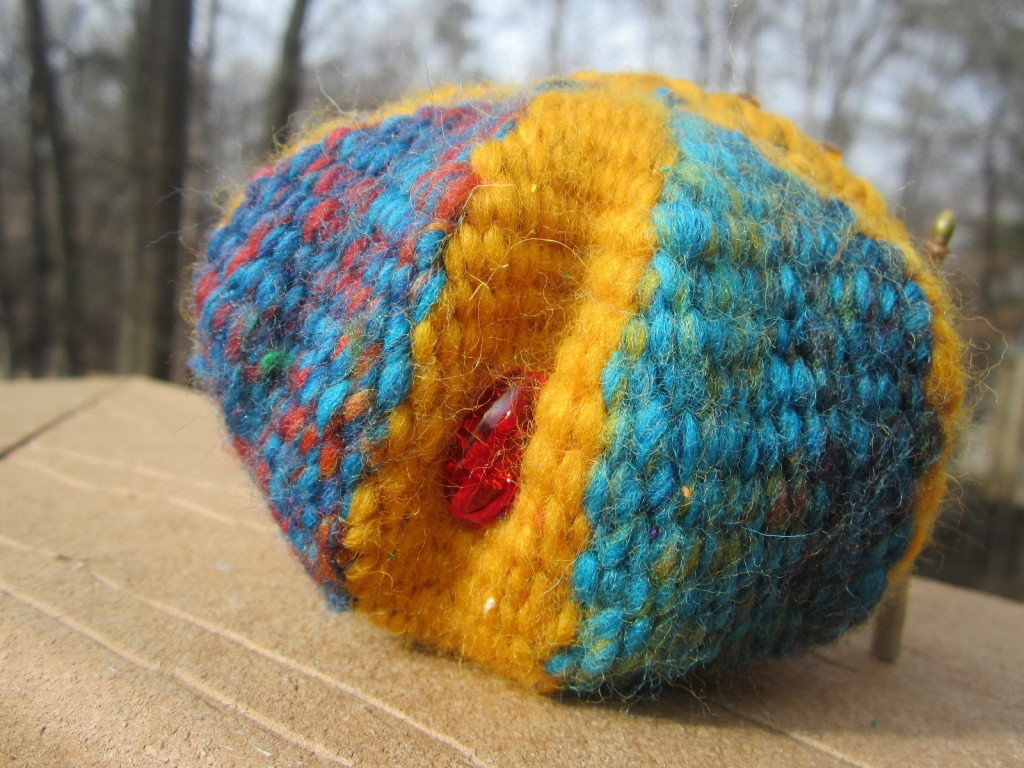 I chose orange-yellow yarn and beads because orange represents positive energy and yellow represents abundance to me. I want this receiving bowl to represent that I am open to the options. I have decided to call it my “Receiving Bowl of Yes.” It represents my state of mind right now, which is saying yes to 100 new experiences. Within the past month I have tried so many new things, and said yes even if I was not sure it was a sustainable choice. Just this month, I have started weaving, guitar, tae kwon do and Nia. I continue to do Taiko drumming. And I’m really enjoying taking classes with the kids, and seeing them try new things too. 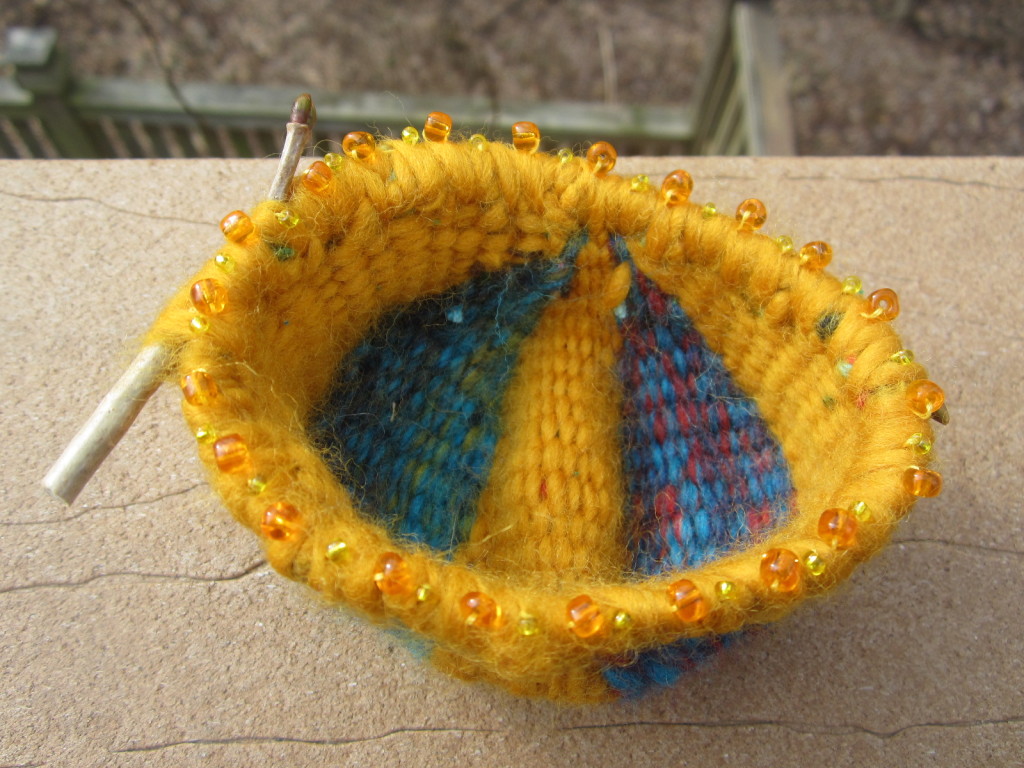 Woven receiving bowl from the top

What I Learned While Weaving

My key lessons I learned from this bowl are:

Cherish each step of the way – Take photos even if I’m not sure it is going to turn out. I can’t go backwards and remember the moments of doubt, but they would be satisfying to look at once the good outcome is won.

Enjoy making, even if it is not from trash – Throughout this project, I was trying to figure out how I could incorporate items from trash because Trashmagination is such an important passion for me. But this time, I just could not find that inspiration. And that is okay because it is beautiful as it is. It uses beads that my mom gave me and yarn that Nora picked out. I love making things from trash, but that should be a source of inspiration, not frustration. I am just learning how to weave a bowl, so I want to make it a simpler way for now. Some day I am sure I’ll weave a receiving bowl using recycled items.

This is a moment of Yes – For the past year, I have struggled to decide what the next steps in my life should/could be. And many times, the voice in my head talks me out of one route or another. This month, I decided to just try lots of things that I always wanted to try. These were in smaller decisions related to how I spend my leisure time. But in the past, I might have said no because I didn’t want to over-tax our family or my personal energy resources. However, I have learned this month that if I never reach exhaustion, I will never know what I could have done. Right now I am studying to attend a course in Innovation Engineering, and the founder Doug Hall often quotes Ben Franklin’s quote – “Up, sluggard, and waste not life; in the grave will be sleeping enough.” And that has been my attitude this month, even if it sometimes seems like I am saying Yes too much.

Hooray for the Receiving Bowl of Yes! 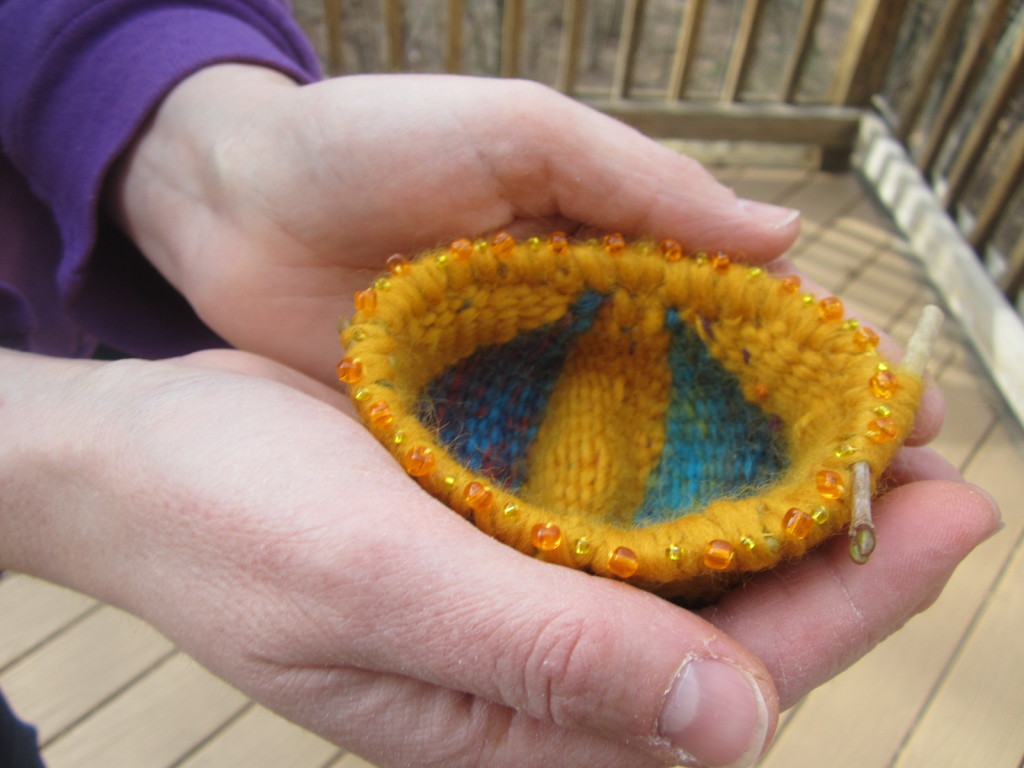 Woven receiving bowl in my hands