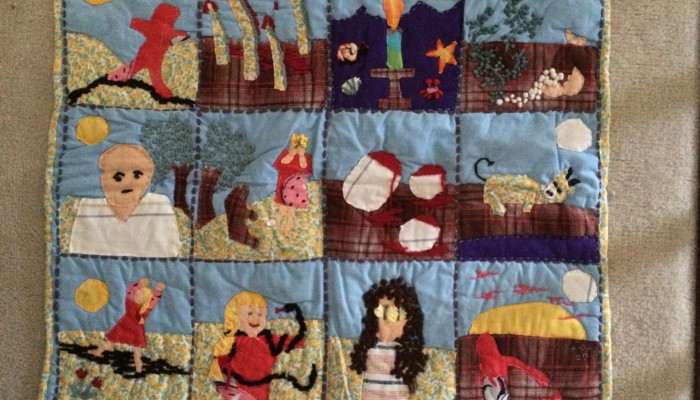 When I made my first quilt in 1989, I was attending Pearson College. For my art class as part of the International Baccalaureate, I needed to produce a body of work. I quickly gravitated towards fiber art since no one else in my class was doing that. Most were doing painting, drawing, photography and sculpture. I walked forty minutes to the nearest bus stop and took a bus to the nearest secondhand store. I bought fabric and started sewing.

My First Quilt – When I Was Walking

My very first quilt is the one shown at the top of this blog. It was based on a poem I wrote called “When I Was Walking” which is not a very well-written poem, so I won’t put it here in the blog. I had six types of fabric with scraps of felt and yarn. It is very poorly constructed by any quilting standards, but I was determined. There was no internet, no Pinterest, and no quilting books in my school’s library to learn quilting skills. I lived in an isolated community. But I had a vision & went with it.

The next quilt I made was on the back of a jacket. It was a portrait of my high school friends who were back in Nova Scotia while I attended school in British Columbia. Here’s a photo of us after our prom: 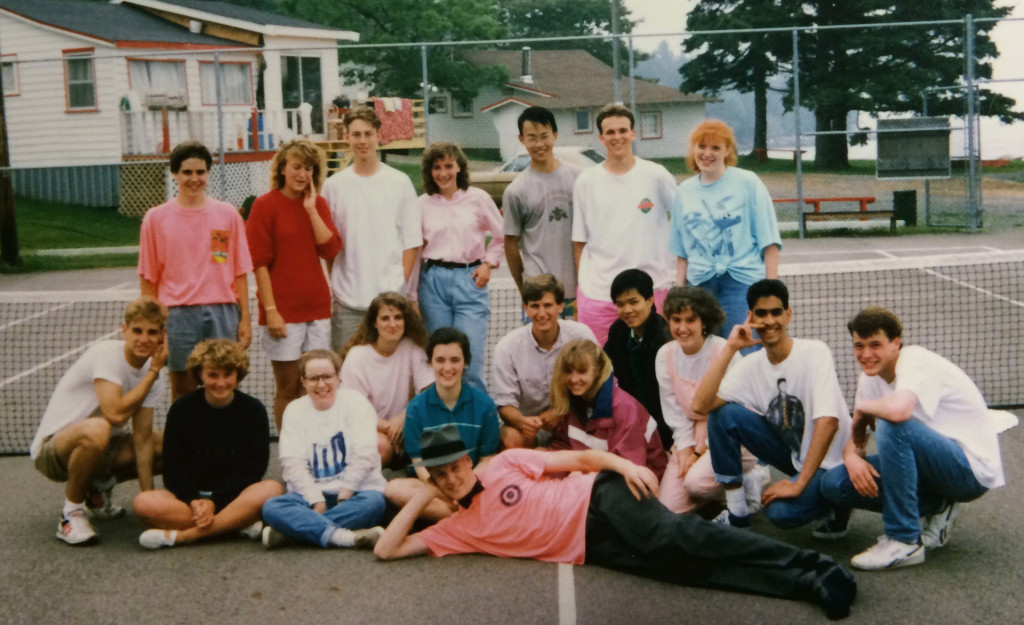 That’s me, 2nd from the left sitting down with the curly hair. I had many perms back then. Way over on the right is Bob, my husband. My prom date is that guy laying down, Graham. They are a great bunch of people and I’m in touch with most of them still (especially Bob, ha!)

So I sewed this on the back of a jacket: 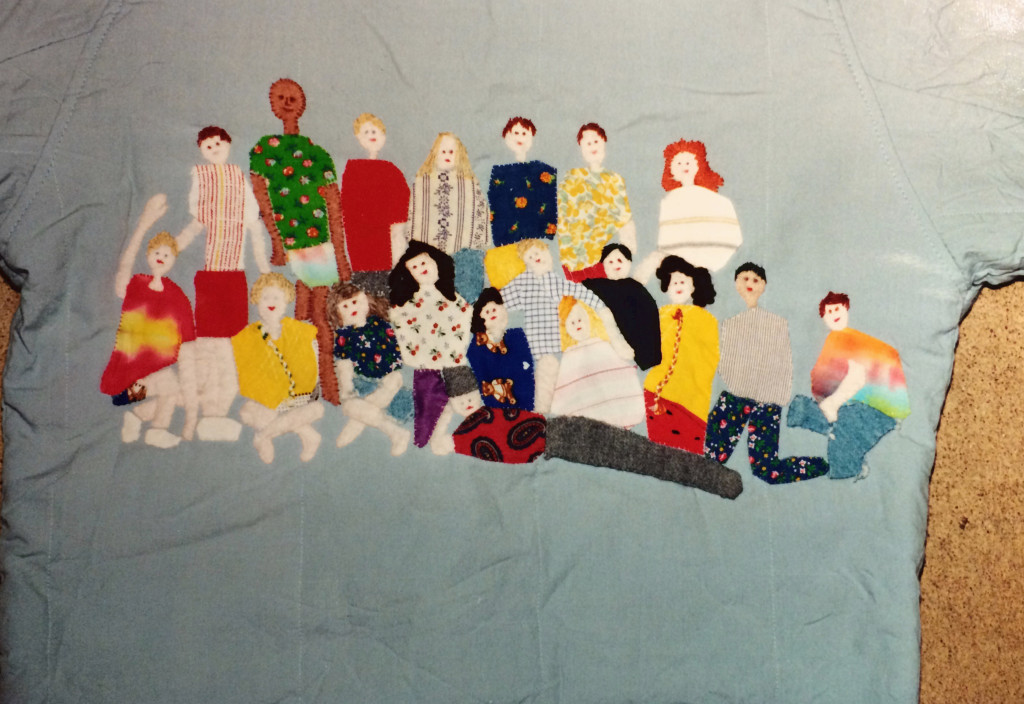 Bob looks very fat in this quilt – which is funny because he was so skinny! I just loved the tie dye fabric I used for his shirt and didn’t have the heart to cut it. I know, that’s a very odd reason.

This was another quilt inspired by a poem I wrote about the Gulf War. It’s a very long poem, I’ll put the first few lines:

This is an underwater book
This book has travelled through all ancient ocean passages
Accompanied by silver mirrors of fish and globes of painted oil spilled  on pavement
This book has been farther than you.

The quilt is very tall – two stories high, and about a meter wide. My goal was to hang it from the ceiling in the common room at my residence which had a cathedral ceiling. The top two panels show an evergreen tree like the very tall trees that surrounded Pearson College. The bottom two panels show a person made from many patches of fabric. In the person’s body are two panels of fabric where the poem was sewn. 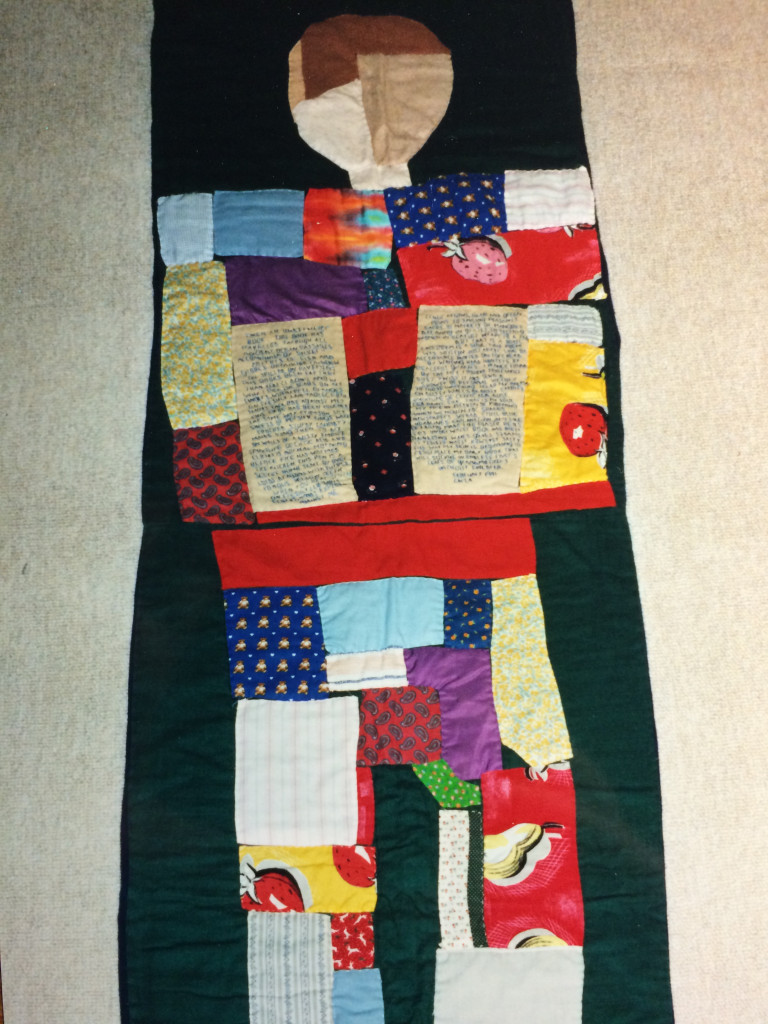 This quilt aims to show all 200 people who attended Pearson College in 1990-1991, including many teachers. The people are often shown doing the activities that they loved to do the most, including Ukrainian dancing, kayaking, hanging out at the Common Room, driving the Uba Tuba (our boat), driving in a van to a service project and climbing. In one section it shows everyone in my English class having a class outside. Now you might look at this quilt and say – really? It looks like kind of a big mess. And I suppose that is true. But it’s all very clear to me :). 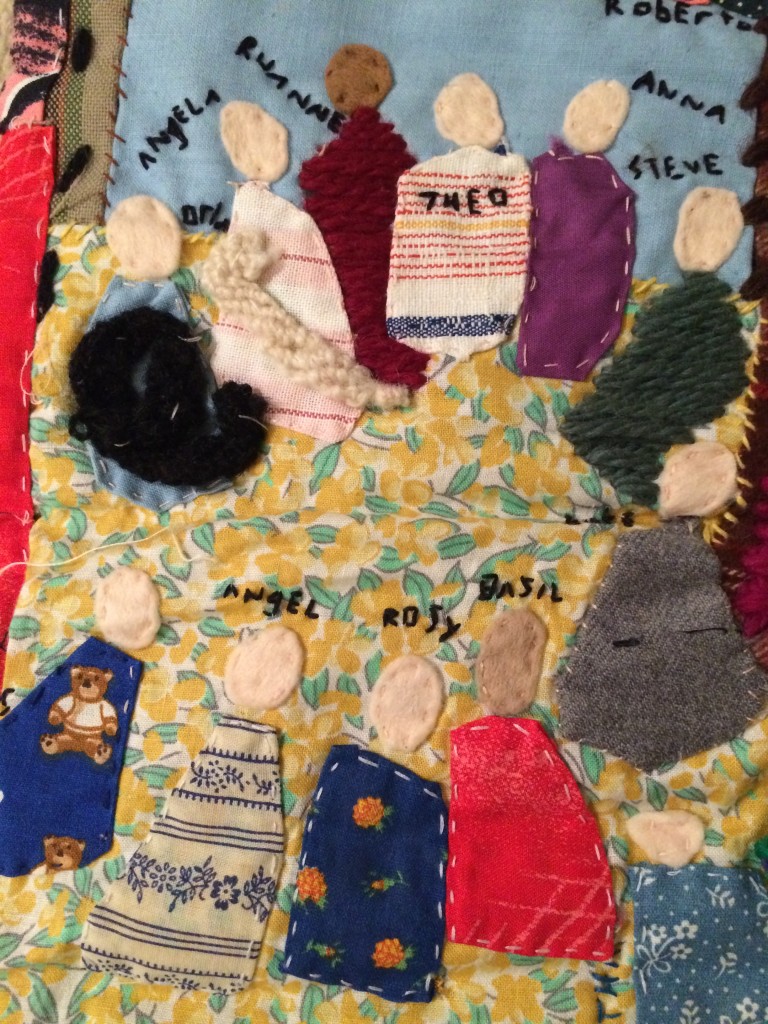 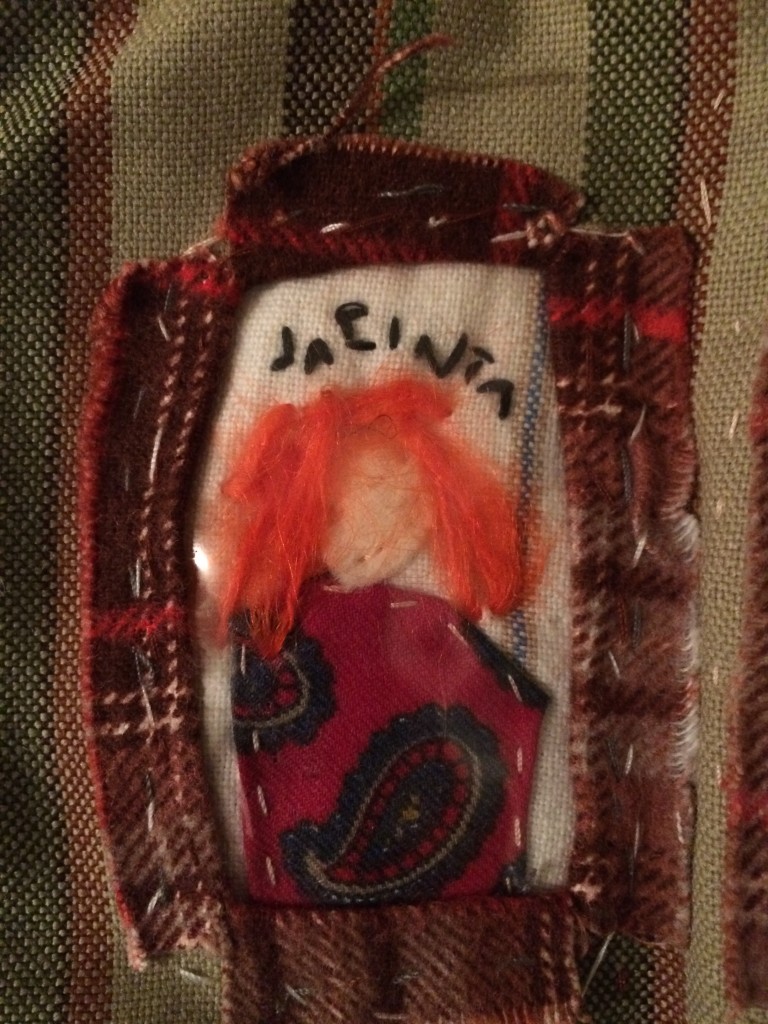 Jacinta in a window made from a plastic bag 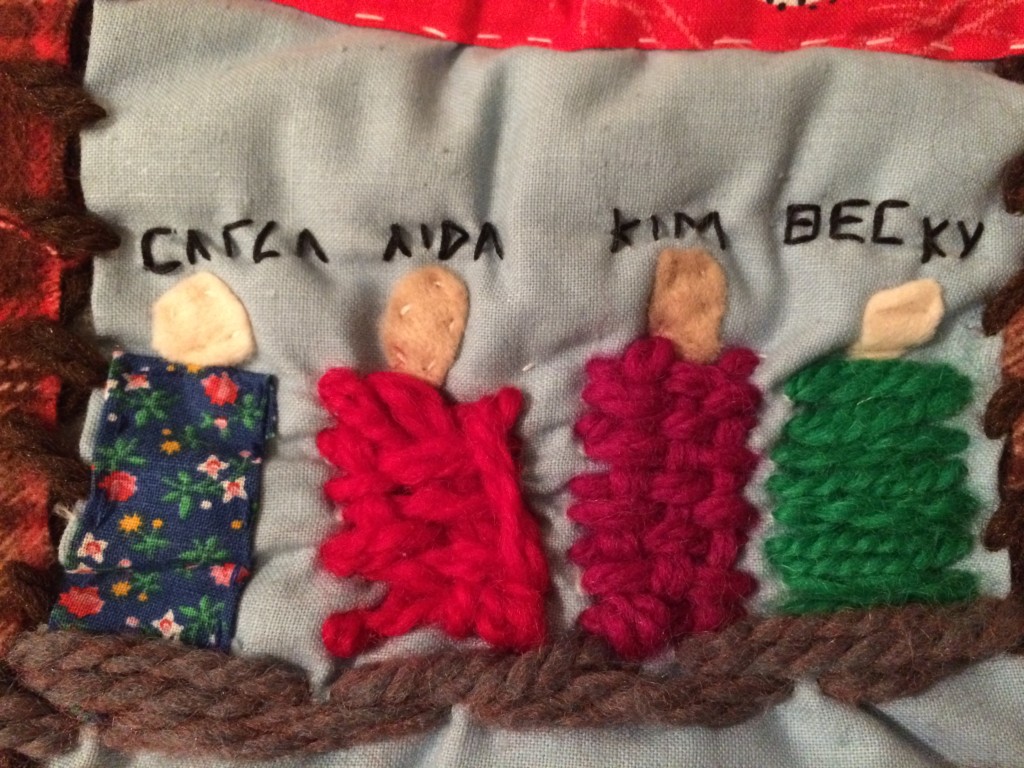 Me and my roommates – Aida, Kim & Becky 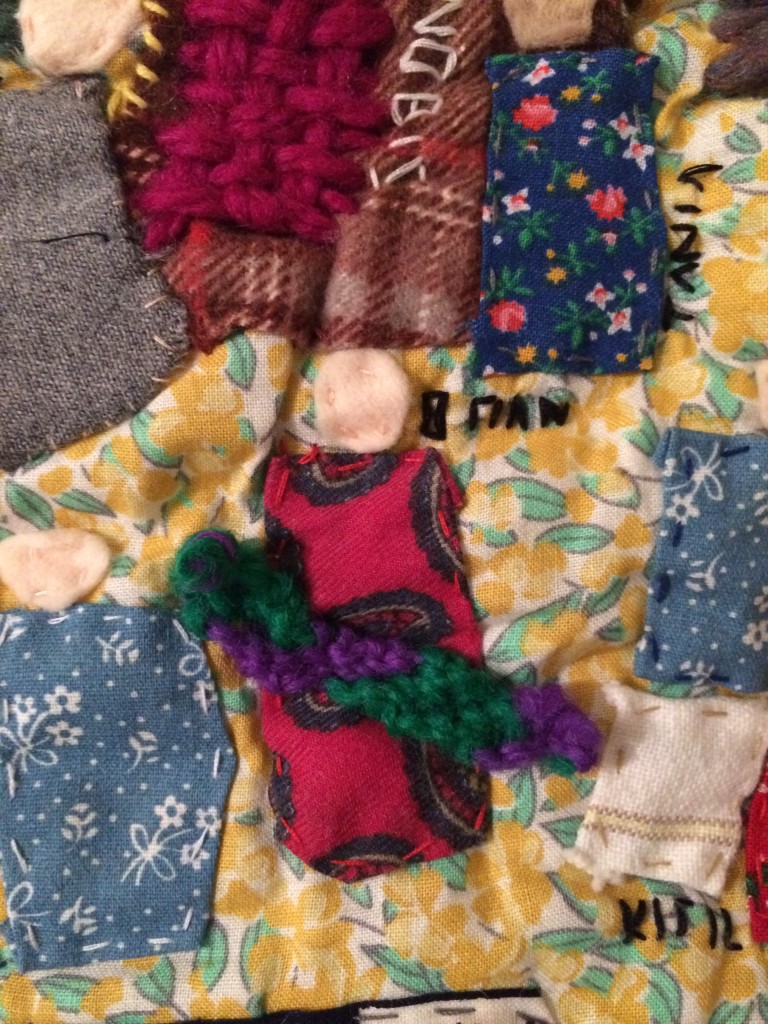 Brian with his knitting in Higher English

Thanks to Brian for asking me for a photo of this quilt! His request actually inspired me to write this blog after digging out this quilt & finding all five!

The first four quilts were made in British Columbia at Pearson College. This one was made at Trent University. After two years of living in a very intimate setting with 200 people, I felt lost at Trent. So I made this quilt so I could sew all the names of the people from Pearson, along with from Nova Scotia. I kept adding names during my years at Carleton and my first few years living in the United States.

This quilt started the same way as the ones at Pearson – with a trip to a secondhand store to get fabric – so that’s why there are only four colors. I had no fabric stash like I do today! 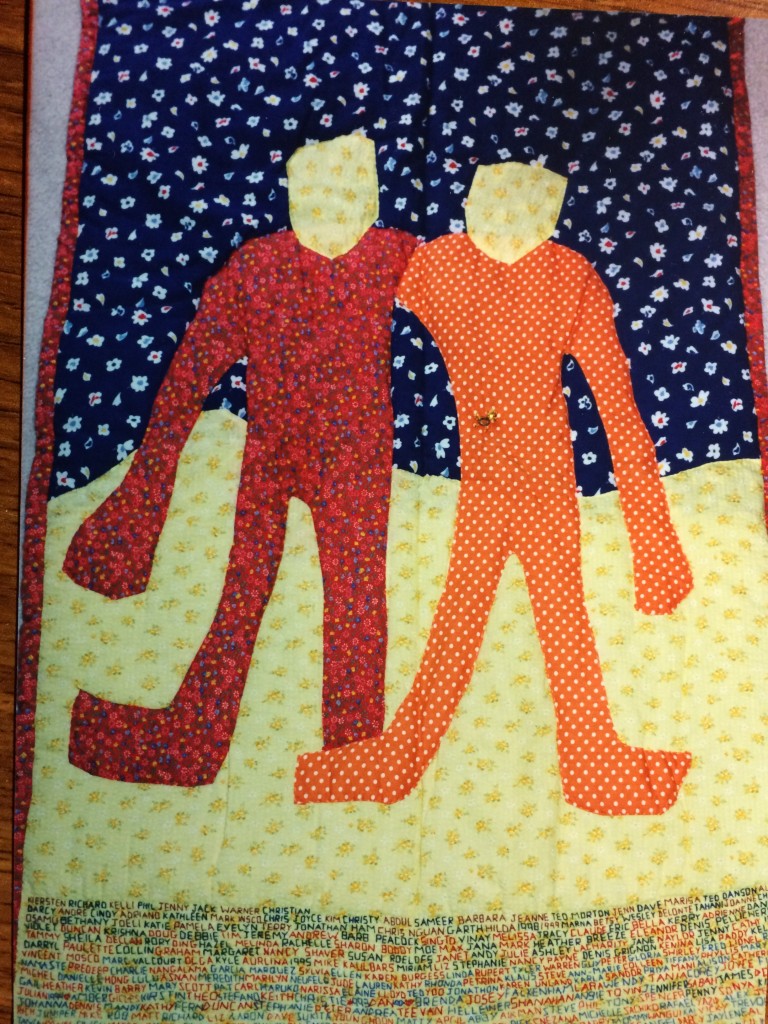 During my three years at Trent, I sewed 11 quilts, but those will have to wait until a future blog. It was not until I had sewn about 20 quilts that I met other quilters and learned proper quilting techniques. So these quilts are all very odd, entirely hand sewn, mostly recycled fabric and done without any formal class. They are definitely odd little creations! But they were an important part of my Trashmagination journey.